How gas prices have changed in every state in 2022 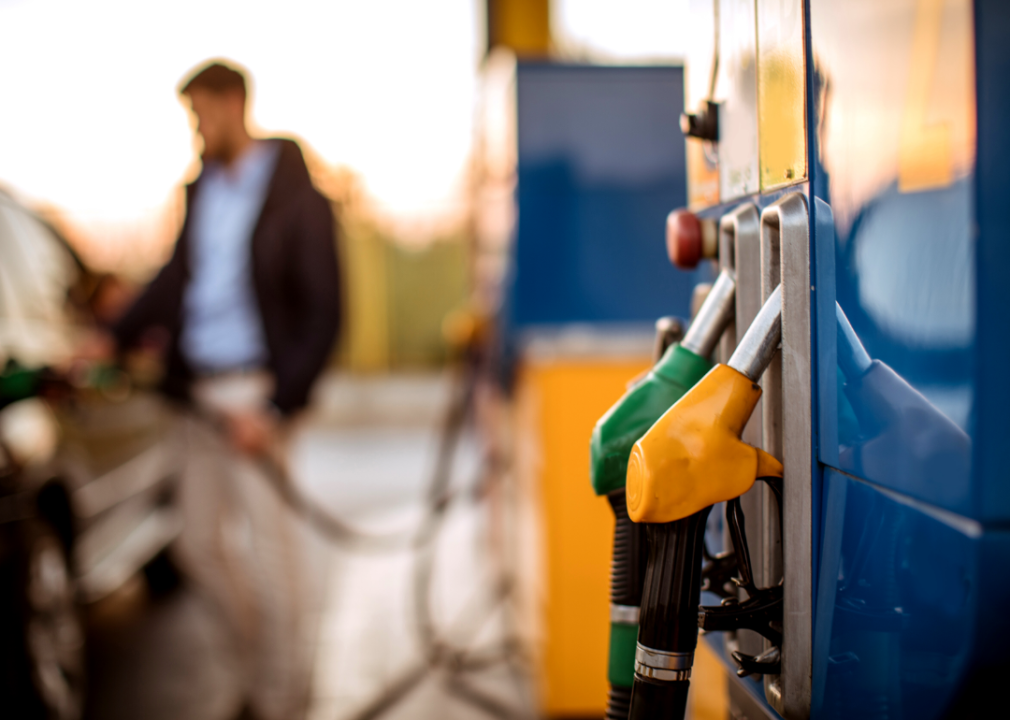 How gas prices have changed in every state in 2022

The national average price for a gallon of regular gasoline broke records repeatedly during the first two weeks of May, according to the American Automobile Association. AAA is a privately held not-for-profit national member association and service organization with more than 60 million members in the United States and Canada. Its nationwide survey on gas prices found that, as of May 16, 2022, nearly every state has passed the $4 per gallon price.

Gas price fluctuations—up 30.8% per gallon in the U.S. from one year ago—are felt on a personal level, but they’re often influenced by sudden events and major policy shifts across the country and world. Natural disasters like hurricanes that shut down refineries along the Gulf of Mexico—where roughly half of America’s crude oil is processed—can drive prices up almost immediately. As during the First Gulf War with Iraq in 1990-91 or with Russia’s invasion of Ukraine in February, military conflicts involving oil-producing countries can also cause ripple effects worldwide.

The cost of crude oil, set by global supply and demand, is the country’s most significant determinant for gas prices. Currently, high seasonal demand, rebounding travel in the wake of COVID-19 restrictions, weak domestic output, and international sanctions against Russia—a massive player in the global oil market—are all contributing to ever-increasing prices at the pump.

Route-planning app Routific examined AAA data to see how gas prices have changed in every state over the past year, including in our nation’s capital in response to global events. States on the East Coast have seen the most painful price increases at the pump. 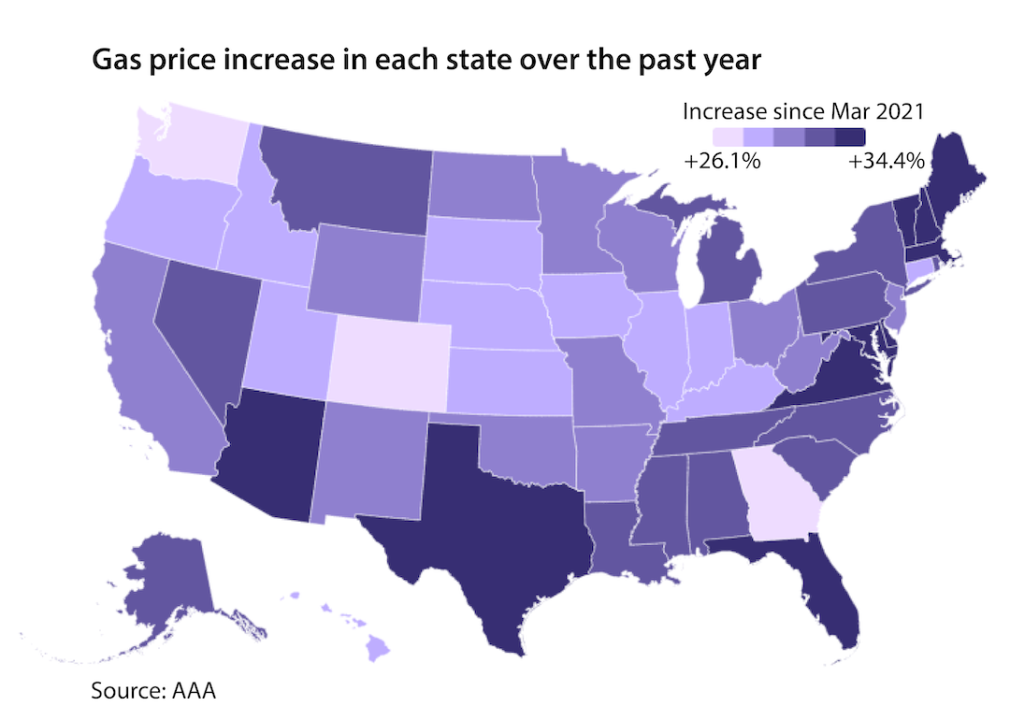 Price increases occurred across the U.S.

Every state and Washington D.C. saw gas prices increase over the last 12 months. While the national average is well above the $4 mark and hovered closer to $4.50 in mid-May, major cost discrepancies exist between states and within state borders. Living close to a regional oil hub can keep prices down. Meanwhile, living in a state with high fuel taxes like California can add up at the pump: Drivers in the Golden State pay 51 cents per gallon compared to those in Texas, who pay 20 cents per gallon. 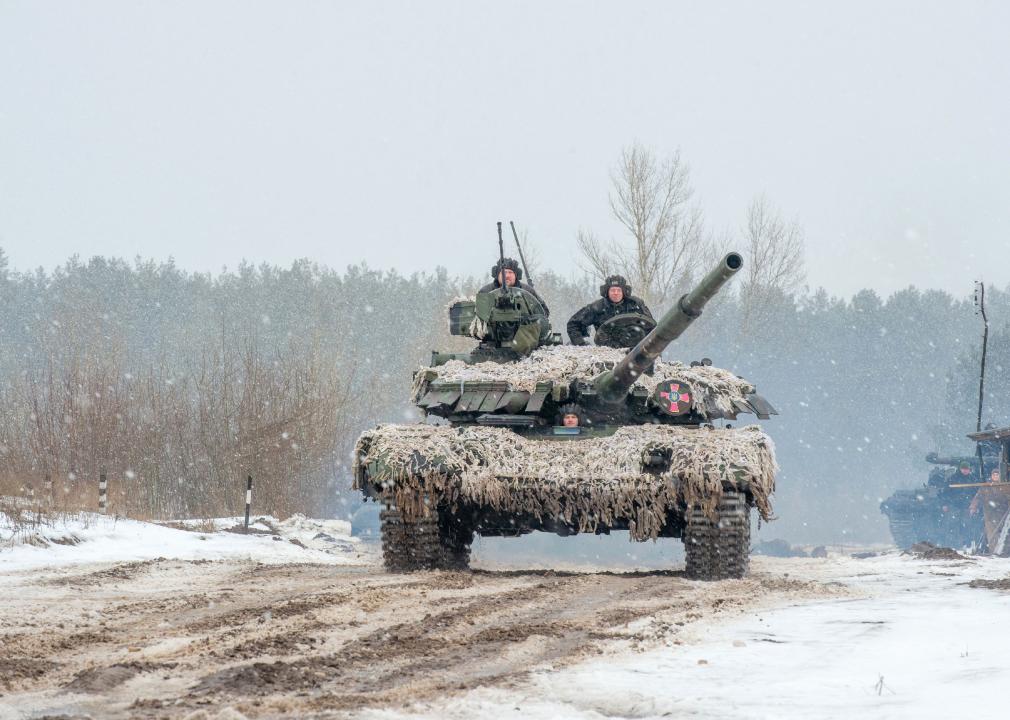 As the world’s largest country spanning the Eurasian landmass, Russia is a top exporter and the third-largest producer of crude oil. However, sanctions levied by the U.S. and the European Union in response to Russia waging war against neighboring Ukraine have reduced Moscow’s ability to sell crude, even as limited global supplies have paradoxically increased Russian export revenues. This is partially due to the sanctions stopping well short of a full international boycott.

Unlike the U.S. Congress, the EU’s 27 member countries cannot agree upon a total ban on Russian oil imports. Hungary, which remains heavily reliant on Russian imports, opposes the harshest restrictions. Recently the U.S. was importing just 3% of its crude oil from Russia, making a ban more than feasible. But other partner countries remain more reliant on Moscow for their supplies, including NATO member Turkey. Since its widely condemned invasion, Moscow has exploited these divisions within the EU, while selling crude at a discount to U.S. trade and security partners beyond Europe, including to India. Like many other commuters in Asia, Indians are driving more after the lifting of pandemic restrictions. The same trend is seen here in the U.S. The impact of of rising gas prices

The rise in gas prices have many Americans feeling the pinch at the pump, and 62% of small business owners say that inflation is the biggest problem facing their businesses, according to a May 2022 survey from the National Federation of Independent Business. The survey also found that 99% of small business owners have seen gas prices negatively impact their business, with 77% citing it as the substantial contributor to their higher costs. In fact, nearly half of owners said that the cost of energy—which includes gas and electricity—is one of their top five business expenditures.

With no sign of gas prices dropping soon, business owners must make difficult financial decisions to stay afloat: raising prices for customers; switching to cheaper materials; reducing the quantity or volume of their goods and services; cutting delivery services or reducing their delivery vehicles’ range to save on gas; and postponing work trips, to name a few.

Meanwhile, for everyday Americans, many resumed the types of domestic travel and work commuting previously on hold due to COVID-19 restrictions. Vehicle miles traveled hit a 26-year low in April 2020 but rebounded to pre-pandemic levels by summer 2021. Increased demand has not been matched by increased supply, as U.S. crude oil struggles to recover from the operational impacts of COVID-19 and a record 8% decrease in production in 2020. 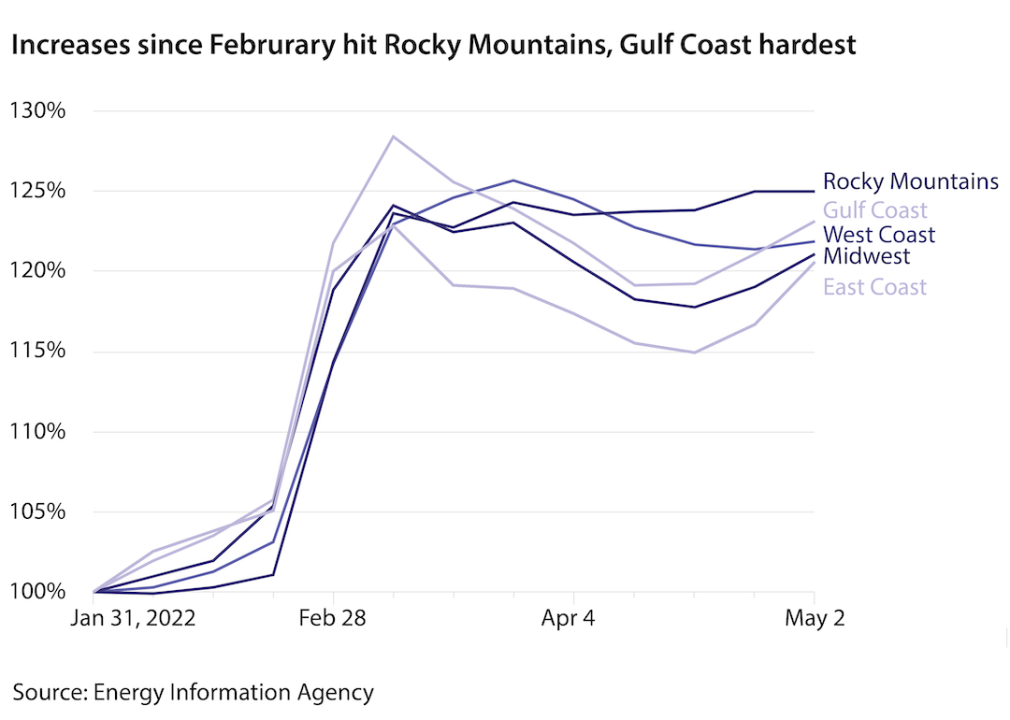 Access to regional oil refineries can significantly impact gas prices. Nearly 43% of the nation’s crude oil is refined in Texas—home to the oil and gas-rich Permian Basin. That keeps Texans paying about 30 cents less per gallon than the national average. But in California, crude access is more geographically limited, keeping gas prices consistently higher. The recent per-gallon price hikes in response to volatilities like post-pandemic fuel demands or the Russian-Ukrainian war have been more sudden in the Gulf Coast region compared to West coast states that are used to higher costs. 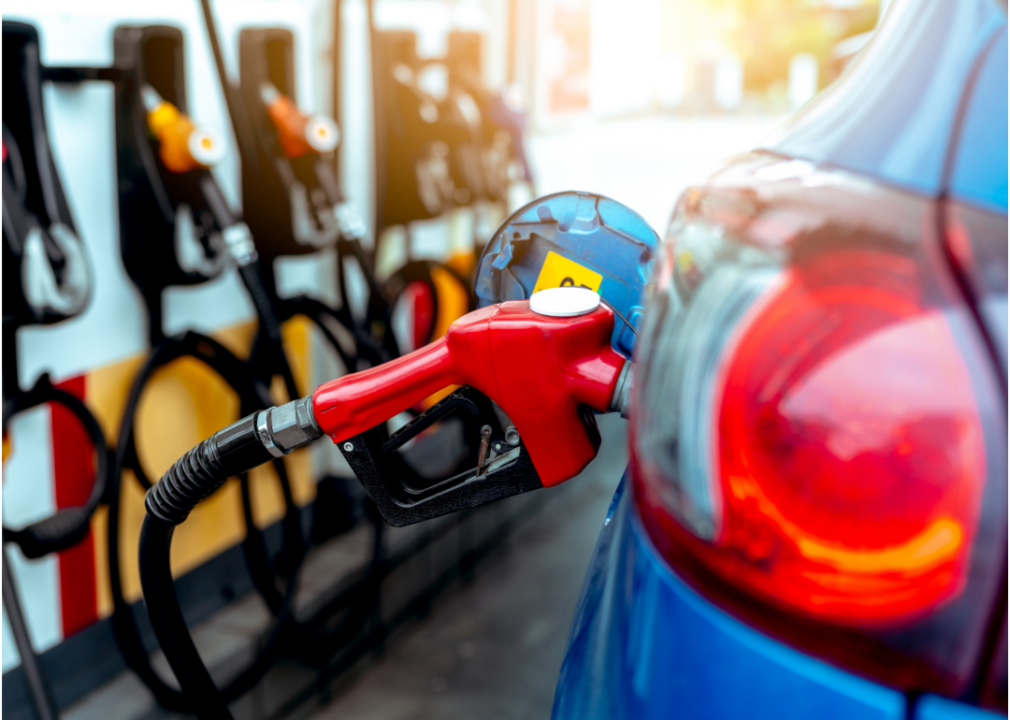 In March, U.S. Senate Democrats introduced the Gas Tax Relief Act, which would suspend the federal fuel tax until January 1, 2023. The freeze would save the average driver roughly $2.76 per visit to the pump. The bill is still under review. What’s clear is that higher prices at the pump are hurting workers who don’t have the option to telecommute—especially those who work in sectors previously hammered by the pandemic, such as construction and hospitality.

This story originally appeared on Routific and was produced and
distributed in partnership with Stacker Studio.

Abortion in America: How access and attitudes have changed…