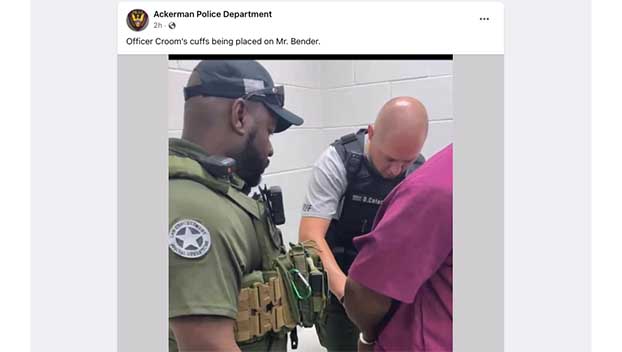 The accused killer of a Mississippi police officer was captured Friday after an overnight manhunt. Arresting officers placed the suspect in the handcuffs of the officer he’s accused of killing.

The symbolic move of placing the deceased officer’s handcuffs on the suspect has become a tradition for many officers investigating police killings.

A woman believed to be Bender’s girlfriend or fiance, Brittany Jones, also was found dead at the scene where Croom was shot, authorities said.

Croom was the first officer to respond to a call about a disturbance at a residence on Thursday afternoon and informed a dispatcher, “He had one at gunpoint,” she said. Soon after he reported that shots were being fired, according to Naylor-Young.

A second officer arrived to find Croom on the ground and Bender gone, she said. Officers went inside and found Jones dead, according to Naylor-Jones.

Bender was fired in January just a few months after being hired as a police officer in Newton, Mississippi, said Chief Randy Patrick.

“There was an altercation that happened off duty with a civilian at a Walmart in Forrest,” Patrick said. Bender also worked for the police department in Newton, his hometown, previously under a different administration, but the reason for his departure wasn’t immediately clear, said Patrick.

Originally from Tuscaloosa, Alabama, Croom is part of a family connected to University of Alabama football that includes an uncle, Sylvester Croom, who was an assistant coach at Alabama and in the NFL and head coach at Mississippi State University.

Kennis Croom, 30, worked with the Jackson Police Department previously and was honored by Tuscaloosa police in a statement shared on social media.

“Officer Croom served his community with bravery and selflessness. His sacrifice will not be forgotten,” Tuscaloosa police said.

Naylor-Young praised the deceased officer for his bravery and passion about police work.

“Although yesterday was his day off, he chose to come in and serve, which he was known to do regularly,” she said.

The Associate Press contributed to this report.