The first Jan. 6 hearing by the numbers 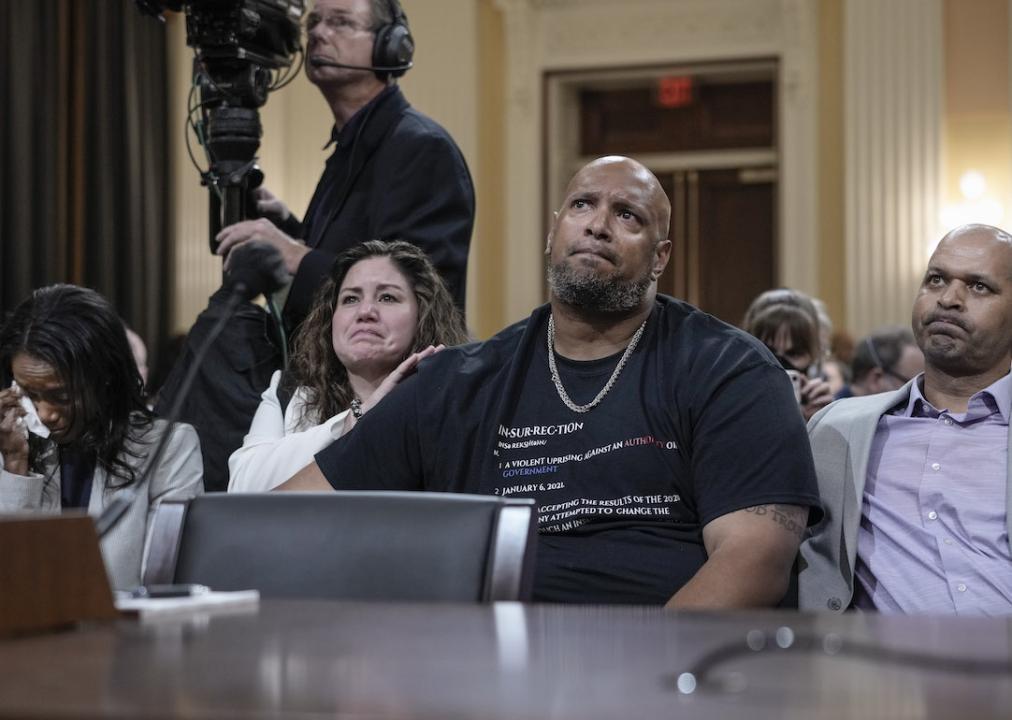 The first Jan. 6 hearing by the numbers

The Jan. 6 attack on the U.S. Capitol was an unprecedented event in American history—and now, the hearings showcasing the results of a nearly year-long investigation into that day are getting unprecedented treatment on American airwaves.

The Select Committee to Investigate the January 6th Attack on the U.S. Capitol, formed in July 2021, is presenting its findings in a series of at least eight hearings, the first of which aired during primetime on June 9. Most national networks, save for Fox News, paused regular programming to air the committee’s findings and to show testimony from witnesses and key players.

Edwards was the first law enforcement officer injured by rioters on Jan. 6, according to the committee. In her testimony, she described the “war scene” that unfolded on the Capitol. “It was something like I’d seen out of the movies. I couldn’t believe my eyes,” she said. “There were officers on the ground. They were bleeding. They were throwing up. I saw friends with blood all over their faces. I was slipping in people’s blood.”

Quested had been following the far-right group the Proud Boys with his film crew, and captured footage of the days and hours leading up to the storming of the U.S. Capitol, which was subpoenaed by the committee.

Read on to learn what the initial hearing of the committee revealed as Stacker traces the first hearing by the numbers.

You may also like: 25 ways America changed during the Trump administration 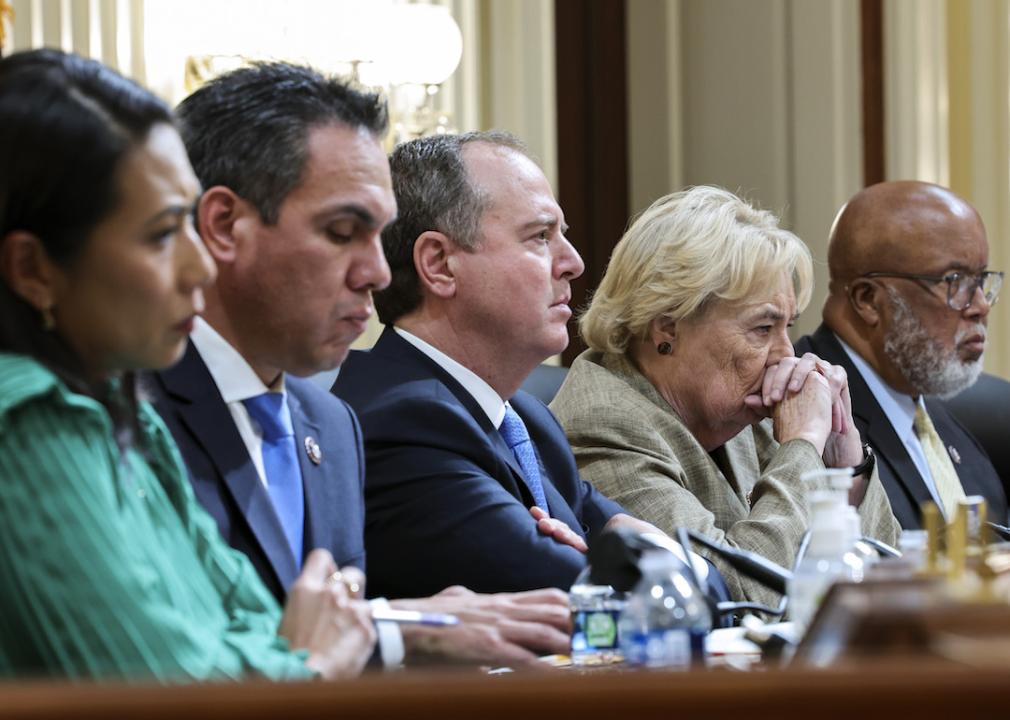 6 Democrats are on the Jan. 6 committee

Thompson began the hearings on June 9, explaining how the domestic attack on the U.S. Capitol was unlike anything the country had seen. He also alleged that former President Donald Trump “spurred a mob of domestic enemies of the Constitution to march down the Capitol and subvert American democracy.” 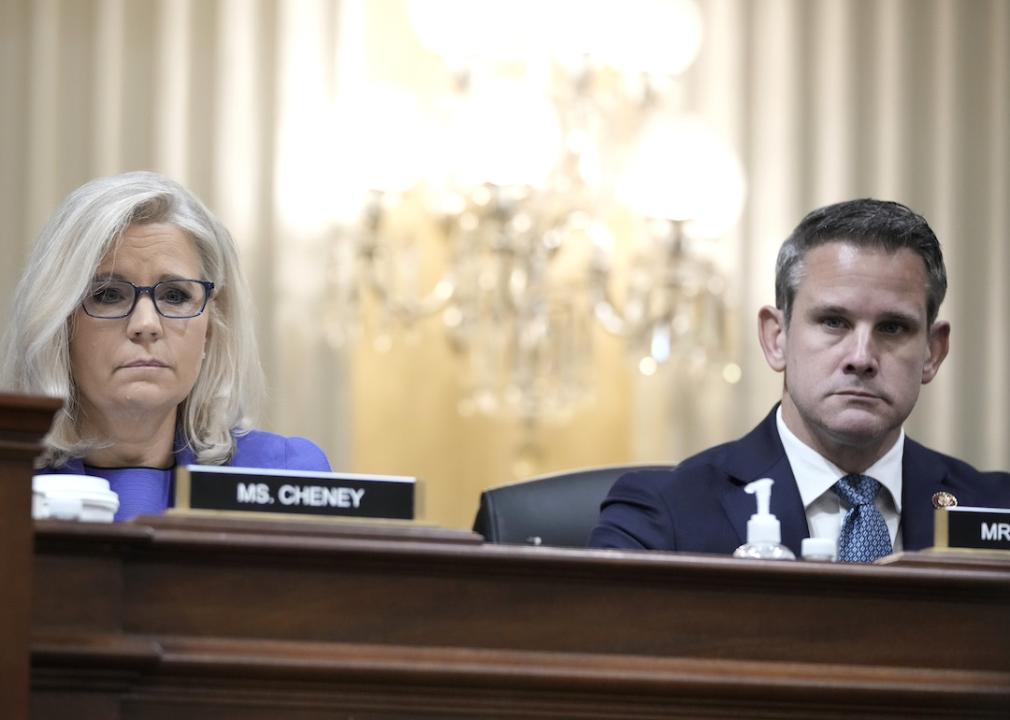 2 Republicans are also members of the committee

The minority members rounding out the committee are Wyoming Congresswoman Liz Cheney, who serves as vice chair and who delivered the opening statement on June 9, and Illinois Congressman Adam Kinzinger. In February, Cheney and Kinzinger were censured by the Republican National Committee for their involvement in this investigation.

During her remarks, Cheney, the daughter of former Vice President Dick Cheney, addressed her Republican colleagues, who are “defending the indefensible.” She plainly told them: “There will come a day when Donald Trump is gone, but your dishonor will remain.” 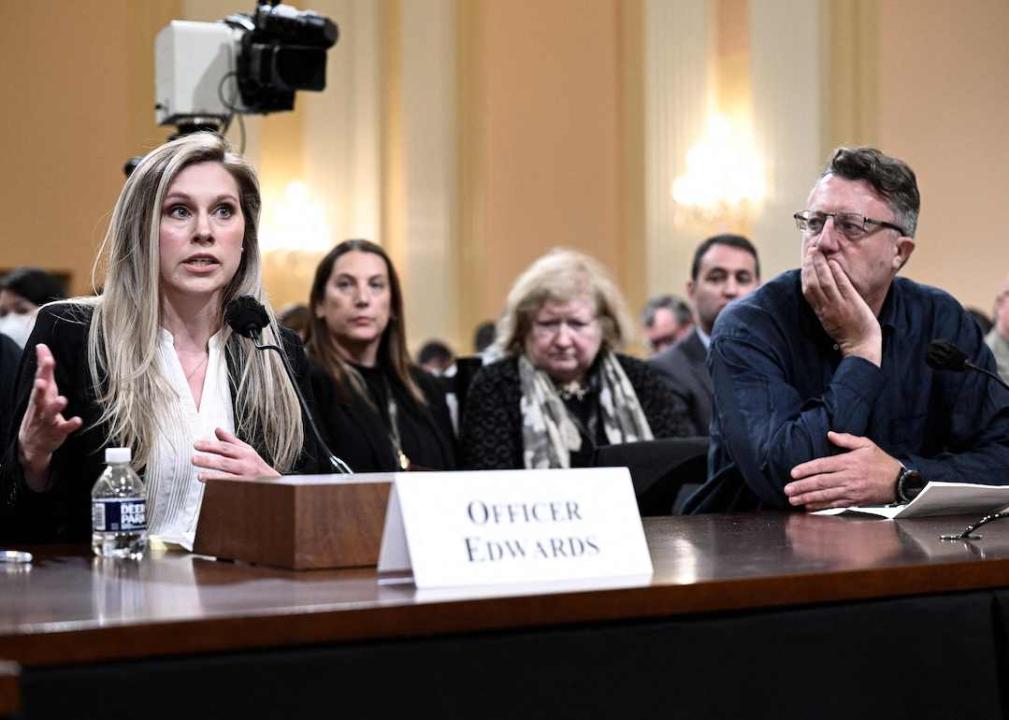 8 days of hearings are expected

Cheney outlined the hearings to come in her opening statement, seemingly established to align with Trump’s “sophisticated seven-part plan to overturn” the 2020 presidential election and “prevent the transfer of presidential power.”

As of now, only the first three hearings have been scheduled. Cheney said the second, which is set for the morning of June 13, will show how “Trump engaged in a massive effort to spread false and fraudulent information” despite being told by numerous members of his administration he lost the election. The third, scheduled for the morning of June 15, will focus on Trump’s alleged effort to further those claims about the election being “stolen” via the U.S. attorney general.

Dates have not yet been announced for the remaining five hearings, but Cheney laid out what each will cover. Hearing four will outline Trump’s attempt to pressure Vice President Mike Pence to stop the electoral count on Jan. 6. The fifth hearing will Trump’s efforts to influence state legislators and election officials, including his now-infamous recorded call to Georgia officials to “find 11,780 votes.”

Hearings six and seven will detail Trump’s influence in “summon[ing] a violent mob” and directing them to march on the U.S. Capitol, as well as how he “failed to take immediate action” to stop the insurrectionists. The final hearing will include a “moment by moment account of the hours-long attack from more than half a dozen White House staff.”

Cheney said all of these hearings should be taking place in June. 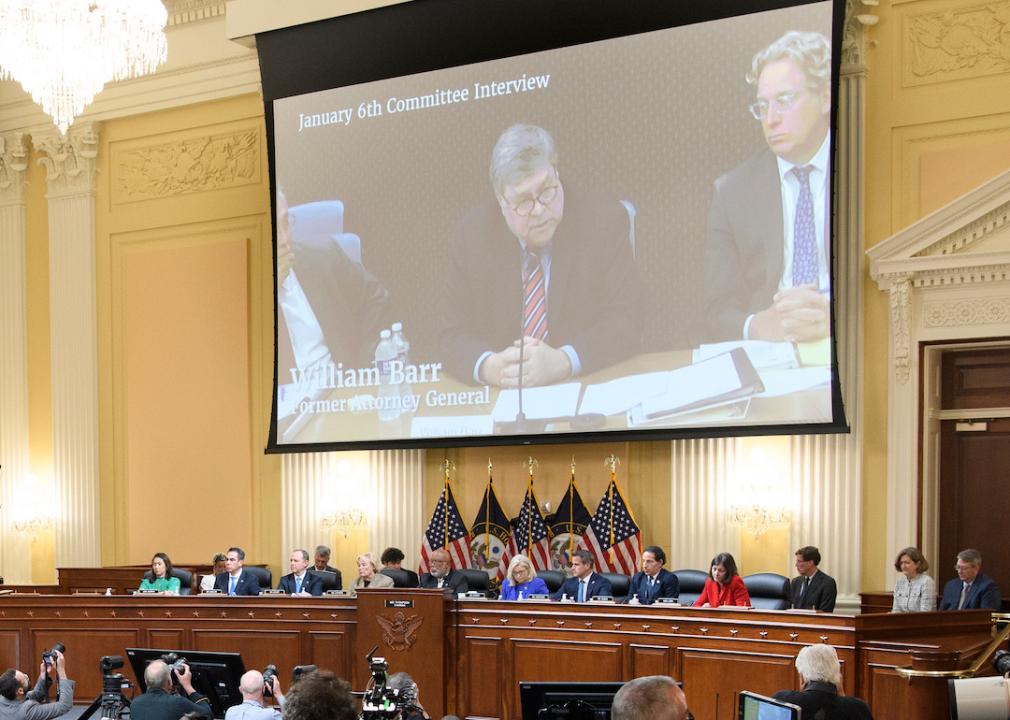 While much of the first hearing was spent detailing the day of Jan. 6, the chairman and vice chairwoman traced the events leading up to that day as well, focusing on Trump’s insistence that the 2020 presidential election was not a fair one.

The committee showed investigators’ interview with former U.S. Attorney General Bill Barr, in which he said he told Trump his allegations about Dominion voting machines miscounting votes were “complete nonsense.”

“I saw absolutely zero basis for the allegations, but they were made in such a sensational way that they obviously were influencing a lot of people, members of the public, that there was this systemic corruption in the system and that their votes didn’t count, and that these machines, controlled by somebody else, were actually determining it, which was complete nonsense,” Barr said. “I told him that it was crazy stuff and they were wasting their time on that and that it was doing great, great disservice to the country.”

Cheney said Trump repeated “the false Dominion allegations in public at least a dozen more times” after Barr told him the claims were groundless. 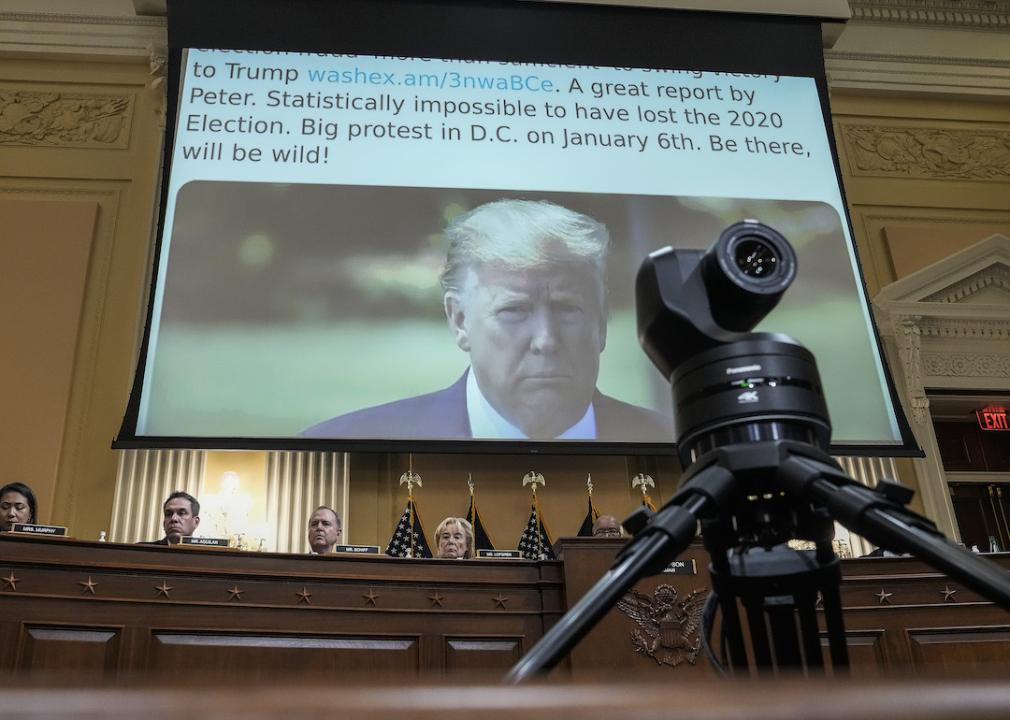 Millions of dollars Trump spent on a campaign claiming fraud

Thompson and Cheney’s opening statements aimed to prove Trump knew the election was a fair one, but that he continued to spread the idea it was “stolen” or fraudulent. Cheney alleged Trump “invested millions of dollars of campaign funds purposely spreading false information, running ads he knew were false, and convincing millions of Americans that the election was corrupt and he was the true president.”

The committee purports that the campaign fueled and “provoked the violence on January 6th.” 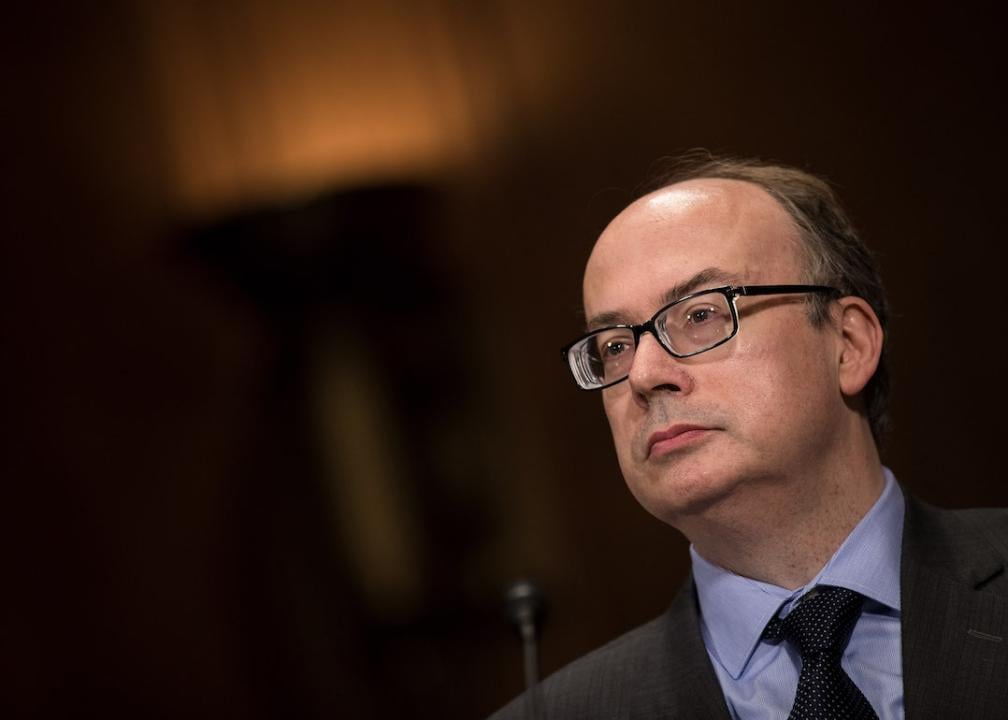 After Attorney General Bill Barr resigned in December 2020, Trump allegedly offered Jeffrey Clark, an environmental lawyer at the Justice Department, the job of acting attorney general. Cheney said the president wanted Clark to send letters to Georgia and five other states, saying the U.S. Department of Justice had “identified significant concerns that may have impacted the outcome of the election.”

However, Cheney said that wasn’t true. “The Department of Justice had, in fact, repeatedly told President Trump exactly the opposite—that they had investigated his stolen election allegations and found no credible fraud that could impact the outcome of the election,” she explained. “This letter, and others like it, would have urged multiple states to withdraw their official and lawful electoral votes for [President Joe] Biden.”

Clark ultimately did not assume the role of attorney general. In October, the committee subpoenaed him for testimony and documents. They also recommended criminal charges of contempt of Congress against Clark a few months later. Earlier this year, at an appearance before the committee, Clark refused to answer questions, pleading the Fifth more than 100 times. 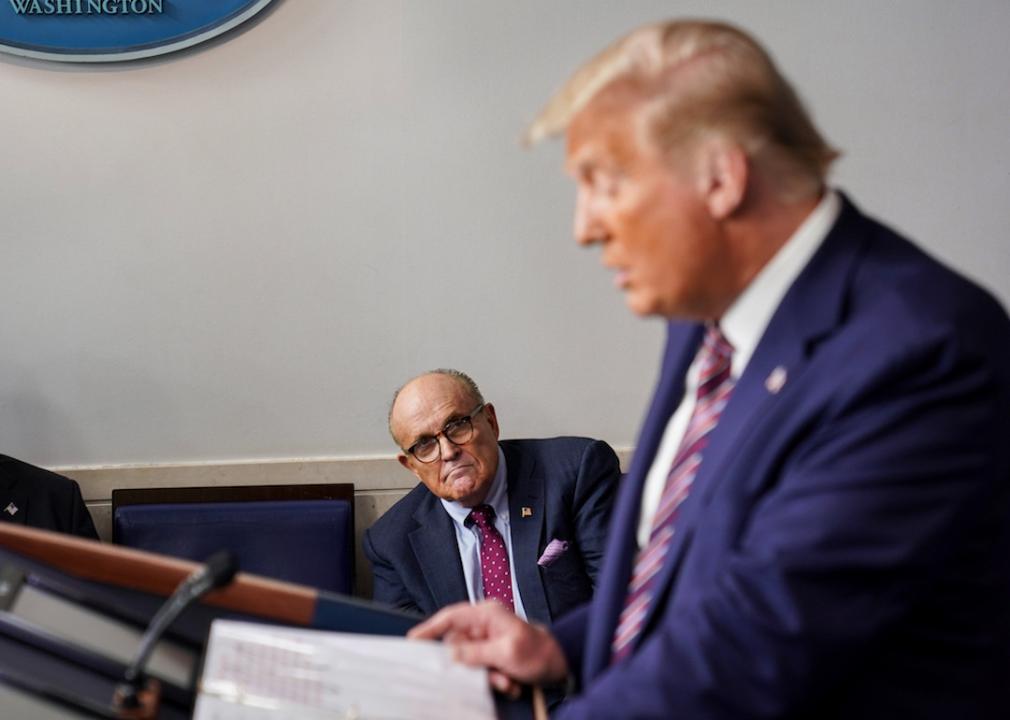 Though Cheney said Trump “had every right to litigate his campaign claims,” she noted he ultimately lost more than 60 cases in both state and federal courts.

“The president’s claims in the election cases were so frivolous and unsupported that the president’s lead lawyer, Rudy Giuliani, not only lost the lawsuits, his license to practice law was suspended,” Cheney said, noting this would be explored in greater detail at the June 13 hearing. 300 Proud Boys began the march on the Capitol

The committee alleged that roughly 300 Proud Boys were the first to march toward the Capitol, showing footage of the growing crowd that gathered at the National Mall around 10 a.m. In his testimony, documentarian Nick Quested said he estimated a “large contingent” of a couple hundred members of the group were there at that time. As they made their way toward the U.S. Capitol, they chanted, “Whose streets? Our streets.” 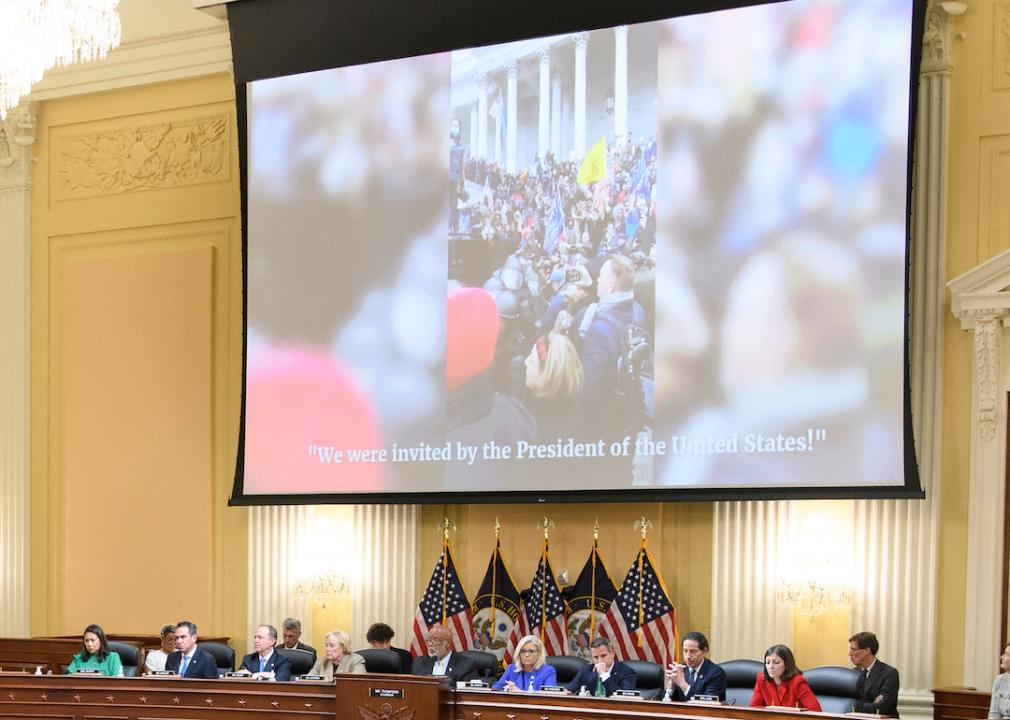 The exact timeline of the events of Jan. 6 will be covered during the committee’s final hearing, but they did show some never-before-seen footage of the day, from both Quested and his film crew and from officers’ body cameras.

Based on the committee’s account, the first breach of Capitol grounds occurred at 12:54 p.m. and by 2:13 p.m., 79 minutes later, they breached the Capitol building. Dominic Pezzola, a Rochester, New York-based member of the Proud Boys, broke a window using a police riot shield, as video depicted. The footage showed the insurrections walking the halls of the Capitol chanting, among other things, “Whose house? Our house. 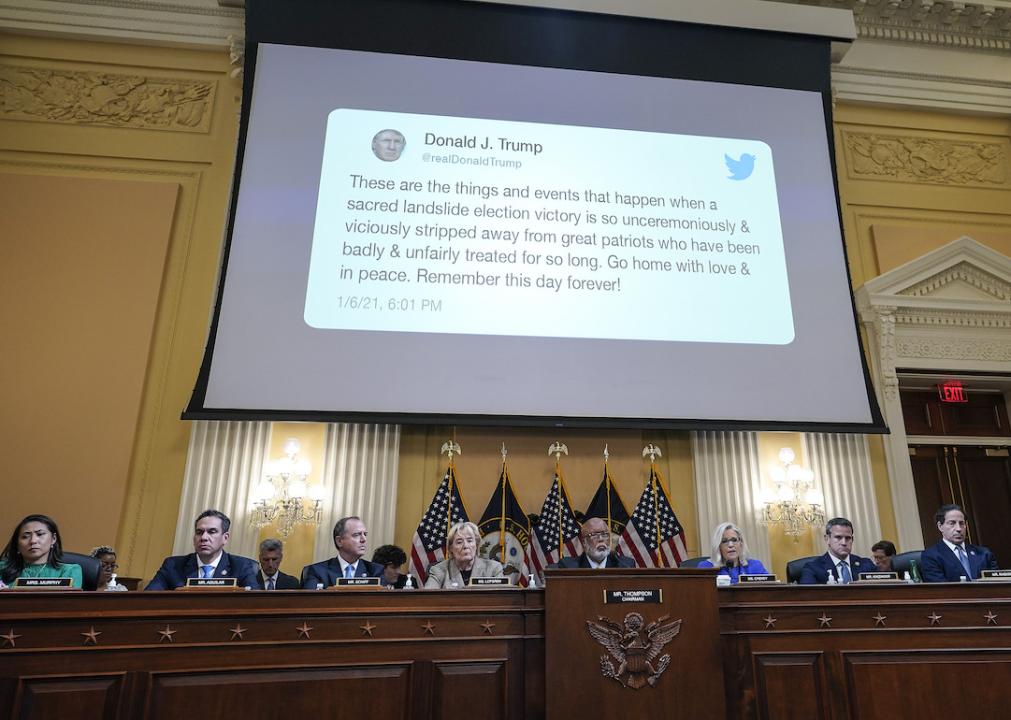 Zero calls made by President Trump to the Secretary of Defense, his attorney general, or Homeland Security

One piece of evidence Cheney showed at the hearing was a handwritten note on chief of staff stationery, allegedly written to the president, that seemed to instruct him to send the following message on Jan. 6: “Anyone who entered the capitol without proper authority should leave immediately.”

“This is exactly what his supporters on Capitol Hill and nationwide were urging the president to do. He would not,” Cheney said. “Not only did President Trump refuse to tell the mob to leave the Capitol, he placed no call to any element of the U.S. government to instruct that the Capitol be defended. He did not call his Secretary of Defense on January 6th. He did not talk to his attorney general. He did not talk to the Department of Homeland Security.”

Cheney continued: “President Trump gave no order to deploy the National Guard that day, and he made no effort to work with the Department of Justice to coordinate and deploy law enforcement assets. 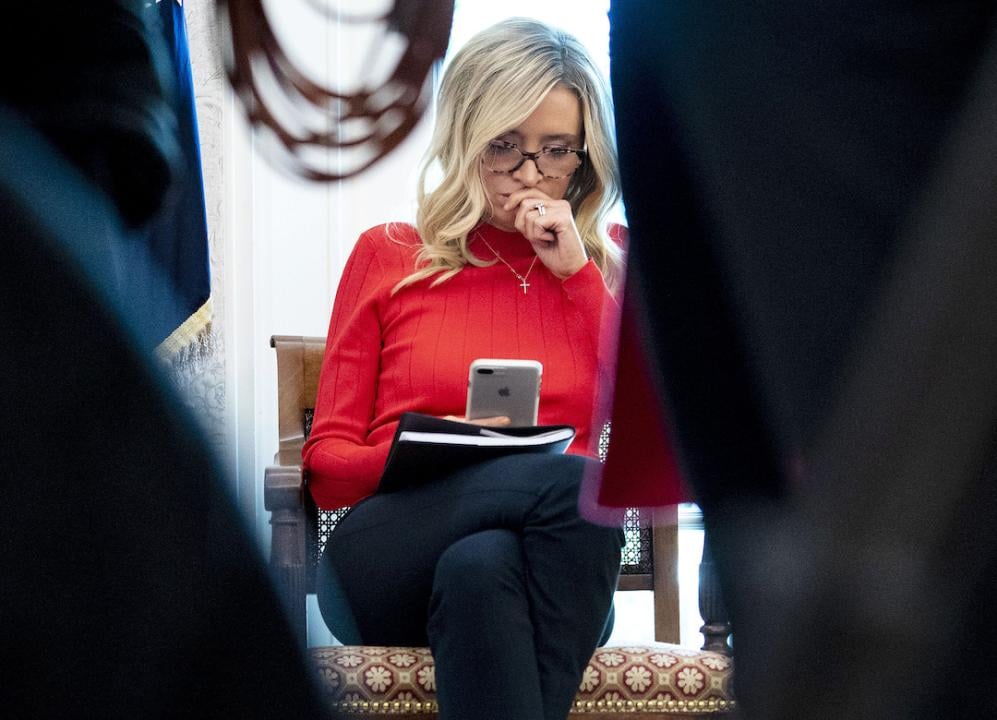 The 25th Amendment was on the table

Cheney said multiple members of Trump’s Cabinet discussed the possibility of invoking the 25th Amendment, which lays out the procedures for replacing the president or vice president of the United States in the event of death, resignation, removal, or incapacitation.

She showed a text message exchange between Fox News host Sean Hannity and former White House Press Secretary Kayleigh McEnany in the wake of Jan. 6. In part, Hannity wrote: “No more stolen election talk,” adding, “Impeachment and 25th amendment are real, and many people will quit.” McEnany responded: “Love that. That’s the playbook.”