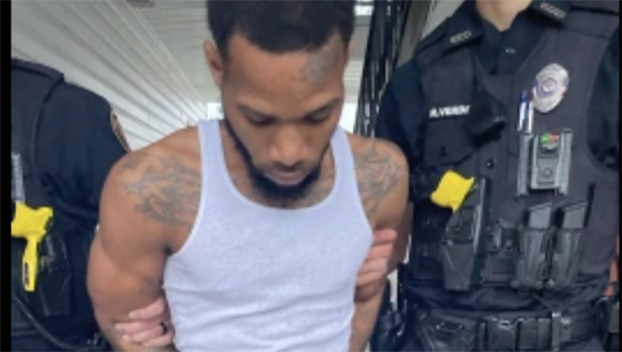 A man wanted for attempted murder after firing numerous shots at a Mississippi apartment complex on Tuesday has been arrested.

Amanti Briscoe, 23,  was arrested Friday evening just before 8 after law enforcement officials were provided with a tip through Mississippi Coast Crime Stoppers that he was at the Waveview Place Apartments complex in Waveland.

Briscoe was wanted for his part in firing at least eight shots at individuals who were outside the building of an apartment complex located at 3199 Jackson Landing Road, in Pearl River County

Maj. Marc Ogden with the Pearl River County Sheriff’s Department said investigators received the call of the incident on June 7, at 11:36 a.m. They arrived to find several bullet holes on the outside of one of the apartment buildings and an investigation determined Briscoe allegedly got into an altercation with another resident of that area after that person allegedly took Briscoe’s narcotics.

The investigation so far shows that due to the alleged theft, Briscoe shot at people outside the building. Ogden said the people he shot at were not the same as the one who allegedly stole his narcotics. When asked about Briscoe’s motive for the shooting, Ogden said, “He has total disregard for human life.”

As the investigation continued over the last couple of days, Ogden said the department secured enough probable cause and evidence to obtain an attempted murder warrant for Briscoe.