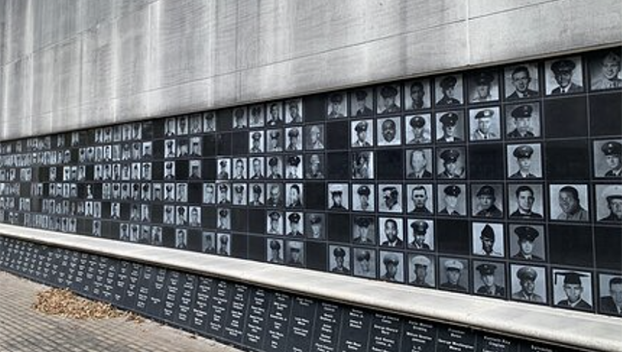 On Memorial Day, a ceremony was held at the Mississippi Vietnam Veterans Memorial in honor of both the national holiday and in commemoration of the 25th anniversary of the memorial’s completion.

State and local dignitaries, along with a number of Vietnam veterans and local citizens, attended, sitting inside the striking memorial which, according to many, has the greatest aesthetic appeal of any of the Vietnam memorials located in each of the 50 states.

For many years, however, the memorial was largely neglected. With the committee charged with the memorial’s upkeep having dwindled down to just 3-to-4 overwhelmed members, the memorial sat dirty and unkempt, with repairs needed in places.
How it arrived at that point requires a bit of a history refresher.

With local and private donations supporting a $750,000 grant from the state, a ceremonial groundbreaking for the memorial took place on May 29, 1995, with more than 1,000 people, including then-Gov. Kirk Fordice, in attendance. The following year, on Dec. 5, actual construction began, and on May 31, 1997, the Mississippi Vietnam Veterans Memorial was dedicated and opened to the public.

Once it opened and the initial excitement over the memorial dissipated, donations began to dry up and the maintenance and upkeep of the memorial began to be problematic.

After donating the $775,000 for construction (half of the $1.5 million originally committed) the State of Mississippi has barely lifted a figurative finger to support the memorial.

“That’s absolutely correct,” said a longtime memorial committee member, who asked not to be identified. “They put up a few signs out on the interstate to direct people to the memorial. It took us seven years to get those put up. Then, after (Hurricane) Katrina took them down, it took another five years to get them replaced. So, yeah, the state hasn’t been real cooperative.”

In addition, the committee member said efforts to get local Veterans of Foreign Wars or American Legion chapters to assist proved fruitless. “For whatever reason, they would not help with the memorial committee. I have no idea why,” he said.

“I did have one (federal) elected official say he was going to get the committee some money for the memorial,” the committee member said. “I don’t know if he had a slush fund or something, but it never panned out. I don’t depend a lot on the federal people.”

Now, however, with the original committee essentially disbanded, reinforcements have come on board to give the memorial the attention it needs.

Ocean Springs alderman Rob Blackman was contacted roughly two years ago to visit the memorial site and “see how neglected the site had become,” Blackman said. “I hate to use the word neglect, but that’s what it was.”

Blackman began to seek out volunteers, enlisting the help of the city fire department and younger veterans.

“Anybody who would help, really,” Blackman said. “It took us about a year, but we finally got it back in decent shape. Now the city is taking the lead, because it’s on our property. Our parks & recreation department has stepped up to handle groundskeeping and I’m going to make sure we have money budgeted for pressure washing each year, so we don’t let it get in the condition it was in.”

But these initial efforts, while needed, aren’t enough. The memorial still needs numerous repairs. There are cracks in the interior flooring, discoloration in places, and other damage. Blackman has turned to state officials in the hopes of obtaining the state’s financial support for the memorial for the first time since that initial donation 25 years ago.

Blackman said he’s spoken with state Reps. Kevin Felsher and Hank Zuber about finding funding “to help us in the future keep the memorial on the right path.”

Perhaps most important to the memorial’s future, however, is the participation of a younger generation of veterans who are passionate about the memorial.

“We had a meeting with a whole group of veterans who all want to be involved,” Blackman said. “A younger generation of veterans has stepped up and their help will be invaluable.”

The longtime committee member, himself a Vietnam veteran, agreed.

“It certainly is,” he said when asked if it was heartening to see new volunteers coming in. “It’s nice to see other people coming in and getting involved — and other Vietnam veterans, as well.