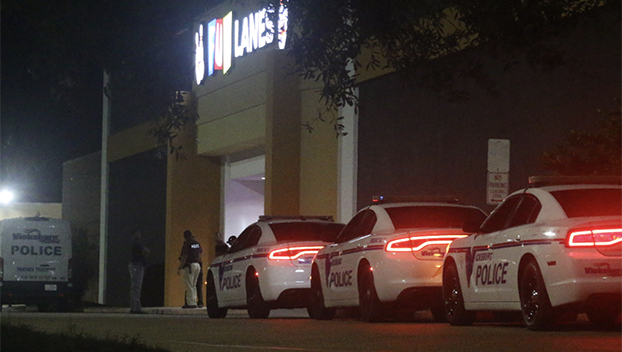 Following a 6 p.m. announcement on the agency’s Facebook page, the Vicksburg Police Department was out in force at Uptown Vicksburg, formerly the Vicksburg Mall, on Friday night.

TO ALL PATRONS OF THE VICKSBURG MALL,
IN AN EFFORT TO MAKE OUR COMMUNITY SAFER FOR OUR CHILDREN, THE VICKSBURG POLICE DEPARTMENT WILL BE STRICTLY ENFORCING
MISSISSIPPI CODE 97-5-39.

PLEASE DON’T DROP YOUR CHILDREN OFF AT THE MALL. THEY MUST BE ACCOMPANIED BY A PARENT OR GUARDIAN.

Mississippi Code 97-5-39 pertains to contributing to the neglect or delinquency of a child. An accompanying graphic on the post also specified the age range as 18 and under.

Outside Fun Lanes bowling alley at the mall on Friday night, a white van with the VPD logo was parked with multiple officers checking identification and turning away children who were underage.

VPD Officer and net team leader Carlton Phillips spoke to The Post about the operation, stating that his team did not plan to fine or arrest anyone for violating Mississippi Code 97-5-39 on Friday night, but that if a child was dropped off at Uptown Vicksburg, they would be transported to the Vicksburg Police Station where they could contact their parent or guardian to retrieve them.

“We’re going to detain the child and they’re going to have to call their parent to come to get them,” Phillips said. “They’re going to be charged with dropping their child off because they have to be attended. We’re not arresting them tonight; that’s why we got here early. We’re trying to get the word out to the parents.”

Fun Lanes also had signs placed on its doors stating that people under 18 years of age were not permitted to enter the building without an adult.

Phillips explained that the action taken by VPD was at least partially due to a series of recent fights on mall property.

“The mall had a big fight out here last week; they had like, three different groups fighting outside the mall facility,” Phillips said.

Phillips did not specify whether any minors had been detained as of 10 p.m. Friday night, but he and his team were checking the ID of every individual entering the premises.