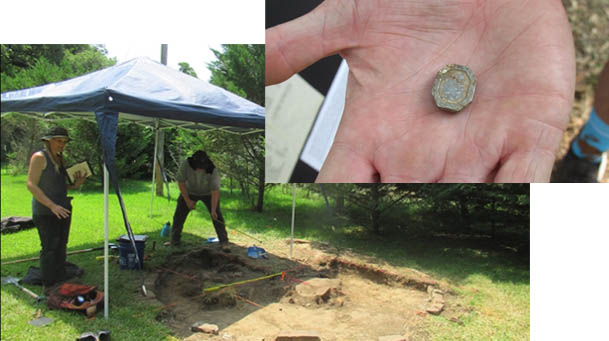 At right, the mourning locket pictured likely belonged to an enslaved person at Concord Quarters and could contain hair from the wearer’s loved one. (Maia Bronfman | The Natchez Democrat)

Below a garden fence wrapped in vines and buds of fuchsia, wrought iron hides in the dirt at Concord Quarters. It could be the structural support for a brick extension built in 1819 off of the main plantation house.

Though the above-ground house burned down in 1901, Shawn Lambert, Ph.D., professor of anthropology and archaeology at Mississippi State University, hopes the iron feature will lead them to the base of a column. Lambert is two weeks into an archeological dig on the grounds where Concord’s mansion once stood.

Debbie Cosey and her husband Greg Cosey, who own the last building standing from the original construction, invited the project to narrate the “ingenuity and skill that the enslaved people had,” Cosey said. “It’s important to remember the lives and the work of the enslaved people, many with forgotten names,” she added.

Concord Mansion was first built in the 1790s by Manuel Gayoso, governor of Spanish Louisiana, as a plantation home. He built police and fire stations for Natchez, too, and adorned his own home with a double marble staircase which went up to the second floor. The stone was shipped from Spain, through New York, for his architectural exceptionalism in a town of cyprus construction.

In 1799 Gayoso died of yellow fever and Stephen Minor, Gayoso’s secretary and captain in the Spanish army, moved in with his wife Katherine. Then 10 years later Minor died, and Katherine ran the house until she passed it to her daughter, also named Katherine.

In 1844 the Minors owned 147 enslaved people. Concord Quarters, the Cosey’s current home, was where many of them lived. Unique to the records kept at Concord are last names of enslaved people.

First names, even, are rare. Because of the detail in Katherine’s documentation, genealogical research and collaboration with descendant communities can be used to uncover direct descendancy to people in the current Natchez community.

Open to student-led tours every Thursday, the archaeological field study is a “testament to the powers of combining the tools of archeology with the cultural heritage of the community, and the people who have these important historical connections to these places,” Lambert said.

“This kind of archeology hasn’t been done very much in Mississippi when it has been done. It’s the future of archeology,” he added

One of their main excavations was prompted by a few bricks disrupting the lawn from below. They’ve since uncovered a cistern 17 feet wide. Typically, they are a third of that size.

“We thought tree roots had destroyed it,” Seylor Foster, junior archeology student at MSU, said of the still intact cistern.

The cistern, once a cavernous water storage tank for the original mansion, was likely built by enslaved people. There are three depressions facing up in one of the bricks which forms the border of the cistern. Cosey has been looking for a brick like this for years.

The depressions are fingerprints. When enslaved people would make bricks, they often had quotas. To identify which bricks were theirs, they would sometimes push their fingers into the clay before it went to the kiln. The number of fingers they used as their signature was specific to each person.

The enslaved person who made the brick uncovered in the cistern used three.

“Your thumb is on their thumb. For someone like Debbie who’s been searching for one of those bricks for 6 or 7 years, she has an even deeper connection,” Foster said.

Emily Cohlmia joined the project from the Oklahoma Public Archeology Network. After her two sons graduated from high school, she decided to leave her job teaching 8th grade to study public archeology.

She hopes to get youth groups involved with public archaeology. While still teaching, Cohlmia remembers her students asking if she was going to find dinosaurs.

“Even in 8th grade they don’t understand the difference between archaeology and paleontology,” she said.

One of Cohlmia’s most memorable finds at Lambert’s field school was a pewter toy rake from the early 1800s and mini teacup handles, probably from a play set. These artifacts were found in an area where the enslaved lived and worked at Concord.

“There were children here,” she said about the miniature domestic items.

“The metallic object turned out to be mourning locket,” Lambert said. “The locket is still intact and there is a possibility that hair, which was often placed into mourning jewelry during the 19th century, is still inside.” Due to the low-quality metal and the area in which Lambert’s students were excavating, the locket was likely owned by an enslaved person.

One of the last recorded events at the mansion was in 1901, Cohlmia said. While Dr Steven Kelly owned and rented the property, the Duke and Duchess of Manchester, barely entering adulthood, lined the drive with lanterns and invited droves of people and bottles of port.

Two months later, the house was illuminated not by lanterns but by embers.

“I think after the main party the caretakers maybe had some booze and started a fire,” Cosey said. Her theory is well known by the archeologists, though Lambert said “we may never know what really happened.”.

It is still unknown what started the fire, what left the marble staircase to climb toward nothing. Even the staircase gradually disappeared as visitors in the mid-20th century realized they were relics and stole the marble stairs to adorn their gardens.

Some of the slabs have since been recovered and lined up by the Cosey’s in their backyard. Some have markings to instruct the original builders which side should be placed facing upward.

The public is invited to visit the site on Thursdays until June 30. The collection of discoveries, displayed on a plastic table, continues to grow. An intact spongeware cup from the 1840s, likely used by enslaved individuals, is identified by a flash card.

There are also olive green bottle fragments that could be from the Minors’ vast inventory of wines.

Some artifacts have been outside the realm of their purported interests, like a Snoopy doll from the 1970s and a 1969 Hot Wheels car. “If it’s 50 years or older, it’s considered an artifact, so we had to keep it,” Lambert said.

Bullets likely from the Union occupation, one fired, were also found. Because Natchez surrendered, any fired bullets were likely from practice.

Lambert’s team will take all of these artifacts back to MSU where they will wash, analyze and curate them for preservation. With the Coseys’ permission, they might distribute some to museums but most will return to Concord Quarters for display.

A primary goal for Lambert’s public archaeology field school is to create an interactive walking tour at Concord. Each uncovered feature will have a display banner and be beautified with flowers. A walking tour will create an “interactive history of the true history of Concord,” Lambert said.

The cistern won’t be completely unearthed. Instead, it will be “exposed to the point where it’s a beautiful feature rather than an eyesore,” Lambert said.