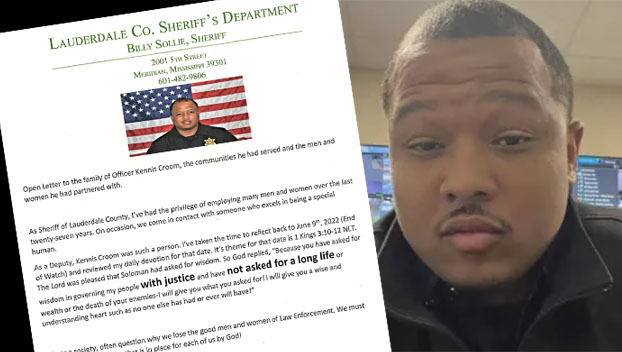 A Mississippi sheriff published an open letter after reflecting on the death of Meridian Police Officer Kennis Croom.

Croom was killed while responding to a call where a woman, Brittany Jones, was shot to death. Her fiance, former Newton, Mississippi, police officer Dante Marquez Bender, was arrested in the shootings on Friday in Ackerman, Mississippi, about 80 miles (129 kilometers) north of Meridian.

A memorial service will be held Thursday in Meridian, Mississippi, for Meridian Police Officer Kennis Croom, who was killed while answering a call about domestic violence at a home in the city last Thursday.

Other events be held in Tuscaloosa, Croom’s hometown. The funeral will take place there Saturday, according to an announcement from the Tuscaloosa Police Department.

Open Letter to the family of Officer Kennis Croom, the communities he had served and the men and women he had partnered with.

As Sheriff of Lauderdale County, I’ve had the privilege of employing many men and women over the last twenty-seven years. On occasion, we come in contact with someone who excels in being a special human.

As a Deputy, Kennis Croom was such a person. I’ve taken the time to reflect back to June 9th, 2022 (End of Watch) and reviewed my daily devotion for that date. Its theme for that date is 1 Kings 3:10-12 NLT.

We as a society, often question why we lose the good men and women of Law Enforcement. We must never question the plan that is in place for each of us by God!

Rest easy Officer Kennis Croom. You were a good man!