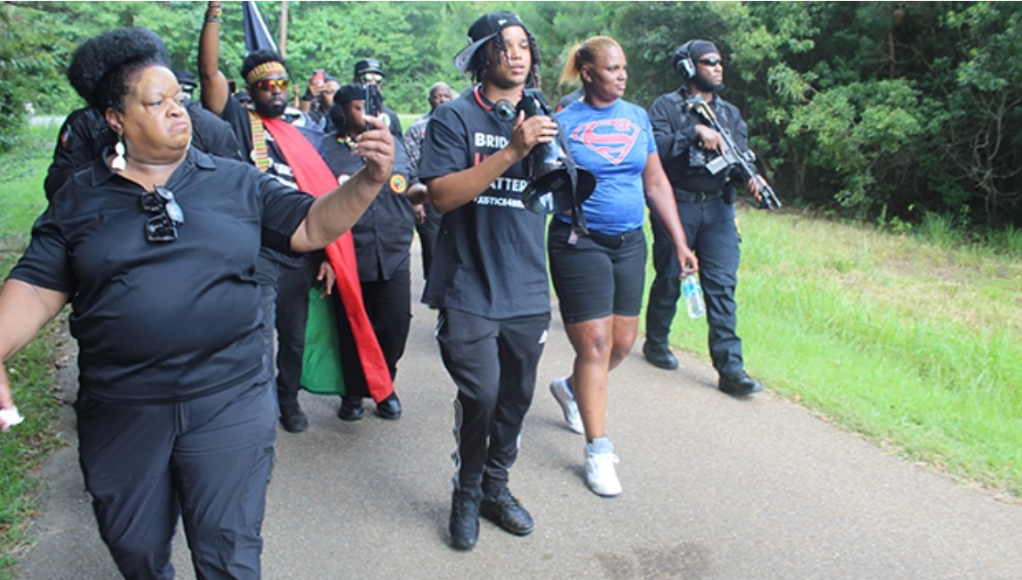 D’Monterrio Gibson walks with a megaphone in his hand as he tells his story about being shot at while delivering for FedEx on January 24, 2022. (Hunter Cloud | The Daily Leader)

They started at Bicentennial Park before driving to the Lincoln County Courthouse. Once there, armed gun club members stood on the sidewalk while the gun club president Nick Bezzell went in to talk with District Attorney Dee Bates. After a couple of minutes, Bezzel left the office and gave an impromptu statement to a documentary team and others gathered around.

“This DA said he would be here, and then he leaves. He knew all of us were coming to town,” Bezzel said. “It tells me he doesn’t care, and we have to ramp up patrols and pressure until we get justice.”

Bezzel coordinated the “Say His Name” event in Brookhaven as part of the club’s “Devil’s Punchbowl National Formation” weekend, which continues through Sunday and coincides with national Juneteenth events. The weekend features events in Jackson, including town hall meetings on street violence; the Brookhaven event on Friday; and a march and rally on Sunday in Natchez to commemorate the deaths of thousands of Black Americans at the Devil’s Punchbowl during the Civil War.

Bezzel said earlier this week he was coming to Brookhaven to seek answers about the prosecution of two white men charged with assaulting Gibson in January. The club president had stated publicly he wanted to meet with the District Attorney.

Bezzel said he received a phone call from Bates Friday morning, and Bezzel told him when he expected to be in Brookhaven. Bezzel said the men agreed to meet in person, but Bates left.

In a call later Friday, Bates said this was not true. He said he called Bezzel and said he had a meeting at the crime lab in Jackson for a trial this week. Bates waited until 1:30 p.m. before leaving for Jackson and returned to Brookhaven by about 5:15 p.m.

After leaving the county courthouse, the group drove across town to the Brookhaven Police Department on US 51. Once there, Bezzell led a group into the police department’s lobby and asked to speak with Police Chief Kenneth Collins, Assistant Chief Chris Case and Police Captain Clint Earls. They were all unavailable.

Bezzel was frustrated and said the police department was dodging the group.

“There has to be a citizens patrol conducted here in Brookhaven to police the police. Someone has to watch them do their job,” Bezzel said. “If police are not competent, then the citizens need to organize, and that is what it looks like they will need to do here. We can help set that up and how to conduct oversight. Hopefully the goal is to get funding from the county to get an oversight office here in the city and the county.”

Next, Gibson led a march down Junior Trail NE off New Sight Road, where he was shot at while trying to make deliveries.

According to reports, Gibson had delivered a package to an incorrect address on Junior Trail NE and retrieved it from a  residence. That is when Gregory Case, 58, attempted to block Gibson’s truck from leaving by using his own vehicle while Brandon Case, 35, stood in the road with a firearm. Gibson pulled his delivery vehicle past both men, who pursued him as far as I-55 with the younger Case reportedly shooting repeatedly into the vehicle.

On Feb. 28 and March 1, Gibson swore affidavits at Brookhaven Municipal Court and Lincoln County Court alleging murder and conspiracy to commit murder against the men.

Bates said the Brookhaven Police Department is waiting for the full Ring video of the incident and the records from FedEx including a call log, which have been subpoenaed. He has to have a full file before going to Grand Jury.

“Every case has to go before a grand jury in Mississippi. If there is an indictment we have to give a full discovery to the defense team,” Bates said. “We have to give a completed file if and when we can supply it to a defendant and defense. Depending on when we get the last remaining evidence, we could go to grand jury in July.”

Two arrested after they reportedly opened fire on man,…