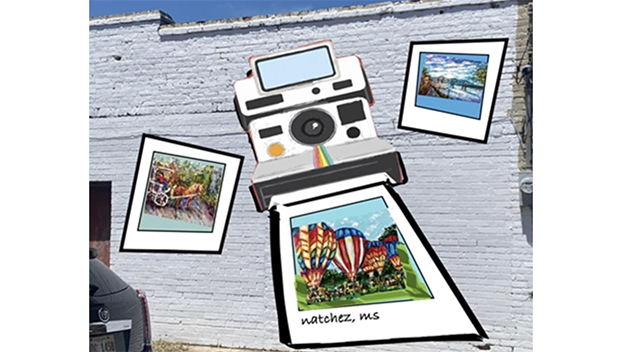 The City of Natchez planning department, under the leadership of new city planner Frankie Legaux, is working on a set of guidelines, which if approved, could lead the way for murals in the Natchez historic district.

Taylor Cooley, a professional photographer, owns the building at 631 Franklin St in the city’s historic district., which she uses as an event space, as well as to house her photography business. She began the effort to get permission from the city to add a mural to the side and back of her building more than a year ago, she told the city’s preservation committee Wednesday night, when they tabled her request.

Natchez Mayor Dan Gibson said he is not opposed to the idea of murals per se.

“The City of Natchez has a longstanding policy of abiding by our preservation ordinance, which establishes guidelines for approval of renovations and alterations to properties in the historic district,” Gibson said. “This applies to paint color, exterior modifications and even landscape changes where historic plants and trees may be affected.

“The overall goal has been and continues to be to maintain the historic fabric of the city, which is truly one of a kind,” he said.

The mayor said he thinks everyone is sympathetic to the desire to add murals.

“But as mayor, I have to defer to the ordinance and the process. That means the preservation commission is ultimately the authority.

“It will be an uphill climb for this board to approve murals. It is going to be difficult to get murals approved downtown in the historic district,” Hazlip said.

“I’m very glad the city under our city planner’s leadership is now looking at this issue. I’ve been told it’s too early to discuss what guidelines they may recommend to the mayor and Board of Aldermen, so in the meantime, I ask that everyone be patient. I would like to remind everyone that until such guidelines are established, we all must abide by the rules that are currently in place.”

Gibson said the city is aware that violations to the ordinance have taken place in the city.

“We are grateful that the city now has a new city planner whose goal is to ensure our ordinances are followed and enforced,” he said. “We understand she is looking into all ordinances and all cases where violations may have happened and we look forward to seeing the situation wherever it occurs addressed soon.”