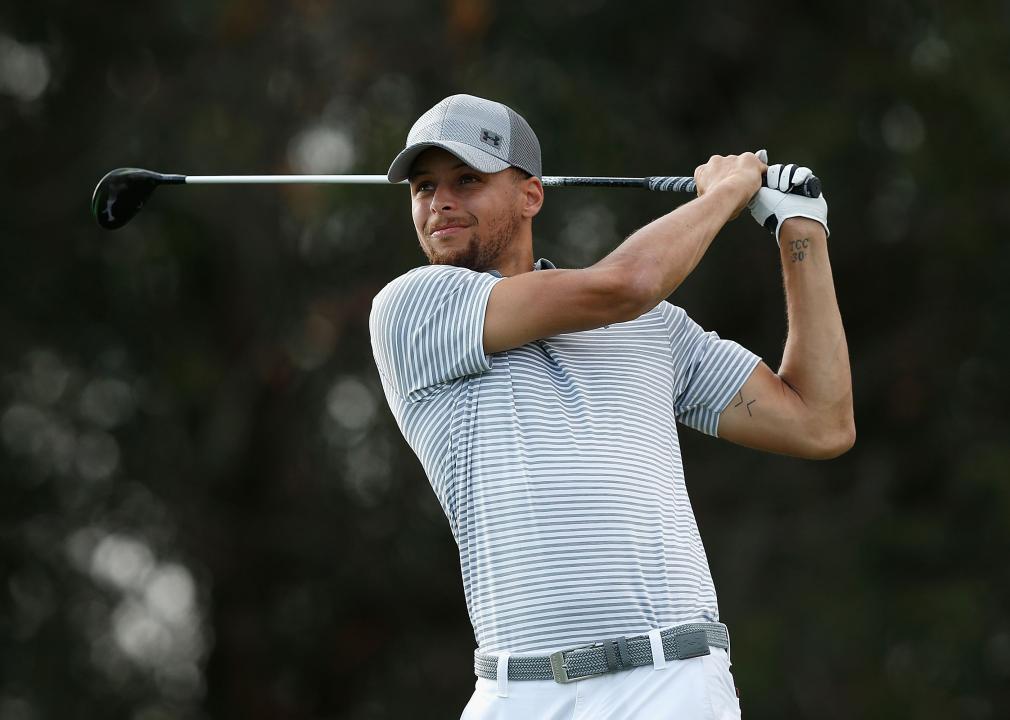 The idea of spending your retirement on the golf course is popular among professional athletes–and not just golfers coming off the PBA. No, we mean players in the NBA, NFL, MLB, NHL, and other sports who relax by golfing during the offseason, then golf year-round once they retire from their respective sports.

There are a few reasons why many are quite good—almost as good as golf pros, in some cases. First, they typically retire at 35, so their physical capabilities are still at a high level. Second, being highly conditioned and trained athletes for most of their lives, they can fine-tune their physical and technical skills far more quickly than your average weekend golfer who worked for decades at a desk job. Third, celebrity tournaments give them a way to keep competing, even if it’s not in their best sport.

Athletes already possess most of the tools needed to excel in golf: dedication, focus, hand-eye coordination, core strength for long-ball drives, and all-around fitness. Not to mention the time and money to burn on the fairways and driving ranges under the guidance of top pros.

Based on news reports and web research, Curated compiled a list of current and retired professional athletes who also excel at golf. The athletes listed here are sorted alphabetically by last name. 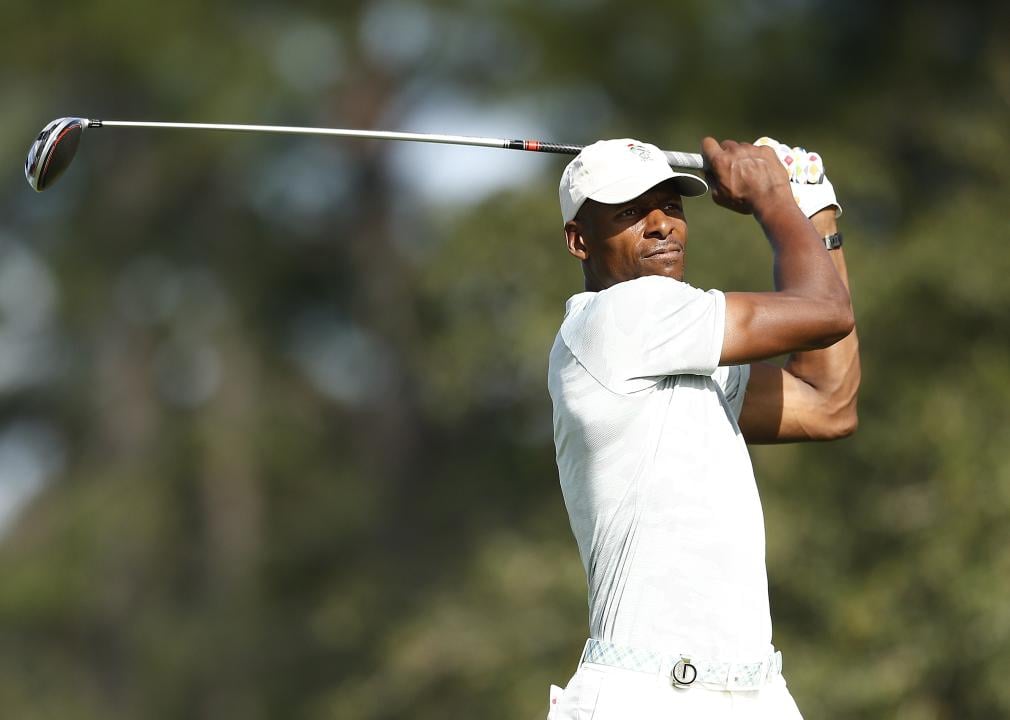 There are a bunch of numbers that Ray Allen is deservedly proud to call his own. Just for starters, his 40% three-point percentage puts him among the best shooters in the NBA, and he is second only to Stephen Curry on most three-pointers scored in an NBA Finals. But he also speaks with pride about another number: 63. That’s his best round of golf, and the same hand-eye coordination that helped him sink an NBA-record 2,973 three-pointers over an 18-year NBA career now boosts his putting game. 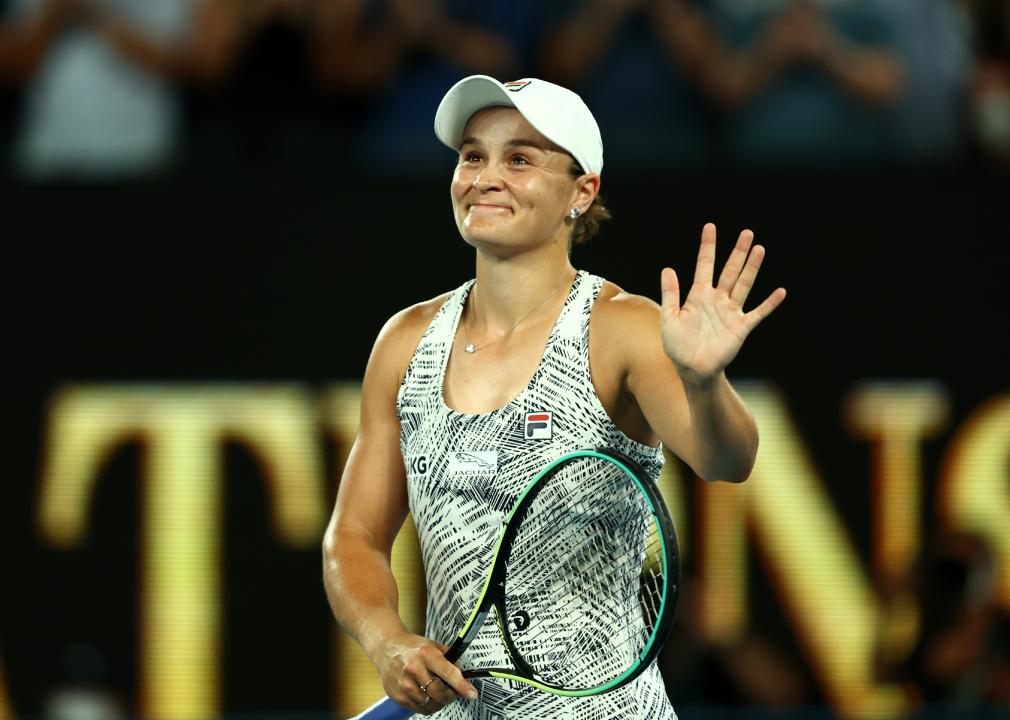 Ash Barty elicited a collective gasp from tennis fans when the winner of three Grand Slam titles retired from professional tennis in March 2022. The 25-year-old was in her prime, having won the Australian Open in January, and retired while ranked #1 in the world, a ranking she’d held since 2019.

Garnering less attention was the Aussie’s shift to what may be her next sport: golf. She has already agreed to play the Icons Series USA tournament this summer in New Jersey against fellow celebrities and has reportedly lowered her handicap to 4. 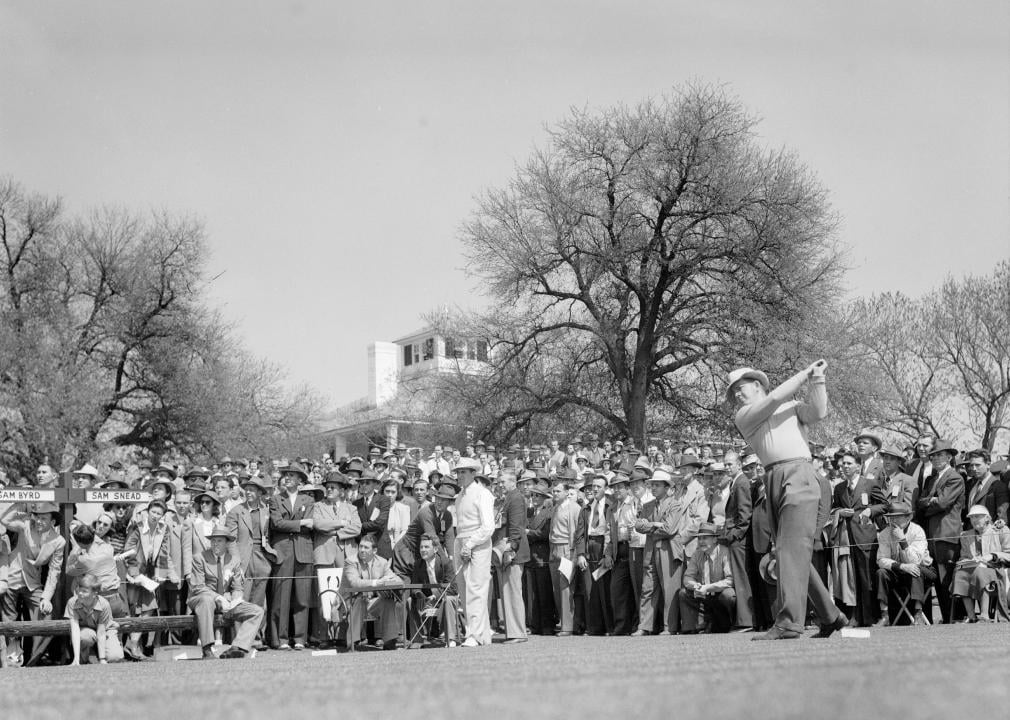 Sammy Byrd’s claim to fame as a baseball player was that he replaced Yankees teammate Babe Ruth in left field during the ninth inning of Game 4 of the 1932 World Series. Byrd never fielded a ball or batted in the Series, which was Ruth’s last—and the site of his “called shot” home run in Game 3. But Byrd had one accomplishment that Ruth never touched. After retiring from baseball at age 29, Byrd went on to win six PGA tournaments and become the only person to play in the World Series and the Masters, placing third and fourth at the 1941 and 1942 Masters. 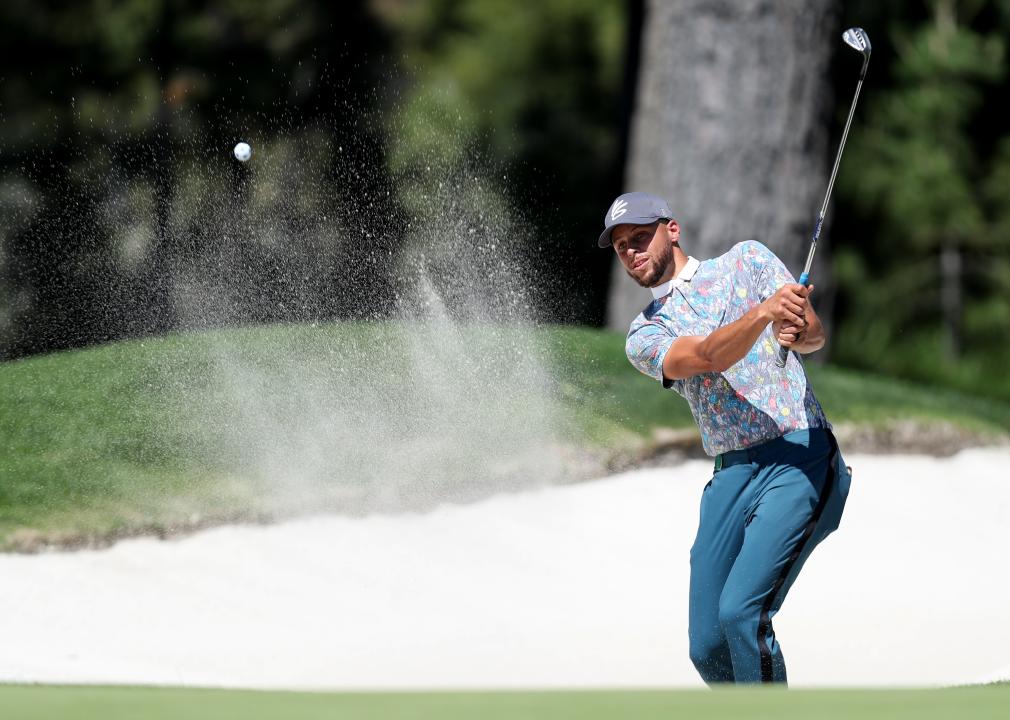 Stephen Curry has had a passion for golf ever since he tagged along with his father, Dell Curry, who was also an NBA star and golf enthusiast. He sneaks in rounds even during the season and golfs often in the offseason.

The same fine motor skills that make Curry the finest three-point shooter in history—42.8% in the regular season—make him a golfer talented enough to perform well at celebrity pro-am tournaments and, twice, the Ellie Mae Classic pro tournament. Curry’s handicap is an impressive plus-1.5—better than scratch—suggesting that a PGA career is possible after he tosses his mouthguard aside. 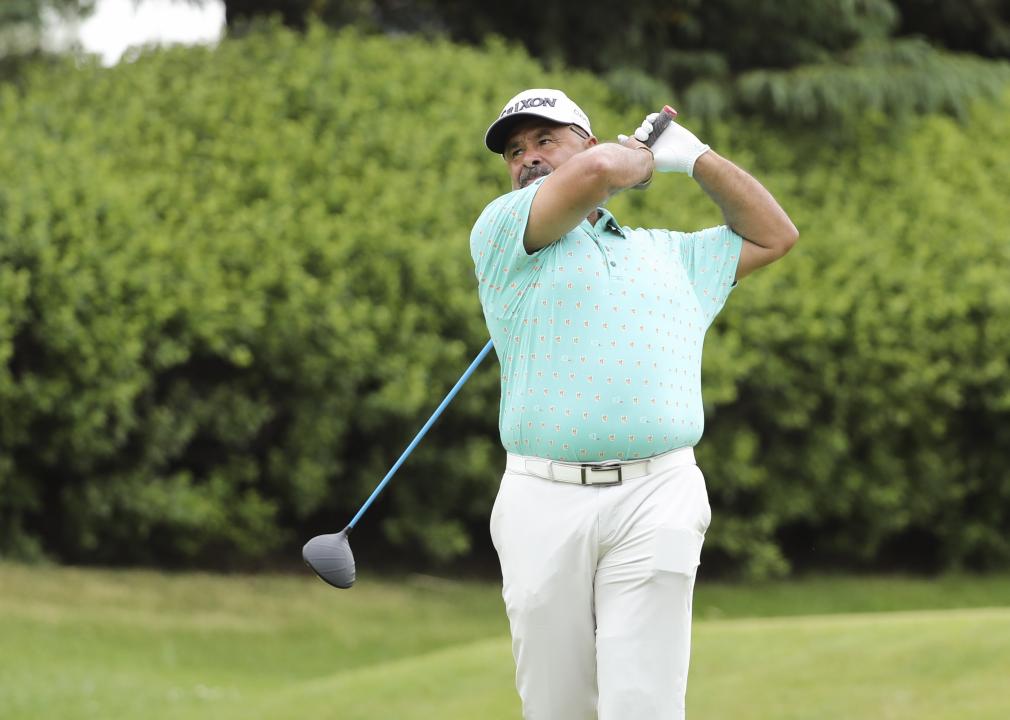 The legendary Wayne Gretzky and goalie Grant Fuhr led the Edmonton Oilers to four Stanley Cup titles in the 1980s. Like Gretzky, Fuhr worked on his golf game during the offseason and after his Hall of Fame NHL career ended in 2000. Besides winning celebrity golf tournaments, Fuhr has played at Canadian (now Mackenzie) and Web.com Tour events and now lives and plays regularly in golf-mad Palm Desert, California. 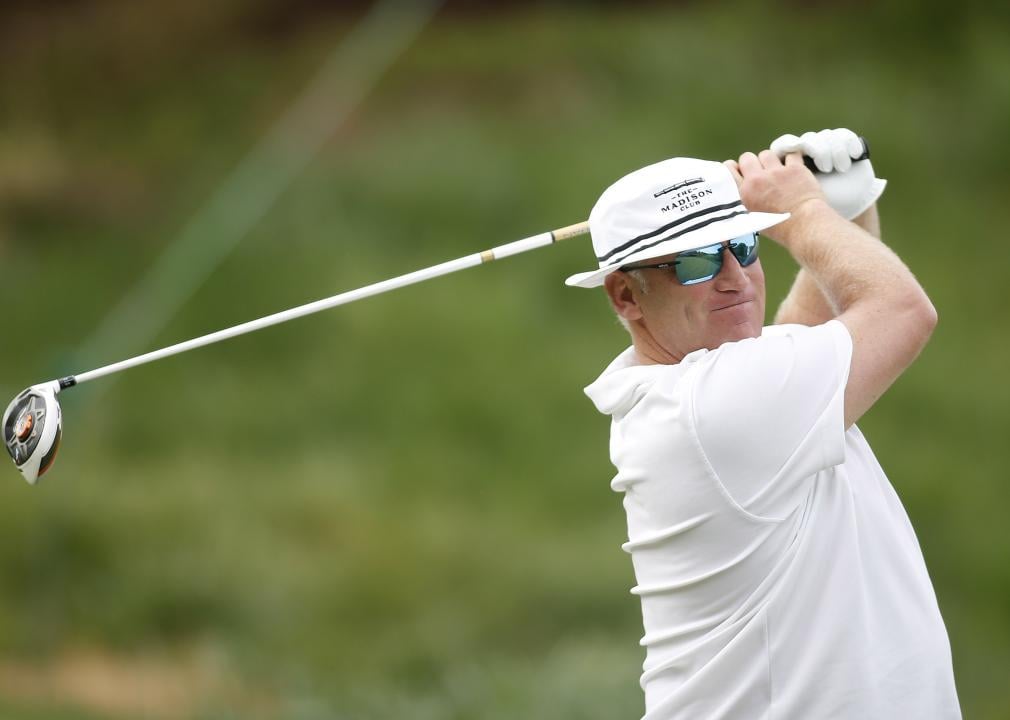 Brett Hull joined his father Bobby in the NHL Hall of Fame in 2009, a well-deserved honor for the man who scored more goals (86) in one season (1990-91) than anyone in NHL history not named Gretzky. Shifting from the ice to the green, he insists that he golfs so well largely because scoring on difficult slap shots is similar to slapping a golf ball onto the green. After retiring from the NHL, he improved his handicap to plus-1 and even won an amateur tournament. 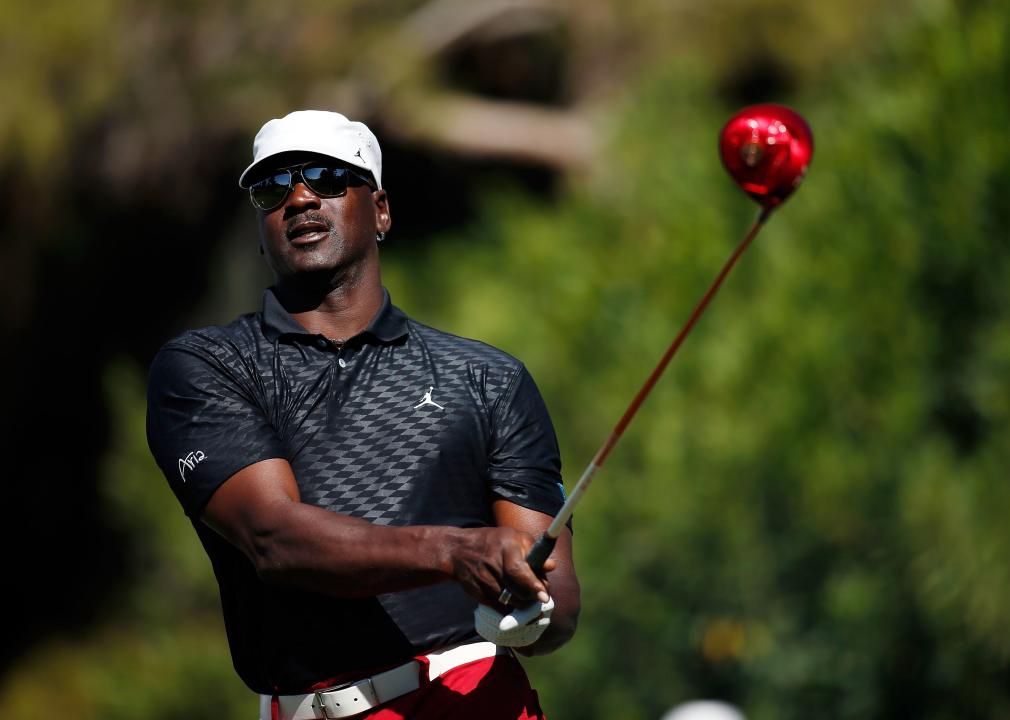 One of the biggest stories in sports in 1994 was NBA legend Michael Jordan’s short-lived professional baseball career, when he spent one so-so season in the minors playing right field. That failed experiment prompted him to return to basketball to bring three more NBA titles to the Bulls. But Jordan has a soft spot for a third sport. Jordan’s golf game is solid enough that he’s played with Tiger Woods and is reportedly fond of betting on games with pals such as PGA Tour winner Rickie Fowler and actor Samuel L. Jackson. 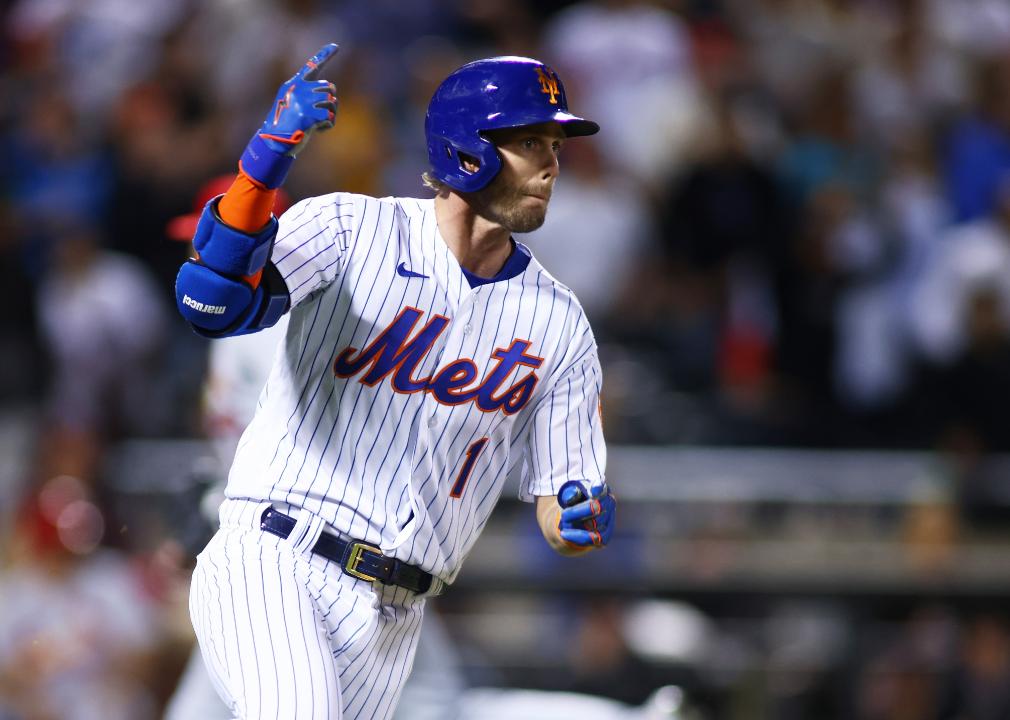 When Jeff McNeil had to choose between the spring sports of baseball and golf in high school, he chose golf. Despite a solid career as a high school golfer, he had no scholarship offers except one from Long Beach State for baseball—based solely on his summer club play—so that became his sport. This eventually led to his representing the Mets on the 2019 All-Star team. He still golfs well enough to drive the ball 300-plus yards and has a career batting average of .300-plus—probably making him the only member of the 300/.300 Club. 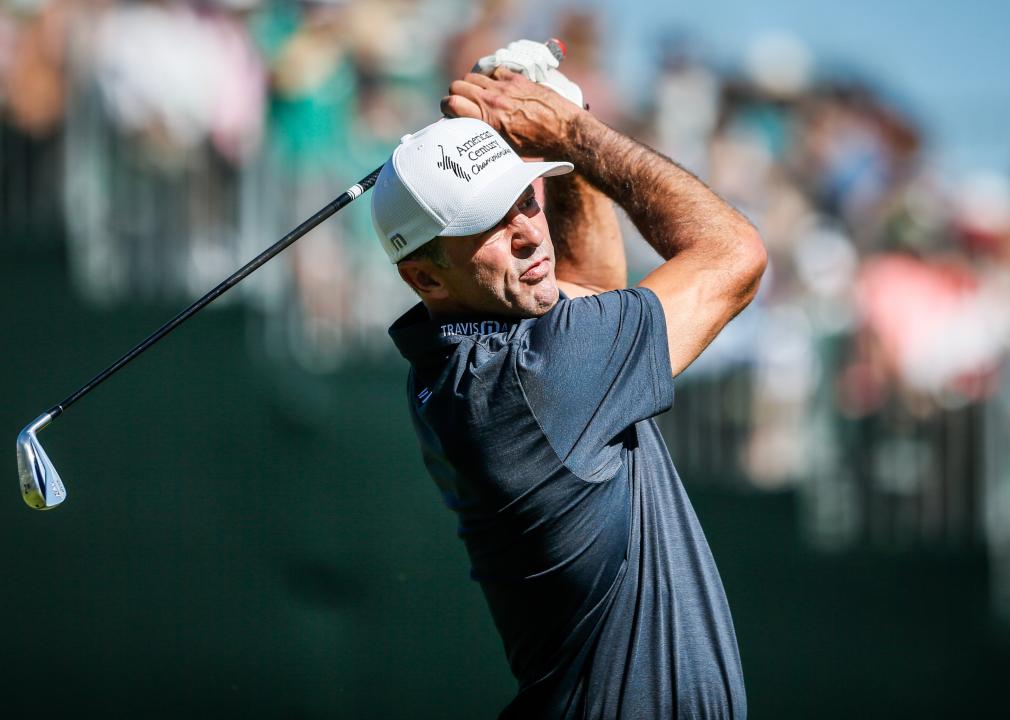 Mike Modano may not be the best golfer to ever play in a celebrity tournament, but among non-PGA pros, he shot one of the best holes ever. His double eagle on the 205-yard 18th hole of the 2021 American Century Celebrity Golf Championships in Stateline, Nevada, was the first ever recorded as he putted in with a 2 on the par-5. That tied the NHL Hall of Famer for the lead with baseball Hall of Famer John Smoltz after the first round, though he faded to eighth, just ahead of Stephen Curry. In his 22 seasons, mostly for the Dallas Stars, Modano scored more goals (561) than any American-born NHL player. 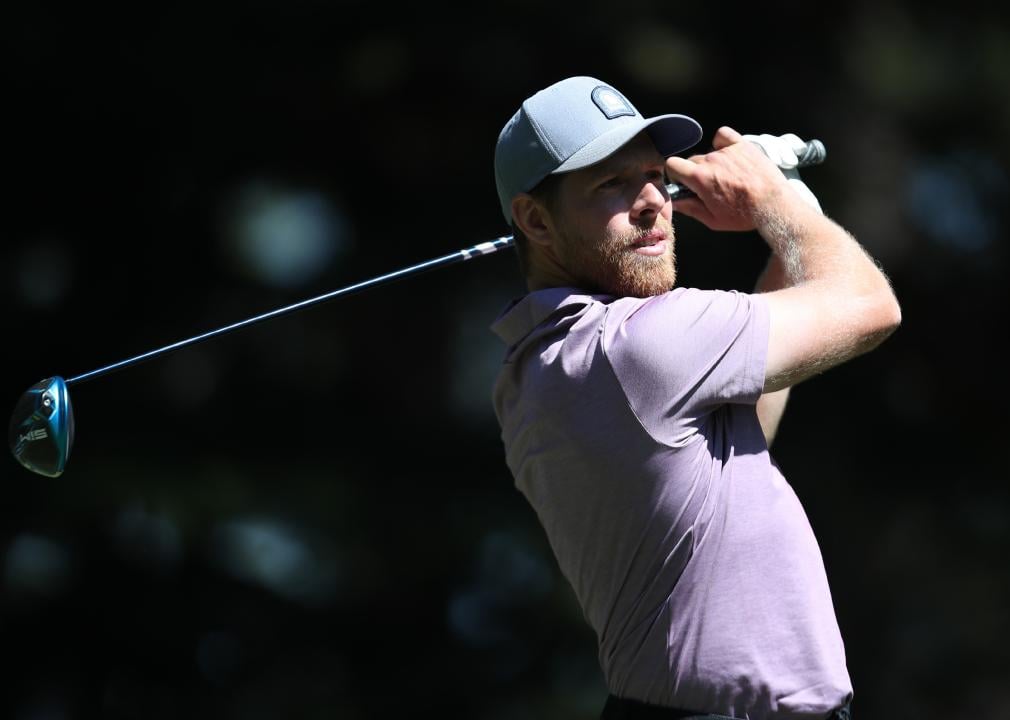 How do you follow up after leading your team to the Stanley Cup Finals? In San Jose Sharks star Joe Pavelski’s case, you go to the American Century Celebrity Golf Championships the next two summers and show off your multi-sport skills. Pavelski not only placed 11th in 2016 but shot a first-round, even-par 70 and tied for 12th in 2017. He also swished some three-pointers and kicked a football into Lake Tahoe to show off for fellow competitors Stephen Curry and Aaron Rodgers. 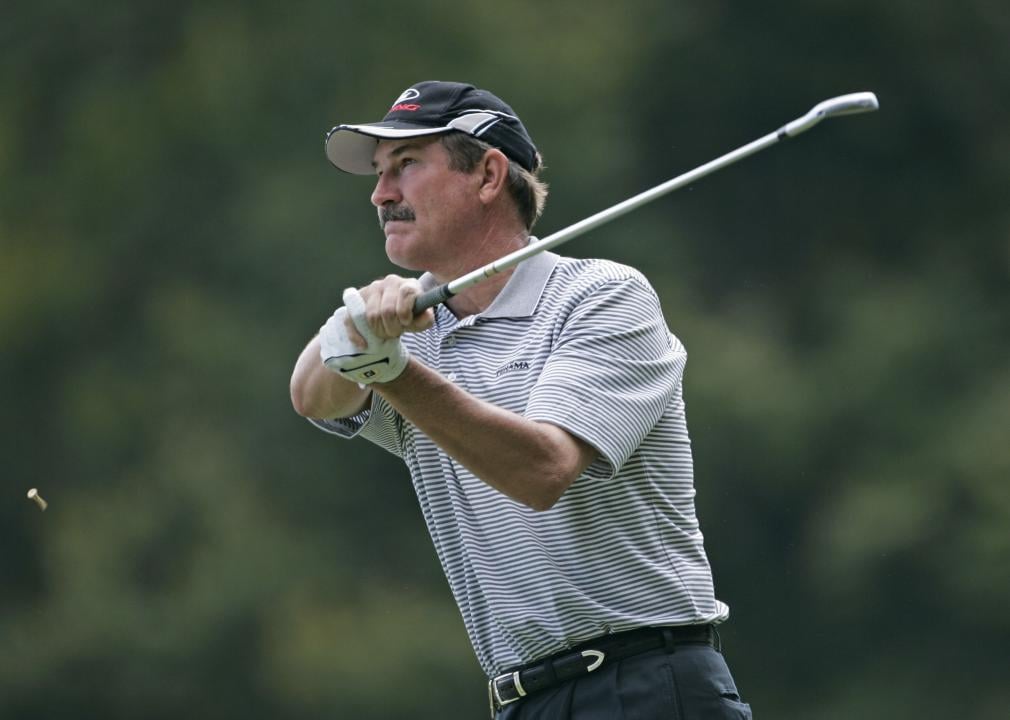 Few two-sport athletes have performed as well in both sports as Rick Rhoden, a Major League pitcher—and .238 career hitter—for 16 years. Rhoden turned into a scratch golfer even before devoting himself exclusively to the game. Rhoden was an All-Star for the Dodgers and Pirates, once winning 13 straight games in a single month. 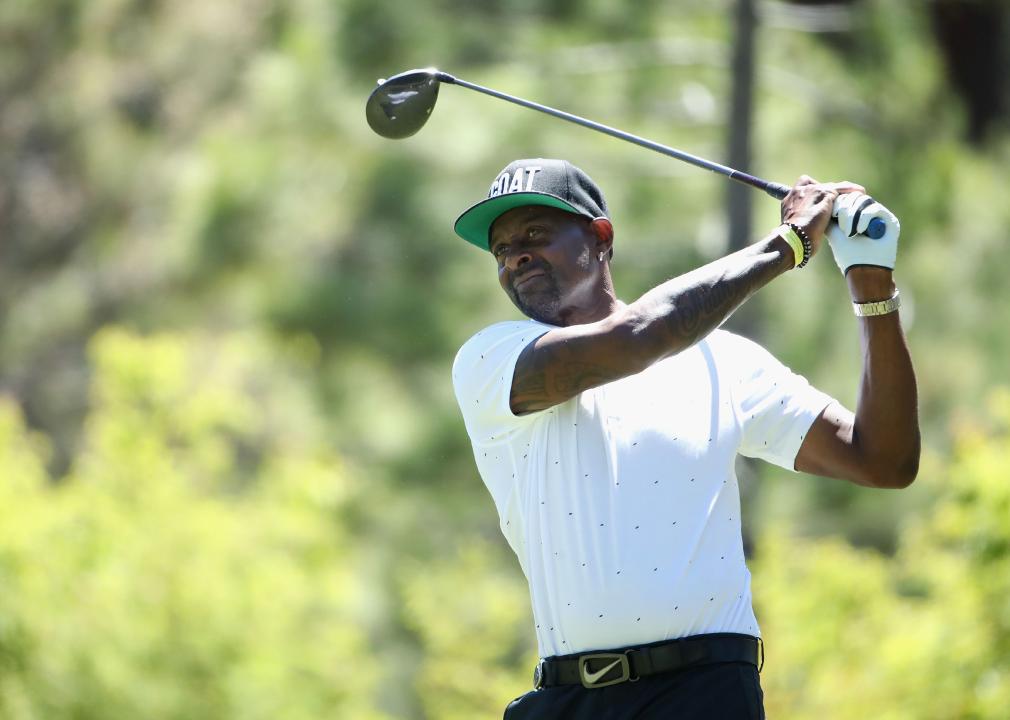 Jerry Rice has become a regular at the American Century Championships, the premier celebrity golf event, and will compete at the Nevada tournament again July 6-10, 2022. But he picked up golf as a training tool way back in 1986, the first of six years that he led the NFL in receiving yards. Rice instantly took to the challenge of improving in a sport that requires a high level of skill rather than toughness and physical prowess and began golfing on non-practice/non-game days. He’s carried a 1-handicap as of 2017. 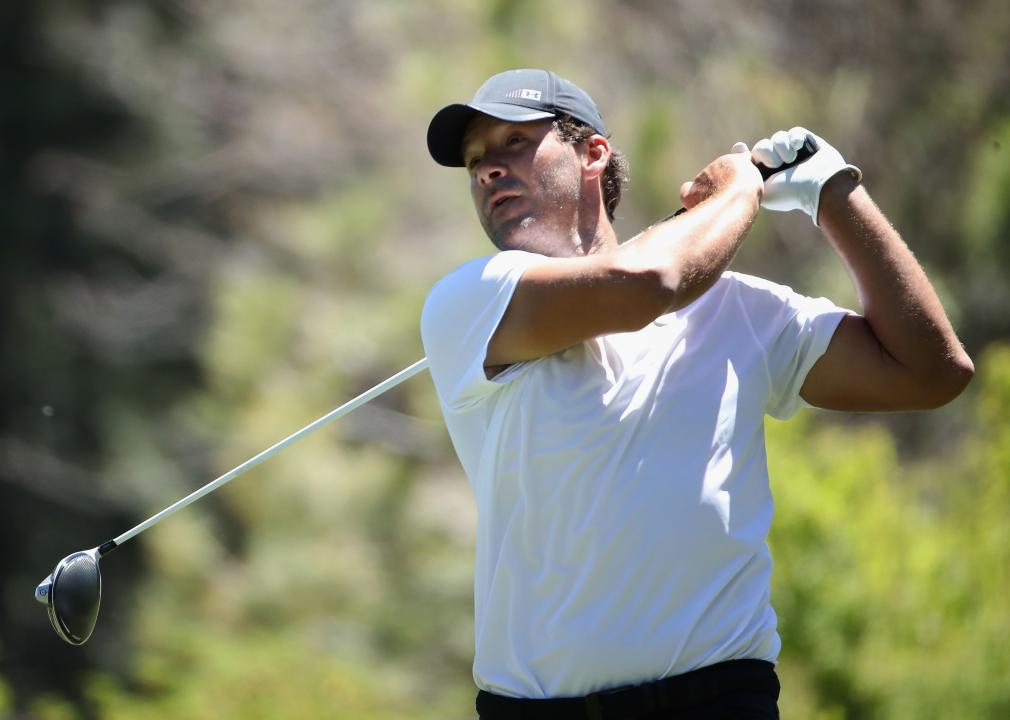 Tony Romo wears so many hats—including backwards ball caps—that he should open a hat shop. The former Walter Payton Award-winning college quarterback and Dallas Cowboys QB, current CBS Sports broadcaster, and father of three is also a darn-good golfer. Romo won the American Century Championships celebrity tourney in 2018 with a come-from-behind 68 final round and again in 2019, with a wire-to-wire win by 10 strokes. He’ll compete at the same pro-am tournament in July 2022. Romo has numerous Cowboys team records and holds the NFL record with six for the most games in a season with a passer rating of at least 135. 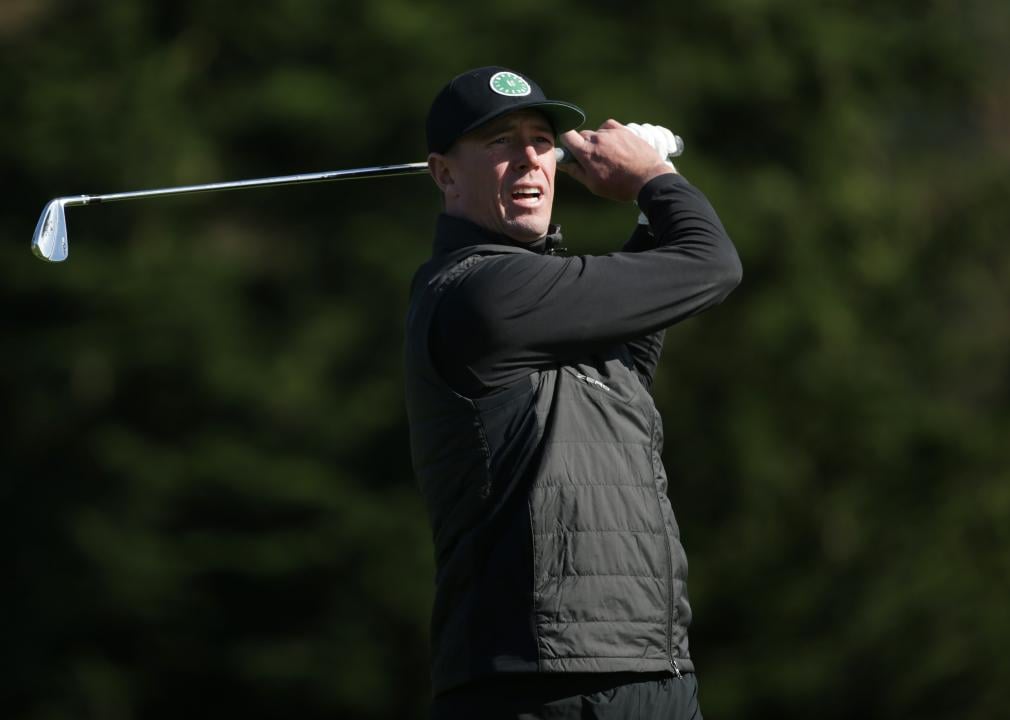 The big story in the NFL in March 2022 was the trade of longtime Atlanta Falcons quarterback Matt Ryan to the Indianapolis Colts. The Colts were thrilled to sign the QB, who has the NFL record for most passing yards in his first 14 seasons with 59,735 yards and an exemplary 65.5 career completion percentage. But you can bet that Ryan is already scouting golf courses in Indy as he makes the move. Reigning Super Bowl champion Matt Stafford, Tony Romo, and Aaron Rodgers are among the fellow quarterback legends who Ryan golfs with during the offseason and at celebrity tournaments, where he’s notched a 65 best round. 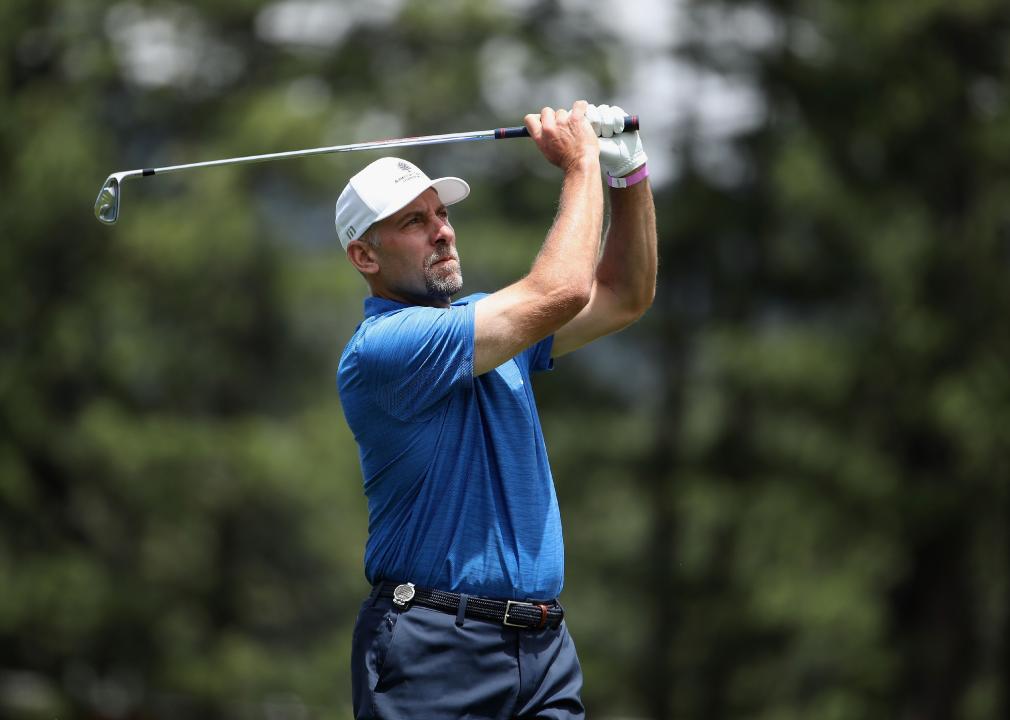 Hall of Famer John Smoltz pitched for 20 years for the Atlanta Braves and was named to eight All-Star teams. Given his enthusiasm for golf, he’s likely to play his second-favorite sport for at least another two decades. Smoltz once told PGATour.com that many of his best shots are when he has to fit the ball through a small opening while hitting out of woods—the same way Smoltz used to pitch when he needed the baseball to hit a specific spot in the strike zone. Nowadays, he keeps busy as a baseball announcer—calling every World Series since 2016—when he isn’t playing celebrity and seniors tournaments or golfing with stars like Tiger Woods and Annika Sörenstam. 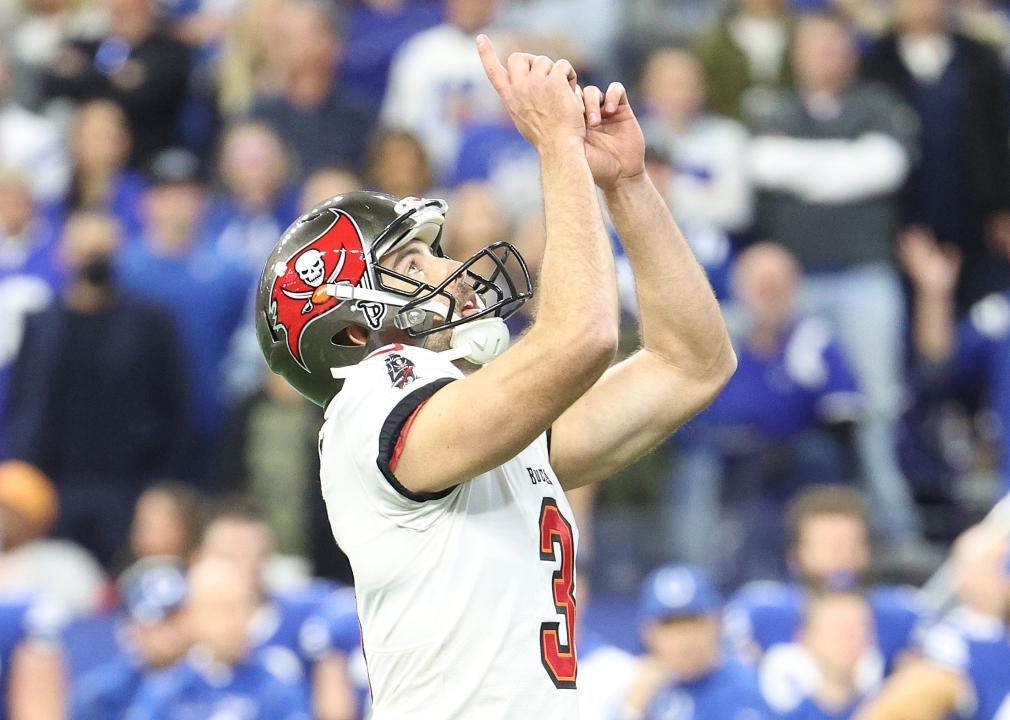 Many field-goal kickers excelled in soccer as kids—for obvious reasons. But it’s a little surprising that one of the best kickers in the NFL plays golf so well, a sport that uses the arms and hands rather than the legs and feet. Ryan Succop grew up with golf, playing on a high school state championship team and then returning to it while playing in the NFL. He improved to become a scratch golfer by 2015, six years after being selected dead last in the NFL Draft, and proved himself as an elite kicker by setting a Tampa Bay record for most points scored in a season (136) during the Tom Brady-led Buccaneers’ Super Bowl-winning season in 2020.