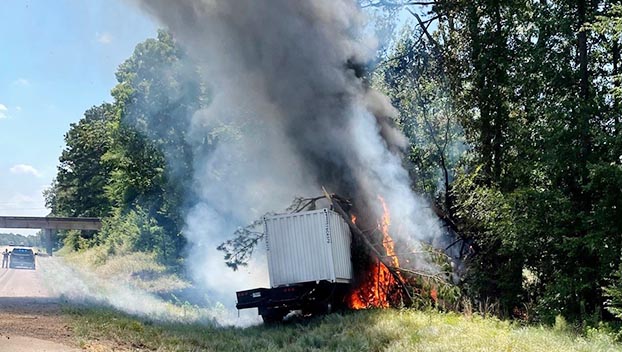 A Mississippi deputy rescued a truck driver and family from a fiery two-car wreck on the interstate Friday.

Shack was driving eastbound around mile marker 62 on Interstate 20, when he drove up on an accident that had just occurred. It appeared an 18-wheeler and a passenger vehicle had crashed and were off the shoulder of the road in a wooded area.

The 18-wheeler cab was fully engulfed in flames and the fire was spreading to the trailer. Shack ran to the passenger vehicle where he heard a child screaming. Shack located the child near the passenger vehicle behind a downed tree. Shack picked up the child and removed him from where the fire was. The child’s mother and father were able to extract themselves from their vehicle and followed Shack to safety.

“We are extremely fortunate and very proud to have brave and quick-thinking deputies like Tony Shack serving the citizens of Rankin County and the State of Mississippi,” a Rankin County release said.