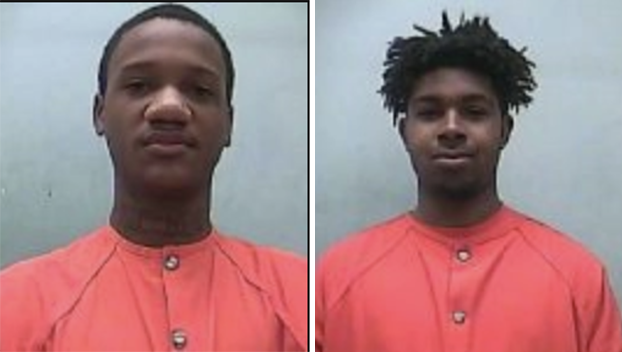 Two Natchez men were sentenced Friday to life plus 10 years in prison for the November 2018 murders of 23-year-old Tavonte White and 21-year-old Alicia Justice.

The victims were reportedly driving on East Franklin Street when their car was sprayed with gunshots. It was covered with bullet holes when it crashed into the brick wall of the Natchez Stewpot before daybreak on Nov. 9, 2018.

Jacqlaurence Jackson, 23, and Jameco Davis, 18, both of Natchez, were convicted of first-degree murder. On Friday, each received two life sentences, one for each murder, to run concurrently with each other plus 10 years for firearm enhancements, District Attorney Shameca Collins stated in a news release.

“(The victims’) car was struck multiple times from different caliber weapons fired from a vehicle occupied by Jackson, Jameco Davis, Kendarrius Davis and Makaileus Johnson,” Collins states. “Although this murder occurred in 2018, it was not solved until last year. Kendarrius Davis entered a plea to 2nd-degree murder and is yet to be sentenced.”

Johnson, 18, was reportedly shot and killed in December 2018. In that same incident,  Xavier Jenkins, 18, was shot in the leg with what authorities said appeared to be a high-powered rifle. Authorities later recovered a cache of weapons near the scene that they said could have been used in the shooting. They were all teenagers when the shootings occurred.

“Cold cases are hard to solve and hard to prosecute because people move and memories fade,” Collins said. “This was an exceptional job of the Natchez Police Department. For the families of these victims, justice was delayed but not denied.”