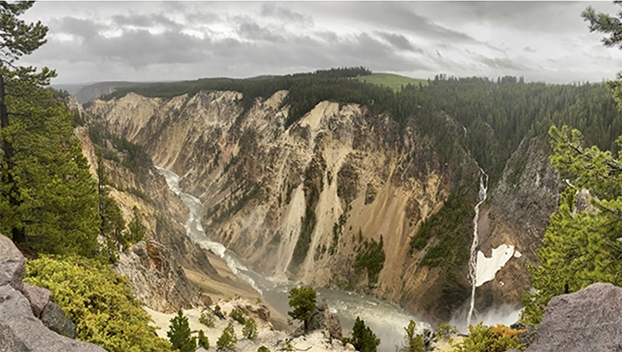 The first day that the Huff family spent in Yellowstone National Park it was raining lightly. Their arrival was just short of a week before unprecedented rainfall caused the first parkwide closure in 34 years.

The trip was partly inspired by the TV series “1883” about a family fleeing Texas to a better life in Montana, Angie Huff said. A week into the Natchez family’s trip, the Huffs found themselves fleeing Gardiner, Montana to Billings, Montana. It was an unintentional and distorted reenactment of their inspiration.

“The rain was so light, nobody thought it would turn into what it did,” Huff said about the first few days of their vacation, beginning June 10. With her husband and two of three kids, Huff found the weather to be a kind reprieve from the mugginess in Mississippi, and gentler than the torrential rain they’ve become accustomed to.

They took family pictures at Norris Springs and Old Faithful, and then wildlife pictures. Bears, elk, moose and foxes appeared on their drive through the eastern part of the park.

At 10,000 ft of altitude while driving near the eastern entrance, rain became more aggressive and they became worried about snow coming off the side of the mountain, Huff said.

When they got to Gardiner, still part of their vacation plan, Huff said they “thought everything was fine.” They soon realized, as they navigated the side roads adjacent to torn bridges and drove past cars totaled by rock avalanches, that their circumstances might have changed if their drive had been scheduled differently.

Gardiner is near the northern entrance to the park, where the most damage from flooding is. A highly circulated video, of a house falling into the river, was filmed just north of the condo the Huffs had rented.

Huff remembers her husband spotting a fridge coursing through the river. Then came a door, lumber, trash. They figured it was from that house in the video.

“That Yellowstone River is no joke,” Huff said about the rushing currents even before the flooding.

“We imagined it eating away at roads, bridges, dirt,” she added.

Huff watched an interview with the ranger who’d owned the house which got swept away. “He was distraught,  it was sad,” she said.

The only grocery store in Gardiner was overrun and there were no hotel rooms available for the 10,000 evacuees.

“People really came together,” Huff said about the immediate aftermath of the flooding. The grocery workers remained patient while emergency services canvased residences.

“We had to wait until the waters receded to know anything,” Huff said. In the meantime, personnel showed up at their door to share advice and directions to a Facebook page where their questions could be answered in a virtual flood-weary community.

The owners of their condo, cattle ranchers from across the highway, were also attentive.

“They constantly checked the erosion situation below us and even said if they felt like we needed to evacuate, our family and the rest of the renters could stay at their ranch,” Huff said.

Churches began to set up emergency aid like Huff’s church, First Baptist, did in the wake of Katrina, she said.

“If you’re going to get stuck somewhere this is the place,” Huff said.

“Be patient,” Huff said for those wanting to visit Yellowstone amidst the massive closures, “it is so beautiful.”

They will finish their vacation in Rapid City, South Dakota and then return, home partly relieved, partly enriched.