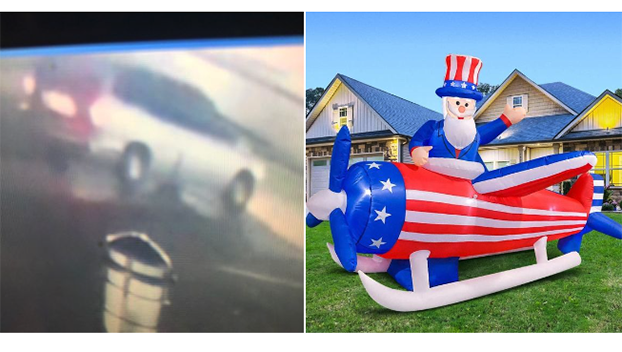 Ice cream may be the sweetest revenge for a Mississippi businessman who wants his inflatable Uncle Sam back after thieves stole the decoration in front of his business.

Tate Hobdy, owner of the Dairy Queen Grill & Chill in Natchez, posted about the theft on social media Friday morning.

“So night before last some people in a white or silver SUV stole the inflatable Uncle Sam in an airplane from Dairy Queen Grill & Chill. I’ll keep my personal feelings about thieves aside,” Hobdy said.

Instead of ranting and raving about the theft, Hobdy took a different approach — offering free ice cream to the person who helps recover and return the Fourth of July inflatable.

“However, let’s turn this into an Independence Day scavenger hunt. #FindUncleSam Whoever returns Uncle Sam will win an Oreo Blizzard Ice Cream Cake for their 4th of July Celebration,” Hobdy said. “Information as to Uncle Sam’s where abouts will get you a free small blizzard.”

Hobdy said he wanted to keep positive during the situation and

“If the people that stole it want to just return it we’ll call it a wash. And don’t go stealing these out of people’s yards if you happen to see them. I want to keep this positive and fun,” Hobdy said. “Message me if directly if you have information. #FindUncle Sam!”

“I hope everyone has a safe and fun Independence Day!” Hobdy said.