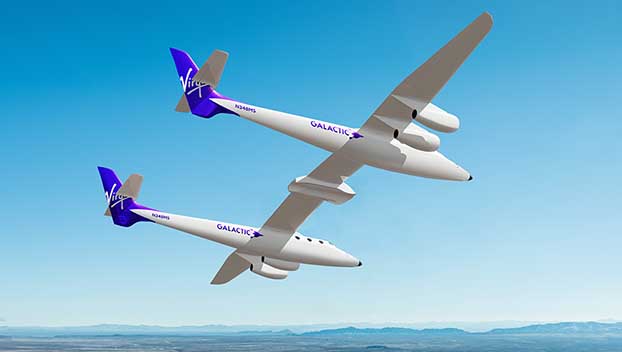 Virgin Galactic announced Wednesday that it is partnering with a Boeing subsidiary to manufacture the next generation of the twin-fuselage aircraft used to carry aloft the space tourism company’s rocket ship.

Aurora Flight Sciences will build two of the special carrier planes at its facilities in Mississippi and West Virginia. Final assembly still will take place at Virgin Galactic’s facility in Mojave, California, with the first mothership produced under the contract expected to enter service in 2025.

Each of the aircraft will be designed to fly up to 200 launches per year.

Virgin Galactic officials said that outsourcing the work will provide access to labor, minimize supply chain disruptions and lead to faster production times. The company has repeatedly pushed back the timeline for launching paying customers, with commercial service now expected in 2023.

Virgin Galactic CEO Michael Colglazier said the next-generation motherships will be integral to scaling up the company’s operations.

“They will be faster to produce, easier to maintain and will allow us to fly substantially more missions each year,” he said in a statement. “Supported by the scale and strength of Boeing, Aurora is the ideal manufacturing partner for us.”

Virgin Galactic had assessed different aerospace manufacturers early in the process, but opted for Aurora in part because of its history of building cutting-edge aircraft. It has designed and built a new aircraft nearly every year for the past three decades.

Aurora and Virgin Galactic have been working for the last several months to develop design specifications as well as workforce and manufacturing requirements.

After reaching nearly 50,000 feet (15,000 meters), Virgin Galactic’s space plane is released from the carrier aircraft and drops for a moment before igniting its rocket motor. It shuts off once it reaches space, providing passengers with silence, weightlessness and a view of Earth below. The rocket ship then glides back to the spaceport runway.

It’s been nearly a year since Virgin Galactic launched founder Richard Branson and five Virgin Galactic employees toward the edge of space as the British entrepreneur raced to beat fellow billionaire Jeff Bezos and his rocket company Blue Origin.

Just weeks after the flight, Virgin Galactic reopened the ticket window, with prices starting at $450,000 a seat. By the fall, the company put off a planned research flight with members of the Italian air force and began scheduled assessments and maintenance of its aircrafts.