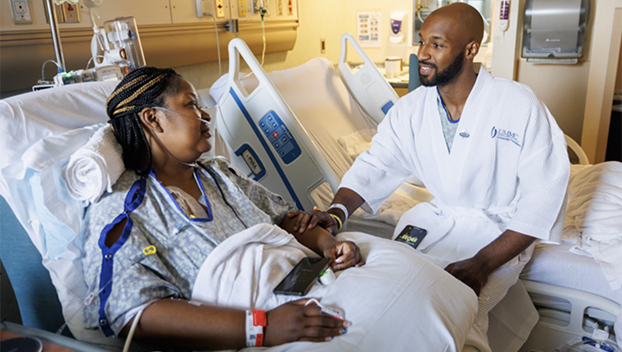 Quinten Hogan makes sure his mom, Tawanna Davis, is doing well following surgery June 28 in which Hogan gave his mom his left kidney. The next morning, both were doing well and preparing to return home later in the week. Joe Ellis/ UMMC Communications

When her kidney failure got to the point that Tawanna Davis was attached to a dialysis machine three times a week, she knew the next step was a transplant.

On June 28, her 25-year-old son and only child, Quinten Hogan, made that possible when his left kidney was nestled into his mom’s abdomen. Not only did 45-year-old Davis get a second chance at life, she and her son made history at the University of Mississippi Medical Center.

From left, Tawanna Davis, son Quinten Hogan and Hogan’s stepdad, Spencer Davis, savor a group hug before Hogan was taken to surgery for removal of his left kidney to be donated to his mom.
Davis received the 3,000th organ transplanted at the state’s sole academic medical center and transplant program. The first came in June 1963, when Dr. James Hardy performed the world’s first human lung transplant.

“Any day that you do a live donor surgery, it’s a great day,” said Dr. Christopher Anderson, the James D. Hardy professor and chair of UMMC’s Department of Surgery. “Living donation is such a wonderful gift. It changes many lives – not just the recipient and the donor, but the whole family.”

Dr. Christopher Anderson removes the left kidney of live donor Quinten Hogan so that Dr. Felicitas Koller can implant it into the abdomen of Hogan’s mom, Tawanna Davis.
“To do a live donor transplant on this occasion was extra special,” Anderson said. “This is a landmark number, and it’s telling that the majority of those have been done in the last decade. It speaks to the institutional commitment for transplant in the state of Mississippi.”

Because she received her kidney from a living donor, Davis got her transplant mere months after the decision was made. The Mississippi Organ Recovery Agency says that of the 1,300 Mississippians waiting for an organ transplant, about 900 need a kidney – and most of those won’t get one for an average three to five years.

Hogan’s surgery ended at about 11:30 a.m. His mom’s began about an hour later, and her son’s kidney turned pink and immediately began producing urine as Koller completed the surgery.

Koller, associate professor of transplant surgery, reassures Tawanna Davis just before she’s rolled to surgery. Koller transplanted into Davis’ abdomen a kidney donated by Davis’ son, Quinten Hogan.
From start to finish, the combined procedures took about eight hours. But, Anderson, Koller and UMMC’s other transplant surgeons don’t do it alone. Before, during and after surgery, patients receive care from a plethora of providers and departments, too many to name.

Davis’ kidney is among the 2,246 transplanted at the Medical Center. UMMC also has transplanted approximately 356 livers, 338 hearts, 11 lungs and 49 pancreases. Some recipients have received more than one organ, or half of a liver split between two persons.

It was December 2021 when Davis, a former corrections officer who battled hypertension and diabetes for years, was hospitalized at UMMC for 11 days. After her release, she began dialysis in Waynesboro for three and a half hours, three times a week.

Davis, who copes with multiple sclerosis, didn’t always feel well. “You could tell by the way I was breathing that I was tired,” she said.

Koller, right, lifts the left kidney of live donor Quinten Hogan from a cold solution before transplanting it into the abdomen of Hogan’s mom, Tawanna Davis.
Hogan, who now lives in Atlanta, had been watching his mom’s health. In October 2021, he decided to get bloodwork done to determine if he’d be a match to give Davis a kidney.

“I had my mind made up a year and a half ago. It really wasn’t a tough decision,” Hogan said. “We threw it up in the air once or twice, but she always said it would be the last option unless push comes to shove.

“Push came to shove. Without a doubt, I put myself on the line to give her a kidney.”

Hogan, who graduated from Pearl River Community College and attended Mississippi State University, wasn’t scared to have the surgery. He was scared that he wouldn’t be a match.

Anderson checks in with Quinten Hogan before they go to the OR. Anderson removed Hogan’s left kidney for implantation into Hogan’s mom, Tawanna Davis.
“I was afraid there might be some small thing wrong with me. I knew I had to at least try.”

“He matched up. When he told us, I was in tears. We were all in tears,” Davis said of family members that include her husband, Spencer Davis. “We questioned him to make sure he wanted to do it. That’s a big change. He let us know that he’d made his mind up.

“It was overwhelming. A lot of people don’t match.”

Hogan was well enough to leave the hospital barely two days after his surgery. Davis was discharged July 1, with her stay shorter than many patients who receive a deceased donor transplant.

“I’ve got more spunk in me knowing that I have a child who wanted to donate a kidney,” she said. “I thank God for this. It’s emotional, this being my child.”

“It was beautiful,” Koller said of the transplant. “This momentous occasion being a living donor makes me feel very positive and hopeful for the future.

Quinten Hogan makes sure his mom, Tawanna Davis, is doing well following surgery June 28 in which Hogan gave his mom his left kidney. The next morning, both were doing well and preparing to return home later in the week.
“We’d find it easier if people didn’t end up with end-stage renal disease, but until that day comes, for us to be able to do more live donations and increase access means we can reduce the number of people dependent on dialysis.”

Hogan works professionally in sales and marketing, but is also focusing on a career as a songwriter and independent music and sound design producer. “I want to make music for everybody and everything,” he said. “I want to be powerful. I want to do it my own way.

“It would mean the world to me to be successful and to tell my mom, ‘Hey! Look what I’ve done!’ I don’t want to be saying that to her when she’s in heaven.”

“When I reflect upon this day, the thing that makes me happiest is remembering the people on our transplant team, the new residents, the new medical students,” Koller said a few moments after completing Davis’ transplant.

Davis and Koller, compare cell phone pictures two days after Koller transplanted into Davis the live kidney of Davis’ son, Hogan.
“It’s seeing that the Medical Center has a place for people new to medicine and seasoned in medicine, coming together in the service of a mother and her son. That’s beautiful.”

Hogan is grateful for the gift of life – the life he has, thanks to the woman who bore him.

After her transplant, Davis’ level of creatinine – a waste product in urine that’s a measure of how well kidneys are performing – plummeted from more than 5 to a little over 1. Normal, Koller said, is less than .9.

“It’s amazing to see that one little kidney can do all that work in two days,” Koller said to Davis the day before her family took her home. “That’s a reflection of how a living donor surgery works.”

“I made a good kidney!” Davis told her surgeon.