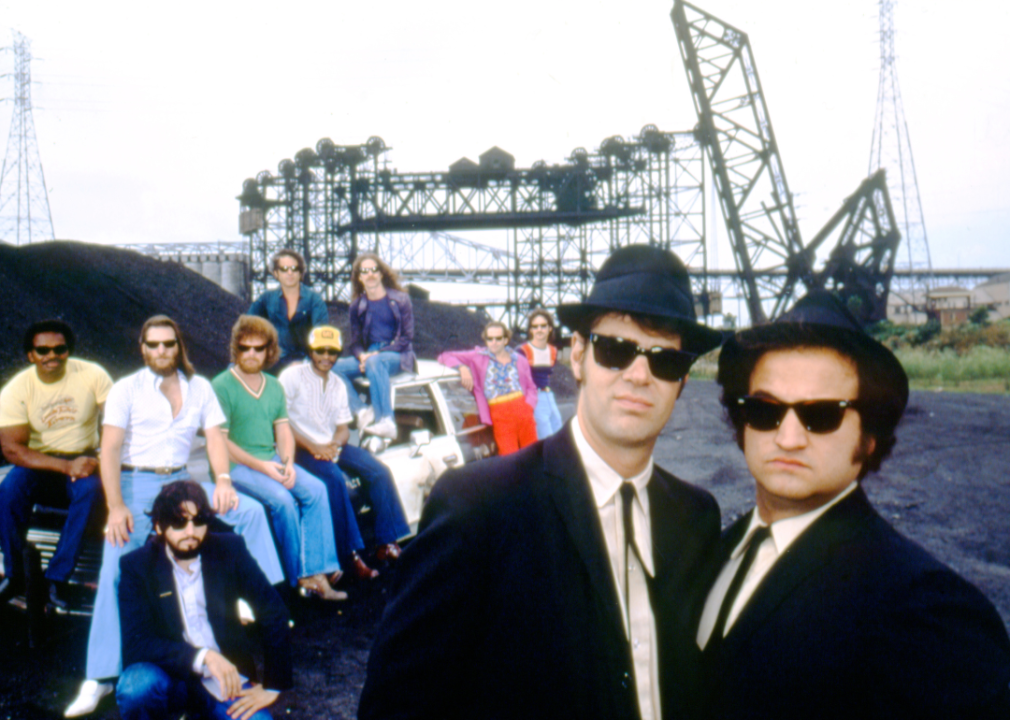 When thinking of the intersection between major US cities and film, images of New York and Los Angeles are the first to come to mind – and for good reason. Outside of being the two biggest cities in America, both have become a haven for trend-setting critically acclaimed films and filmmakers. Spike Lee’s “Do The Right Thing” is a perfect time capsule of 1980s NYC culture, and films like “La La Land” and “Sunset Boulevard” encapsulate what life is like within LA and the film industry.

That being said, the third most populous city in the United States surely deserves the same kind of credit for its filmmaking and cultural significance. Chicago, Illinois, also known as the Windy City, was a leader in both independent film production and film patronage throughout the early 1900s. Even after, when Hollywood was established as the center for filmmaking, Chicago remained vital in its extensive film distribution and theater chains. The 1980s saw the resurgence of filmmaking in Chicago, thanks to hit films like “Ferris Bueller’s Day Off” and “When Harry Met Sally,” and things have only grown since then.

It’s vital to honor such a rich film history as Chicago’s, and to provide a starting place, Giggster researched shooting locations in Chicago and highlighted 10 places across the city from famous films that you can visit—complete with addresses—on a cinematic pilgrimage, from a train station in the Loop to a forested glass house on the outskirts of town. 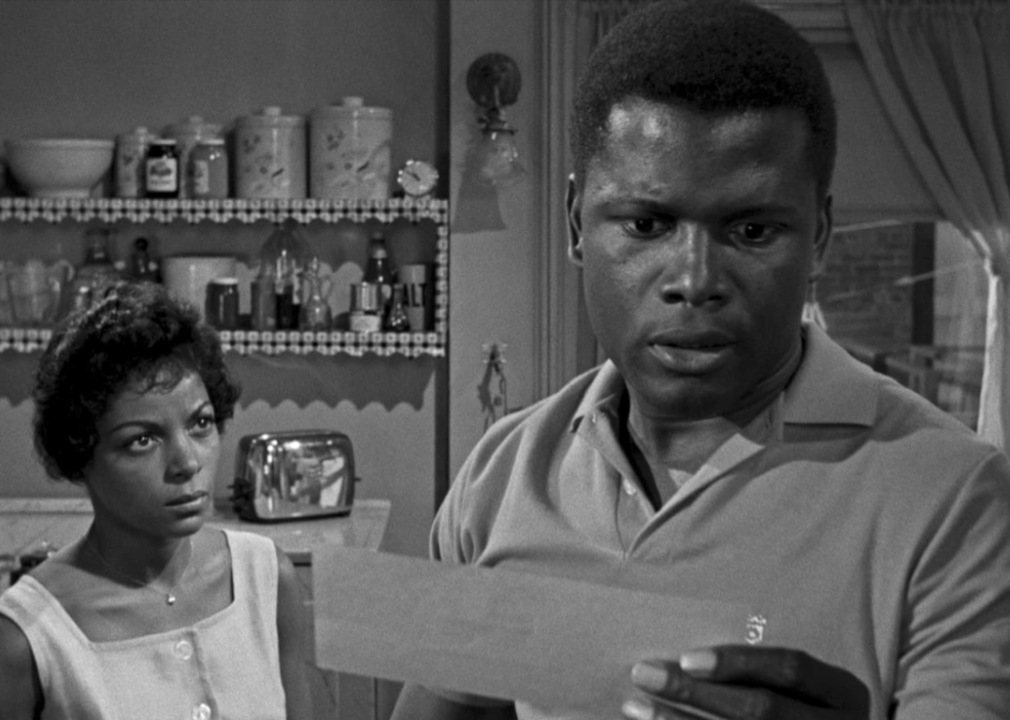 The Younger’s new house in ‘A Raisin in the Sun’

While this house fits snugly in its neighborhood of Austin, Chicago, its iconic use in the film “A Raisin in the Sun” elevates its status from quaint home to racial status symbol. Based on the famous play by Lorraine Hansberry, this 1961 film follows the Youngers, an African American family, as they attempt to move into a higher-income white neighborhood and the racism that follows. The home on Hirsch Street evolves beyond a physical place for them to stay, becoming a metaphor for the Younger’s dreams and the societal status of black Americans in the 1960s. Deliberately shot in black-and-white, the scenes in this home are often lit with a medium-to-high contrast to further illustrate the narrative tension. Austin, Chicago is now a predominantly black neighborhood, but at the time of filming was mostly white – in fact, according to St. Sukie de la Croix, author of the book “Chicago Whispers,” white families in the area protested the idea of an African American movie being shot in their neighborhood. 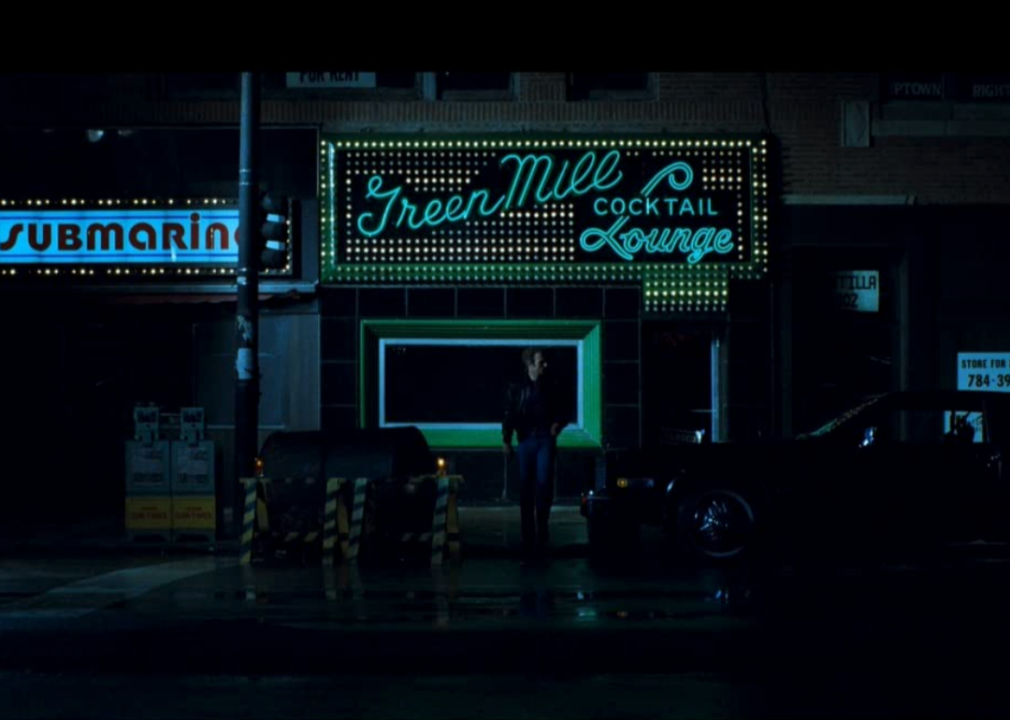 “Thief” is a critically acclaimed gritty neo-noir following one man’s safecracking life of crime, so it makes sense that the gritty bar it filmed in lands on this list. What’s now simply referred to as the Green Mill was once the Green Mill Cocktail Lounge with a notorious history covering over one hundred years. Names associated with the lounge in its early days include gangsters Al Capone and Machine Gun Jack McGurn, and one of its more notable moments saw comedian Joe E. Lewis getting brutally attacked.

Another interesting piece of Green Mill lore directly relates to “Thief,” as director Michael Mann filmed the storefront (likely an identical replica) being blown to pieces. The Green Mill is located in Chicago’s Uptown neighborhood and is considered to be one of the area’s most sought after attractions for tourists and film buffs alike. 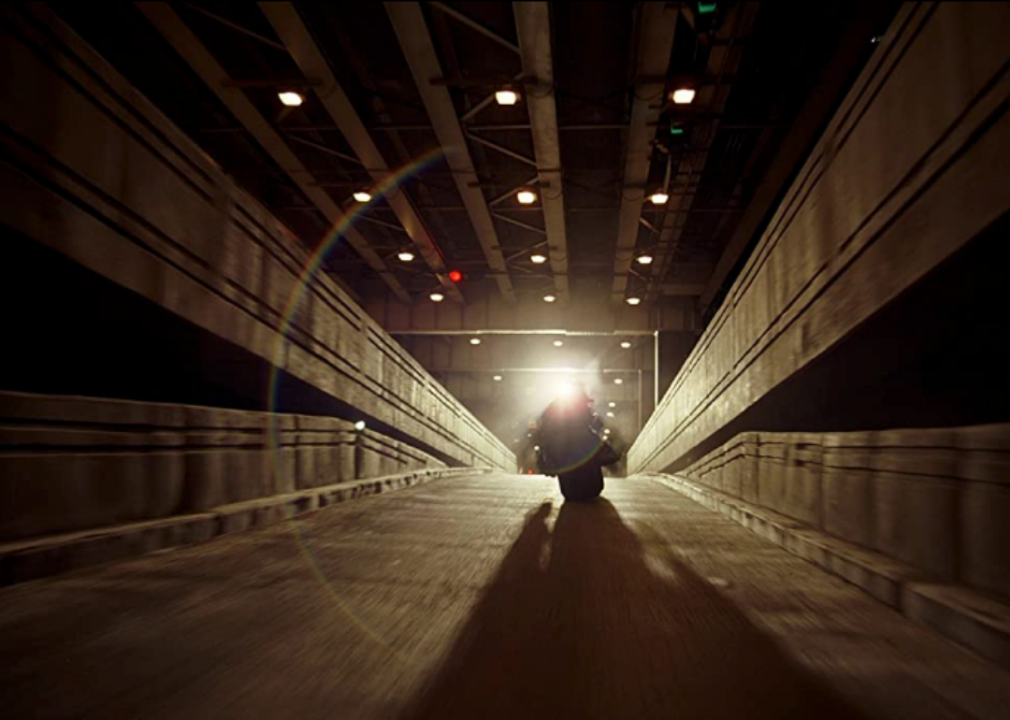 The chase scene tunnel from ‘The Dark Knight’

It’s understood that the fictional city of Gotham from the extensive “Batman” universe is a tribute to New York City – however, that didn’t stop director Christopher Nolan from finding inspiration for his Gotham in Chicago. Nolan’s “The Dark Knight” was a critical success, far surpassing its status as a comic book movie, with famed film critic Roger Ebert calling it a “haunted film” and “engrossing tragedy.”

One of its more haunting moments is the chase scene between Batman, Gotham PD, and the Joker, in which the latter is attempting to murder politician Harvey Dent. This chase was filmed in Chicago’s Lower Wacker Drive, which is famous, or infamous, for its barren concrete construction, allure for drag racing, and being so difficult to navigate that even navigation apps wouldn’t work until around 2018. These elements, in addition to the cinematography of “The Dark Knight,” combine to create one of the most disorienting, creepy, and adrenaline-inducing car chases on screen. 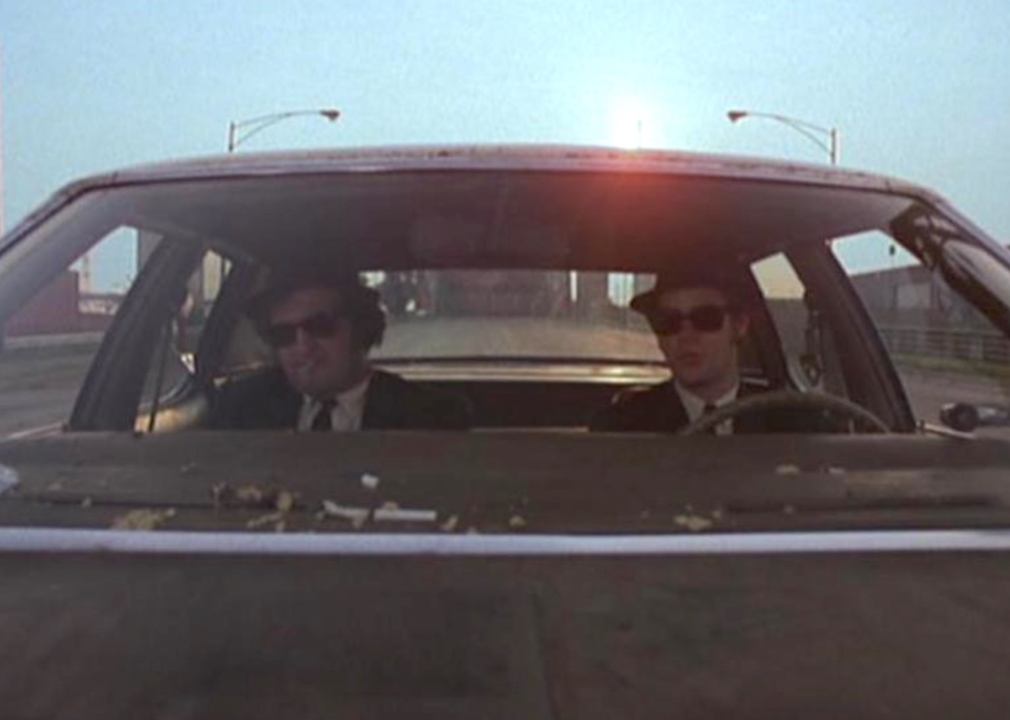 The bridge from the bridge jump in ‘The Blues Brothers’

John Landis’s musical comedy “The Blues Brothers” is #8 in Forbes’ list of films that destroyed the most cars, coming in at a whopping 104 cars wrecked during production (60 of which were cop cars). However, the first major car stunt of the movie does not end in the vehicular wreckage that becomes the norm, even if it realistically should have.

Elwood and Jake Blues, on their way back home after Jake is released from prison, drive their “Bluesmobile” (a repurposed cop car) over Chicago’s 95th Street Bridge. This action does not sound that dramatic until you realize that they used the bridge as a massive ramp while two sections were lifting into the air to allow for a boat to pass underneath in an absurdly large jump. The 1958 bridge is still present today, albeit a different color from its appearance in the film – originally white, it is now the standardized maroon. The 95th Street Bridge is located by the coast of Lake Michigan and Indiana state line, and the restaurant Calumet Fisheries boasts of “hosting the movie crew of The Blues Brothers” due to its location right next to the bridge. 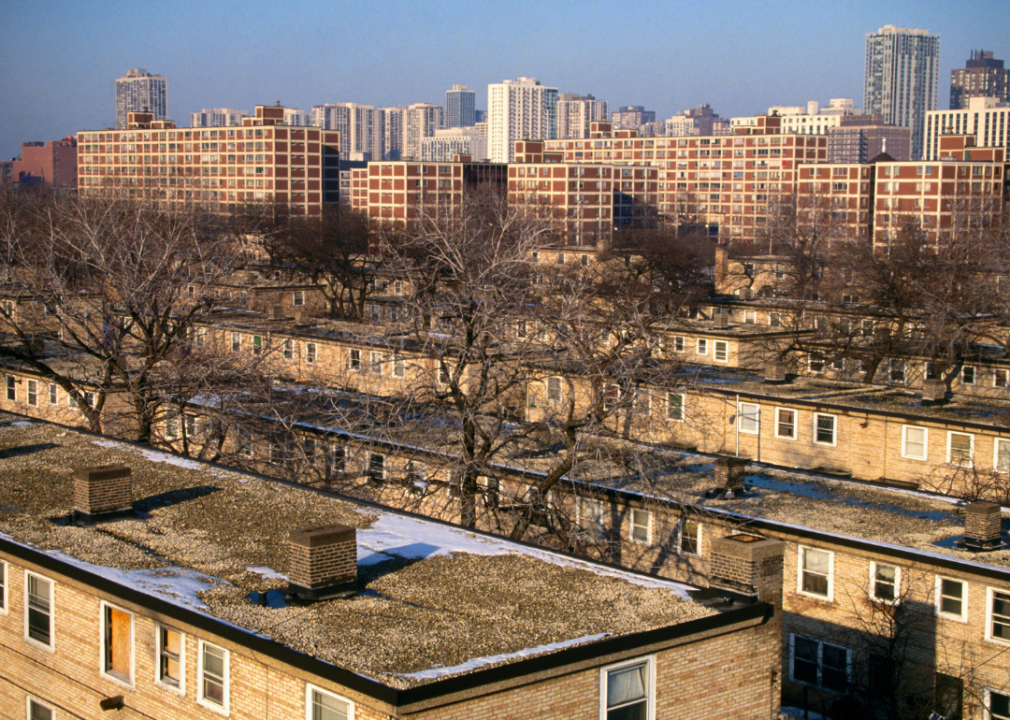 The Cabrini Rowhouses from the ‘Candyman’ films

While “Candyman” is a horror film about the hook-handed ghost of a former slave, the film’s depiction of the Cabrini-Green Projects of Chicago is firmly based in reality. Housing projects were originally created in a federal response to the unethical living conditions of the lower class in major cities, but with time and severe budget cuts, these projects became primarily black and left to their own devices. Cabrini-Green was both a real project located in North Side Chicago and a notorious example of how racism contributed to the downfall of housing projects.

Despite many projects being torn down, the original Rowhouses of Cabrini where “Candyman” was filmed are still standing today – hence the reason why in both the 1992 “Candyman” and 2021 “Candyman” the area is dilapidated, graffiti-covered, and generally considered a bad or unsafe neighborhood. The good news is, a 2013 lawsuit requires the Chicago Housing Authority to renovate and build more affordable housing in the area, even though the renovation seems to be slow-moving. 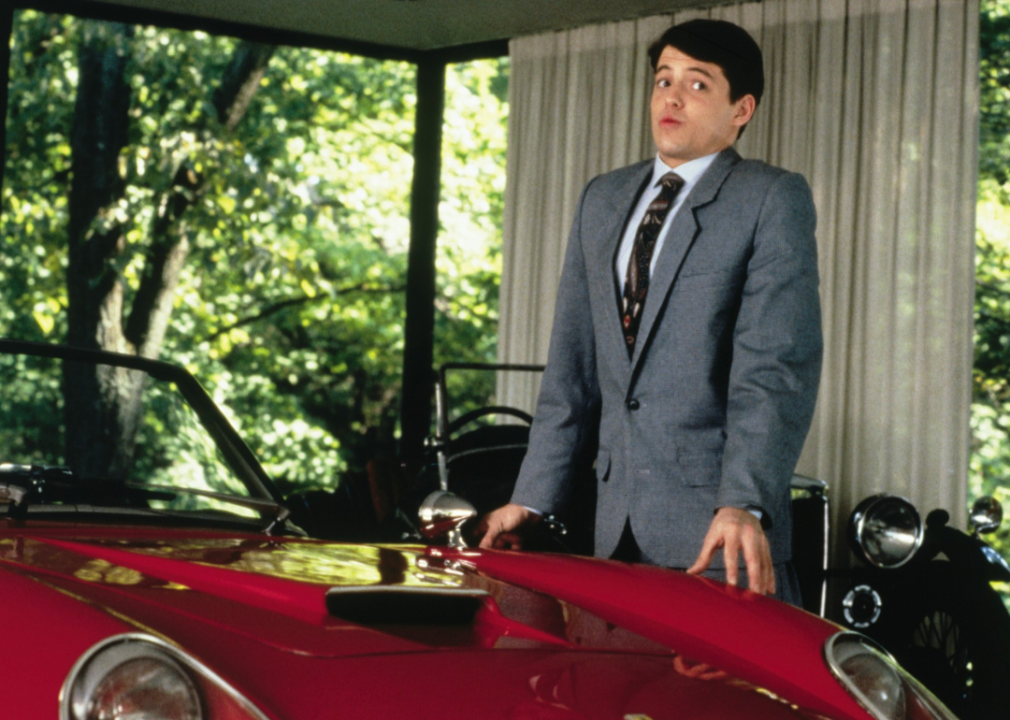 Fans of “Ferris Bueller’s Day Off” might be surprised to know that the iconic house of one Cameron Frye was on the market between 2011-2014 – for the then measly price of around 1.5 million dollars!

Cameron’s house is home to several classic scenes from the film, including the one where fake-sick Ferris bullies real-sick Cameron into his schemes, and the emotional climax of the film in which Cameron has a breakdown and wrecks his father’s beloved classic Ferrari. Despite the home consisting mostly of large window panes and transparency, the house is characterized as a kind of prison for Cameron in the film where he can see everything and yet do nothing. On a practical level, the windows are the result of the mid-century modern style that the entire home is built in, the same style that the 2011 realtor attributed its lack of buyers to. Located in the desirable Chicago suburb of Highland Park, Illinois, Cameron’s house borders Lake Michigan north of downtown Chicago. 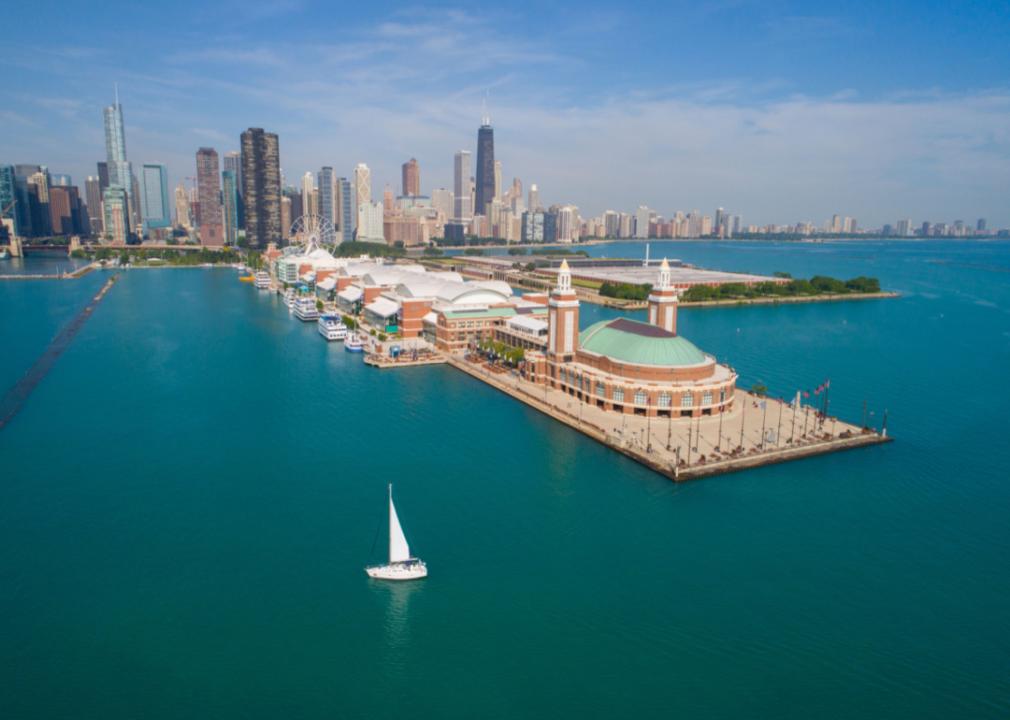 The ‘Atlantic City’ Nine Ball Classic in ‘The Color of Money’

Martin Scorsese’s star-studded film “The Color of Money” is a pool-based sports film following Paul Newman and Tom Cruise as they journey from Chicago to Atlantic City for a tournament. Many locations seen on screen were filmed in Illinois despite the narrative leaving Chicago fairly early on – the climax of the film being no exception.

While the protagonists’ pool competition takes place in the Resorts International Hotel in Atlantic City, the building they filmed said competition in is actually at Navy Pier. Navy Pier is a major cultural center of Chicago, featuring a beer garden, children’s museum, Shakespeare theater, and more. “The Color of Money” used the Pier’s Aon Grand Ballroom, which has existed since the Pier’s inception in 1916 and features an 80-foot-tall arched ceiling and extensive view of Lake Michigan – although, it does look rather different in the film with its windows blocked off and around 30 pool tables covering the floor. 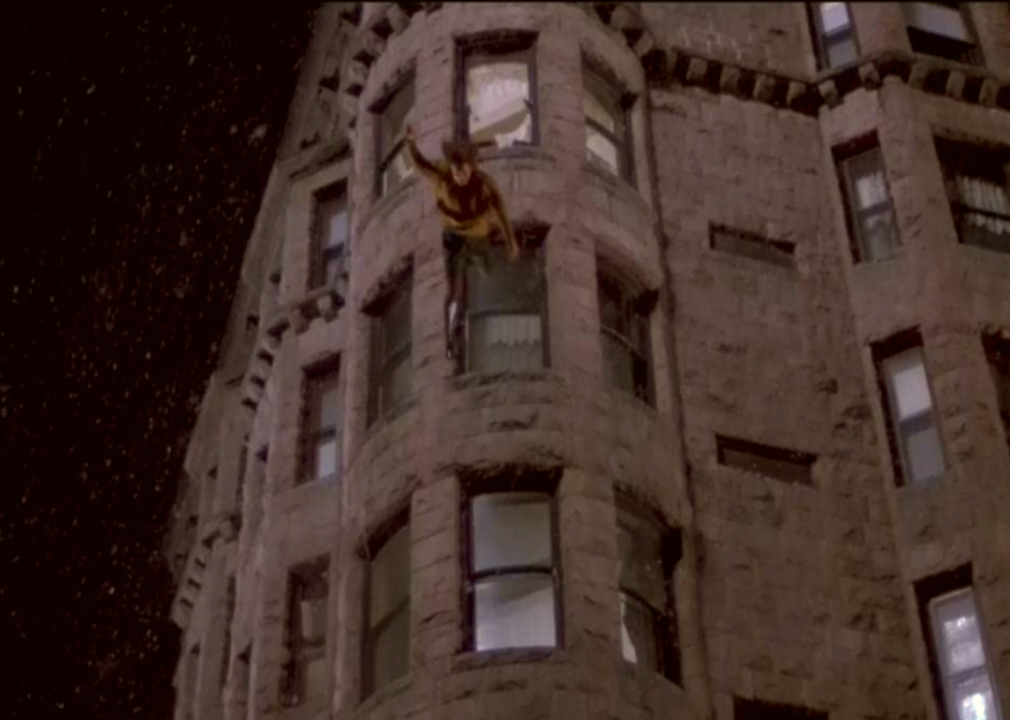 One of the scariest elements of Tom Holland’s “Child’s Play” (no, not that Tom Holland) is the invasion of the domestic space, emphasized by how almost every scene with the haunted Chucky doll takes place in the protagonists’ apartment. With this in mind, there’s no more iconic “Child’s Play” location than the Brewster Apartments in the Lake View neighborhood of Chicago’s North Side.

Chucky is not the only celebrity to reside here, as “Running Scared” with Gregory Hines and Billy Crystal also filmed at the Brewster. The building has its own haunting history outside of the film, as WBEZ Chicago reports that in 1895 a publisher fell off the building’s roof and now haunts the apartments. That gets a little more relevant as a scene in “Child’s Play” has the family’s babysitter fall off the building. 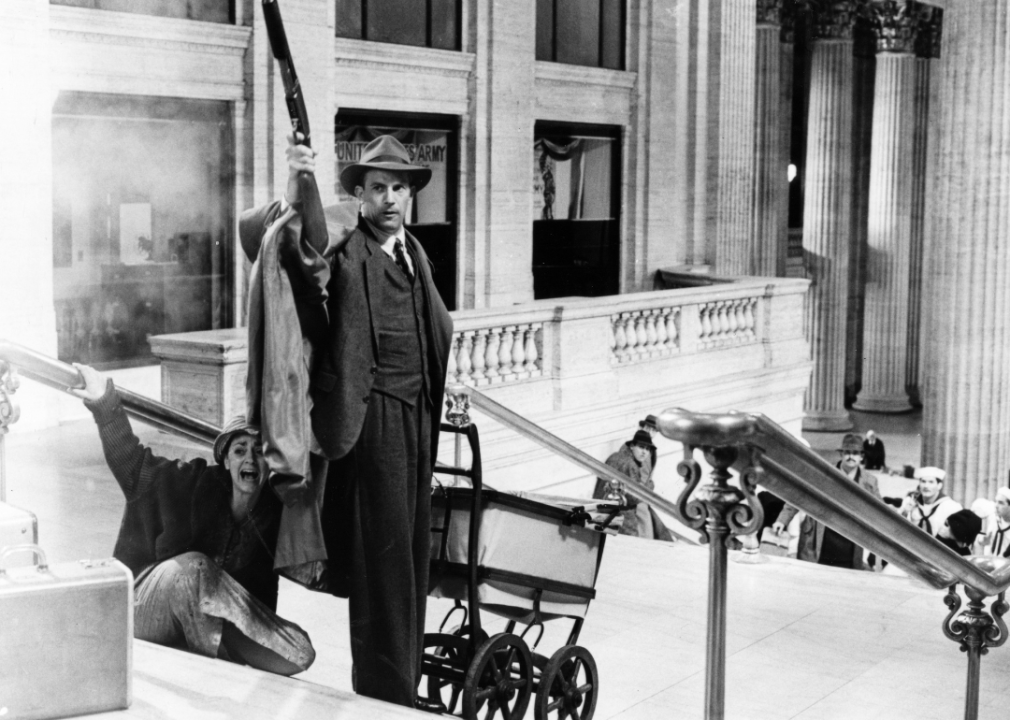 Union Station in ‘The Untouchables’

The use of Union Station in Brian De Palma’s “The Untouchables” has become so iconic that the stairs used in the scene are referred to as the Untouchables’ Stairs. These stairs are the location in which Kevin Costner, playing special agent Eliot Ness, comes face-to-face with the henchmen of Al Capone for an epic shootout.

Union Station is a historical transportation hub built in 1925 in the Beaux-Arts architecture style, and since 2012 has been undergoing a series of renovations meant to benefit its function and aesthetic all the same. Out of all its beautiful locations, De Palma chose to film on the grand staircase that connects visitors from the Canal Street entrance to the Great Hall of the Station, made out of marble and travertine that combine for an ornate background for blood to spill. “The Untouchables” is not the only movie to feature this location, however, as “Public Enemies,” “Road to Perdition,” and “My Best Friend’s Wedding” have all featured this Chicago landmark. 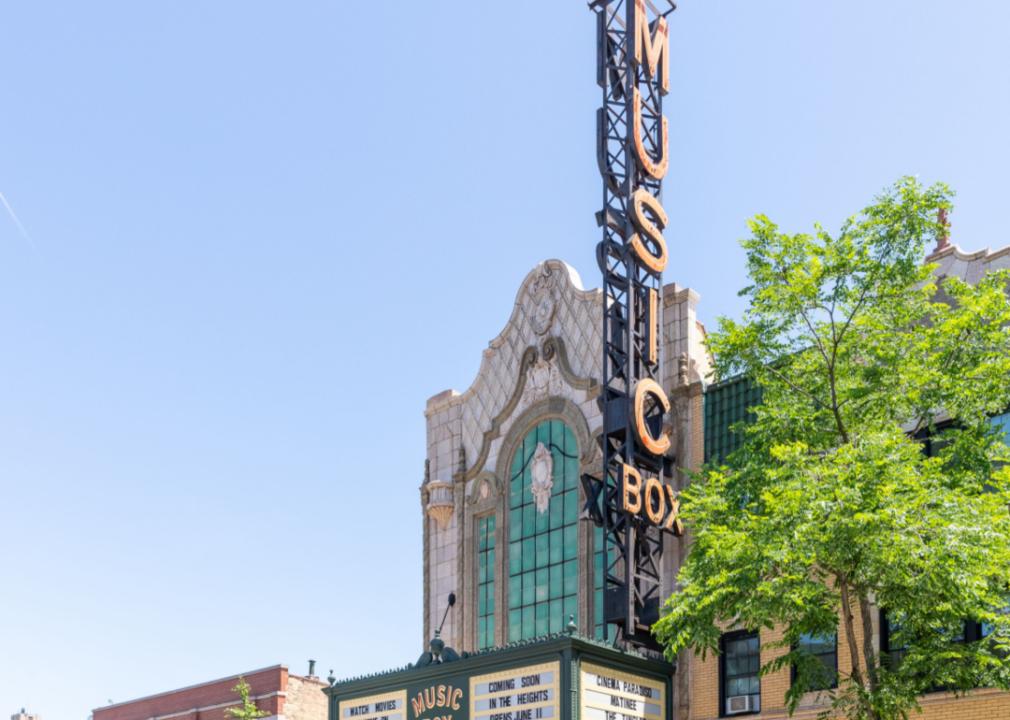 The movie theater from ‘High Fidelity’

Stephen Frear’s “High Fidelity” is an overt homage to music, breakups, and how music gets people through breakups. However, the film also feels like a tribute to its setting, Chicago’s Wicker Park.

Based on the novel of the same name by Nick Hornby in 1995, it might surprise some fans to discover that the original narrative takes place in Hornby’s home of London, England and not Chicago. Despite that fact, the film transitions seamlessly into the trendy neighborhood of Wicker Park, and features many of its locations – most notably, the Music Box Theatre where our protagonist Rob revisits his second ex, a film critic named Penny, to discover what makes women always break up with him.

The Theatre has existed since August 1929, two months before the Great Depression began, and as such maintains the grandiose style of movie theaters that is more akin to today’s opera houses and Broadway theaters. Fitted with a massive neon sign and marquee, the Music Box describes itself as “a symbol of Chicago’s go-to venue for independent, foreign, cult, and classic films,” simultaneously showing high quality reissues of films (including “High Fidelity”) and new releases. 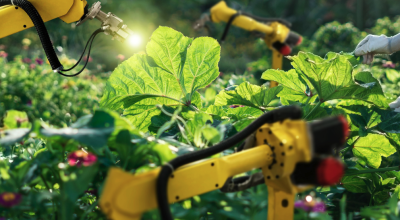