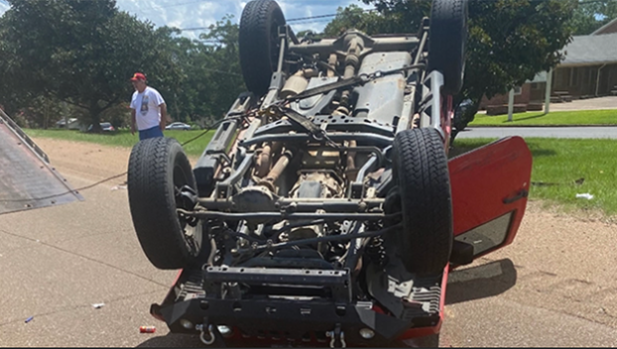 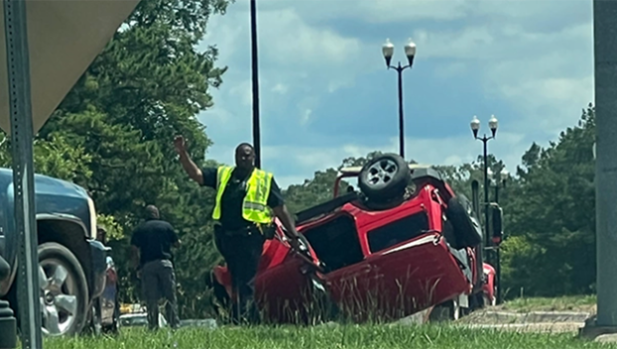 Police commended a group of civilians, including a local doctor, who raced onto the scene of a two-vehicle accident that ended with a car upside down in a busy Mississippi intersection.

Traffic stalled for at least 30 minutes in front of Parkway Baptist Church on U.S. 61 North and Melrose Montebello Parkway due to a two-car accident in which one vehicle was laying upside down near the intersection.

The accident backed up traffic at about 11:35 a.m. all the way from the church to Merit Health Natchez hospital.

Early reports indicate a driver of a gray Honda traveling from the area of the church across the intersection of U.S. 61 on Melrose Montebello Parkway and collided with a northbound red Jeep. The Jeep rolled over during the crash.

The driver of the Jeep was responsive and alert, but because the vehicle had been overturned, was transported to the hospital to be checked out, Natchez Police Chief Joseph Daughtry said.

The driver of the Honda refused medical attention at the scene.

Thomas LeMay, MD, happened to be in the area at the time of the accident and stopped to help until first responders arrived, Daughtry said.

“He rushed out and started assisting,” he said. “We’re grateful to the civilians who stopped to help and to the first responders. When we first got the call, I thought it was going to be a lot worse than what it turned out to be. Thank goodness it wasn’t. Both drivers were wearing seatbelts.”