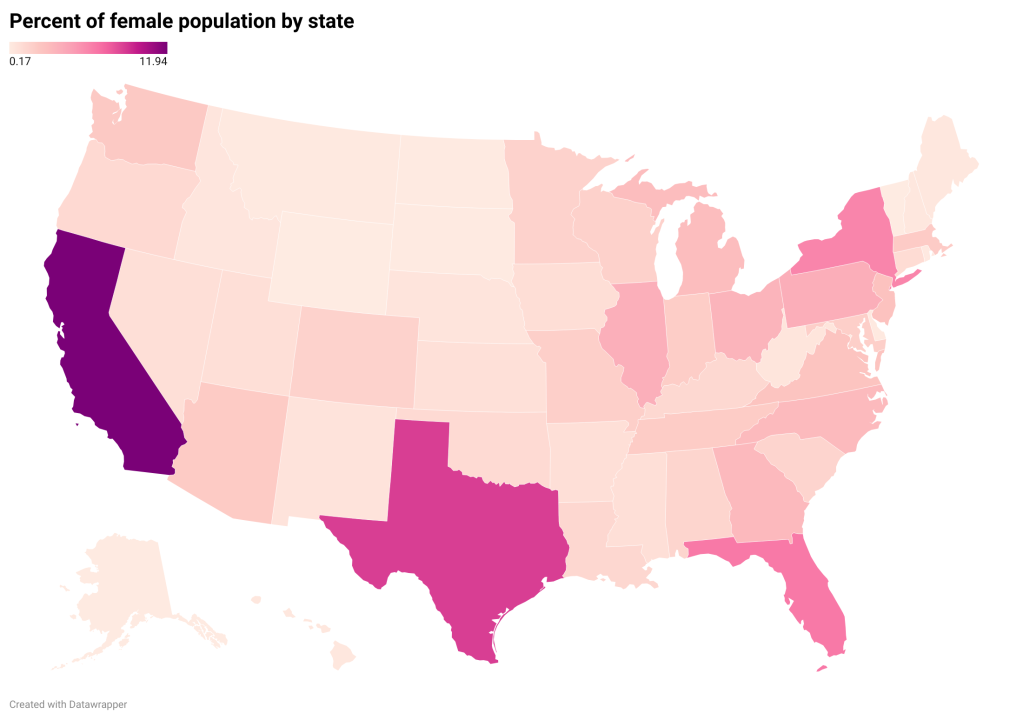 For nearly 50 years, abortions were protected as a constitutional right. In June of this year, the Supreme Court claimed the 1973 decision of Roe v. Wade, the case that established this precedent, was based on a “remarkably loose treatment of the constitutional text,” and as such, overturned the ruling in a 5-4 vote. It is estimated that 36 million people were impacted by the decision as former laws become null and void, and even older laws from before Roe became relevant once again.

Stacker analyzed data from the Guttmacher Institute and the U.S. Census Bureau to investigate the number of women who live in areas where abortion access is already or likely to be restricted in the aftermath of the Roe reversal.

The legality of abortion is now up to individual states, many of which seek to ban it completely. In this new legal landscape, nearly half of all women in the U.S. live in areas where access to safe abortions will likely become more restrictive, if not impossible.

The 1973 court that heard Roe v. Wade ruled that a woman’s right to obtain an abortion was protected by the Due Process Clause of the Fourteenth Amendment and its implied right to privacy. While the right to privacy—meaning the right to be free from government intrusion in this context—is not explicitly mentioned anywhere in the Constitution, it exists under the penumbra and is considered a fundamental right. This room for interpretation, no matter how small, is often what makes privacy issues within a constitutional framework so controversial.

Although the court upheld a woman’s right to obtain an abortion, it did not do so absolutely. States were permitted to regulate abortions after the point of fetal viability—when a fetus can survive outside of the womb—except in cases when pregnancy threatened the health or life of the mother.

Most experts agree fetal viability happens around 24 weeks, but can really only be determined on a case-by-case basis. The inability to standardize fetal viability as a gestational demarcation opened the doors for states to set their own guidelines, as with Texas’ and South Carolina’s heartbeat bill and Mississippi’s gestational age act. Fetal viability was at the center of Dobbs v. Jackson Women’s Health Organization—the case out of Mississippi that catalyzed the June 2022 reversal of Roe.

You may also like: How America has changed since the first Census in 1790 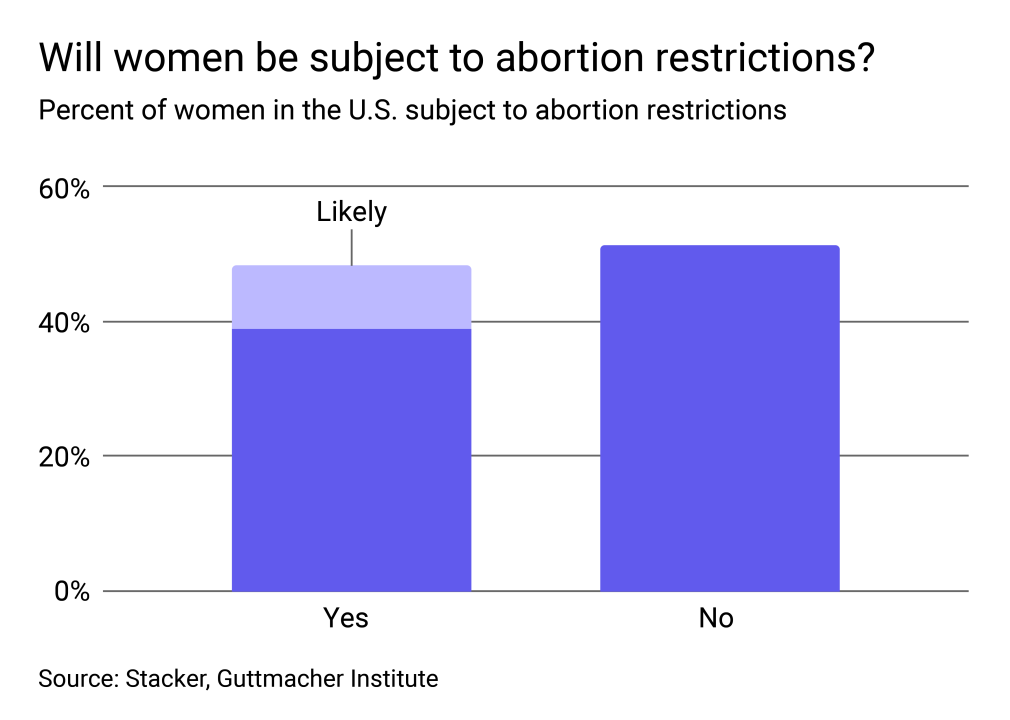 Currently, 22 states either have abortion restrictions or are likely to pass them in the coming months. In the remaining 28 states and Washington D.C., abortion is still legal. Sixteen predominantly Democratic states with a legacy of abortion advocacy have moved to enshrine abortion protection in state legislation not just for residents, but for out-of-state patients seeking care.

For women in states where these restrictions already or imminently will exist, accessing a safe abortion could require long waits, days of costly travel, end even prosecution, according to the Guttmacher Institute.

Women who travel out of state to receive an abortion, as well as the physicians who perform them, even in safe-haven states, may be at risk of prosecution based on the restrictive laws of their neighbors. Both Texas and Oklahoma, for example, have laws that allow private citizens to sue people who perform abortions or who otherwise help someone access one. 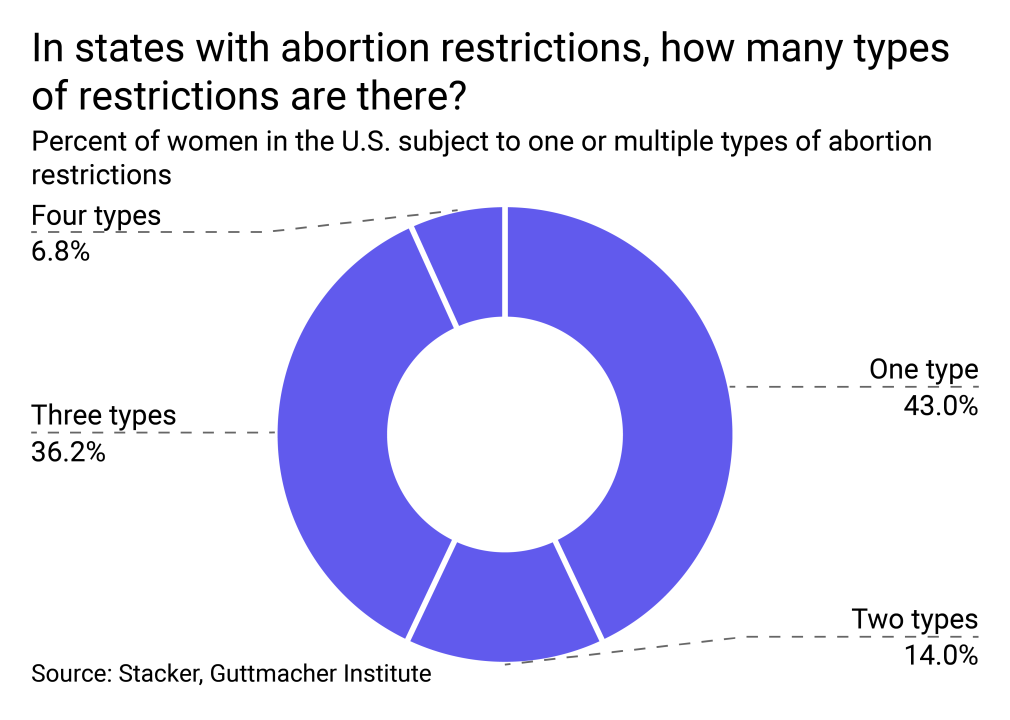 Louisiana and Oklahoma are the most restrictive states, with four different abortion restrictions on the books including trigger bans, six-week bans, pre-Roe bans, and constitutional prohibitions on protection.

Despite some states having more than one restriction in place, it is typically just one that takes precedence over the others. But in certain cases, these restrictions work in tandem. For example, states with constitutional amendments declaring they are not obligated to protect a right to abortion may also enact abortion bans at six weeks or may reinstate restrictive laws that were in effect prior to 1973, when Roe made them null and void. 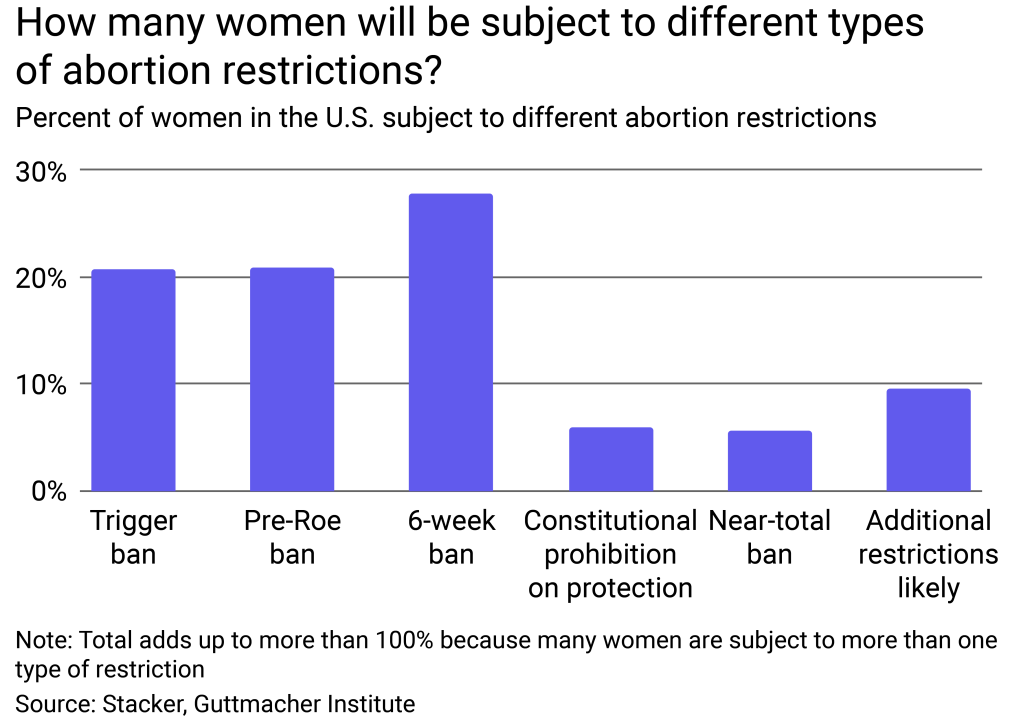 The overturning of Roe was the “trigger” in 13 states that have already made way for, or will soon lead to, specific abortion restrictions, such as six-week bans or near-total bans like those being pursued in Louisiana, Oklahoma, and Utah. Near-total bans, the most restrictive of all, outlaw abortion in all instances, with few extreme medical exceptions.

Immediately after the Supreme Court’s decisions, trigger bans were enacted in Arkansas, Missouri, South Dakota, Wisconsin, and Mississippi. In other states, trigger bans will not take effect until some type of additional legislative action happens.

Abortion is still legal in Florida, Indiana, Montana, and Nebraska, but all four states have Republican governors who have expressed interest in restricting abortion access. These states make up the nearly 10% of women represented in the above visualizations where additional restrictions are likely.