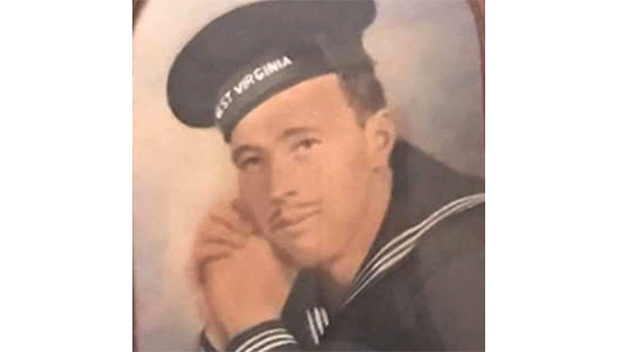 Eighty-two years ago, on May 14, 1940, a 22-year-old young man from Liberty took the oath of enlistment in United States Navy in New Orleans.

John Russell Melton went through Navy boot camp and training. A handsome sailor with a thin moustache, Melton was assigned to the USS West Virginia. He was a Seaman Apprentice and Seaman Second Class. He learned the skills of signaling, tying knots, naval drills and more.

Little is known now of Seaman Melton’s letters home, or his life on board. But on Dec. 7, 1941, when the Japanese attacked Pearl Harbor, the USS West Virginia was hit by at least seven torpedoes and two armor-piercing shells, causing extensive damage, according to the Department of the Navy. Seaman Melton was aboard during the attack. Explosions ripped through the ship, causing it to sink to the bottom of Pearl Harbor with its crew and Seaman Melton aboard.

Some of the crew of the West Virginia, dubbed the “Wee Vee” survived, but not Seaman Melton, who was one of the 105 men killed in the attack, according to Navy records.

Seaman Melton’s remains, like many of the victims’ remains, were brought up with the West Virginia, but then were unable to be identified, according to the Department of the Navy. Those remains were interred at the National Memorial Cemetery of the Pacific in Hawaii, then later sent to government laboratories for identification.

In 2017 the Department of the Navy began a project to identify the remains of those lost in the USS West Virginia, according to Capt. Robert McMahon, Director, Navy Casualty Office. In June 2022, Seaman Melton’s remains were identified, McMahon said.

The family in Liberty was notified and asked about arrangements for a final resting place for Seaman Melton. Sadly, his parents had died, as well as nearly all his living relatives, except for his niece.

“The family is overjoyed with the prospect of Uncle Russell finally coming home to be placed by his parents in his final resting place in the Mt. Pleasant Baptist Church cemetery, said Patsy J. Brown, Seaman Nelson’s niece.

“Learning of Uncle Russell’s death was doubly hard on my mother because I had a twin sister who succumbed to an infant breathing disorder at the same time.  We were only 10 months old,” Brown said.

“The family is saddened by the fact that all of his siblings are deceased and they won’t be able to participate in this remarkable event. However, as one of the older nieces, I feel blessed to be part of this historical event. The family is coming together and we are so grateful, I have been in contact with cousins, and it’s been years since we last communicated. It makes you want to stop and smell the roses.”

After extensive repairs, the USS West Virginia was put back in service and was credited with significant contributions to the Allied victory.

The funeral service will be Saturday, July 9, at 10 a.m. with full military honors at Mt. Pleasant Baptist Church, 3005 Mt. Pleasant Road, Gloster.. There will be no visitation.

Church services and military burial will be across the street in the church cemetery near his parents, John Henry Melton and Mattie Bell Williams Melton, both of whom passed away before knowing the resolution of their son.