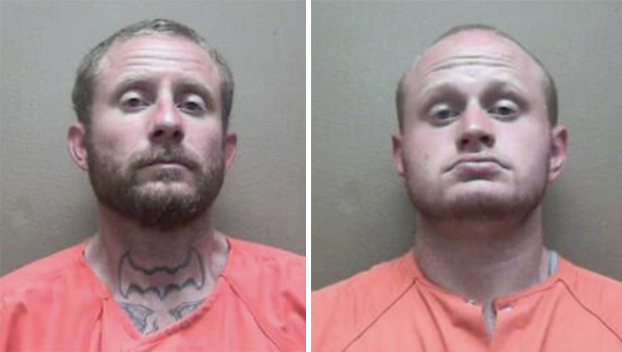 A traffic stop on Monday led to the confiscation of drugs and drug paraphernalia and the arrest of two men, each with outstanding arrest warrants.

Kennon gave the deputies permission to search his vehicle, according to a press release issued Wednesday morning from Adams County Sheriff Travis Patten.

Inside a backpack in the vehicle, deputies found 13 grams of methamphetamine and drug paraphernalia.

A passenger in the vehicle, Johnny Stevens, claimed ownership of the backpack and its contents.

Deputies also found several used syringes in the vehicle, which Kennon claimed as his, according to the press release.

Deputies discovered Stevens had active arrest warrants with the Natchez Police Department for forgery and with the Concordia Parish Sheriff’s Office for probation violation.

Kennon also had a warrant for his arrest for probation violation from the Concordia Parish Sheriff’s Office.

Both were arrested and taken to the Adams County Jail.

Kennon was charged with possession of drug paraphernalia.

Both are being held at the jail because of their active warrants with other departments.