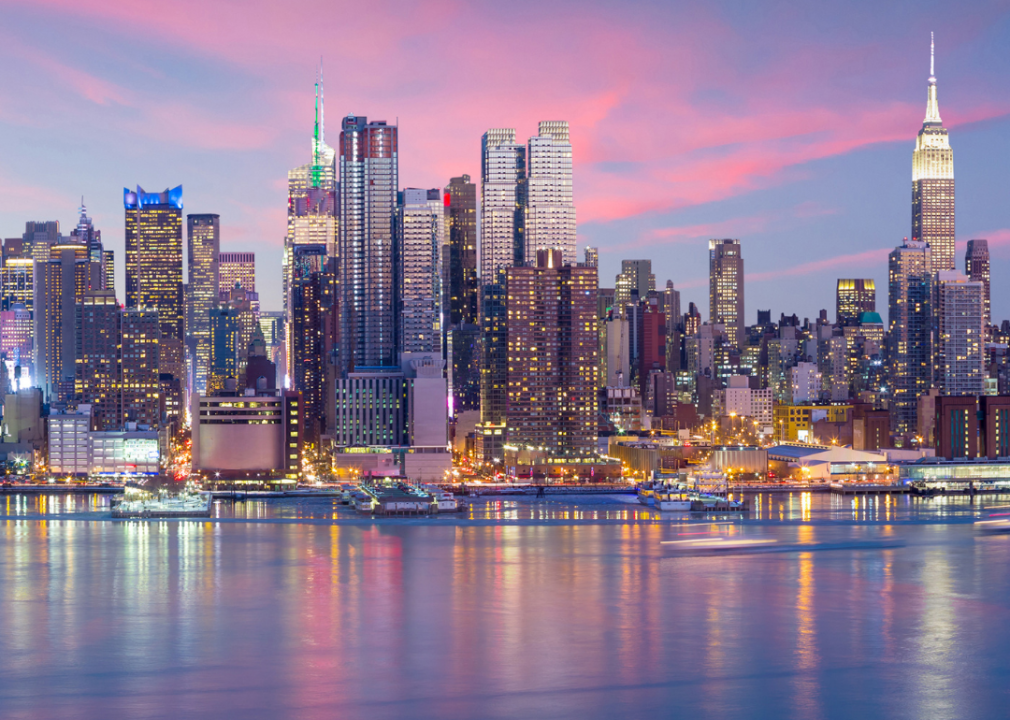 Few cities are as instantly recognizable on film as New York. Its dazzling skyscrapers, bustling avenues, classic brownstones, and distinctive bridges have been shot in every way conceivable. From the aerial swinging of Peter Parker in the “Spider-Man” franchise and Santa’s careening sleigh in “Elf” to the inside the Museum of Natural History in “Night at the Museum” and the halls of Grand Central Station in “Men in Black.”

Filmmakers have been drawn to New York City for as long as movies have existed. The first film shot on location in the city is thought to be 1896’s “Herald Square,” a plotless micro-documentary known as an “actuality,” a format common in the earliest days of movie-making. And in 1901, “What Happened on Twenty-third Street, New York City,” one of the first narrative micro-films shot in New York, showed a woman’s skirt being blown upward by a sidewalk vent—a scene which would be recreated by Marilyn Monroe in 1955’s “The Seven Year Itch.”

Today, it is not uncommon to walk down a New York street and see a film or television production in progress. As of June 2022, more than 25 television shows have been filmed in the city, as well as five feature films. The city is also home to the most popular filming location in the world: Central Park, which has made a cameo appearance in 352 movies.

From mid-century classics like “On the Town” to more contemporary favorites like “Do the Right Thing,” Giggster researched New York City filming locations and highlighted 10 spots across the city from famous films—complete with addresses—that you can visit on a cinematic expedition. 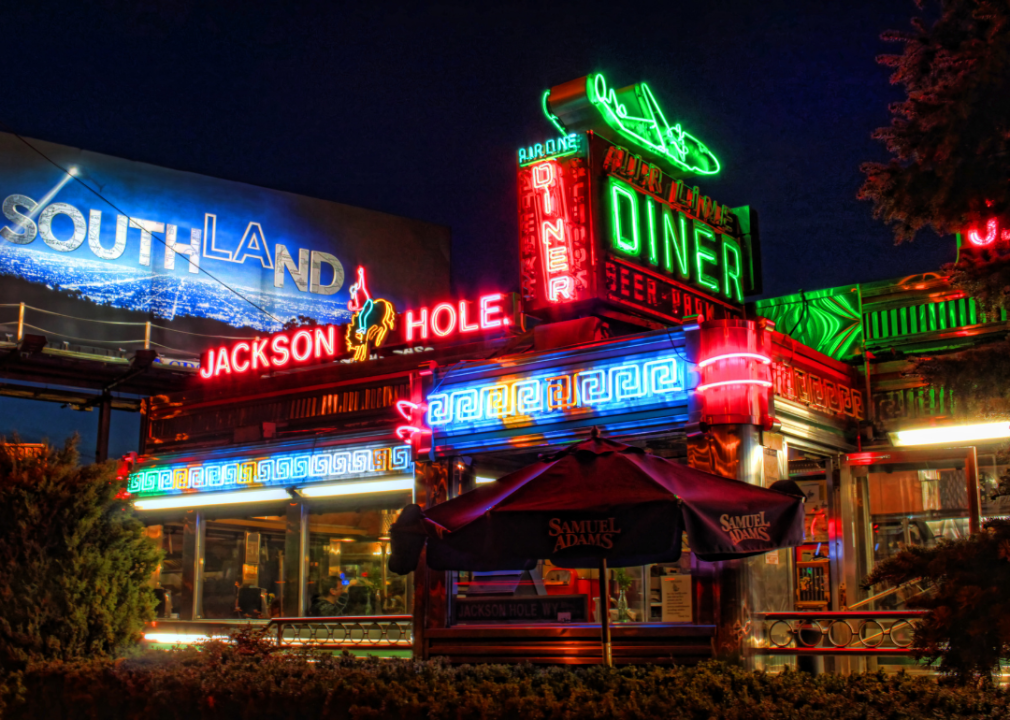 The diner where Henry and Tommy steal a truck in ‘Goodfellas’

Located in Astoria Heights, the Airline Diner served as the backdrop for Henry and Tommy’s truck theft. In “Goodfellas,” the diner is positioned close to Idlewild Airport (now John F. Kennedy International Airport), and the duo waits there, watching for truck shipments going in and out of the airport to pass through. Wearing suits and smoking cigarettes, the two lean against a car with the colorful lights of the diner and a bleak gray sky behind them. As an unsuspecting truck driver pulls into the lot and goes into the diner for some food, Henry and Tommy casually get into the truck and take off, leaving behind the irate driver.

The real diner is about five minutes from Queens’ LaGuardia Airport and is now the location of a small burger chain called Jackson Hole, but the diner’s original retro design and neon Airline Diner sign has been retained. The diner still sees a steady stream of “Goodfellas” fans who come from all over to experience where the movie was filmed, particularly after the death of Ray Liotta in May 2022. 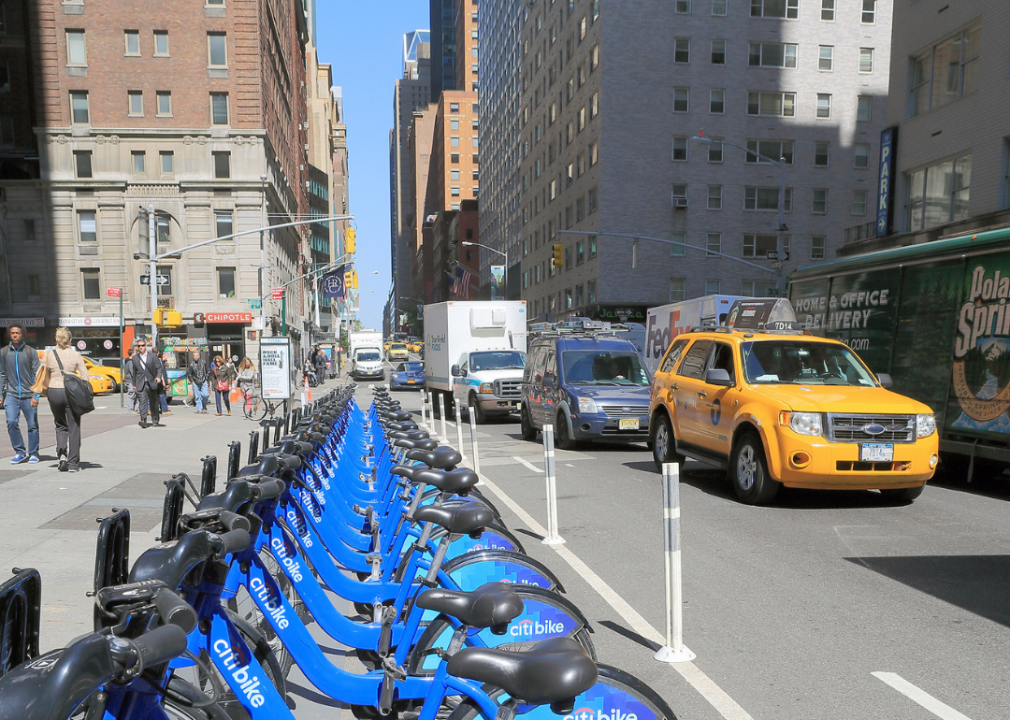 The legendary crosswalk from “Midnight Cowboy” can be found only blocks away from the bottom of Central Park, the Museum of Modern Art, and Radio City Music Hall. The iconic scene follows Ratso Rizzo (Dustin Hoffman) and Joe Buck (Jon Voight) as they walk together down the crowded, ritzy avenue and into the intersection, where a taxi nearly hits them. In what co-star Voight called an unscripted moment, Hoffman angrily pounds on the hood of the cab while screaming, “I’m walkin’ here!” This scene has become one of the most imitated in film and television history.

In an interview, Hoffman explained that the film’s small budget meant there wasn’t enough money to block off the street and hire extras. Instead, he and Voight walked down the pedestrian-filled street, wearing radio mics and using a hidden camera, trying to line up the timing of their dialogue with the changing traffic signals. According to Hoffman, the taxi ran a light and did, in fact, almost run into them, prompting an ad-libbed (but very earnest) reaction. 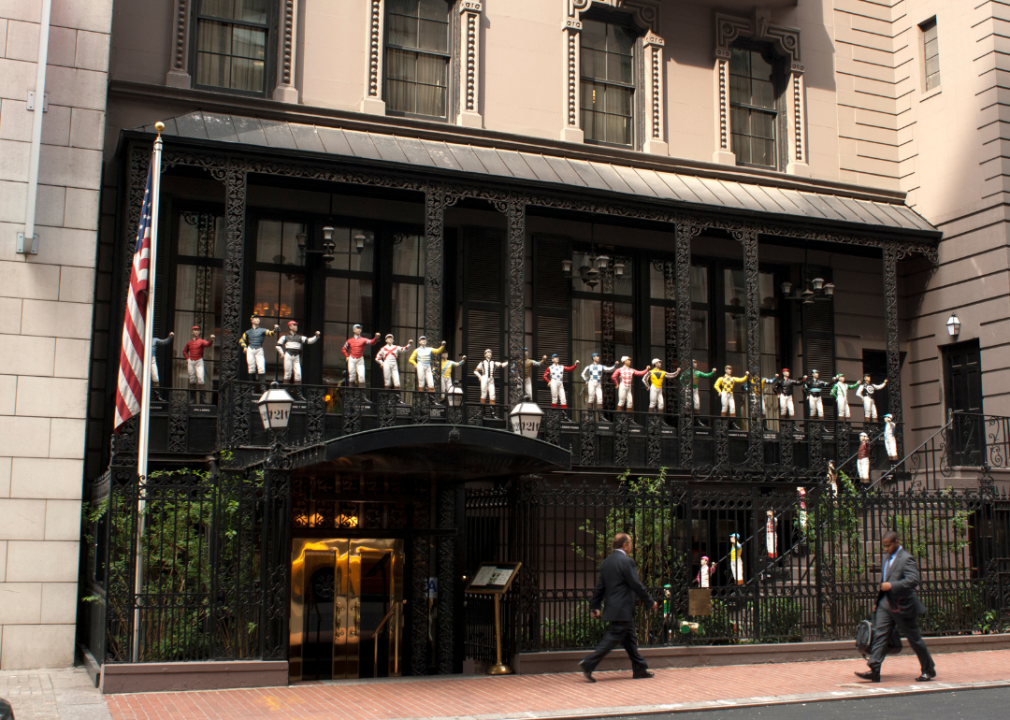 ‘Wall Street,’ ‘Manhattan Murder Mystery,’ and more at the 21 Club

The 21 Club opened in 1930 as a speakeasy during Prohibition. Located around the corner from Rockefeller Center and Radio City Music Hall, the restaurant has long been a symbol of old New York glamour and upper-class exclusivity, both in real life and on screen.

The exclusive restaurant was also featured in the 1993 Woody Allen film “Manhattan Murder Mystery,” when Larry (Allen) and Carol (Diane Keaton) visit the 21 Club with their son on his birthday. The establishing shot of the Club features its famous outdoor wrought-iron railing, which is studded with colorfully dressed jockey figurines. In the lounge, they run into Marcia (Anjelica Huston), who stands in front of a large horse statue. The 21 Club, which officially closed in 2021, can also be spotted in “All About Eve” and “Sex and the City,” and while it doesn’t physically appear in Alfred Hitchcock’s “Rear Window,” Grace Kelly orders up a romantic dinner from the famed restaurant for her inamorata, played by Jimmy Stewart. 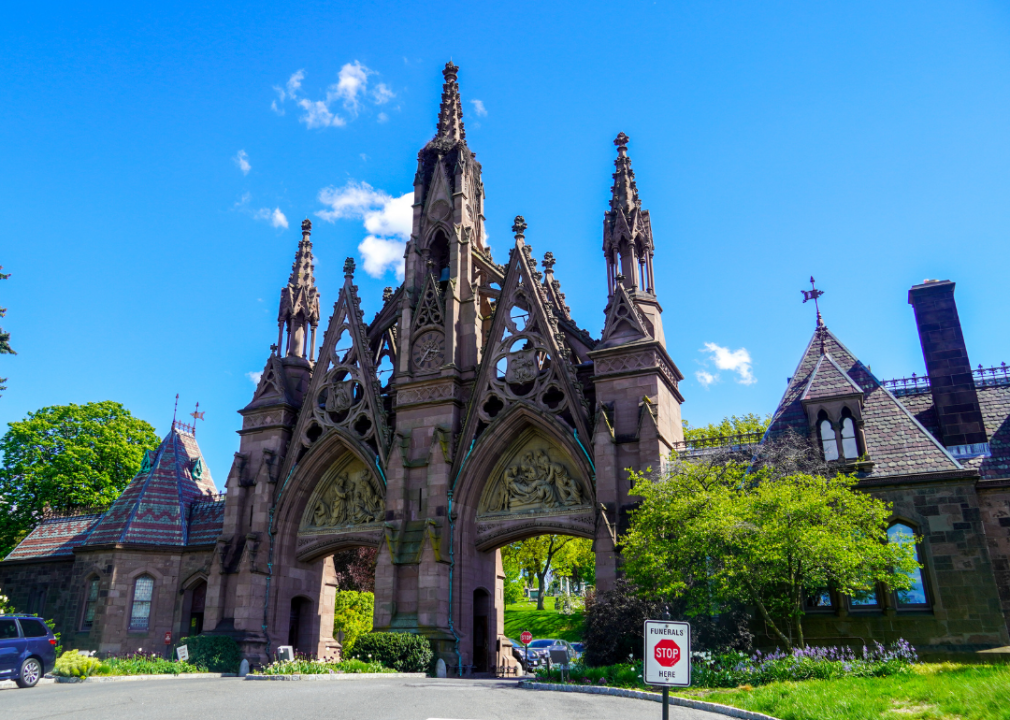 The street outside the bank in ‘Dog Day Afternoon’

The First Brooklyn Savings Bank is a fictional bank that serves as the main setting for Sidney Lumet’s “Dog Day Afternoon.” However, based on true events, the bank was built to closely resemble the branch of Chase Manhattan in Brooklyn’s Gravesend neighborhood, which was actually robbed in August 1972.

To avoid discontinuities between shots of entering the building from the outside, the film crew transformed an empty warehouse into a bank between Prospect Park and Green-Wood Cemetery. The warehouse-turned-film set no longer exists, but an aptly-named hot dog shop called “Dog Day Afternoon” half a block away commemorates the film set’s close proximity. The barbershop across the street from the bank where the police set up headquarters in the film is still a hair salon. 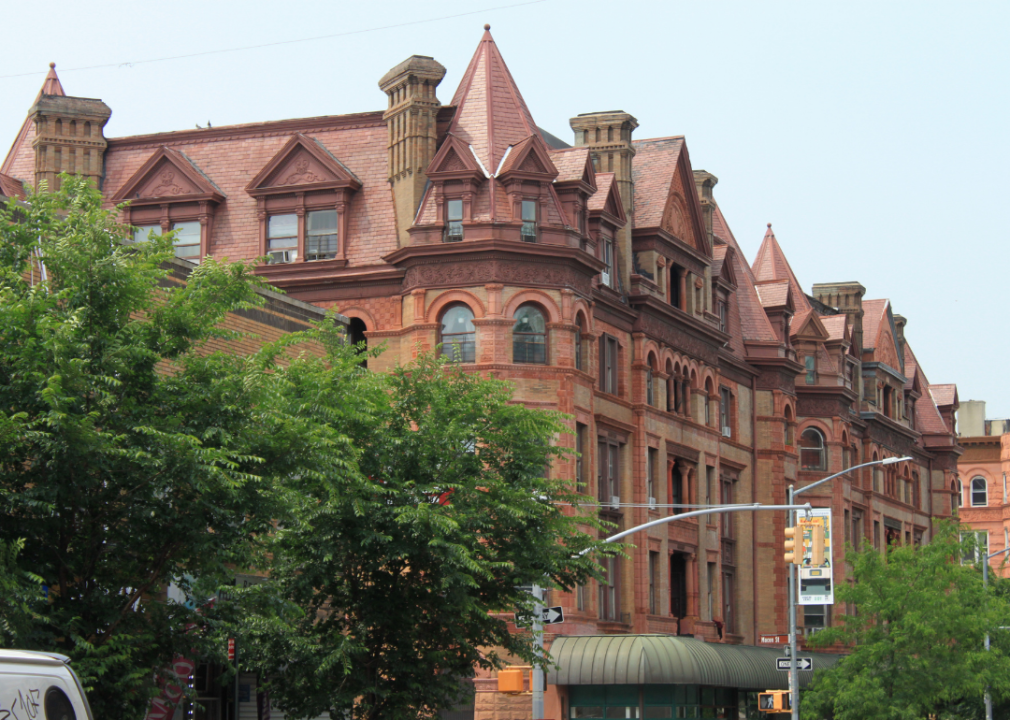 Mookie’s Bed-Stuy brownstone in ‘Do the Right Thing’

Filmed almost entirely on a single block in the Bedford-Stuyvesant neighborhood in Brooklyn, Spike Lee’s “Do the Right Thing” has since been immortalized through the renaming of that block: Do The Right Thing Way. Mookie and Jade’s brownstone still exists at 173 Stuyvesant Avenue, but both Sal’s Famous Pizzeria and the Korean grocery store were constructed sets on small empty lots on the corner of Stuyvesant and Lexington Avenues and were torn down after filming was finished.

Additionally, the Yes Jesus Last Baptist Church was created by adding a fake front to an apartment building. The production and costume design of the film is known for its warm colors, which contribute to the overwhelming sense of building heat and, eventually, fire, which drives the film. 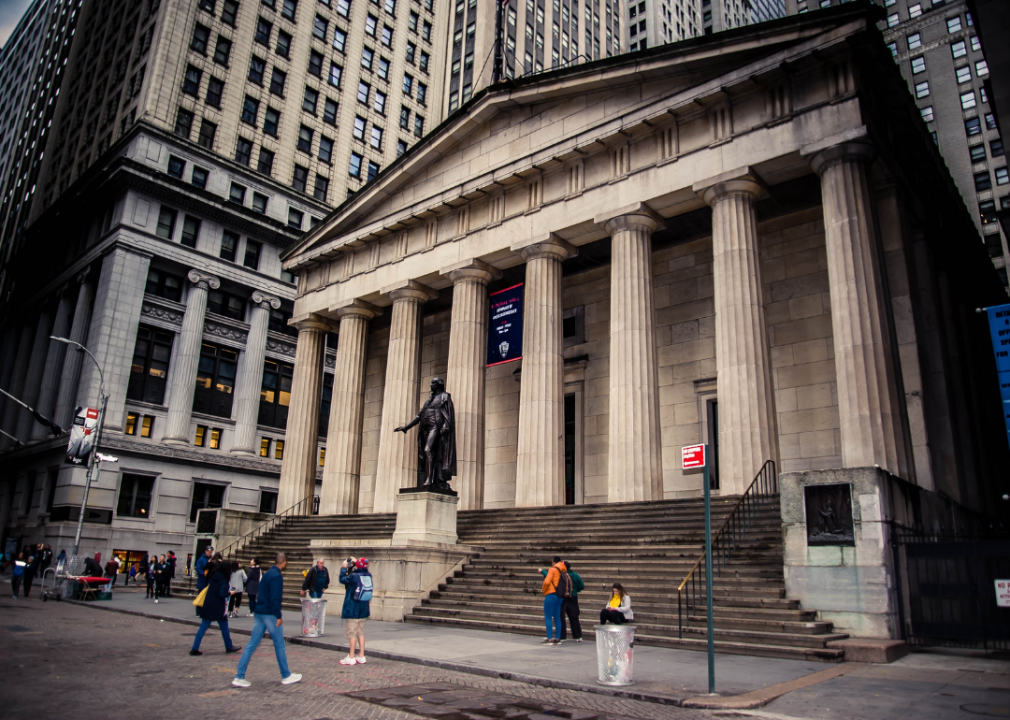 Federal Hall in ‘On the Town’

Although the musical “On the Town” takes place over 24 hours in New York City, only about seven minutes of the movie were actually filmed there. The majority of the scenes filmed on location unfold in the first five minutes of the film, during the opening number, “New York, New York.” The scene features Frank Sinatra, Gene Kelly, and Jules Munshin visiting an array of iconic New York landmarks, including Federal Hall, as well as Brooklyn Bridge, and the Statue of Liberty.

Located in the financial district, Federal Hall’s front steps, imposing columns, and bronze statue of George Washington have been featured in many other films—including “Ghost,” “Wall Street,” and “Kramer vs. Kramer”—as a visual marker of New York’s Wall Street. 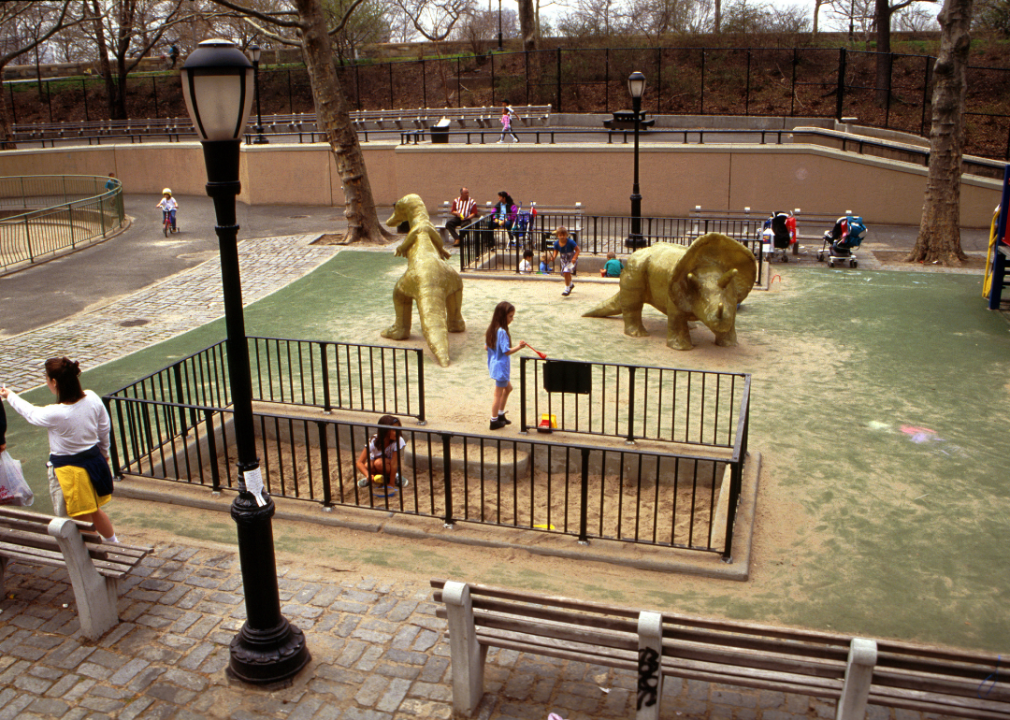 The conclave for the big meeting in ‘The Warriors’

The opening gangs’ evening conclave in the cult film “The Warriors” is supposed to take place in Van Cortlandt Park in the northern Bronx, but was actually filmed at the dinosaur playground in Manhattan’s Riverside Park. Although the playground is home to two large fiberglass dinosaurs—a triceratops and a hadrosaur—they are not visible in the scene, which takes place in the oval-shaped, fenced area of the park.

Stone archways form the backdrop for the hundreds of gang members who gather there just before the police arrive and violence erupts. The scene is dimly lit with flaming torches and streetlights, and Cyrus (Roger Hill), the leader of the most powerful gang, addresses the crowd from a raised platform. 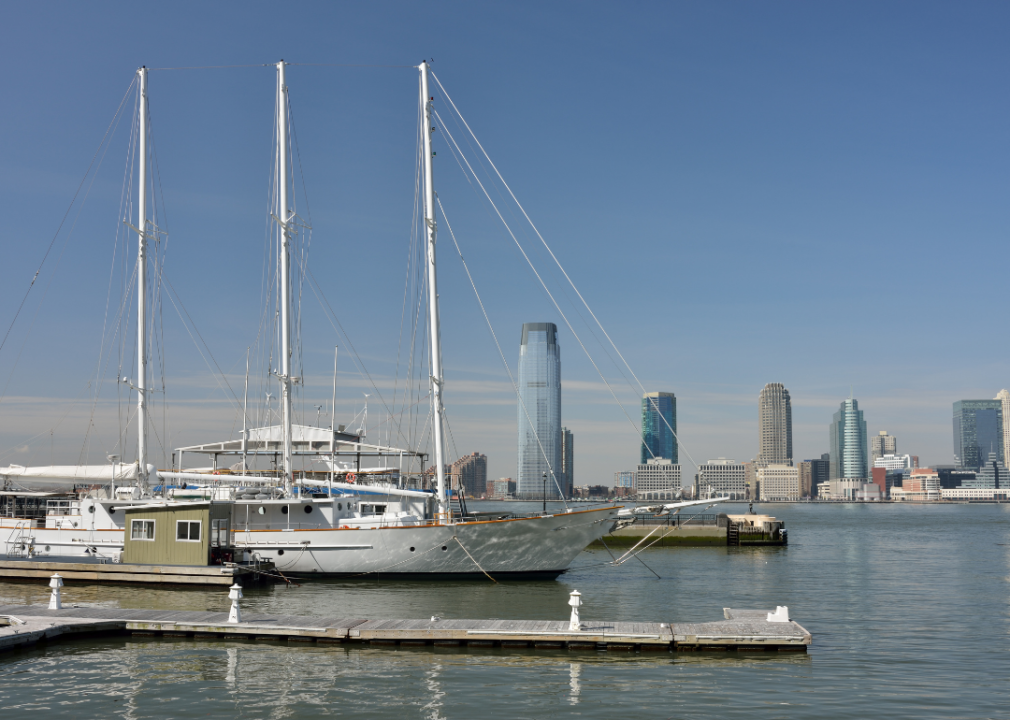 The yacht harbor from ‘The Wolf of Wall Street’

The iconic FBI interrogation scene on Jordan Belfort’s (Leonardo DiCaprio) yacht was filmed in New York’s North Cove Marina, located on the southern tip of Manhattan near Rockefeller Park. The flashy, reflective windows of Tribeca and financial district skyscrapers frame DiCaprio as he stands on his over-the-top boat and greets the federal agents with a glass of wine in hand. From other angles, other yachts and the harbor can be seen in the background. The yacht itself is outfitted with a top-deck landing pad and helicopter and was inspired by the real Jordan Belfort’s yacht “Nadine,” which was originally owned by Coco Chanel. 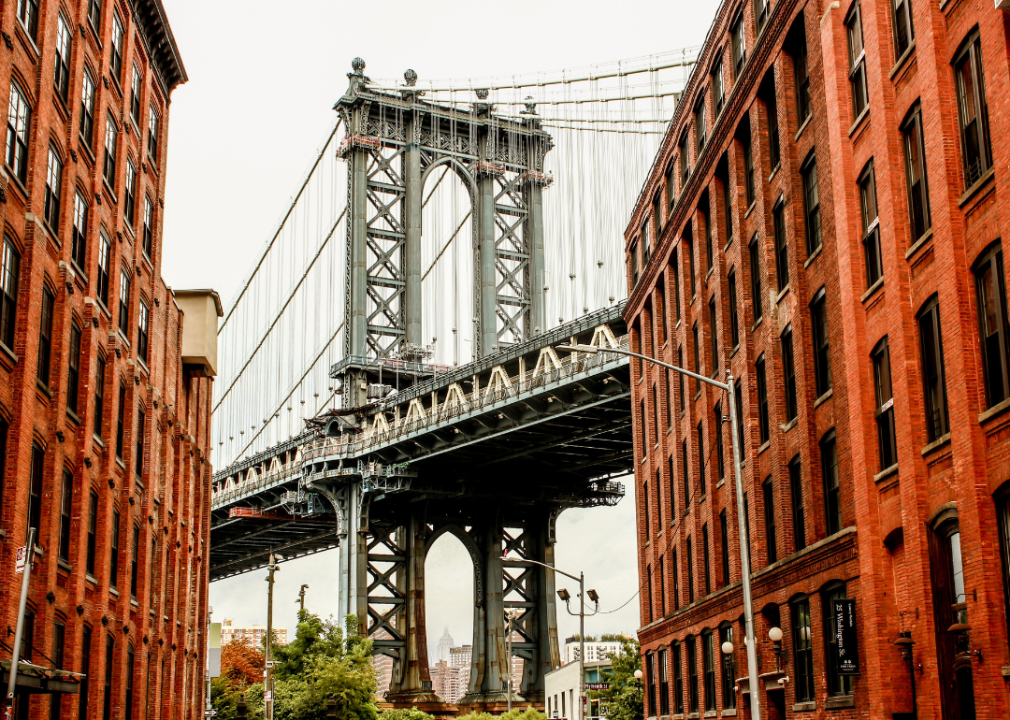 The glimpse of the Manhattan Bridge caught between warehouse buildings in Brooklyn’s Dumbo was so emblematic of “Once Upon a Time in America” that it was used for the film’s promotional poster and DVD cover. The bridge is featured in the iconic scene in which Noodles (Robert De Niro) and his friends, young Jewish gangsters, are ambushed by a rival, Bugsy (James Russo).

As the gang hurries down the street and rounds the corner, the bridge comes into full view against a bleak, foggy gray sky, and police on horseback trot by. Tragedy unfolds only seconds later when the youngest gang member, Dominic (Noah Moazezi), runs into the Dumbo Archway only to find Bugsy there.

Today, the architecture of the neighborhood remains nearly the same. The Archway, which has not changed much aesthetically, now houses part of the Brooklyn Flea Market, while the warehouses now mostly house office spaces. 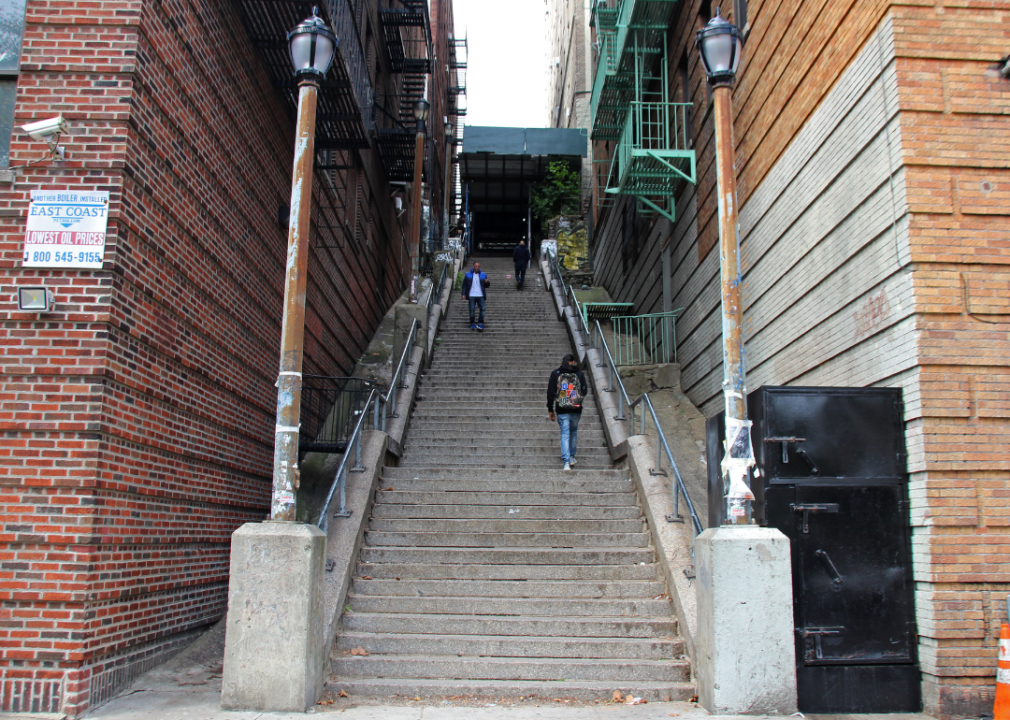 Located in Highbridge in the Bronx, the Shakespeare Steps, now colloquially referred to as the “Joker Stairs,” connect two avenues. At a turning point in the 2019 film “Joker,” Joaquin Phoenix’s Arthur Fleck dances chaotically down the stairs wearing a bright red suit and clown makeup, representing his descent into madness. The steps in the film are grungy and dilapidated, contrasting with Fleck’s colorful suit.

Since the film’s release, the “Joker Stairs” have become such a popular tourist destination that residents of Highbridge have complained that their lives have been disrupted by visitors coming to the steps just for photo ops. Tensions between tourists and residents became so heated that U.S. Rep. Alexandria Ocasio-Cortez issued a statement asking tourists to respect residents of the neighborhood by steering clear of the stairs.