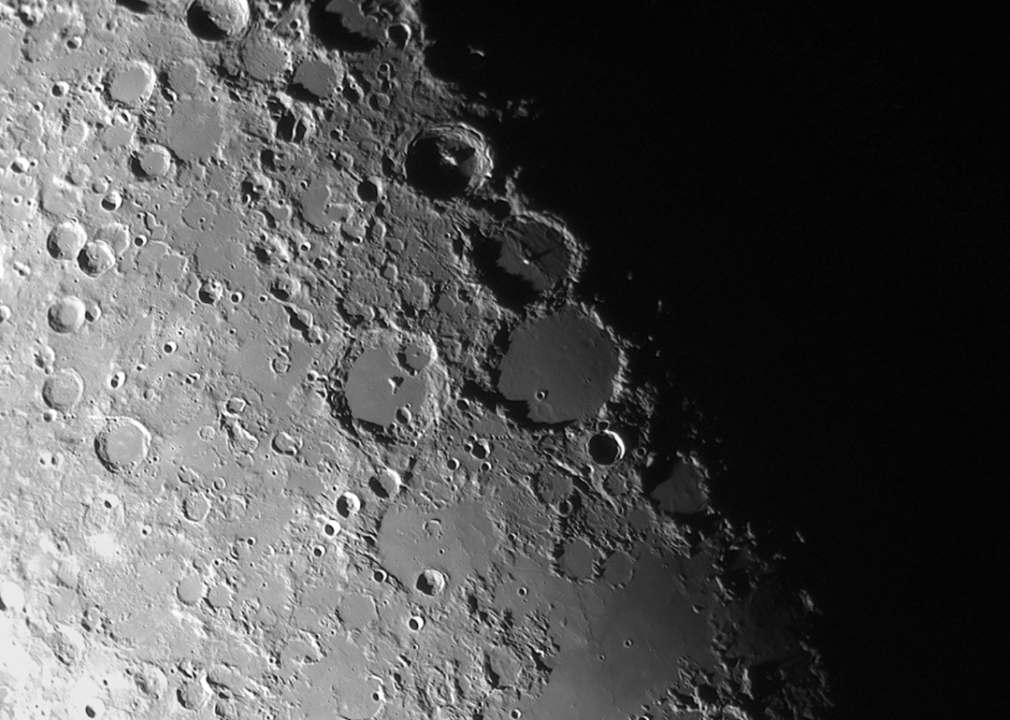 For millennia, the moon has been an endless source of fascination for mankind. Sitting roughly 240,000 miles from Earth, it is our only natural satellite and the largest visible object in the night sky. Its beauty is described by poets, it is thought to affect our moods, and it’s studied by scientists and stargazers alike. The moon isn’t just a pretty view through a telescope, however—it plays an important part in keeping our planet stable and livable.

In 1969, NASA took its “one giant leap for mankind,” making history by putting a man on the moon for the first time. During its Apollo missions in the late ’60s and ’70s, the space program sent a total of nine missions to the moon, with six of those missions landing astronauts to explore the surface. The data collected by the moon landings not only helped scientists learn about the moon itself but also how it affects our own planet. Today, NASA has three robotic spacecraft orbiting the moon, the Lunar Reconnaissance Orbiter, which was created to make a 3D map of the Moon’s surface, and the two ARTEMIS spacecraft probes, launched in 2011 to provide data on solar wind.

This ongoing research has dramatically expanded what we know about the moon since that first NASA launch. Stacker compiled a list of 25 things we’ve learned about the moon since 1969. Resources used include data from NASA, the Smithsonian, and breaking news reports, with the aim of creating a comprehensive list of these monumental discoveries about our universe.

You may also like: 50 images of the universe from the Hubble Space Telescope 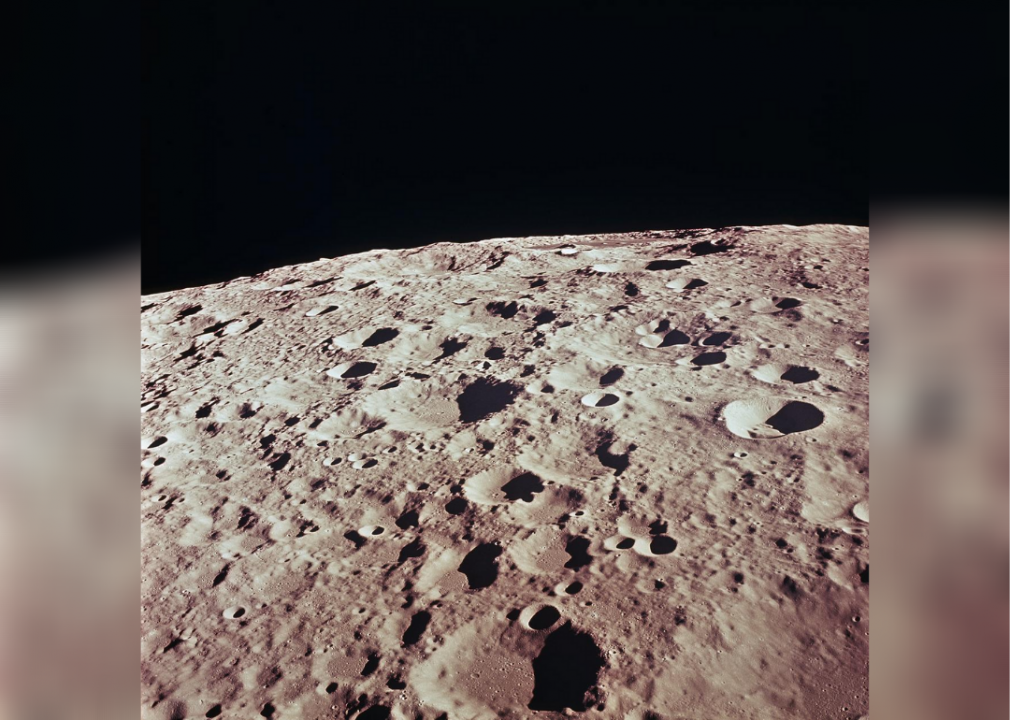 The moon is lifeless

Research has shown that the moon has no living organisms, including fossils or native compounds. There are some traces of nonbiological organic compounds, but those are attributed to contamination by meteorites. 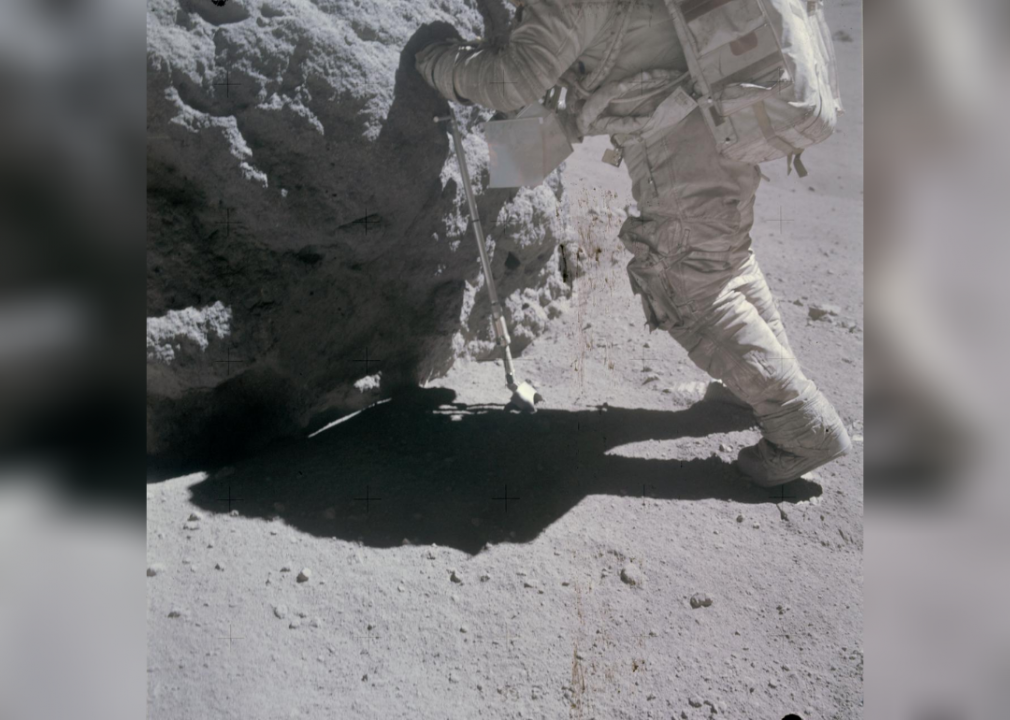 The moon is about 4.5 billion years old

It is thought that the moon was formed after a large object or series of objects slammed into Earth, with some of the material exploding into space and creating our lunar neighbor. After Apollo astronauts brought back lunar rocks for analysis, scientists studied ancient zircon fragments and were able to determine that this took place approximately 4.5 billion years ago. 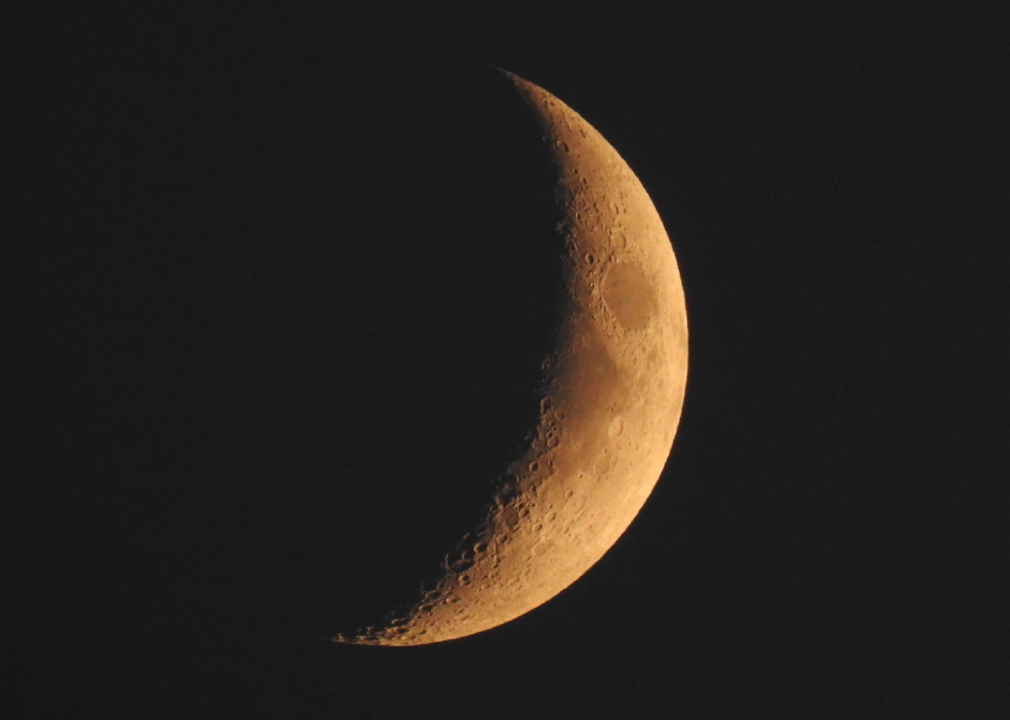 The moon is not primordial—it evolved

The moon is considered an evolved terrestrial planet made of rocky material that has been melted, crushed by meteorites, and erupted by volcanoes. Its internal zoning is actually similar to Earth’s, with a thick crust, lithosphere, and “partly liquid asthenosphere,” according to NASA. 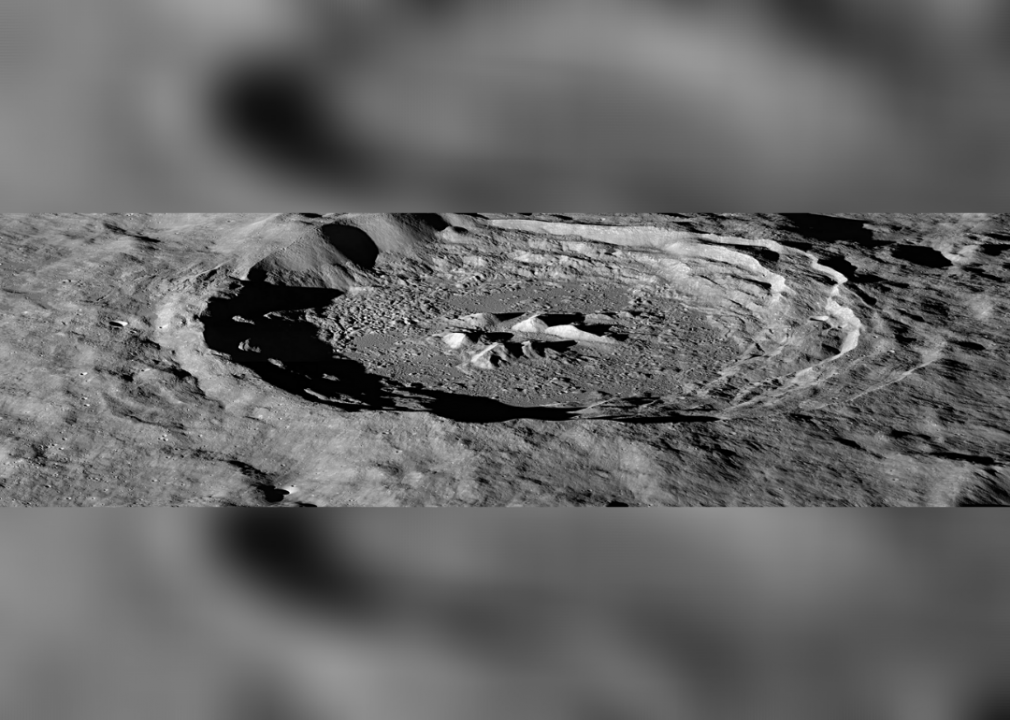 The moon is shrinking

After reviewing moonquake data collected between 1969 and 1977, scientists determined that approximately 25% of the moon’s seismic activity was generated by released energy from scarps, or stairstep cliffs on the moon’s surface. This activity comes from the contraction of the moon’s crust as it cools, which has caused it to shrink by about 150 feet over the last several hundred million years. 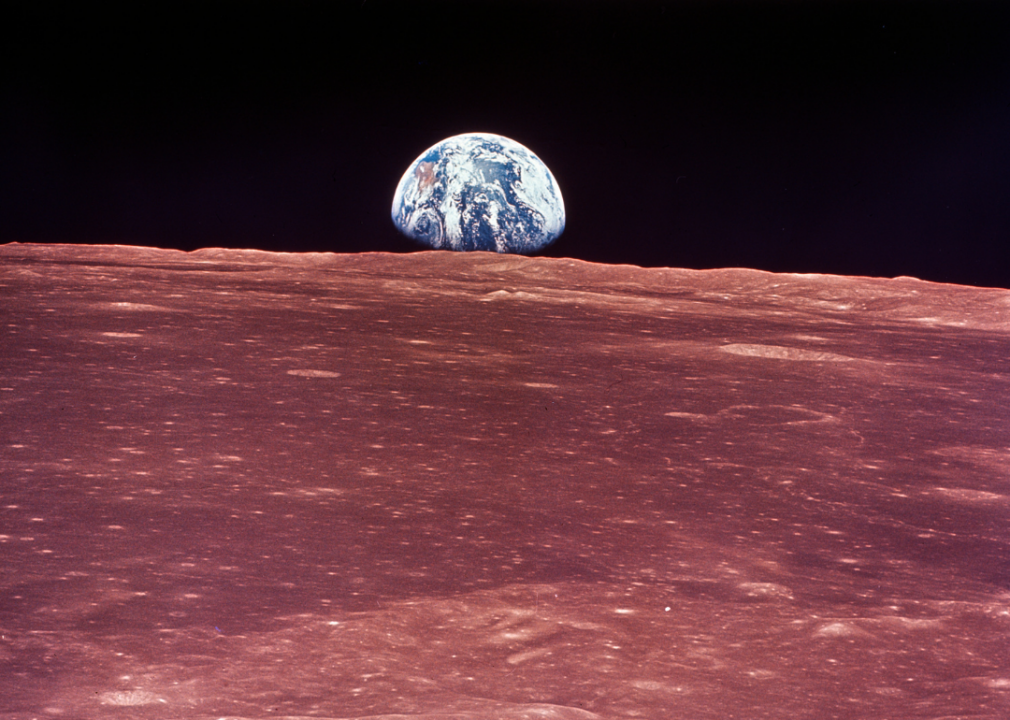 There is water on the moon…

When the Apollo astronauts first explored the moon, they thought it was a dry planet. However, in 2009, NASA’s Lunar Reconnaissance Orbiter produced data that showed water locked up in ice. As the moon warms and cools throughout the day, those water molecules actually float around until finding areas cool enough to settle back onto the lunar surface.

You may also like: States with the biggest household carbon footprints 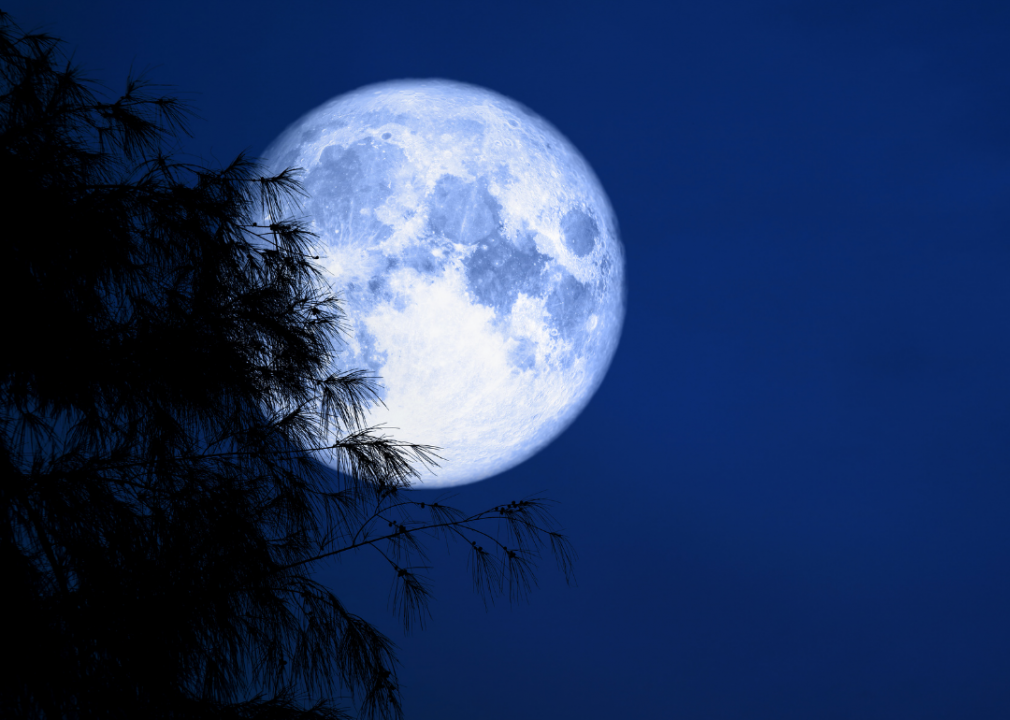 …and not just in cold, dark places

NASA in 2020 detected water on sunlit portions of the moon. The agency’s Stratospheric Observatory for Infrared Astronomy detected water molecules in Clavius Crater, located in the southern hemisphere, a sunlit side of the moon. Data indicated water concentrations of 100 to 412 parts per million in a cubic meter of soil, which is about the equivalent of a 12-ounce bottle of water. 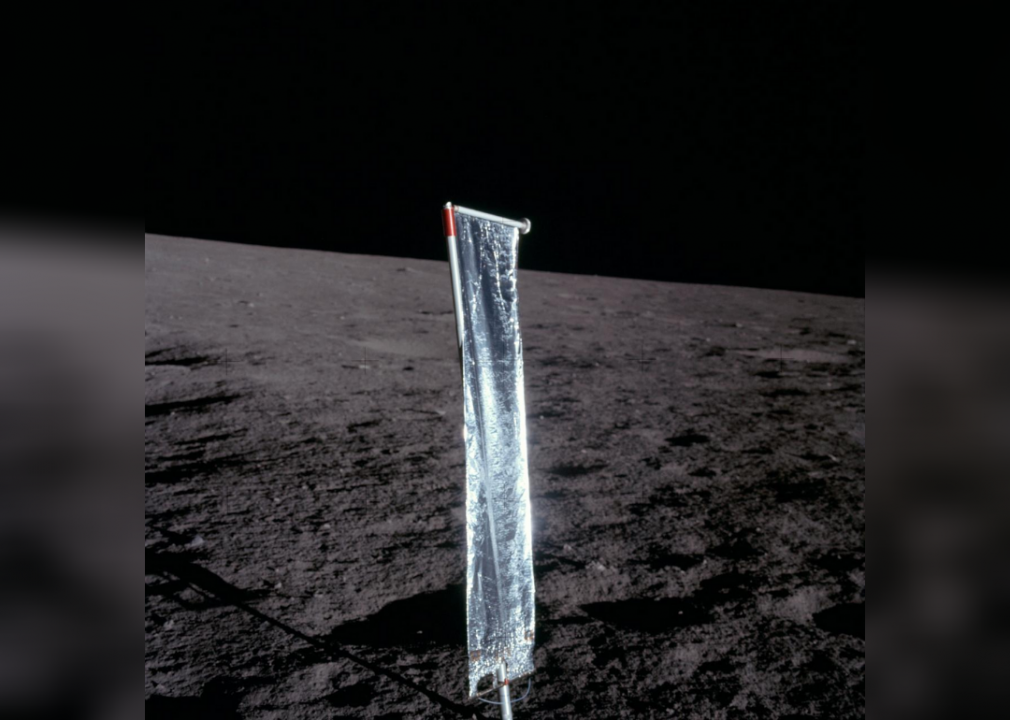 The Apollo 11 mission was the first to deploy what was known as the Solar Wind Composition Experiment, which involved an aluminum foil sheet attached to a pole. The sheet was unfurled and exposed to the sun for 77 minutes, then collected and transported back to Earth to be analyzed. The data was collected from the sheets over many years of the Apollo missions, helping scientists determine variations in the composition and intensity of solar winds. 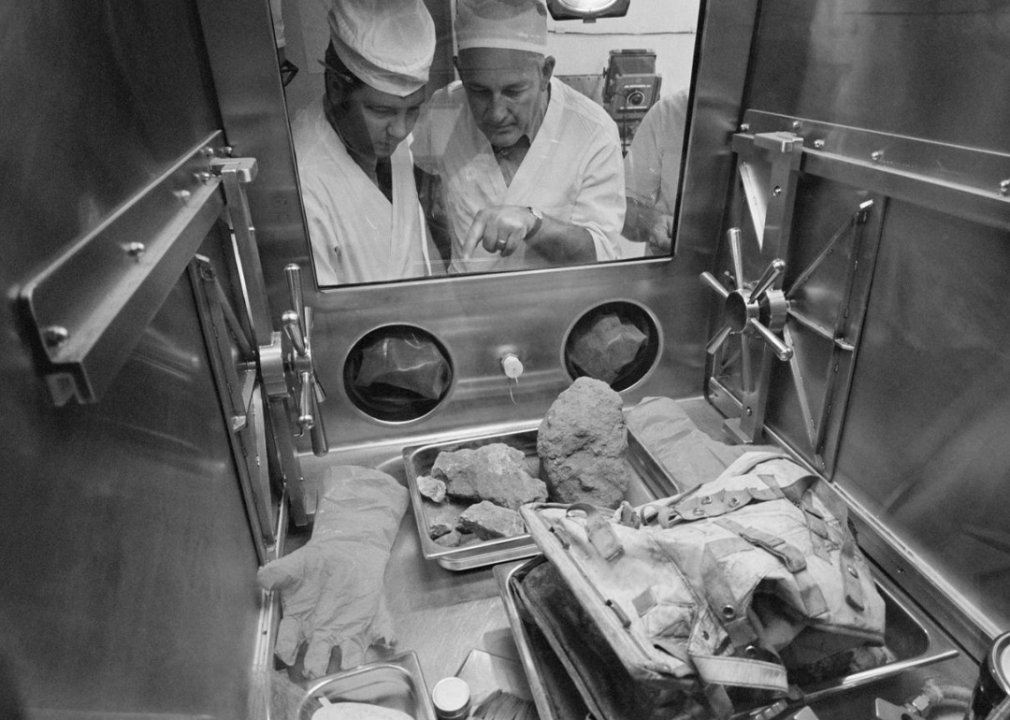 While the Earth’s oldest surfaces are always being repaved by geological forces such as erosion and the shifting of tectonic plates, the moon’s surface exists with minimal disturbance. Moon rocks range from 3.2 billion years old in the darker regions to almost 4.6 billion years in those areas with more light. 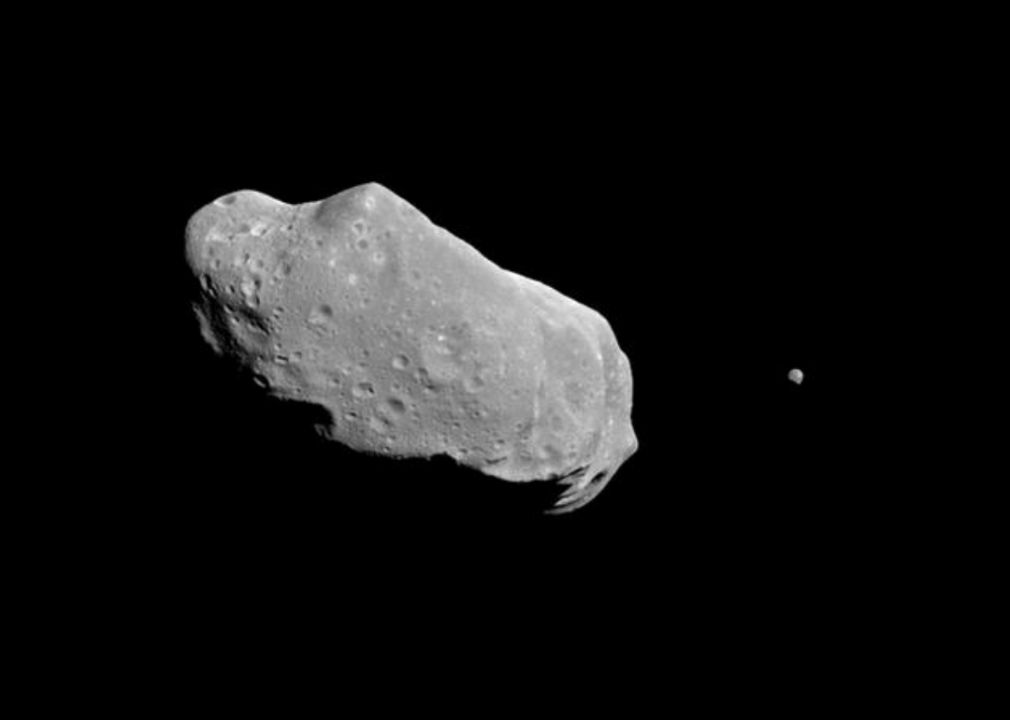 The moon’s craters were caused by asteroid impacts

The surface of the moon is covered with craters, the majority of which were formed by meteorites colliding with the lunar surface. While meteorites have also hit Earth, the planet’s atmosphere helps protect it from impact, and geologic activity such as weather and volcanoes erode signs of impact. The moon has virtually no geologic activity or atmosphere, so lunar craters from billions of years ago are still visible. 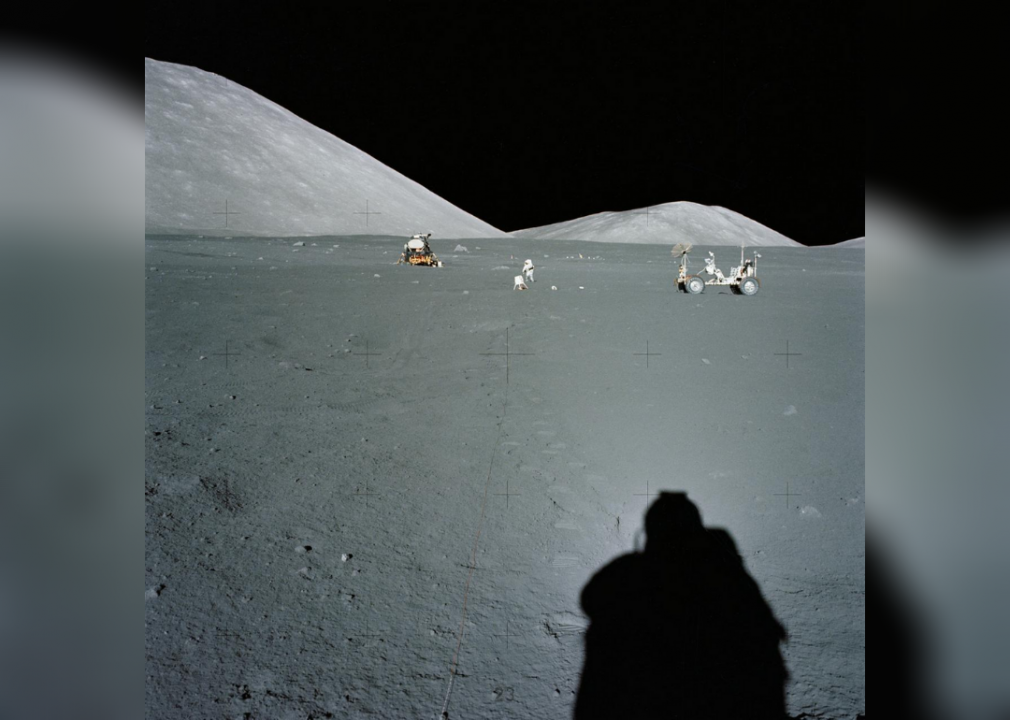 Its crust offers perspective on other planets

Because it doesn’t have an atmosphere, volcanoes, or plate tectonics to disrupt it, the moon’s crust is very well-preserved. Scientists have been able to determine the age of lunar surfaces, and data collected from moon samples helps them to estimate the ages of other planets.

You may also like: Cities doing the most for a clean energy future 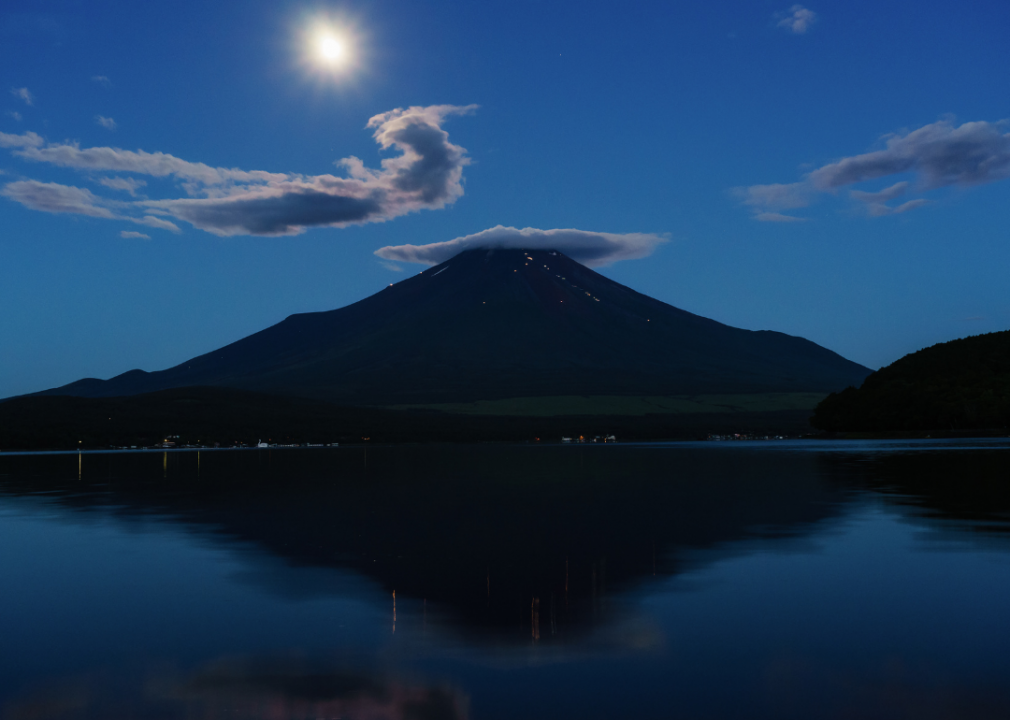 The Earth and moon are genetically related

Similar compositions of moon and earth rocks have led scientists to determine common ancestry between the two. Unlike the Earth, however, the moon does not have enough iron or other elements to form atmospheric gas or water. 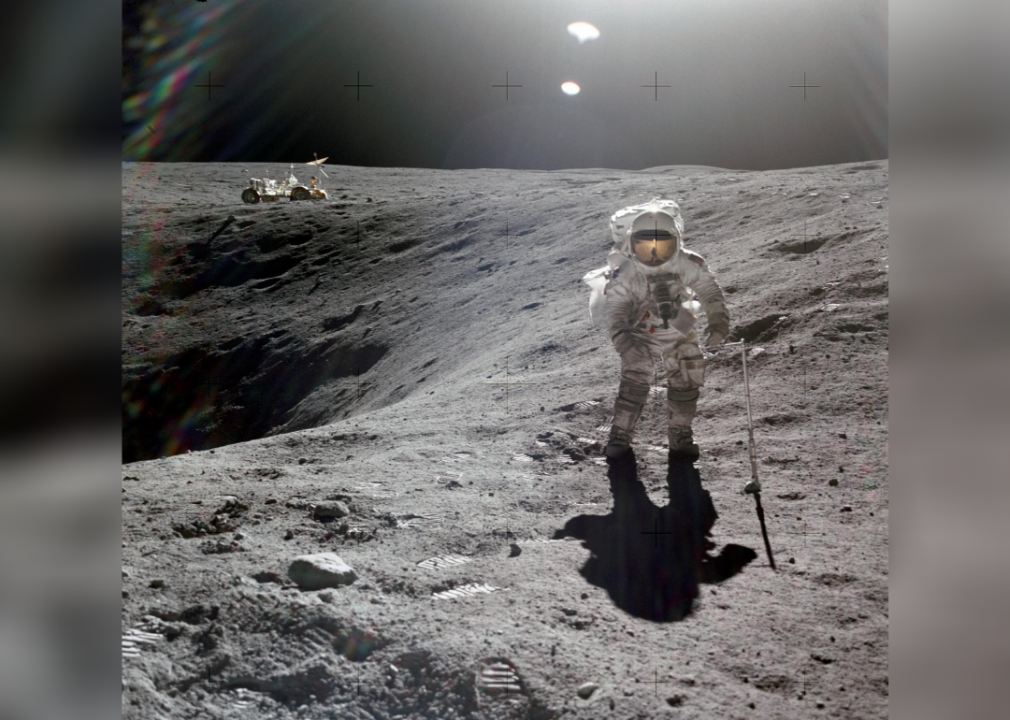 The lunar surface is solid

Scientists originally thought the moon was covered with a layer of unknown material, with no real knowledge of what that material might be or how safe it would be for astronauts to explore it. After studying the observations of the Apollo 11 astronauts and the samples they took from the lunar surface, they were able to determine that it is a mix of grains of dust and large rocks. 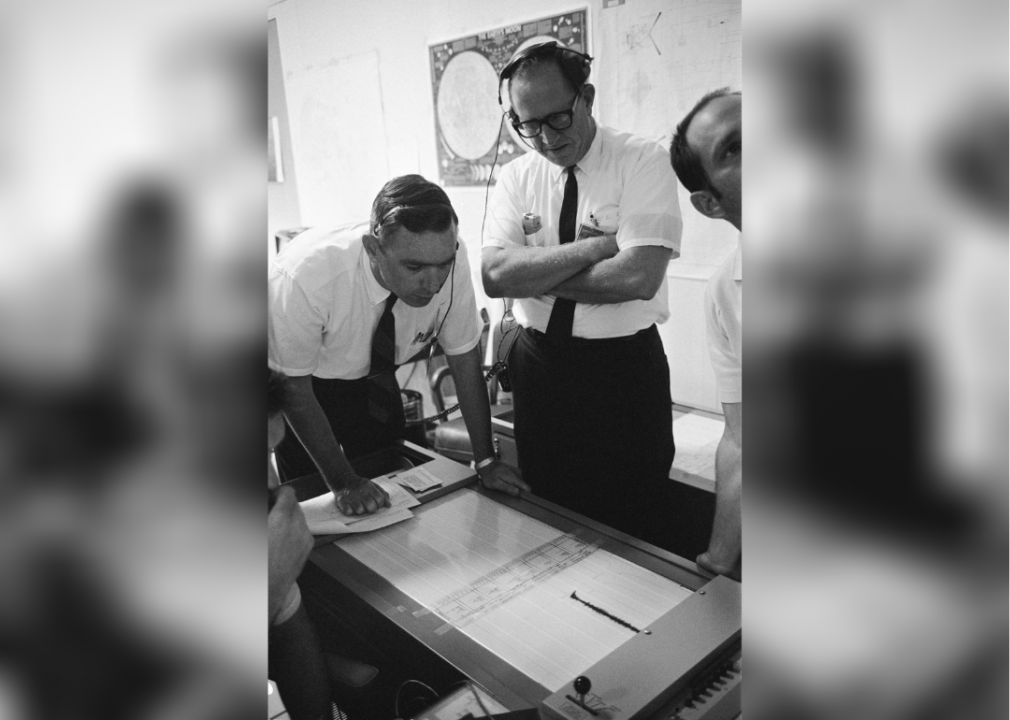 The moon is seismically active

As part of the Apollo space program, seismometers were placed on the surface of the moon. They were retired in the late ’70s, but during the time they were actively recording seismic activity on the moon, there were 28 moonquakes of varying magnitudes. Later research via the Lunar Reconnaissance Orbiter showed fault lines in the moon that are less than 50 million years old, as well as the displacement of boulders across the surface, both of which point to the occurrence of regular moonquakes. 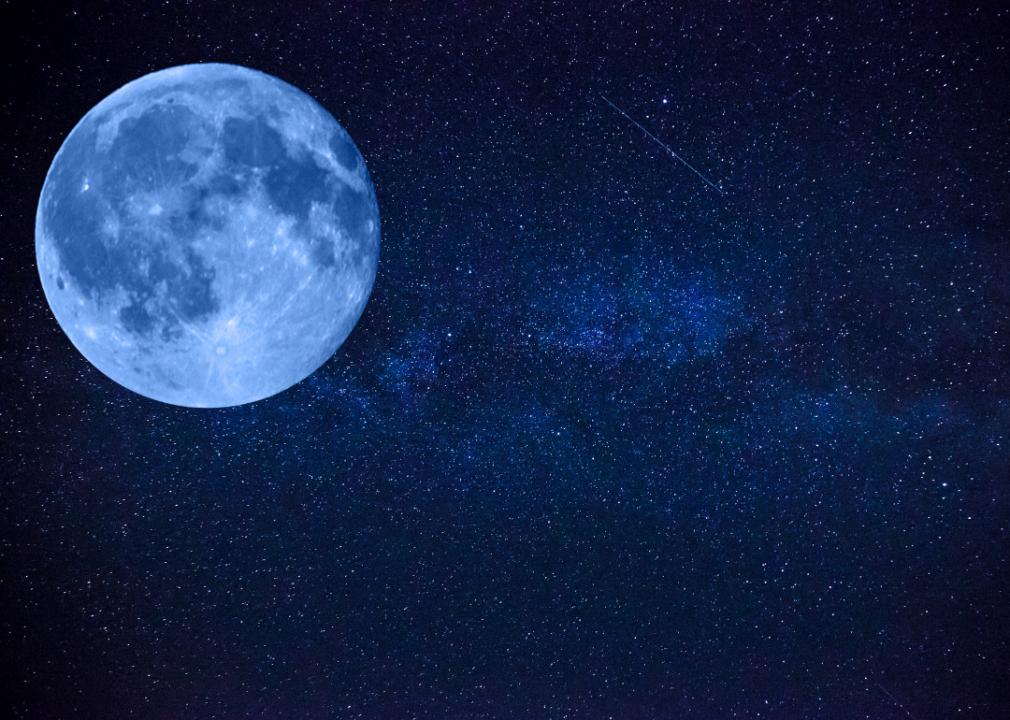 The moon is covered with rocks and dust called regolith

Samples collected by Apollo 11 show that the moon is covered with regolith, a mix of dust and rock fragments. Due to the lack of atmosphere, the regolith is also exposed to micrometeorites and solar wind irradiation, which breaks up its rocks and melts portions of it, creating bits of volcanic glass fragments. 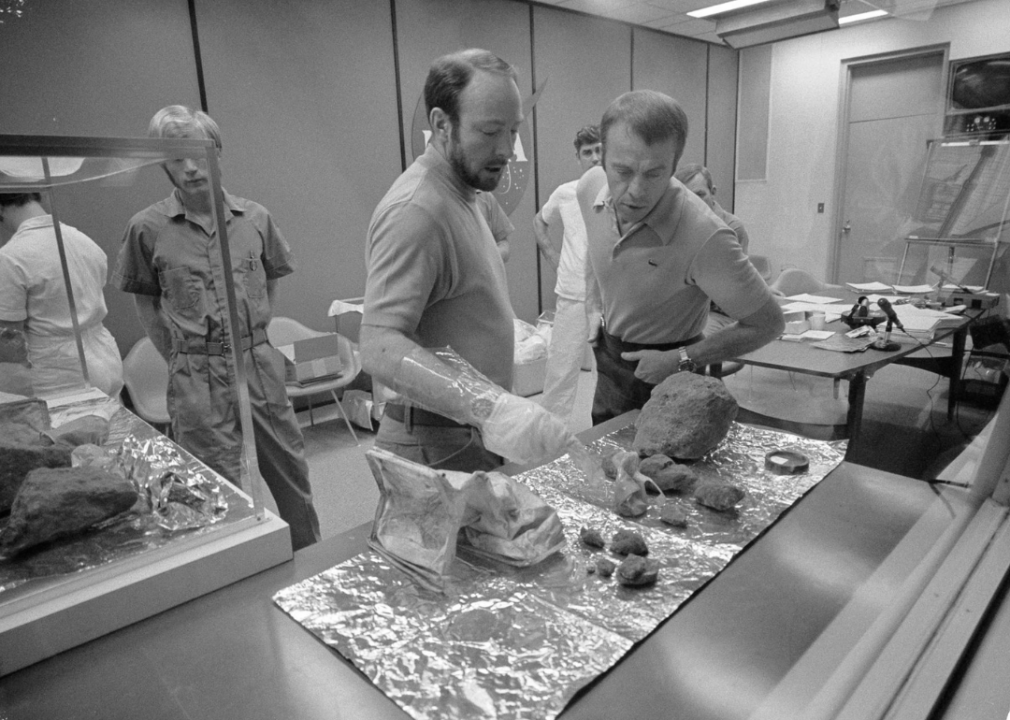 Moon rocks were formed in high temperatures without water

The consistency of the moon’s rocks falls into three basic categories: basalts, which fill the mare basins and look like lava, anorthosites, which are lighter rocks that resemble those on Earth, and breccias, which are composite rocks formed from others crushed and mixed by meteorite impact. Despite the fact that there is water on the moon, all three types of moon rocks are formed without water, whereas on Earth, water plays a big role in the creation of rocks such as shale or limestone.

You may also like: Space discoveries that will blow your mind 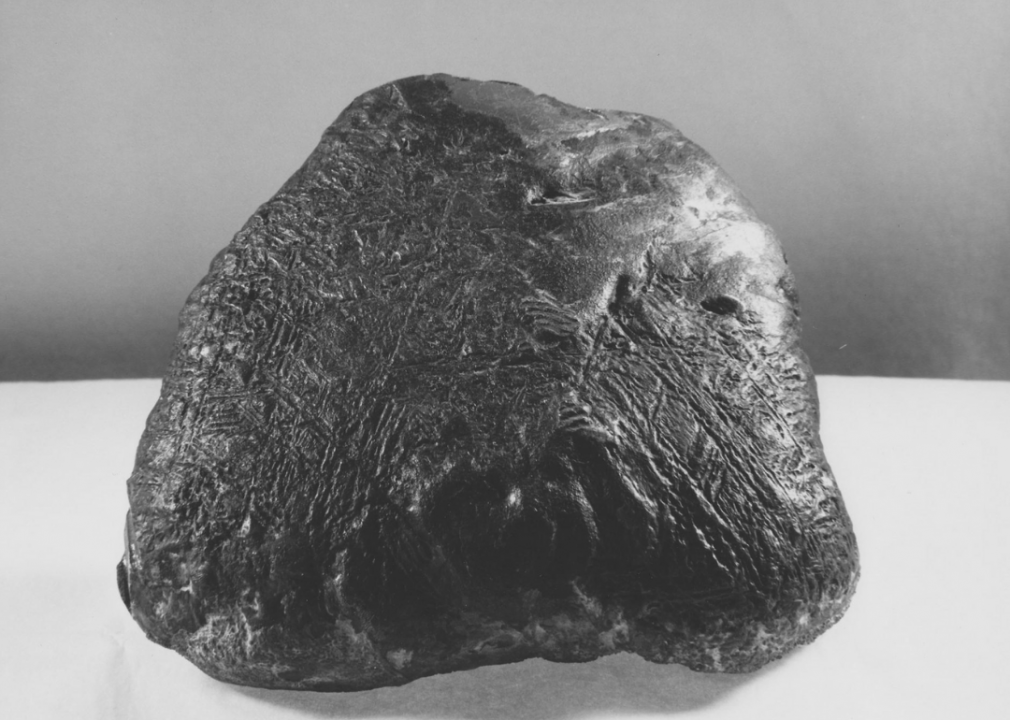 Scientists aren’t sure where it came from, but there is a giant deposit of heavy metal lodged underneath the moon’s South Pole-Aitken basin. It is estimated to weigh around 2.4 quadrillion tons and is thought to possibly be the remains of an iron-nickel asteroid that crashed into the moon 4 billion years ago. 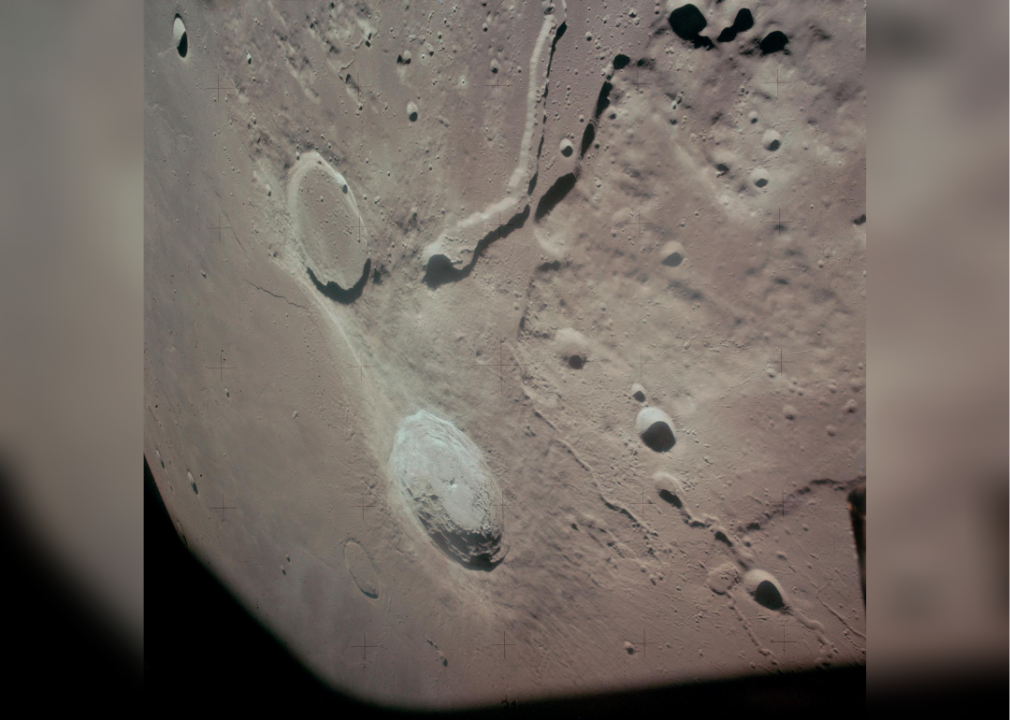 The moon has at least two lunar pits

Data gathered from NASA’s moon probe, the Lunar Reconnaissance Orbiter, has shown images of at least two large holes in the moon known as lunar pits. The holes are thought to form when a subterranean lava tube collapses, although the Mare Ingenii pit lies in an area that has few volcanic features. While impact craters are all over the moon’s surface, lunar pits are considered rare. 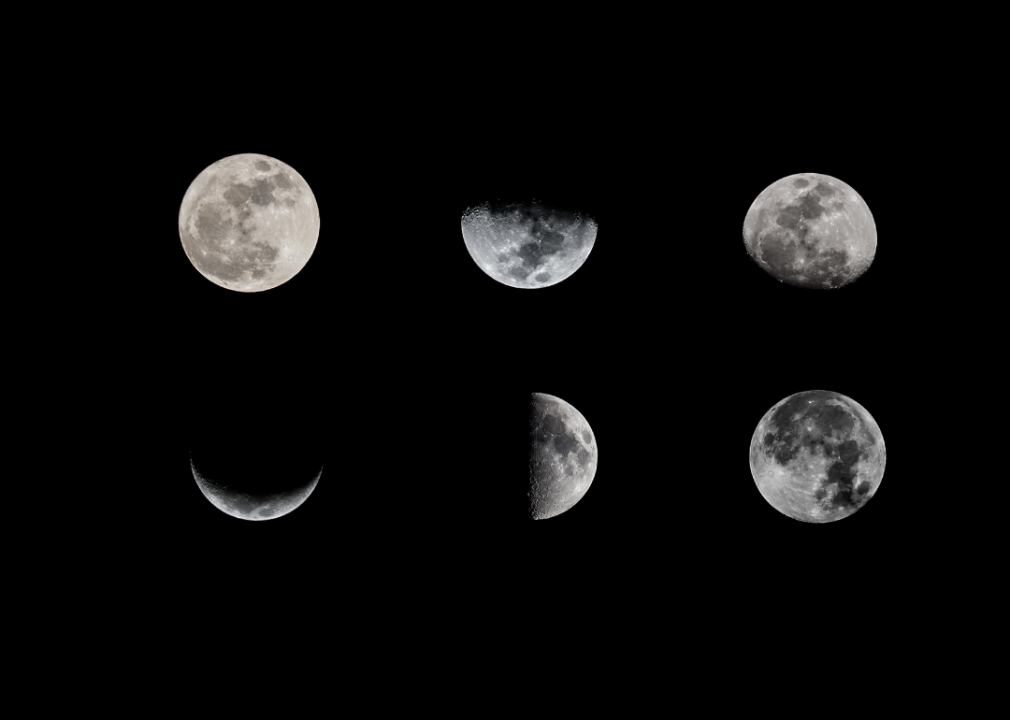 The moon has a crust, mantle, and core—just like Earth

Apollo 11’s Passive Seismic Experiment, which detected and measured moonquakes, also helped scientists determine that there is a small core at the moon’s center. Subsequent seismometers deployed during Apollo 12, 14, 15, and 16 revealed even more information, with data indicating a lunar crust that is 37-44 miles thick—or about three times the thickness of Earth’s crust. 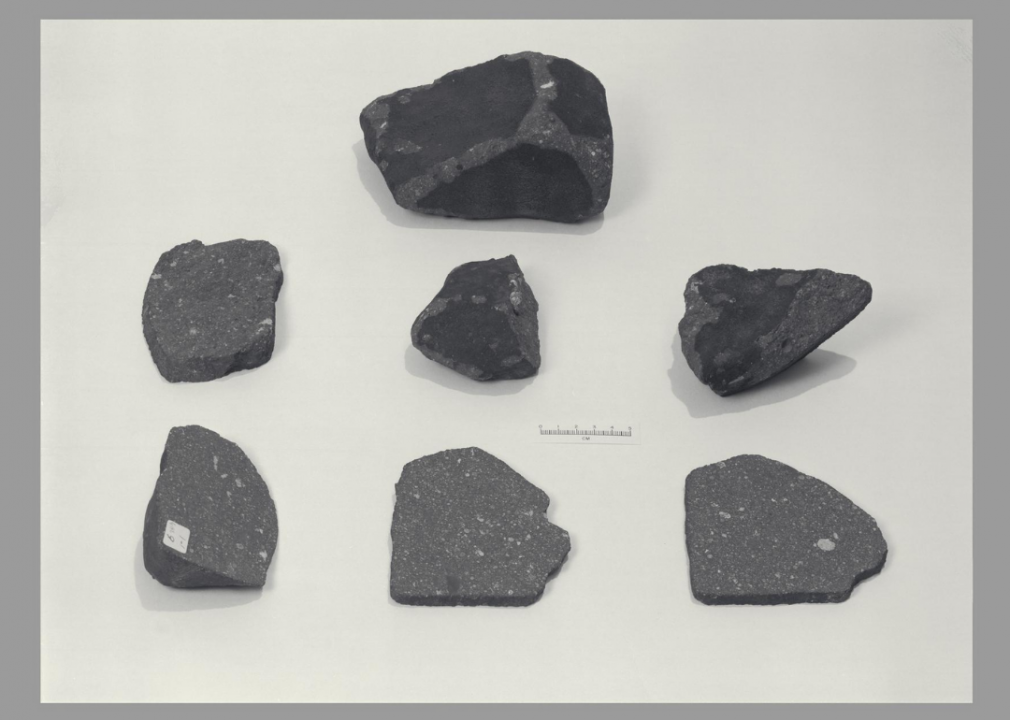 The Earth and moon trade meteorites

Scientists and researchers have found meteorites on Earth that were ejected from the moon. Asteroid impacts on the moon expel meteorites into space, bringing with them lunar rock from all areas of the moon’s surface. Studies also suggest that rocks from Earth travel to the moon, and computer simulations have led scientists to believe that the moon may have asteroid debris from Earth, Venus, and Mars. 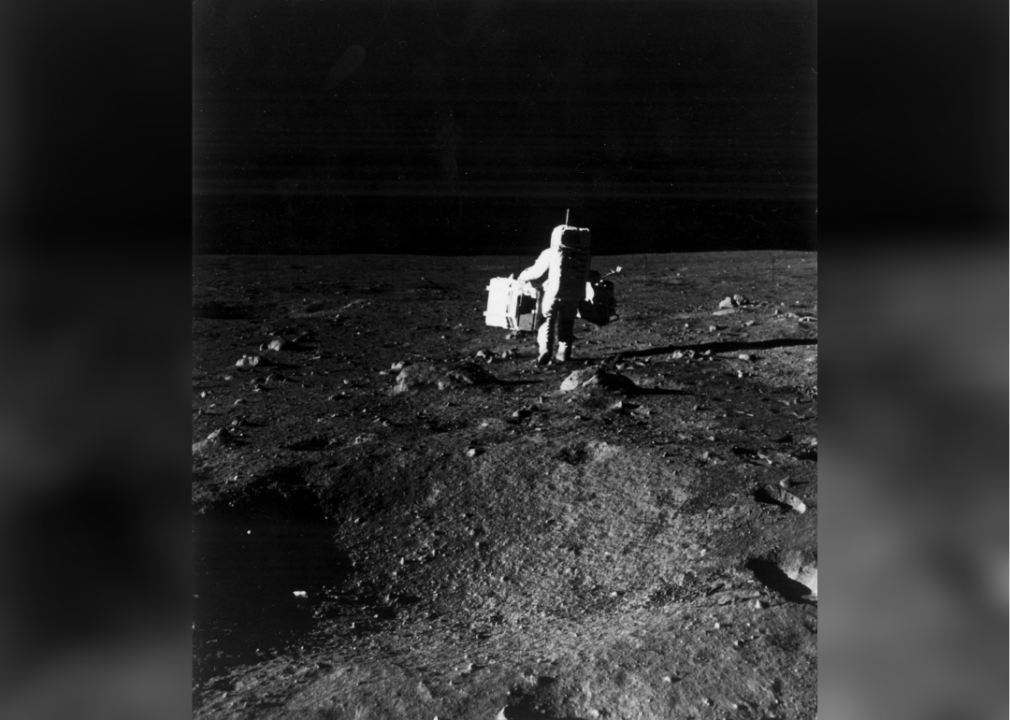 The moon is moving away from Earth

The pace is minuscule, but there’s no doubt the moon is slowly receding from the Earth. During their mission, Apollo 11 astronauts placed a Laser Ranging Retroreflector on the moon’s surface, which helps measure the distance between Earth and the moon. The Retroreflector, a series of mirrors that reflect laser pulses, shows that the moon is retreating at a rate of about 1.5 inches per year.

You may also like: 30 breathtaking images from NASA’s public library 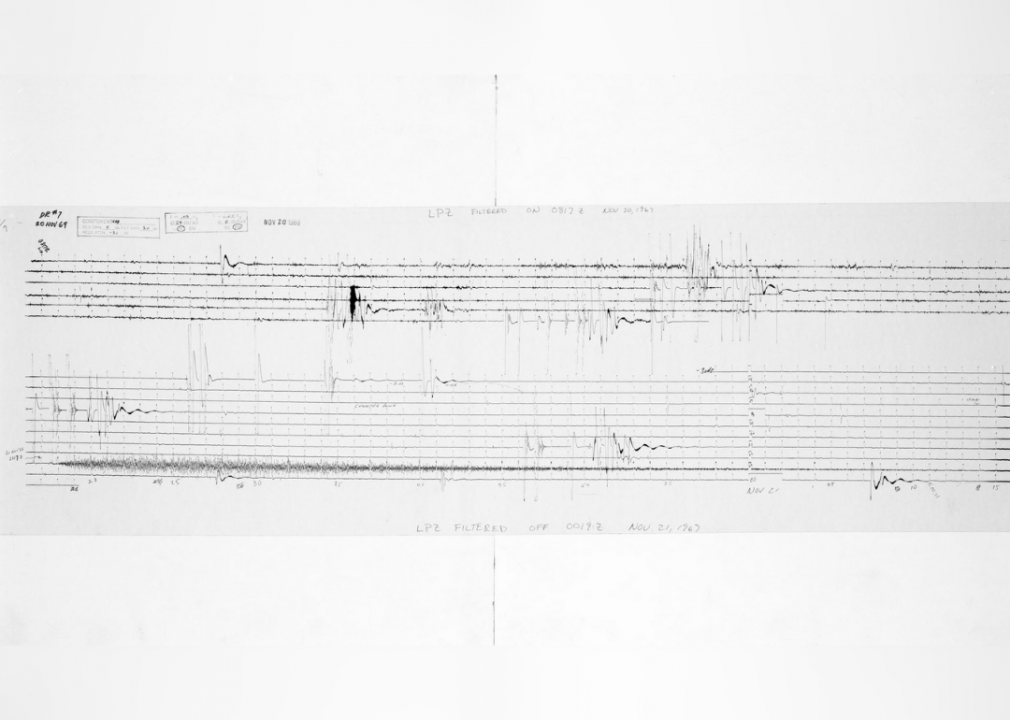 Moonquakes can last up to 10 minutes

Unlike earthquakes, which usually only average about 30 seconds, moonquakes can go on for quite some time. These shallow tremors originate 12-19 miles below the lunar surface and last upward of 10 minutes. While scientists aren’t sure what causes these long quakes, the activity has helped them to understand early seismic activity on Earth, as well as the role liquid water plays on our planet by spreading energy caused by quakes, thus softening their vibrations. 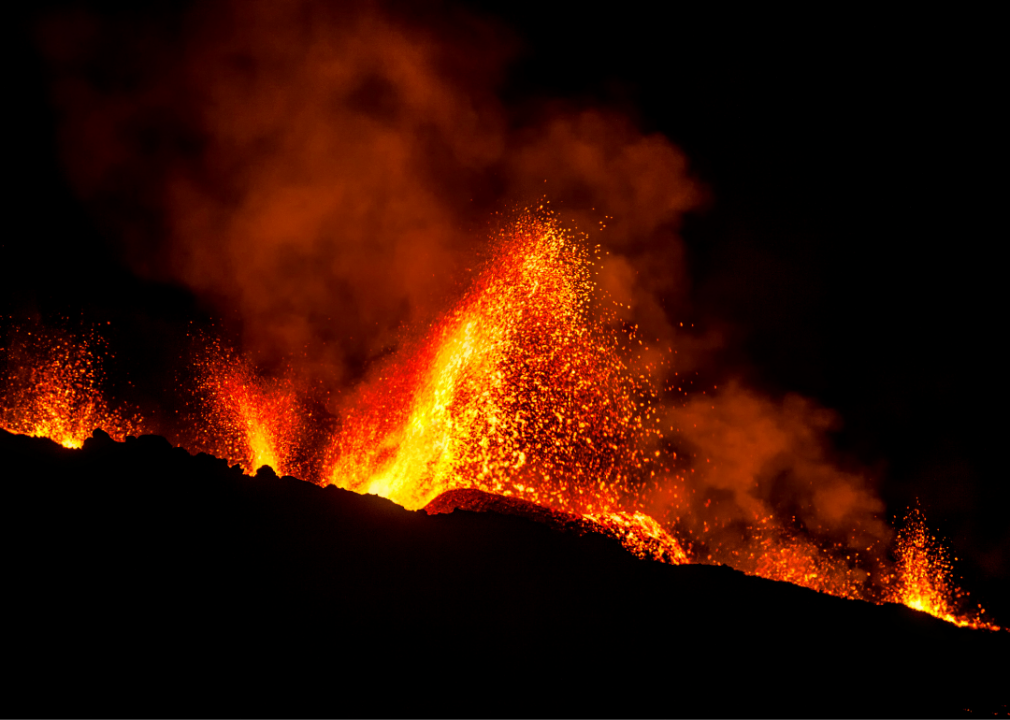 When it was still very young, the moon melted to form a magma ocean

Between approximately 4.4 and 4.6 billion years ago, a magma ocean tens of kilometers deep covered the moon. An early crust on that ocean formed what became the lunar highlands, and meteorite impact reduced that crust more, creating mountain ranges that built up between the impact basins. 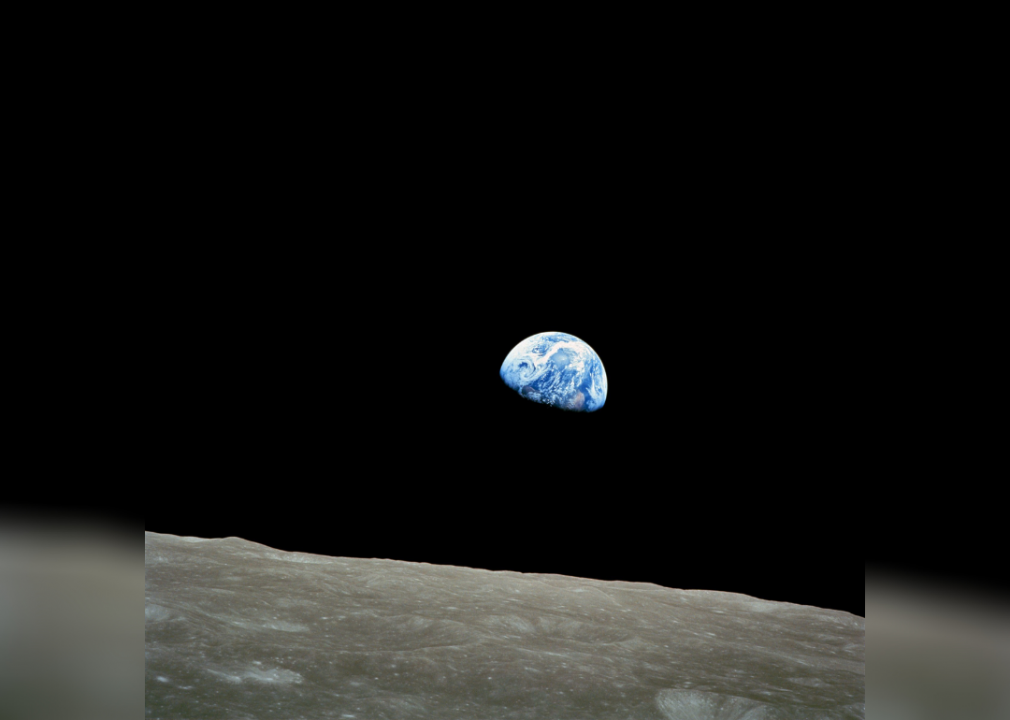 Earth has a magnetic field created by the movement of liquid iron and nickel in the outer core that helps protect it from destructive natural forces like solar wind or cosmic particles. Scientific research of how the moon’s gravity affects the planet indicates that it “tugs” on the Earth’s mantle, which sits on top of that liquid outer core, and causes the liquid to move around, helping to generate energy that strengthens Earth’s shield. 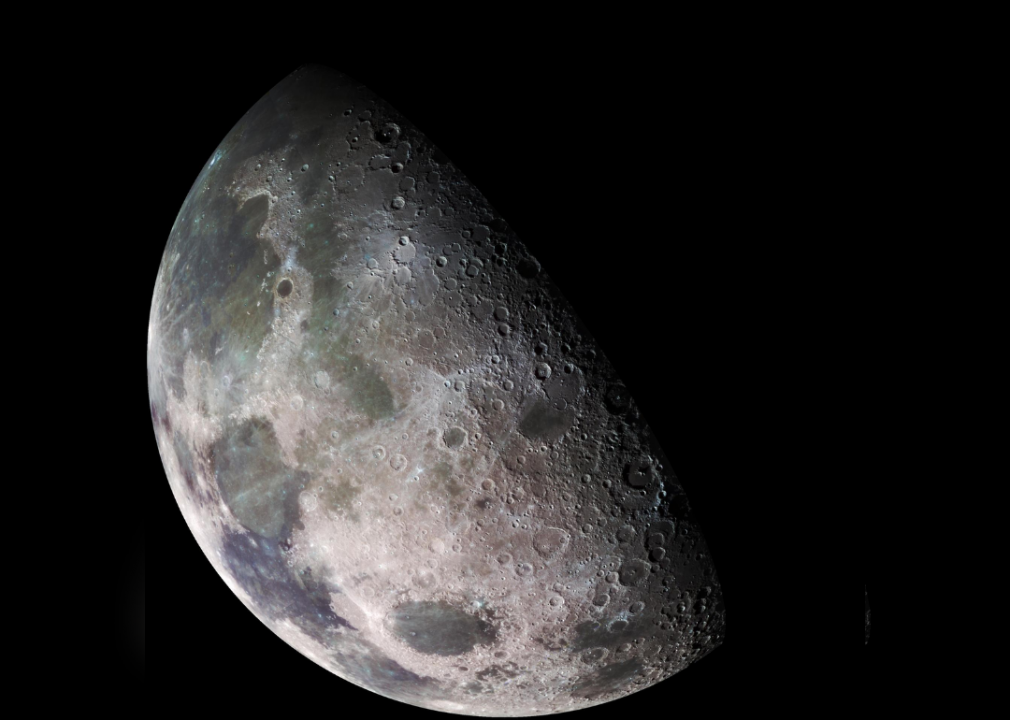 The moon is asymmetrical

It might look perfectly round when it’s full, but the moon is actually asymmetrical. Its crust is thicker on one side than the other, and there are large masses beneath the surface of many lunar basins potentially caused by accumulations of lava. Scientists believe the unevenness and asymmetry could be a result of Earth’s gravitational pull. 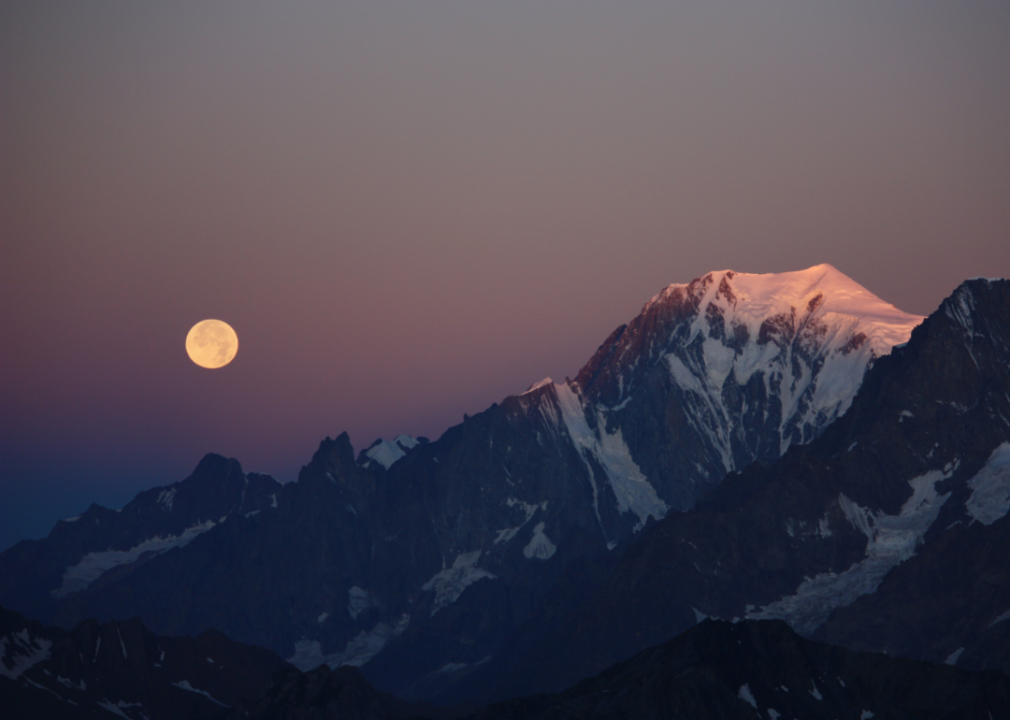 NASA’s Lunar Reconnaissance Orbiter was able to detect a location in the moon’s Hermite Crater that was minus 415°F, colder than any other temperature recorded in the solar system. Even on faraway Pluto, the coldest temperature recorded was minus 300°F, despite its being much further from the sun. Similarly cold regions were found at the bottoms of craters at the lunar South Pole in areas that were permanently shaded.

You may also like: How snowfall levels have changed in 100 U.S. cities