How far people commute in 20 counties 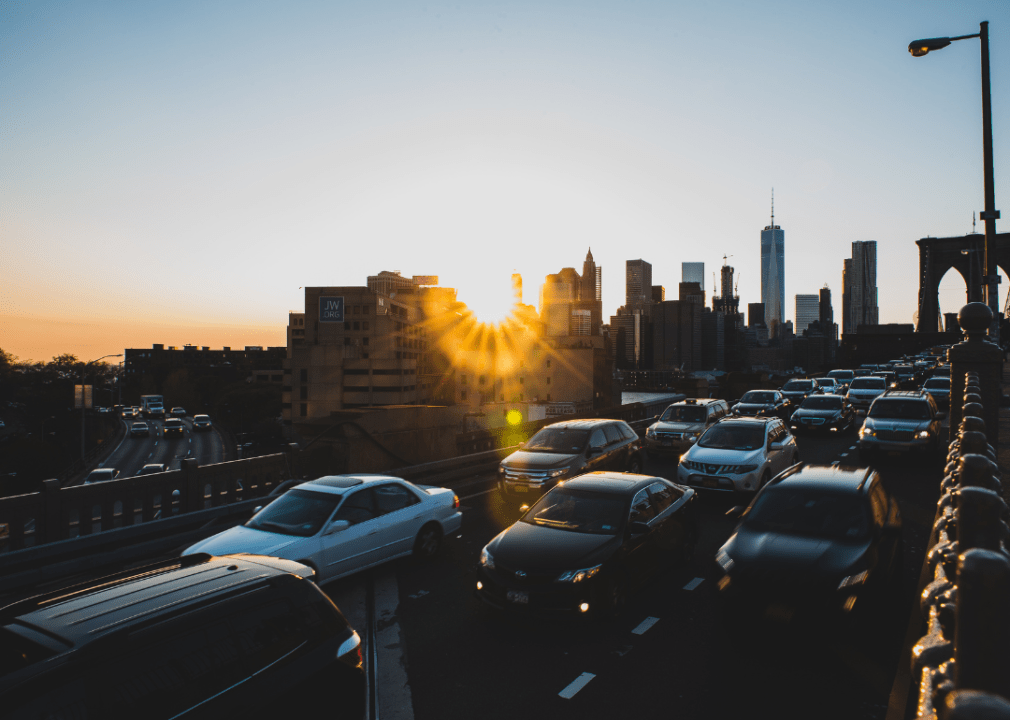 How far people commute in 20 counties

Depending on where you live in the U.S., your daily travel might differ tremendously. Proximity to school, work, and basic services—paired with transportation access—can define the lifestyle within a community.

For example, Los Angeles residents likely know that they will spend hours in their car every week, no matter how much they try to avoid traffic by only traveling during specific times whether for work or play. In New York City, the actual miles traveled in a given day may be relatively low, but commute times can border on excessive depending on subway access and street traffic. Those living in sparsely populated counties will likely have an easier commute and may spend less time on unobstructed roads, unless they need to travel long distances every day. How far people travel—over distance and time—depends on several factors.

RateGenius examined American Community Survey data from the U.S. Census to explore how the commutes compare across the country. The 20 counties in this story were picked to show a cross-section of areas across the U.S., with data on the average one-way commute time, modes of transportation, and the location of workplaces from the 2020 five-year American Community Survey, the most recent available.

Continue reading to learn how far people are traveling in 20 counties across the U.S. 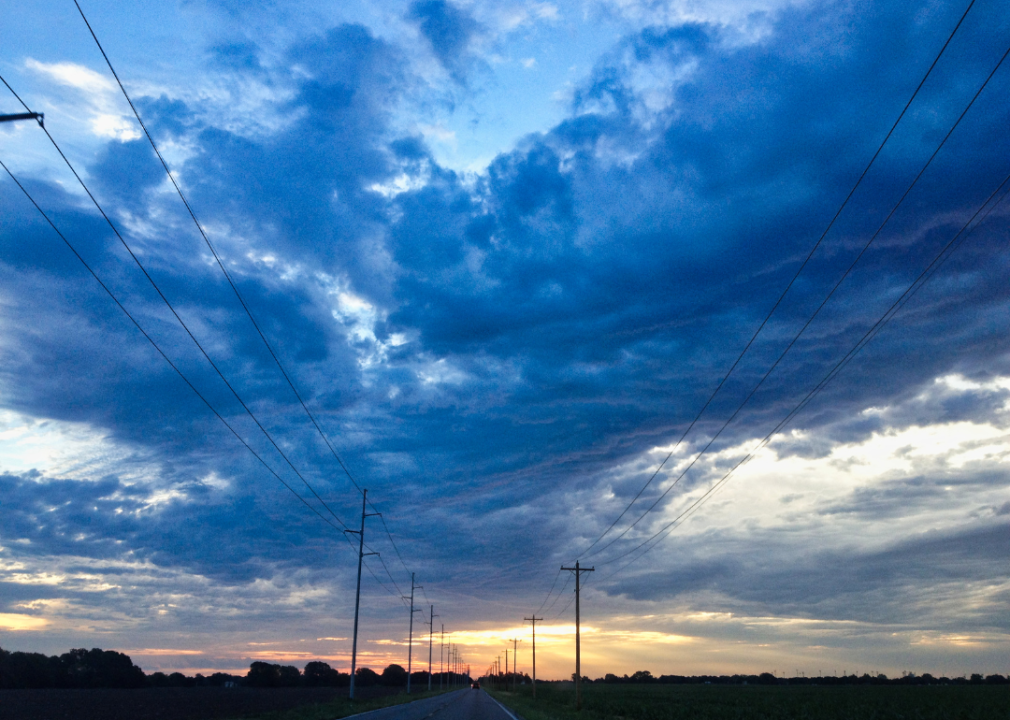 Located about an hour northeast of Little Rock and two hours west of Memphis, White County residents have a host of highways and routes to choose between for traversing the region. Among these is the four-lane Highway 64, which was widened in 2017 to accommodate more traffic. The average one-way commute time for workers not working at home was 23.4 minutes in 2020, slightly below the national average of 26.9 minutes. 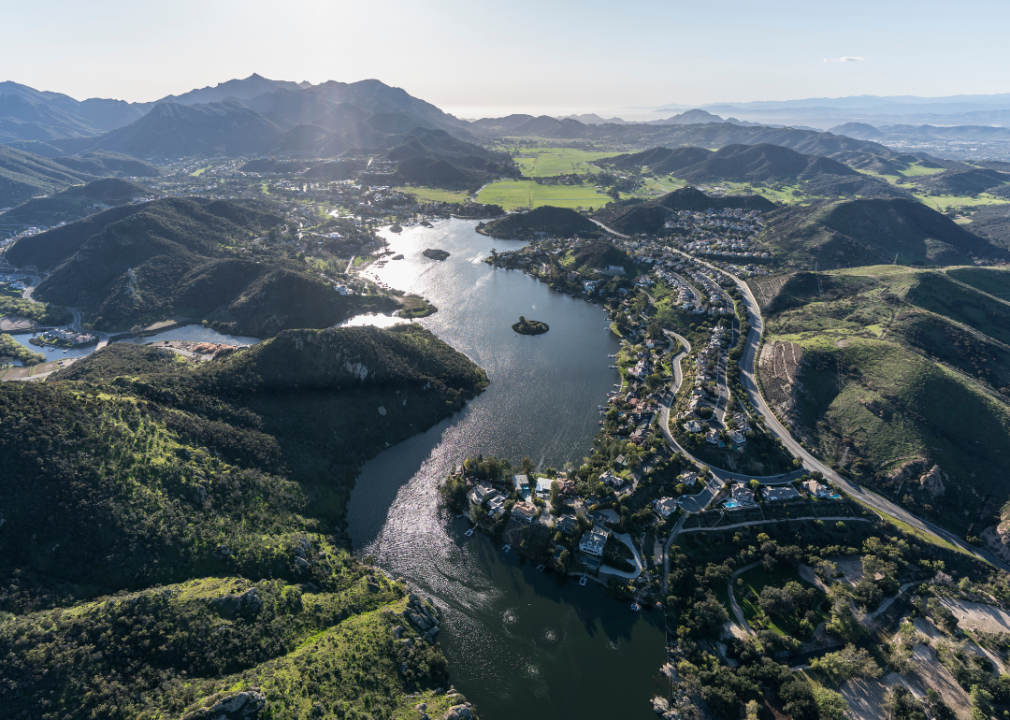 Southern California is known for its heavy traffic, but Ventura County residents have little to complain about. Sitting between Los Angeles and Santa Barbara, Ventura County has many opportunities for people to study and work, meaning residents don’t have to travel long distances to get to their places of work or study. The county is home to a variety of industries—including tourism, biotech, and health care—along with two four-year colleges and several community colleges. 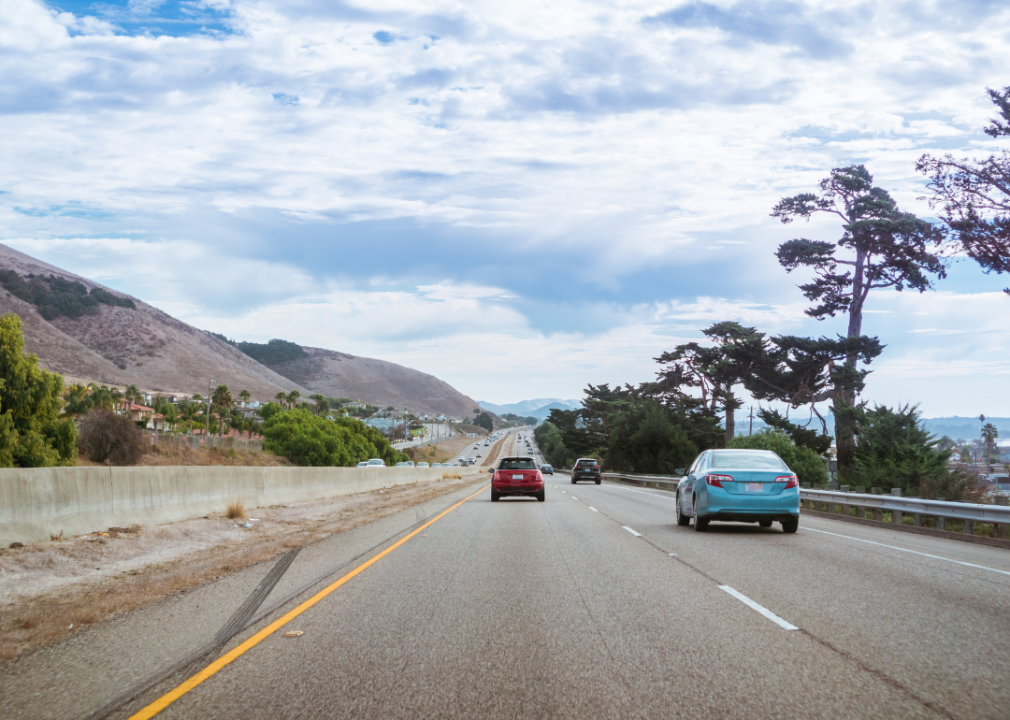 San Luis Obispo is about two hours north on the 101 from Ventura, nestled between the beautiful California coastline and sprawling hills and plains dotted with vineyards, farms, and institutions like California Polytechnic State University. No fewer than nine highways run through San Luis Obispo County, and the Greyhound Bus Line and Amtrak service offer residents public transportation options, if they want to avoid the traffic. As of April 2022, a project is underway to expand Highway 46, improving access to the city of Paso Robles which is known for its exceptional wine. 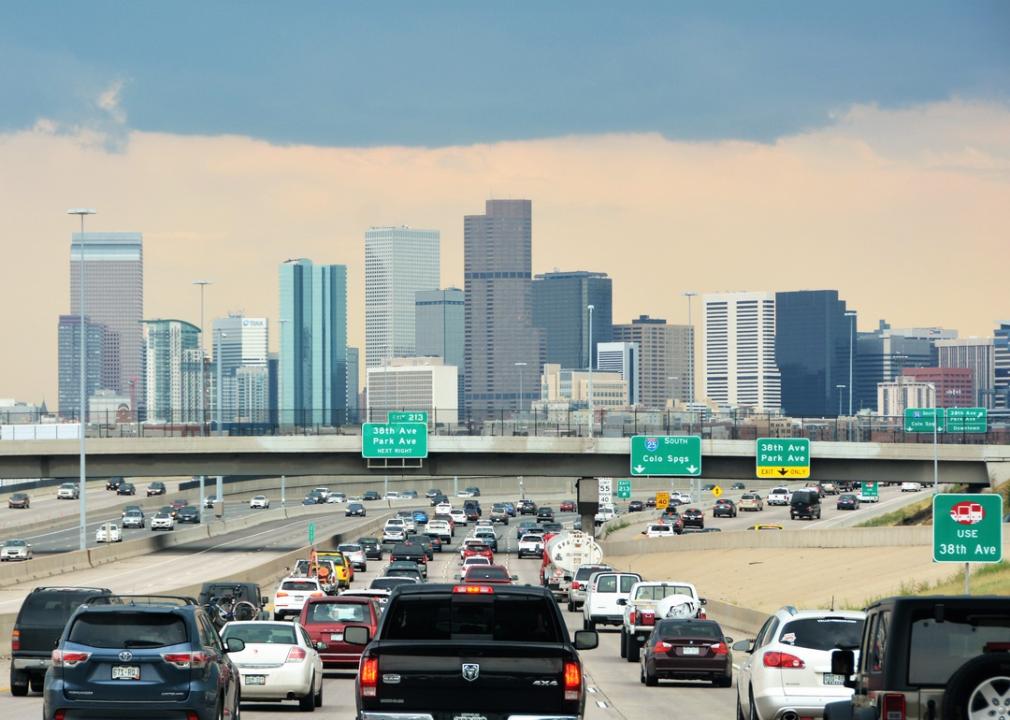 As Denver’s population has surged, the traffic situation has worsened. Denver citizens reportedly spent an average of 36 hours in traffic in 2020—a trend likely to worsen as the county continues to grow.

The city of Denver in 2021 had its deadliest year for traffic fatalities in more than 20 years, according to the city’s latest Vision Zero Report. That same year, the Vision Zero Program launched in excess of 160 projects designed to increase safe access to transportation. 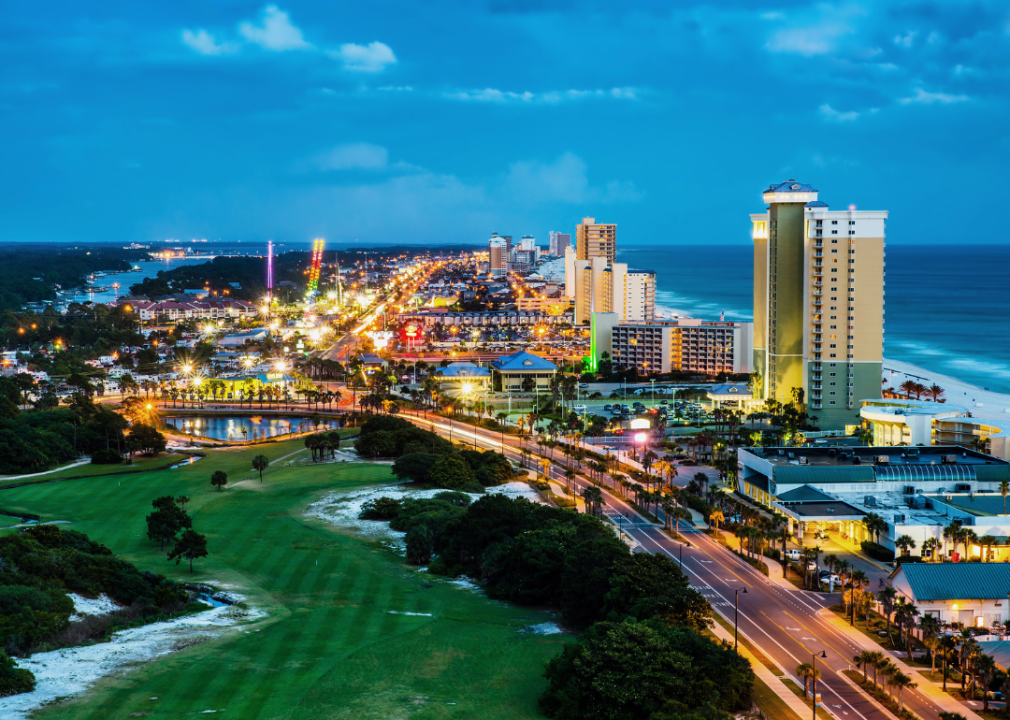 Home to the picturesque white beaches and turquoise waters of the Gulf of Mexico, Bay County, Florida is made up of a combination of water and land, with several bays intersecting its land mass. Traffic isn’t uncommon on the area’s highways, but a new project is slated to ease that traffic. Residents can look for one of the county’s major highways to be widened in the coming years, a plan intended to shorten travel times for motorists traveling in or through the panhandle area. 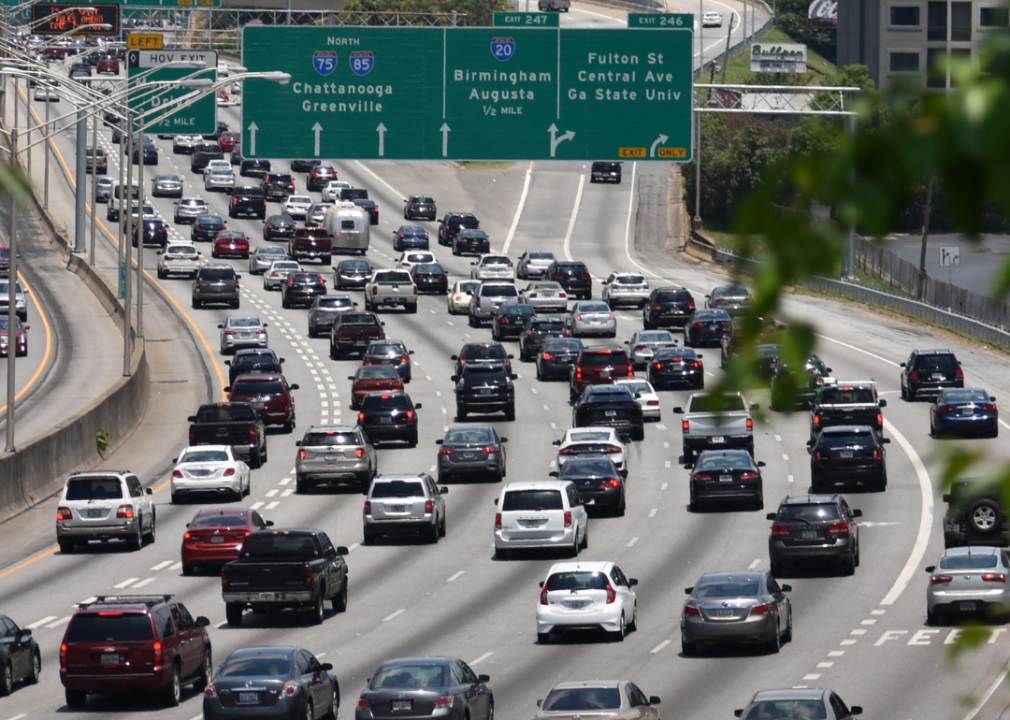 As part of the Atlanta metropolitan area, Paulding County’s proximity to the city comes with traffic issues. Traffic may eventually be eased as a number of secondary highways beginning construction in 2022 add to the area’s major highways, reducing gridlock for motorists. Over two-thirds of Paulding County workers commute outside of the county for work, putting it in the bottom 5% of all U.S. counties by this metric. 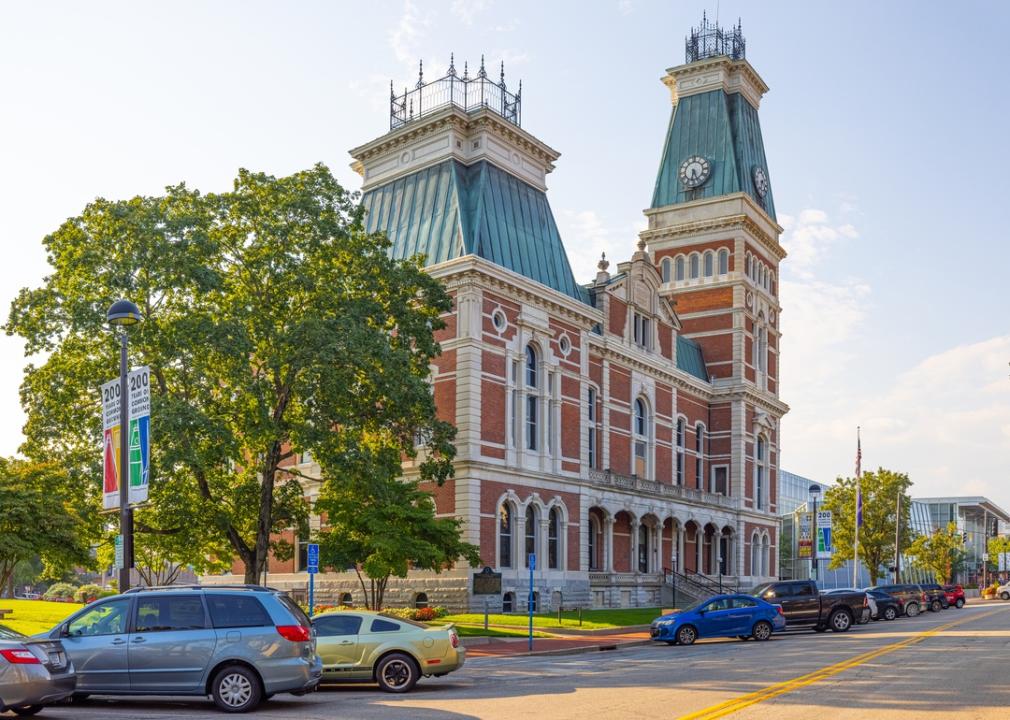 About 45 miles south of Indianapolis, Bartholomew County has relatively light traffic since it is spread out with lower population density than other suburban areas. The county provides real-time traffic maps that can alert residents to congested areas, which can also prevent further backups. 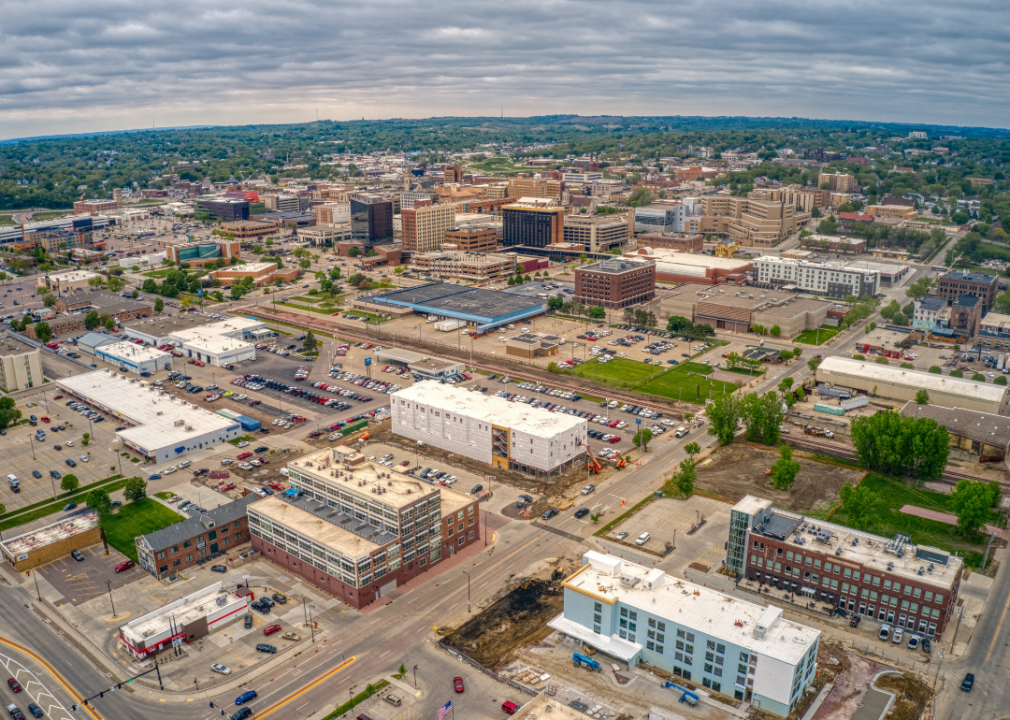 A guide for newcomers to Woodbury County warns those moving from the city that traveling within the county may simply be different. Some roads in the county are paved with gravel, which can make driving in inclement weather more difficult.

Iowa officials fought for 60 years to convert U.S. Highway 20—the longest highway in the country—from a two-lane to four-lane highway across the state. Woodbury County borders Nebraska and South Dakota, making it a crucial hub for cross-country travelers. 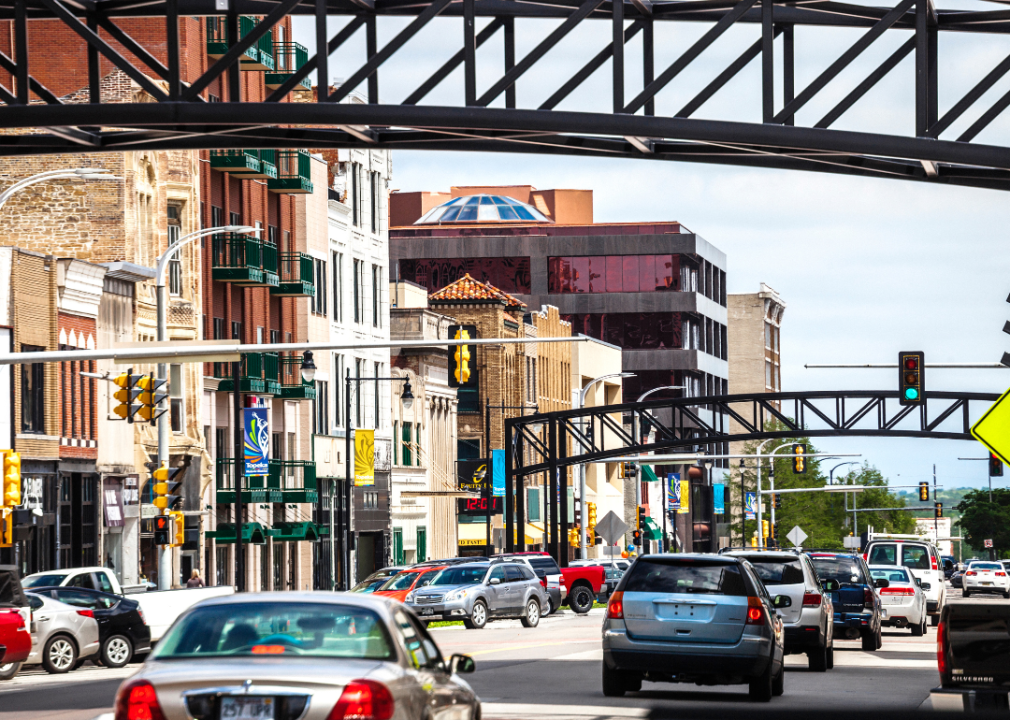 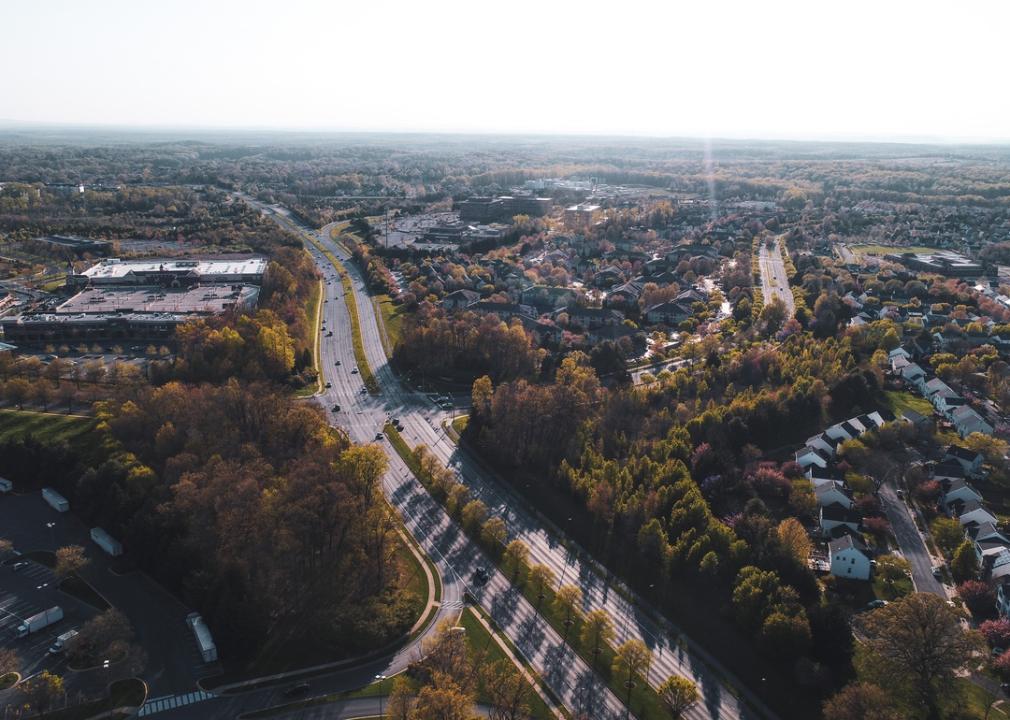 Montgomery County was in the news in May 2022 for some contentious transportation plans. The county is located near Washington D.C., which is known for its traffic congestion. The project at the heart of the battle includes adding new toll lanes to I-270 and a portion of the Capital Beltway to ease traffic for residents. 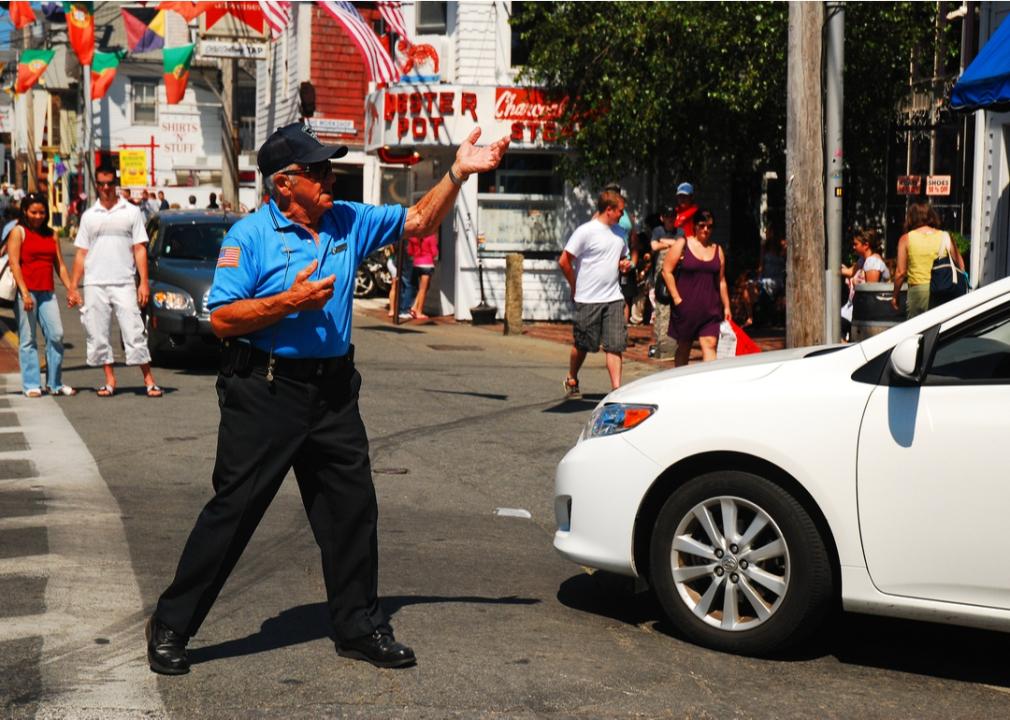 Traffic patterns in Barnstable County are not consistent year-round. The winter months are cold, but in the summer, tourists and second homeowners flood into the county, particularly Cape Cod. This means that summer traffic jams can complicate travel on routes that would be mostly clear in the winter. 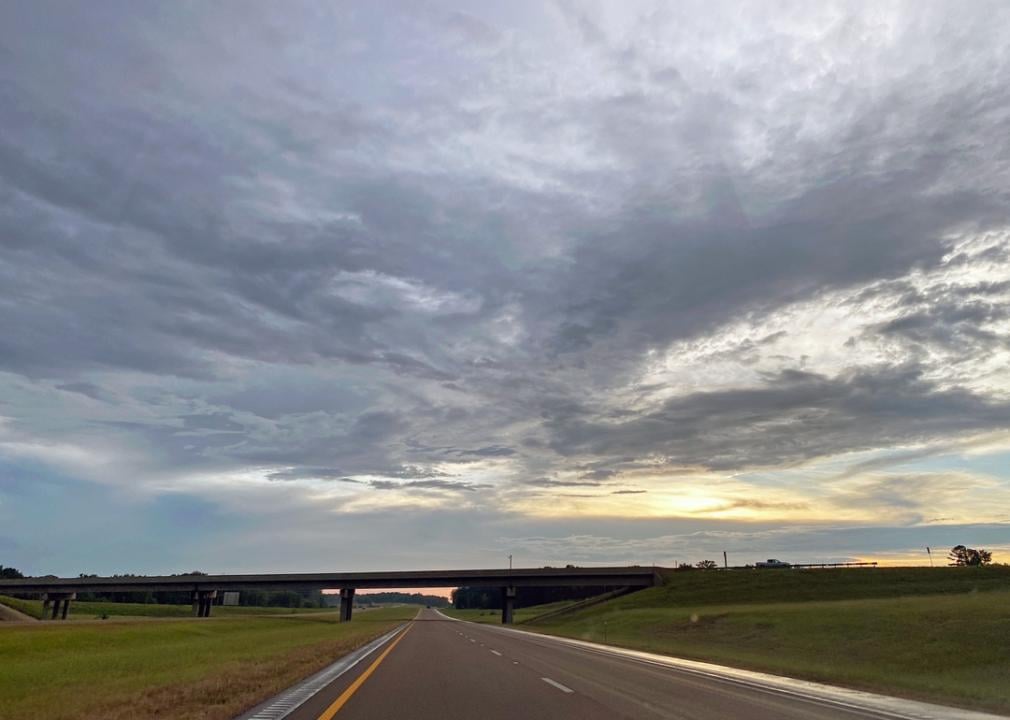 Traveling in DeSoto County, which borders Arkansas and Tennessee to the north, is influenced by an unusual caveat: Mississippi is one of only two states where county sheriffs are prohibited from monitoring drivers’ speeds. This means that motorists who want to reach their destinations even faster would have little to stop them from putting the pedal to the metal. 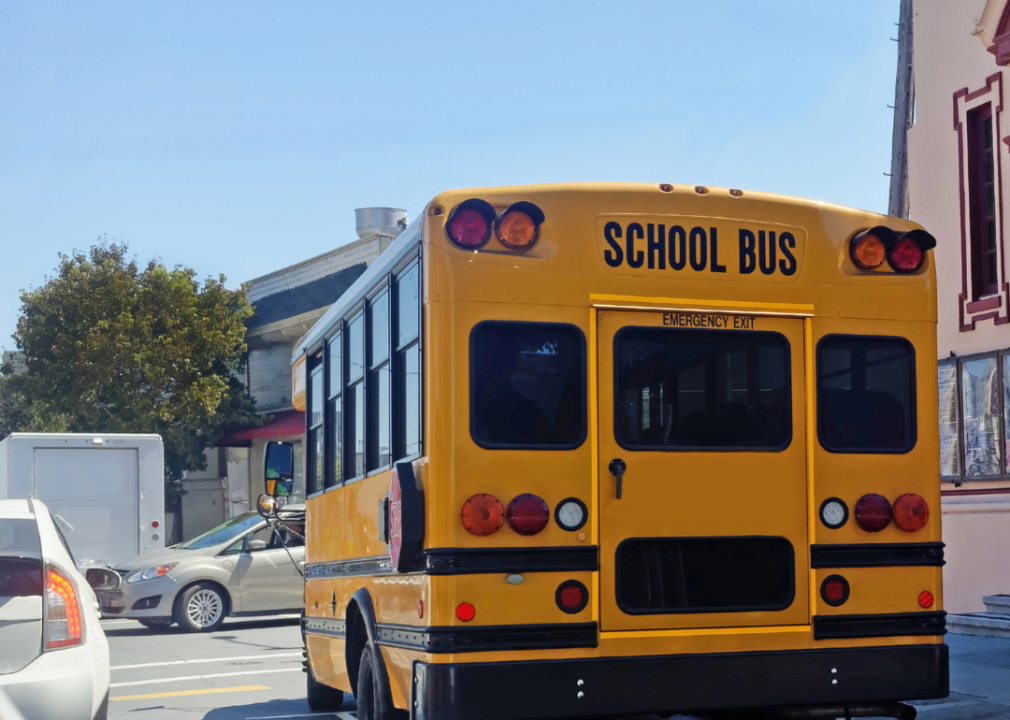 Oklahoma and Kansas border Newton County, Missouri to the west. The area’s traffic is largely influenced by the time school starts and ends. Despite its relatively small size and population, the county has 24 public schools, which means that those looking to avoid traffic should travel outside school pickup and drop-off times. 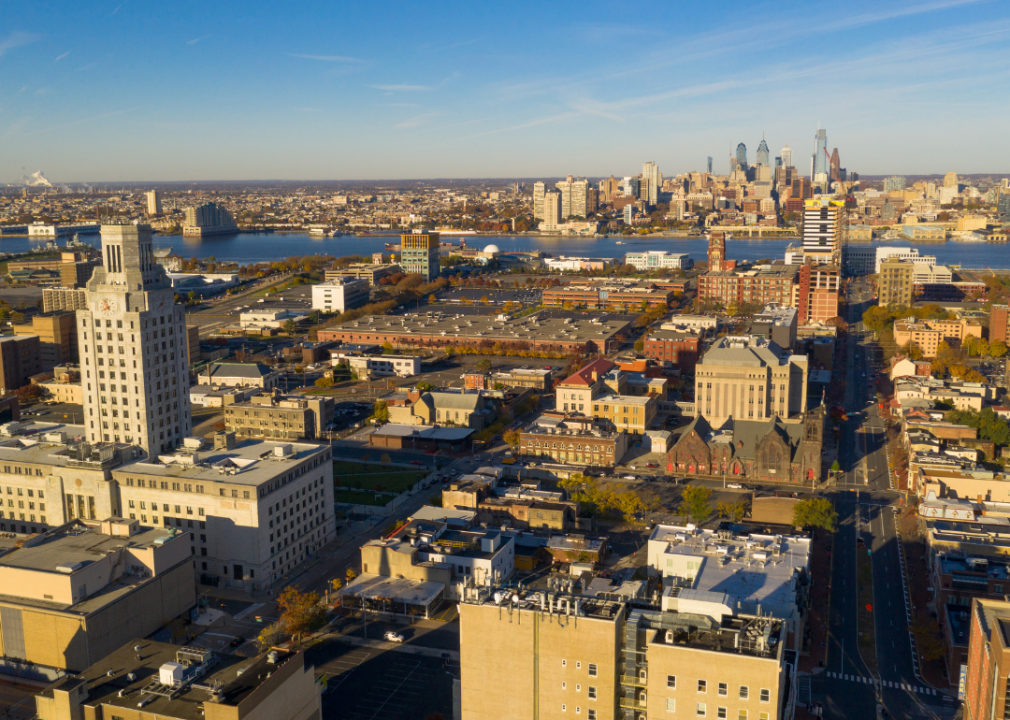 Because the Port of Camden serves as one of the largest ports in the mid-Atlantic region, Camden County hopes that the addition of a new road—for which plans were approved in May 2022—will help ease traffic. The road will specifically be designed to grant trucks access to the port, freeing up existing roads for motorists. 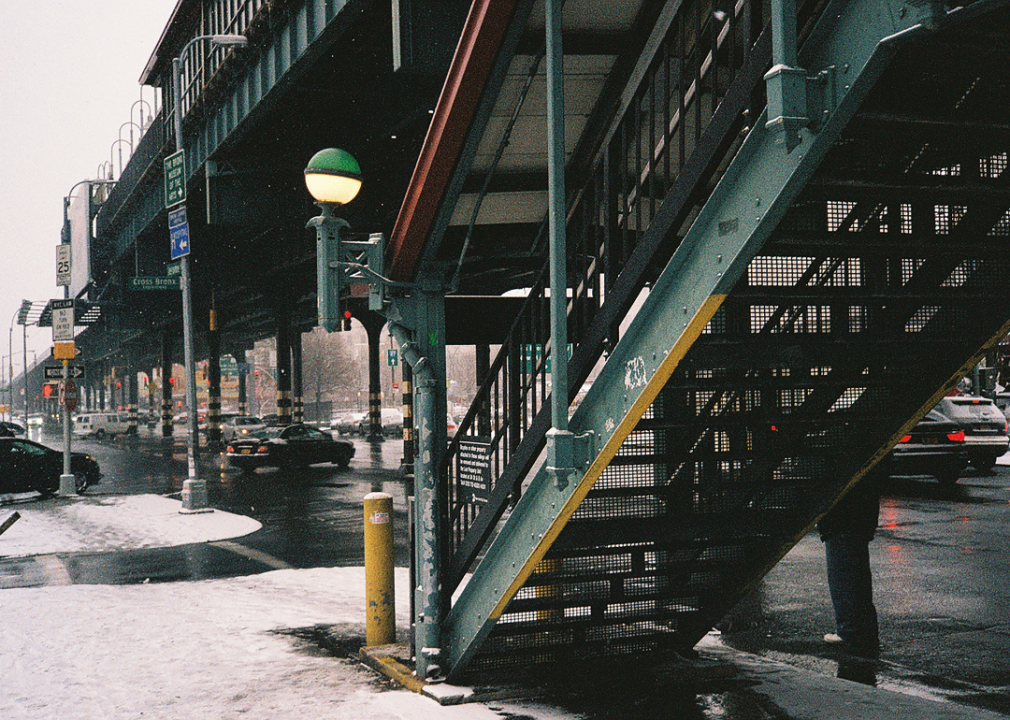 While the overall distance covered in a given day may be short, Bronx workers have the fifth-highest average one-way commute times among all U.S. counties (45.3 minutes), along with the second-highest rate of workers using public transportation to get to work. There are 70 subway stations as well as several bus routes in New York City’s northernmost borough, but Bronx residents often have to contend with subway unpredictability that can make planning reliable trips throughout the city particularly cumbersome. Subway delays can take a hidden toll on workers with less flexible start times, who may need to budget significant time each day to ensure they make it in on time.

Those who drive should watch their speed: New York City has installed new traffic cameras to tamp down on an increase in speeding and traffic deaths. 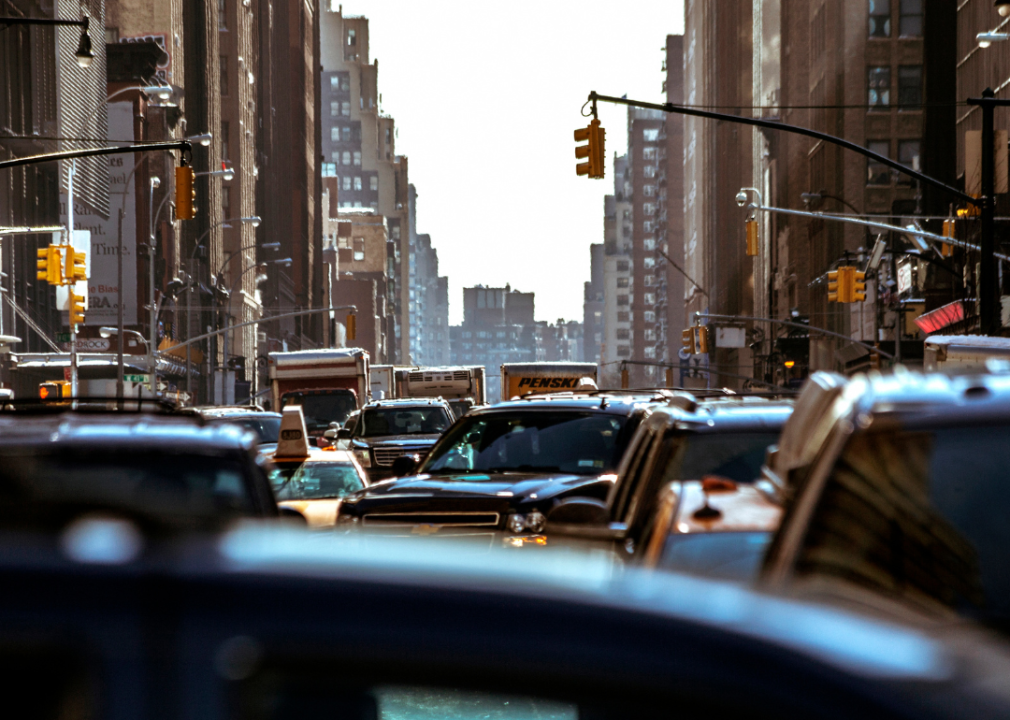 New York County, known as Manhattan, ranks right after the Bronx in terms of public transportation usage, with 54.9% of workers taking public transportation to work. The average one-way commute time is significantly shorter though, at 32.1 minutes. Nearly 20% of workers walk to their place of employment. Major events held in the city—particularly when they overlap—inevitably worsen the situation. 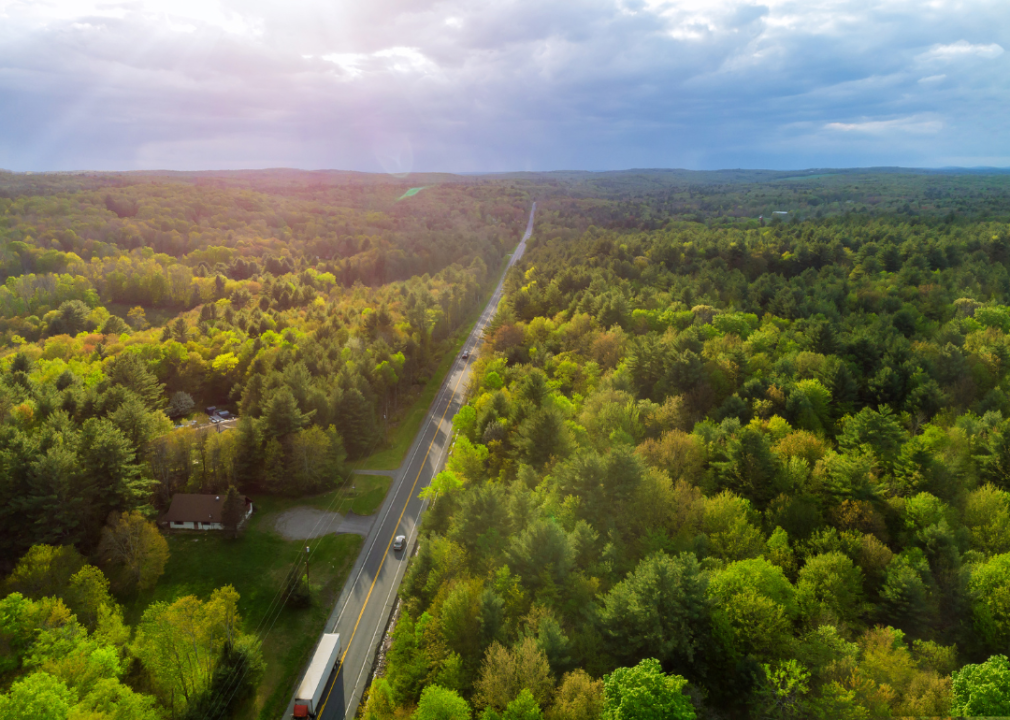 The Pennsylvania Department of Transportation recently made several improvements to transportation infrastructure in Monroe County. This includes filling several sections of highway and resetting 500 areas of barrier. These improvements are intended to ease traffic and help residents get to their destinations more efficiently. 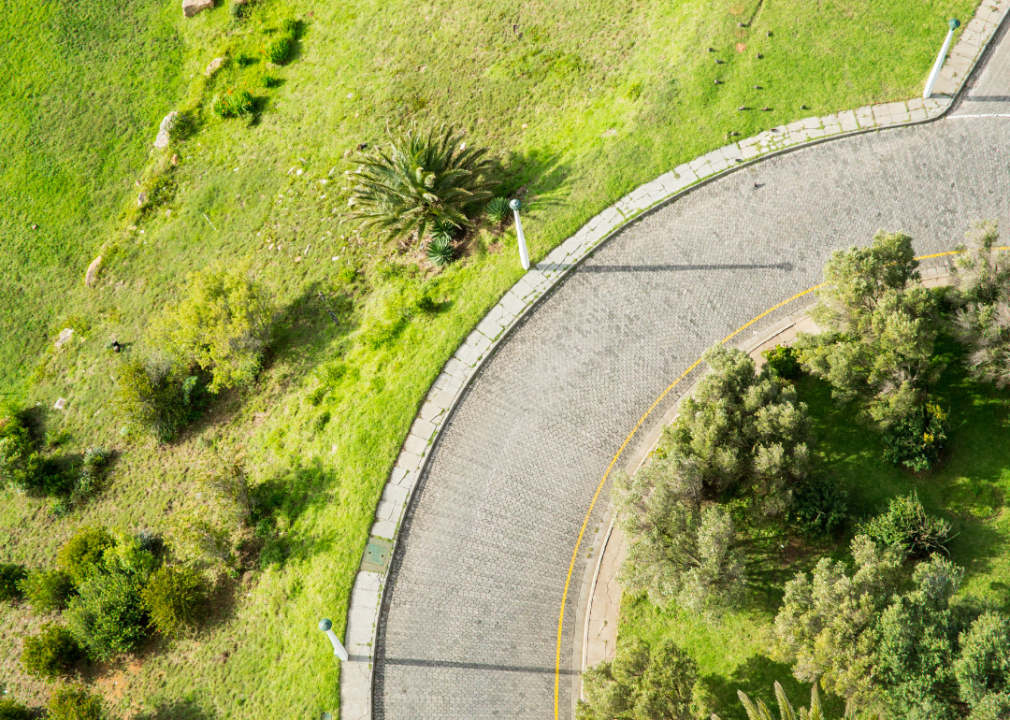 Despite the already low travel distances and times in Dorchester County, officials want to improve them further. They initiated an ambitious new program in which they aim to “calm” traffic. Such measures include installing roundabouts, traffic circles, and curb extensions to make pileups less likely. 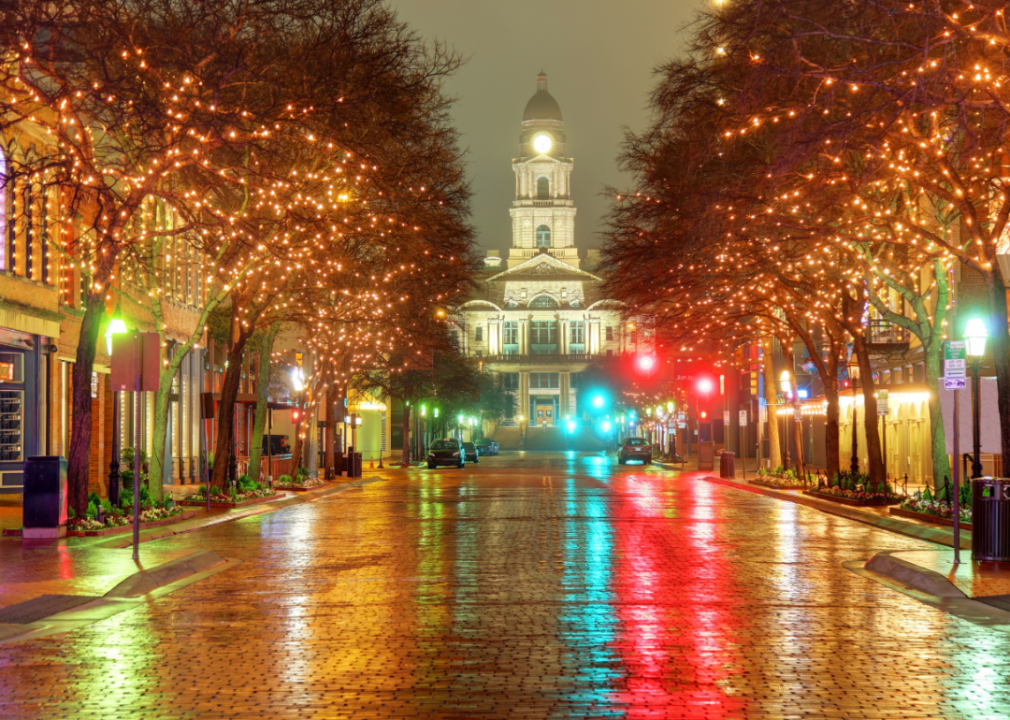 It doesn’t take much time on average to get anywhere in Tarrant County, where Fort Worth is the county seat. But those who want to speed anyway may soon have an easier time doing so. In May 2022, the county suspended arrests for traffic violations, since the Tarrant County Jail is at capacity. 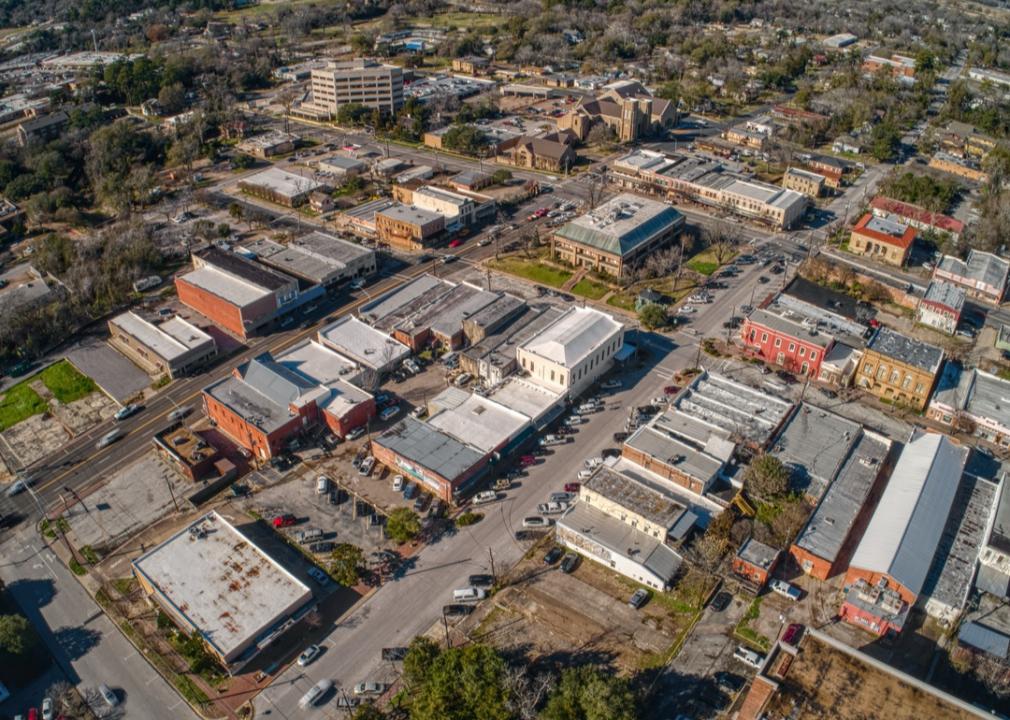 Walker County is near Houston, which comes with a fair bit of congestion. The I-45 Central Walker County Project hopes to change that by making repairs to a stretch of highway that was developed in the 1960s, when the transportation needs of the area were very different. The interstate serves as an important connector and hurricane evacuation route between Dallas and Houston.

This story originally appeared on Rate Genius and was produced and
distributed in partnership with Stacker Studio.