What are the odds? Two stray dogs hit jackpot when van filled with dog food rescues them from Mississippi highway 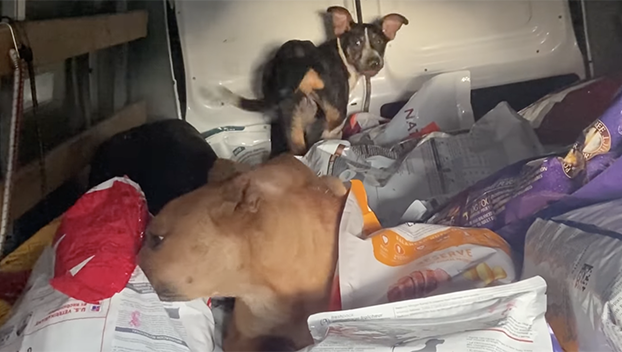 Two stray dogs must have thought they had died and gone to doggy heaven when a van filled with tons of dog food stopped to pick them up off the side of a busy Mississippi highway.

An animal rescue organization that helps transport stray dogs and cats from Mississippi to other parts of the country where they can be adopted posted about the two dogs and their heavenly start on their new journey to find a family and a forever home.

“What do you do if two starving dogs walk out in the road in front of your van as you are returning to the shelter with two pallets of donated dog food? You stop and invite the dogs to dinner, of course!”

A van for the organization called HoofBeats and PawPrints Rescue, based in Southwest Mississippi, was driving on US 84 near the Adams County Correctional Facility when it came upon the two dogs.

“This happened tonight on Hwy 84 near the prison – two pups were so hungry that they were trying to eat something they found in the road while high-speed traffic zoomed by. There were no kennels on our van when we stopped, only dog food,” the post said.

The dogs did not hesitate to come to their rescuers.

“The pups surprised us when they immediately came to us, then we surprised them by putting them in a van that held over a ton of donated dog food,” the post said. “Some of the bags even had holes – very convenient for snacking. We enjoyed watching their reaction – they probably had never dreamed there could be so much food anywhere in the world.”

The dog food was donated by Greater Good Charities and Big Sky CARES.

The group used the post to highlight the issue of strays in and around the Natchez area, near where the organization operates.

“We have had many calls recently about starving strays in our community. Often calls come from tourists who are shocked and upset about the situation when they encounter homeless pets,” the post said. “These two pups are safe at HPR now and they have full tummies tonight, but the situation is ongoing for many other homeless pets in our community. We do not have the capacity to take all area homeless strays at HPR and applaud the actions of other rescuers that we have heard from recently who have stepped up, helped pets that were in crisis situations and then been willing to foster until permanent solutions are found.”