Full military honors offered as soldier finally laid to rest. Mississippi veteran had been missing after attack on Pearl Harbor. 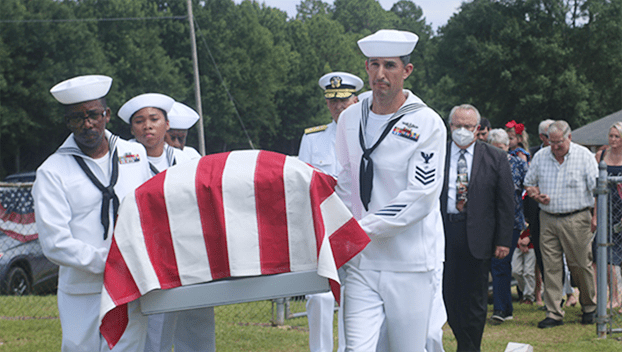 More than 40 Patriot Guard Riders lined the walkway leading to the Mount Pleasant Baptist Church in this small, rural community of Gloster on Saturday, July 9. With the motorcycle contingent were representatives of the Sons of the American Revolution, and a Naval contingent in dress whites. Inside the packed church were family, dignitaries and patriots.

All were there to welcome home the remains of local veteran John Russell Melton, seaman first class, who had been missing in action in the attack on Pearl Harbor Dec. 7, 1941. Melton was 23 when his ship the USS West Virginia was among the many ships sunk by the Japanese. His remains were unidentified until recently.

Jones said, “You see, for all of us here today, the name John Russell Melton should be more than just a remembered fact. It should be a cherished possession. He left to us a great hallmark … a great heritage. His life, though very brief … was one of service and one of loyalty and one of courage and one of devotion to country. He had a desire that he and others after him could live free.”

Among the dignitaries was U.S. Sen. Cindy Hyde-Smith. She said, “Thank you so much for being here today on such an incredible day… I join you in recognizing his great service and the ultimate sacrifice that he made.” State Reps. Angela Cockerham and Sam Mims also attended the service.

Murray Toney, of the Mississippi American Legion, read a proclamation from Gov. Tate Reeves. “I … hereby proclaim July the ninth, 2022, as a day of morning in remembrance of Seaman First Class John Russell Melton, and encourage all Mississippians to join me in this worthy observance.”

Seaman Melton’s niece Joyce Jones Mabry talked about how much her mother L. DeElla Melton Jones loved her brother. “Uncle Russell has always been my hero from a young age.” She added, “As she told me about him, I admired his dedication, his strength, and his sacrifice every day as I walked by this picture that was hanging on the wall in our home. His smile reassured me that there’s good in this world and that God has a master plan.”

A Navy contingent in dress whites carried the casket from the church to the burial place in the nearby church cemetery, where many of Seaman Melton’s family are interred. He was honored with a 21-gun salute and the playing of “Taps.” The unit was overseen by Rear Admiral Terry W. Eddinger, Navy deputy chief of chaplains.

The contingent folded the flag that was draped over Seaman Melton’s coffin and presented it to his niece Patsy Melton Jones. After the funeral, she said, “I’m just so full I can’t hardly talk. I’m at peace. I only wish some of my other siblings were able to see this. They would have been overjoyed.”