He was recently named strongest man in Mississippi. He now has his sights set on a much bigger title. 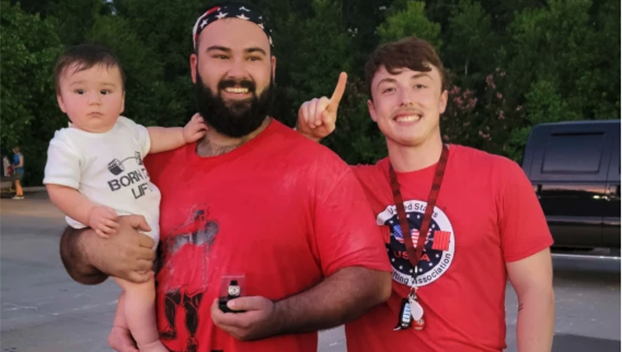 From left, Jason Evans with his first place strongman ring and his trainer Cooper Bean after Evans won the 2022 Novist in 231lbs and over heavy weight division in the 2022 Mississippi Strongest Man Competition in Hattiesburg Mississippi.

Twenty-six-year-old Jason Evans took first place in the Novist 231lbs heavyweight competition, earning him the title of the strongest man in Mississippi. Evans was born and raised in Picayune where he attended Pearl River Central High School.

Evens has trained for the 2022 Mississippi Strongest Man Competition for over a year and a half. This was Evans’ first ever competition.

“Never really competed in anything, never did any sports, (this was) kind of a fun thing for me to get into,” he said. “I’ve always known I was strong, I used to lift on and off through high school and college, but I didn’t really go into powerlifting or strongman. Always kind of did body-building stuff, but I knew I was a little bit stronger than most people.”

Evans put a hold on lifting around four years ago, but recently he gained more free time and decided to train for the strongman competitions.

“I wanted to try some strongman stuff and I just got addicted to it,” he said.

What inspired him to hit the gym again was seeing one of his friends getting stronger.

“I was like I can’t have him being stronger than me,” Evans said with a laugh.

Once his friend stopped training, Evans’ strength took off.

The 2022 Mississippi Strongest Man Competition was held on July 9, at Revolution Fitness in Hattiesburg. The event hosted two novice groups, 231lbs and up, 230lbs and below and an open division for veteran competitors.

“I’m really not a nervous person when it comes to these events. I went into it confidently, I’ve been training for a year and a half, I should be able to do something good,” he said. “I wasn’t really trying to go for a win I was just kind of putting my heart into it and see where it got me.”

Each division had five events. Evans’ event started in the circus dumbbell, where he tied for first. Next, in the deadlift event, he placed third. Then in the sandbag toss, Evans placed first, beating his next competitor by nine feet. The fourth event was a sandbag carry into a farmer’s carry. He placed second in that event. The last event was a natural stone to the shoulder where he placed second. He won in his division through his overall performance.

Evans said the experience was phenomenal and the atmosphere was none other than fun and competitive.

“Different competitors were cheering you on, the guy below me who was trying to get my spot was cheering me on… so it was a lot of fun, it was competitive but a fun competitive,” Evans said.

“This event opened my eyes to so much more. I’m trying to move forward with making a name for Picayune, Mississippi. I just want to bring some light into the town that we got a lot of real hard-core athletes here. It makes me drive even more to go and win more events,” he said.

Already clinching the strongest man in Mississippi title, Evans will try his strength in Gulf Shores, Alabama in that strongest man event on Aug. 13.

“I’ve been training hard, my event’s one month away, and I just got to train even harder,” said Evans.

This time around will be tougher for Evans as he’ll compete in the open division with veteran competitors.

To prepare for these events, Evans has been training under Cooper Bean, a locally known trainer at The Gym at Picayune. Training with Bean has helped Evans reach his full potential and bring out his confidence.

“I’ve been training by myself for a long while, about two months ago I wasn’t seeing any progress in my lifts, and that was a big concern for me,” said Evans

Evans reached out to Bean, who accepted. Within two months Evans said his confidence level skyrocketed and he gained fundamental lifts.

“He did awesomely,” said Evans.

Evan plans to put Picayune on the map as the city with not just the greatest athletes but one of the strongest men in the US.