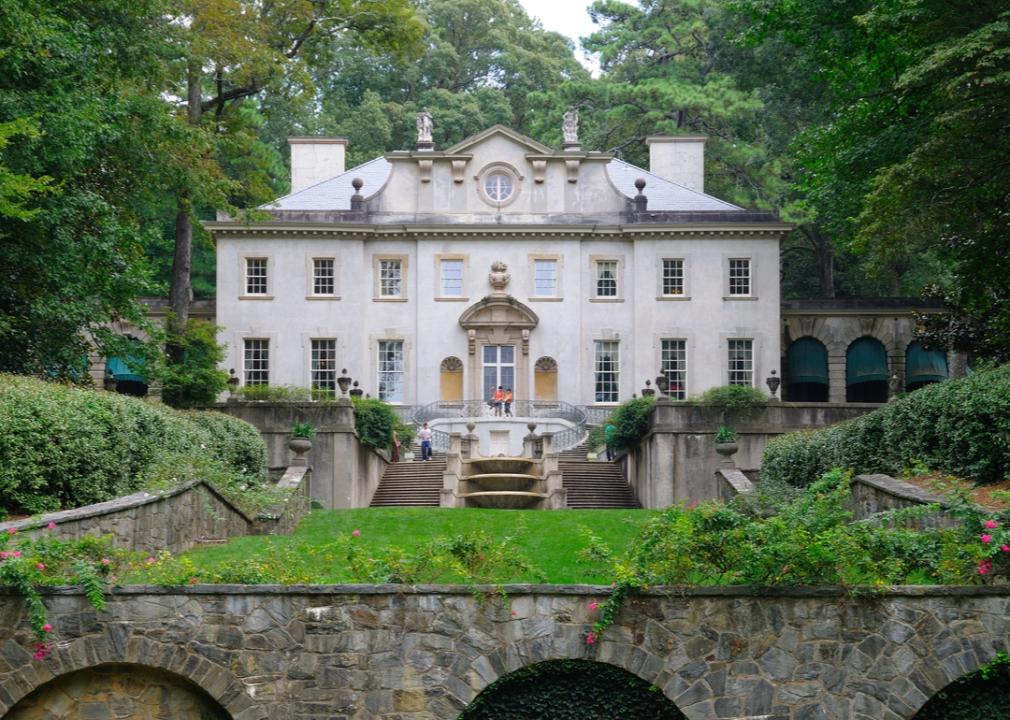 When people think of touring memorable filming locations, their minds immediately go to New York and Los Angeles, two powerhouse cities that have long stood as the hub of culture and film. But there’s another booming movie metropolis destined to join that vanguard: Atlanta.

Imbued with history and culture and abound with year-round sunshine, sprawling landscapes, and lush greenery, filmmakers far and wide have cultivated the Big Peach for some of the biggest blockbusters in cinema, having functioned as the go-to locale for more than 250 films—and many more projects in counting. To that end, Giggster researched Atlanta filming locations and highlighted 10 places (addresses included) across the city from famous movies you can visit on a cinematic pilgrimage.

While a large share of the filmmaking done in Atlanta has taken place in the 21st century and on working studio lots that can’t be visited, there are still some notable locations you can tour right now. President Snow’s towering mansion as seen in the “Hunger Games” films, the newly developed fairgrounds that once acted as a backdrop in “Smokey and the Bandit,” and the Beverly Hills mansion where the survivors of “Zombieland” sheltered from the undead are among the countless sites waiting to be explored.

Read on to discover 10 significant filming locations you can tour in Atlanta today. 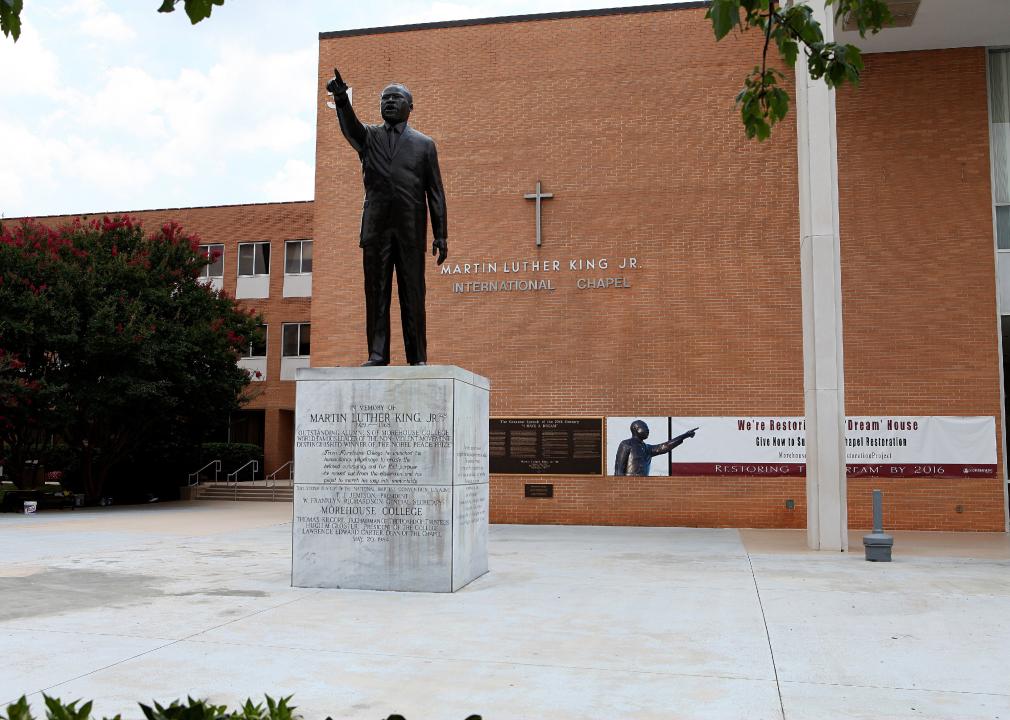 Based on director Spike Lee’s own experience as a Morehouse student, “School Daze” is an indelible example of Black cinema. Set against the backdrop of Morehouse College, the film utilizes lighting to frame the fictional Mission College like it’s a character in the film. The surrounding grounds look lush and inviting, but despite this, the film focuses on the conflict between the characters and within themselves. Despite the film’s enduring legacy, Lee was actually asked by Morehouse College officials to resume filming elsewhere, as they feared the film would shine a negative light on the historically Black school. 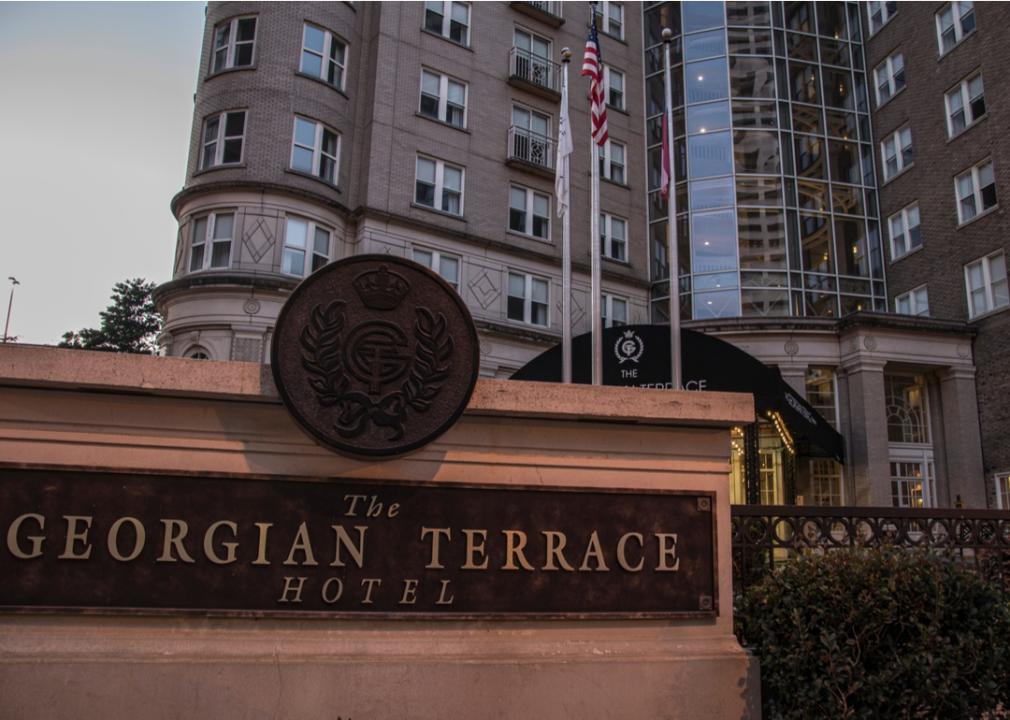 Multiple movies at the Georgian Terrace

Made of brick and marble and adorned with floor-to-ceiling windows and crystal chandeliers, there is no place like the Georgian Terrace. Used as a filming location for such movies as “The Change-Up,” “Anchorman 2: The Legend Continues,” and “Identity Theft,” among others, this grand hotel, built in 1911, has seen its fair share of famous guests over the years. It famously hosted a gala premiere party in 1939 to celebrate the unveiling of “Gone with the Wind,” an event that essentially put the hotel on the map. The venue also has a storied history of attracting well-known visitors, including F. Scott Fitzgerald, former President Calvin Coolidge, and Walt Disney. 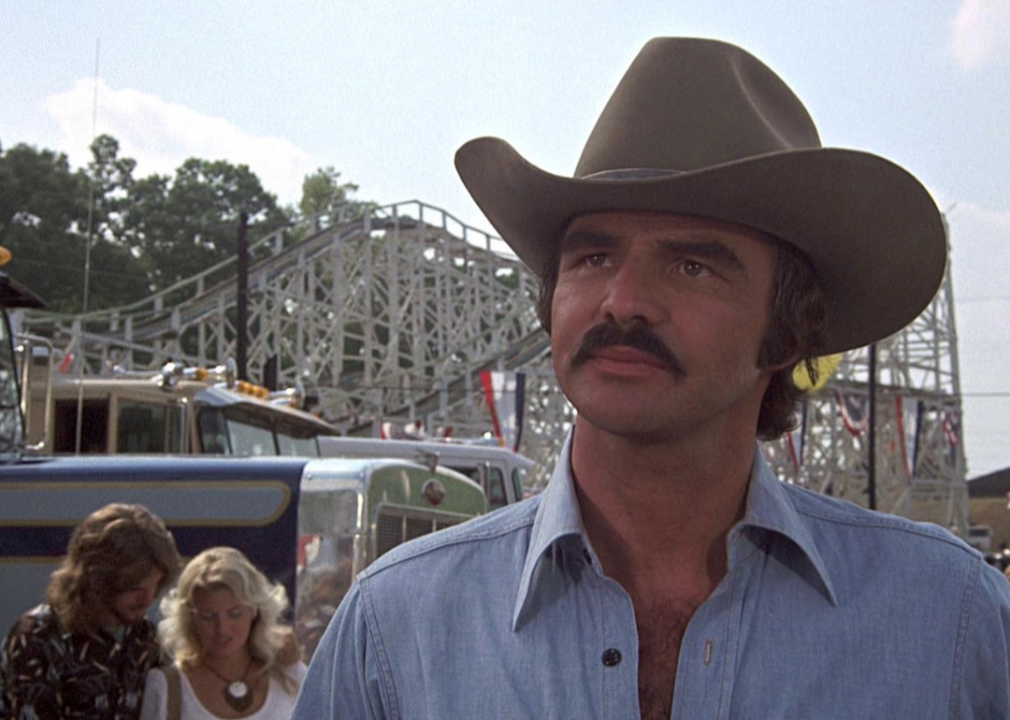 The Truck Rodeo in ‘Smokey and the Bandit’

One of the most noteworthy movies to be filmed in Atlanta was the 1977 hit “Smokey and the Bandit.” The backdrop to some of the film’s centerpieces is the Lakewood Fairgrounds, originally built in 1916. After being a popular location for Atlanta’s Southwest for decades, the fairgrounds shut down for many years. Now, the fairgrounds have been transformed into EU Screen Gems Studios Atlanta, which has seen the likes of Netflix’s “Stranger Things” working out of the studio lot. It may not have the same charm that was found in “Smokey and the Bandit,” but the new studio has at least refurbished most of the building’s glorious mission revival architecture style. 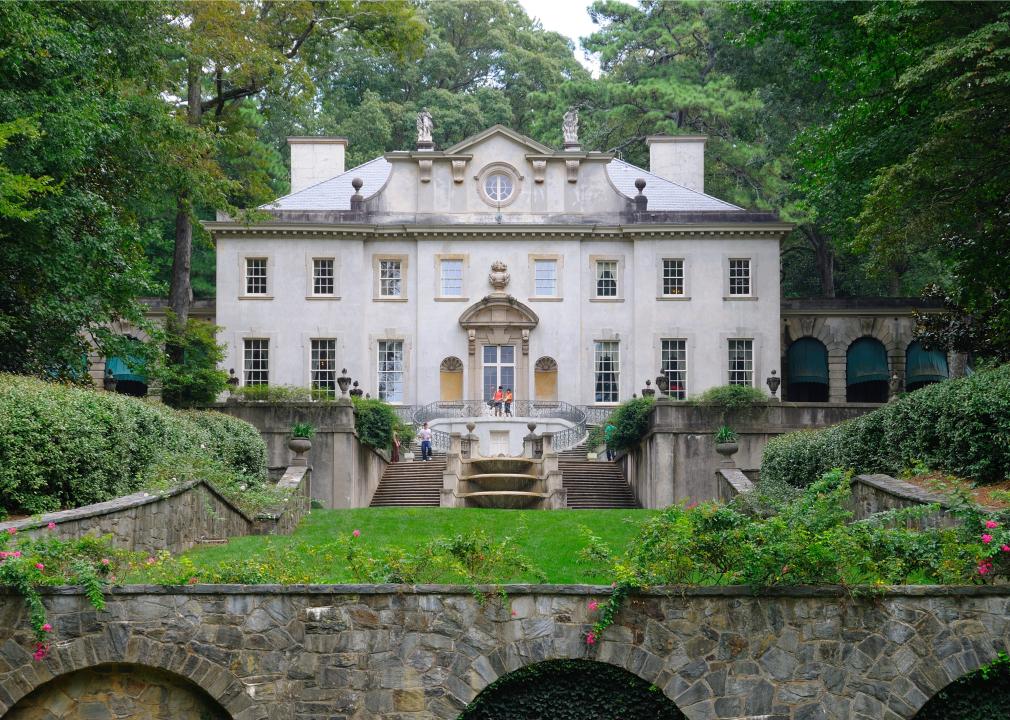 Featured prominently in “The Hunger Games: Catching Fire” and “Mockingjay – Part 2” as the mansion of villain President Snow, the Edward Inman “Swan” House was designed by architect Philip Trammel Shutze in 1928. In the “Hunger Games” franchise, the Swan House is almost as imposing as the character who inhabits it. Its daunting staircase leading up to the house makes the location look bigger than it is, almost like Snow himself. The Swan House was purchased in 1966 by the Atlanta Historical Society and restored to its original state, allowing the mansion to emulate the look and feel of the 1920s. 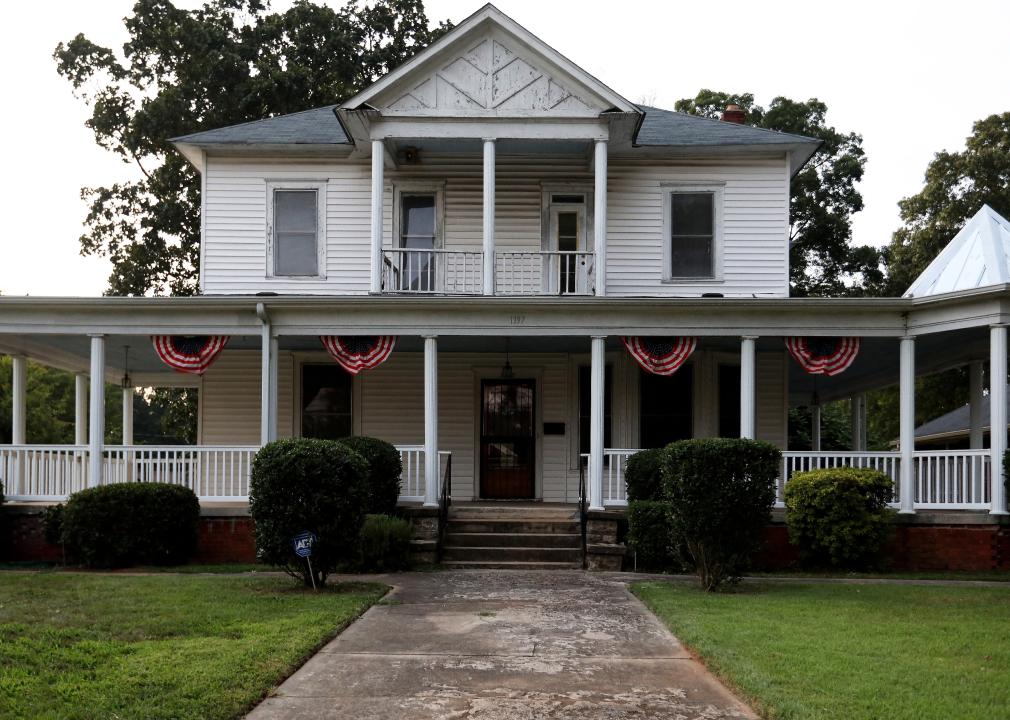 Madea’s house in ‘Diary of a Mad Black Woman’

If you’re a fan of Tyler Perry, you’ll recognize 1197 Avon Ave SW right away. Home to the seminal character Madea, this remarkable house is located in the heart of Atlanta. Madea’s house is almost as big of a character as she is, so it’s unsurprising that her home has become just as notable. Although it is one of the city’s historical landmarks that doesn’t allow tours inside, Atlanta Movie Tours stops in front of the house as part of its “Heritage Tour” and even lets tourists take photos out front. It looks relatively the same since Madea was first introduced to us in 1999, with its green accents and wrap-around porch visible from the street. 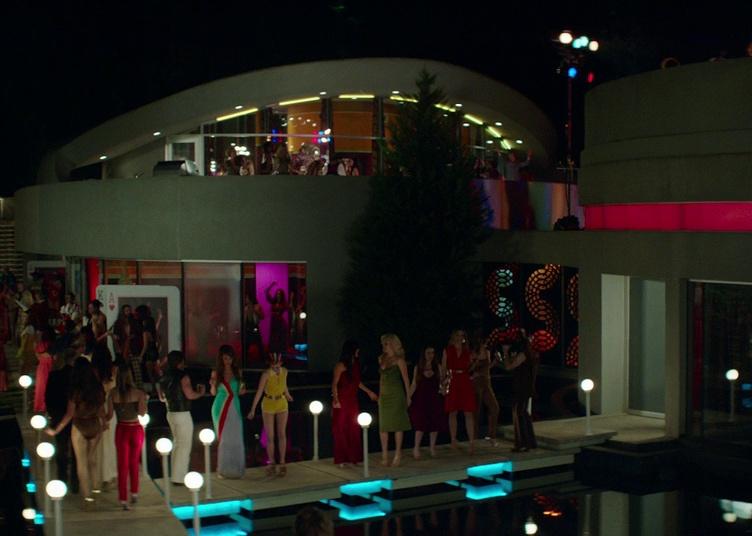 The modern party mansion in ‘The Nice Guys’

This futuristic building is featured in the 2016 film “The Nice Guys,” as the home of an adult film star whose death the main characters are investigating. In reality, 5335 Northside Drive NW belongs to record producer Dallas Austin, who has been known to rent out his mansion for $25,000 per month, with artists like Justin Bieber and Lenny Kravitz as previous guests. The 5,578 square-foot house was built in 2003 by architect Michael Czyzs and has four bedrooms and four bathrooms, but its biggest draw is definitely its infinity pool, which is visible from inside the house. 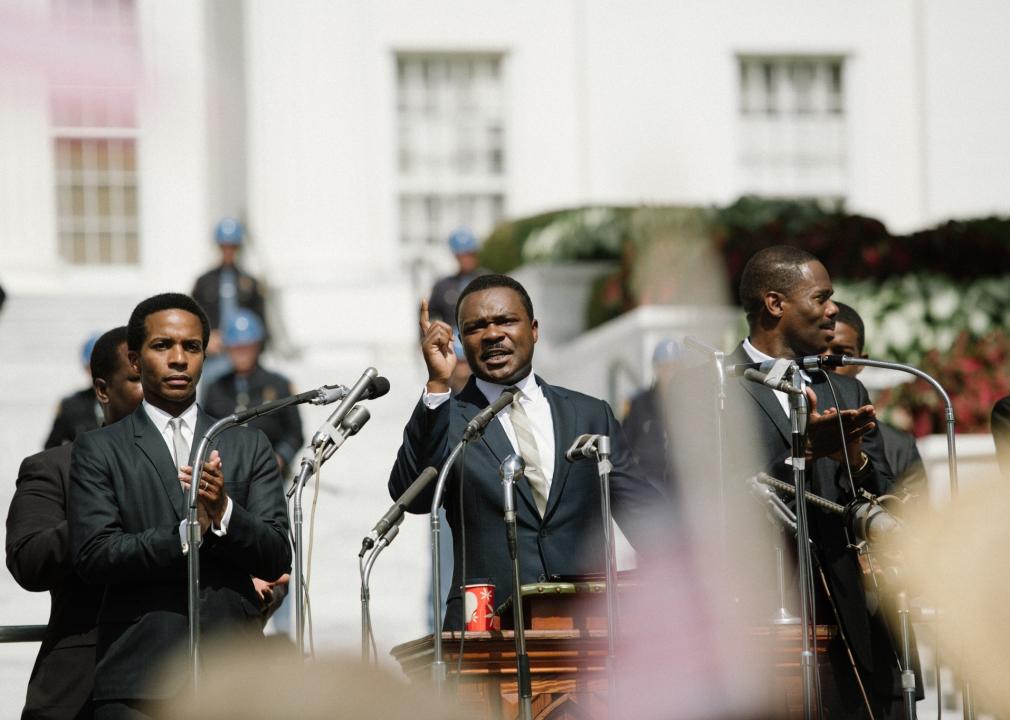 Where MLK Jr. accepts the Nobel Peace Prize in ‘Selma’

Originally built as a post office in 1910, the Marietta Cobb Museum of Art isn’t actually where Martin Luther King Jr. accepted his Nobel Peace Prize. He actually accepted it in Oslo, Norway, but that doesn’t deter from the history or meaning of the building. Although it didn’t officially become an art museum in 1990, it’s currently the “only Metropolitan-Atlanta fine arts museum focusing on American Art.” The Marietta Cobb Museum of Art is also a nonprofit organization, whose goal is to “build community through art.” The building fits perfectly in the period in which “Selma” takes place, with the giant building’s architecture—namely the frontal white pillars—transporting you back to the civil rights struggle of the 1960s. 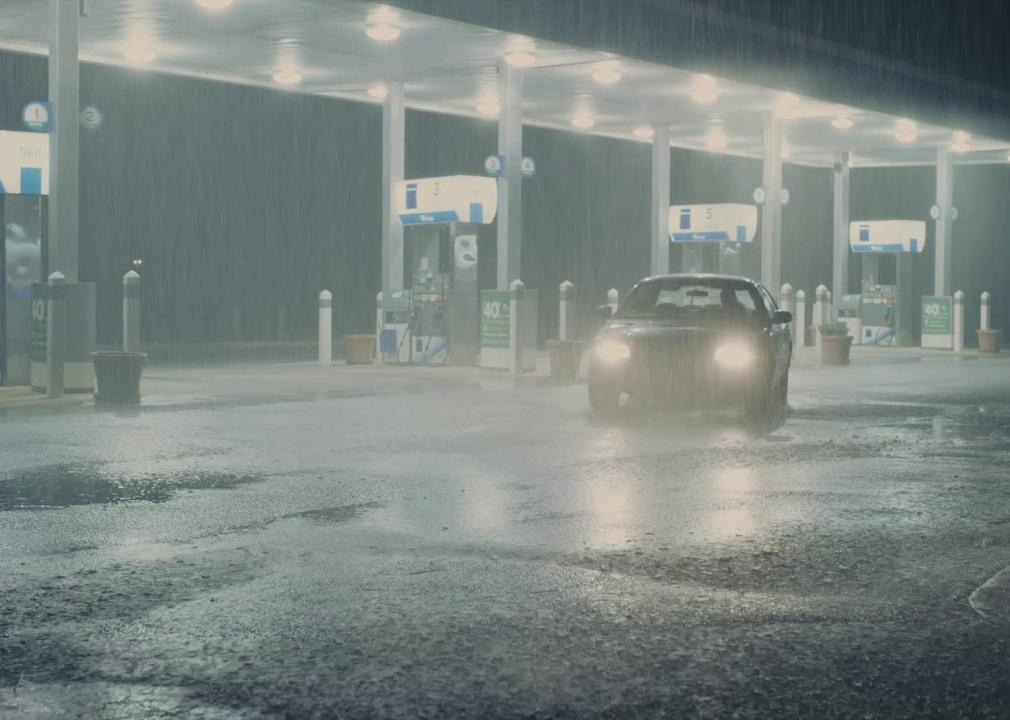 The gas station in the rain from ‘Prisoners’

While he’s now known as a master of science fiction, director Denis Villeneuve began his Hollywood career with more intense films. The Jake Gyllenhaal and Hugh Jackman starrer “Prisoners” is one such project, which employs this gas station as the location where Gyllenhaal’s detective character orders his men to haul off a suspected murderer in the pouring rain. In the film, the gas station is bathed in darkness; the only light sources are from overhead street lights and police cars shining blue and red. While the location won’t look the same in real life, it will feel similar, especially at night. Plus, the neighboring woods are sure to intensify the real-life scare factor. 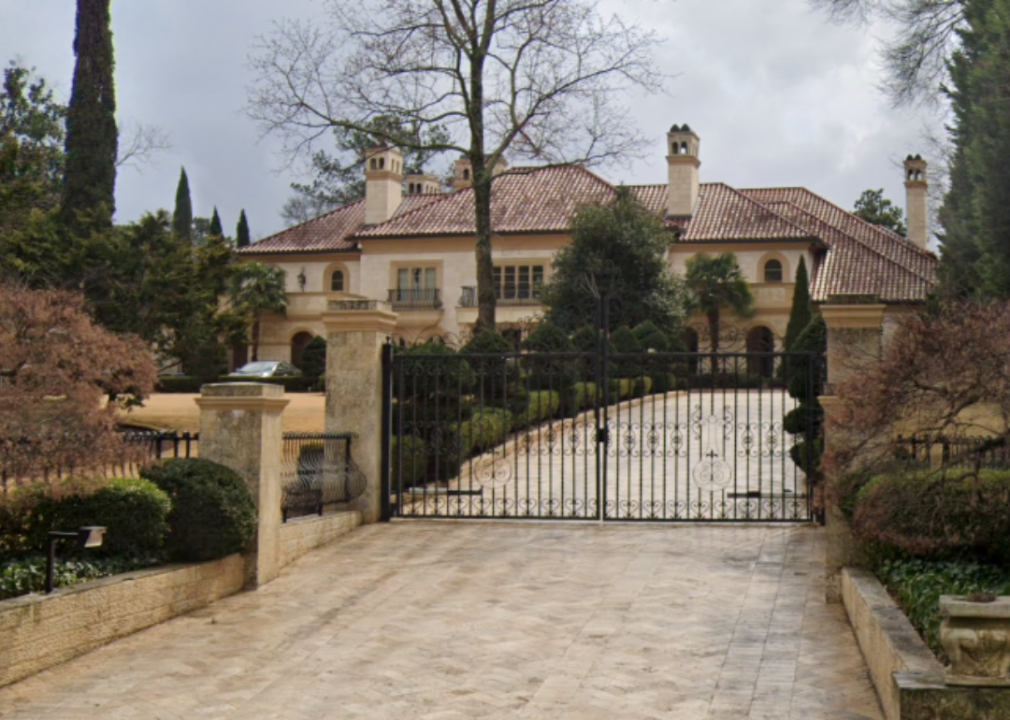 One of the most memorable elements of “Zombieland” is Bill Murray, along with his mansion. In “Zombieland,” the main characters travel to Beverly Hills and take refuge in the estate, but in reality, it resides in Atlanta. This also isn’t Murray’s actual home. In fact, the mansion wasn’t built until 2008, a year before the movie was released. Red carpeting drapes the staircases, and chandeliers hang from the ceilings in the film, providing the characters a luxurious hideaway. The impressive theater room remains untouched to this day, decked out with lush red chairs and carpet. The mansion still stands in all its glory, and its exteriors, which weren’t truly highlighted in the film, are almost more impressive than what’s inside. 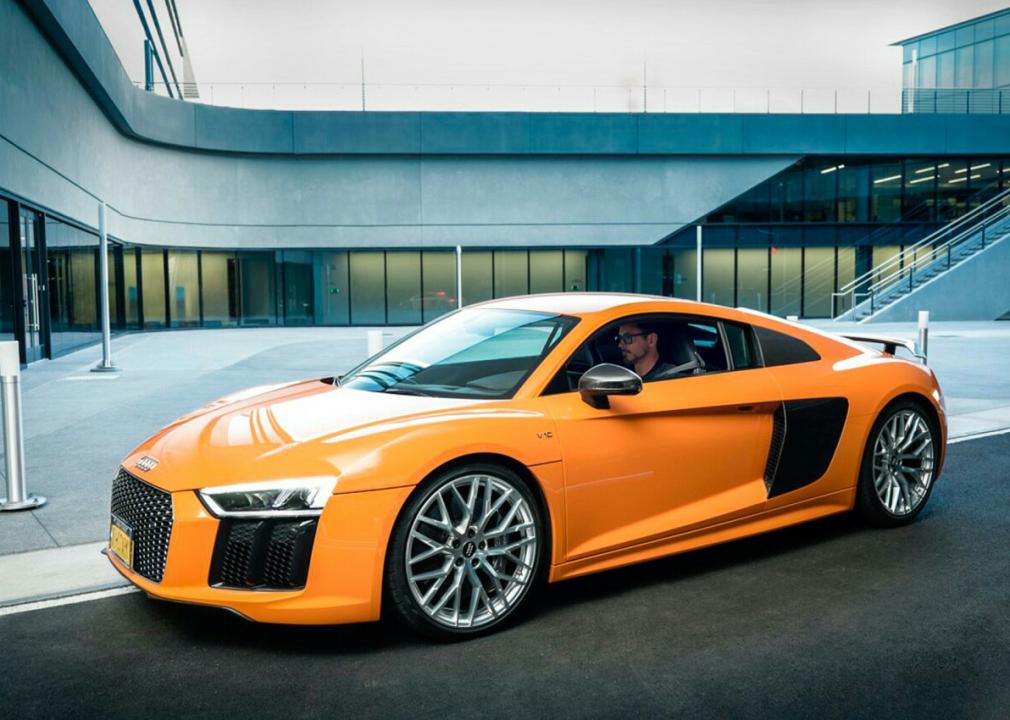 The Avengers headquarters in the MCU

First appearing in “Captain America: Civil War,” the Porsche Experience Center has appeared in many Marvel films as the location for the Avengers headquarters. The building’s stunning glass windows and dome-like structure can’t be missed, with the Porsche logo having been swapped out for a giant typographic capital “A” in the films. There’s no doubt that this has become a popular Atlanta tourist attraction, with the Marvel Cinematic Universe being bigger than ever. Fans are in luck, as there are opportunities to dine at the facility and even stay in accommodations that overlook the amazing architecture of the Porsche Experience Center.