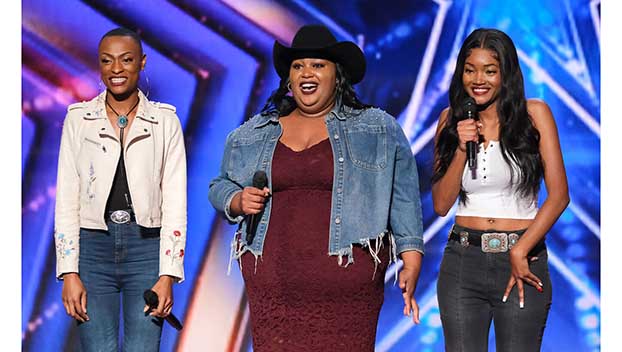 A Mississippi singing trio got the attention of all three America’s Got Talent judges Tuesday and simultaneously earned kudos from two of country music’s legendary lady singers.

Chapel Hart, a trio from Poplarvile, Mississippi, advanced to the live rounds of America’s Got Talent after judges awarded the group the golden buzzer award, only the second such given in the show’s history.

The group, consisting of sisters Danica and Devyn Hart along with their cousin Trea Swindle, dazzled the audience with their original song, “You Can Have Him, Jolene,” which the group says is a response to Dolly Parton’s 1970s hit “Jolene.”

“We’ve always been country music fans, and Dolly is by far our favorite,” Danica said. “We were so inspired by the song ‘Jolene;’ we just love the storyline. And we figured, though, from 1973 to 2022, we could not still be fighting over the same man, so we decided to tell her, ‘You can just have him, Jolene.'”

“What a fun new take on my song, Chapel Hart!” she wrote on social media. “(Dolly’s husband) Carl’s birthday is today so I think I’ll hang on to him, and I’m not notifying Jolene that today is his birthday.”

“I love it, ladies,” she wrote on social media. “Now I’m wondering what you might be able to do with one of my songs!”

“Trust me, I needed you today. I mean, that was fantastic. I love you, and I love the choreography going on around you. It was just brilliant … You’ve just got to break down that door, and you may have just broken down that door with that performance, trust me,” judge Simon Cowell said.