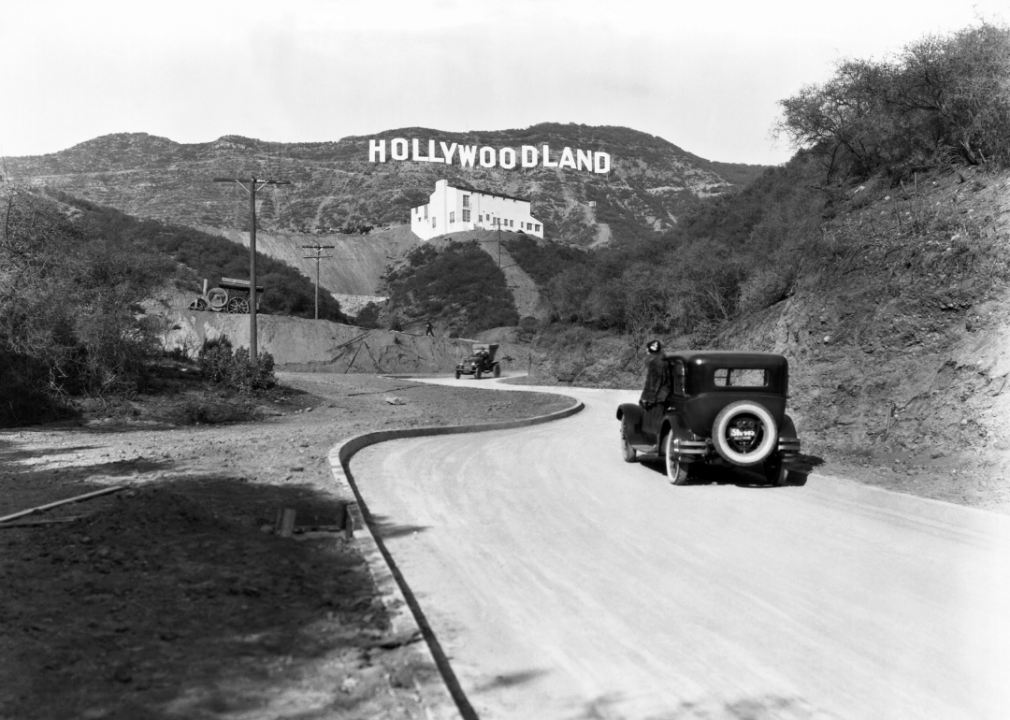 The 1920s marked a huge period of growth for the city of Los Angeles. At the start of the decade, just over half a million people called the sunny, Southern California town home. By 1930, that number had jumped to just over 1.2 million. Gone were the days of LA as a farming town, changed forever by the arrival of the film, oil, and aviation industries.

Without a doubt, one of the most famous industries to stem from LA’s growth was the motion picture business. While filmmakers first began migrating to SoCal in the late 1910s, the ’20s brought the big studios, major stars, and all the money. If not for studio heads’ desire to escape the Northeast’s temperamental weather and patent restrictions, LA certainly wouldn’t be the city we know it to be today.

With that massive population growth came a number of other changes—the suburban sprawl, a reliance on automobiles and the freeways constructed to get those automobiles around the spread-out city, and a burgeoning desire for luxury and leisure. It can be hard to put into words just how unique LA was in the 1920s. For that reason, Giggster combed historical archives to create a collection of pictures that best demonstrate what life was like in the City of Angels during the decade.

From snaps of old Hollywood to glimpses of everyday life, these photos perfectly exemplify the history of the nation’s second-largest city. 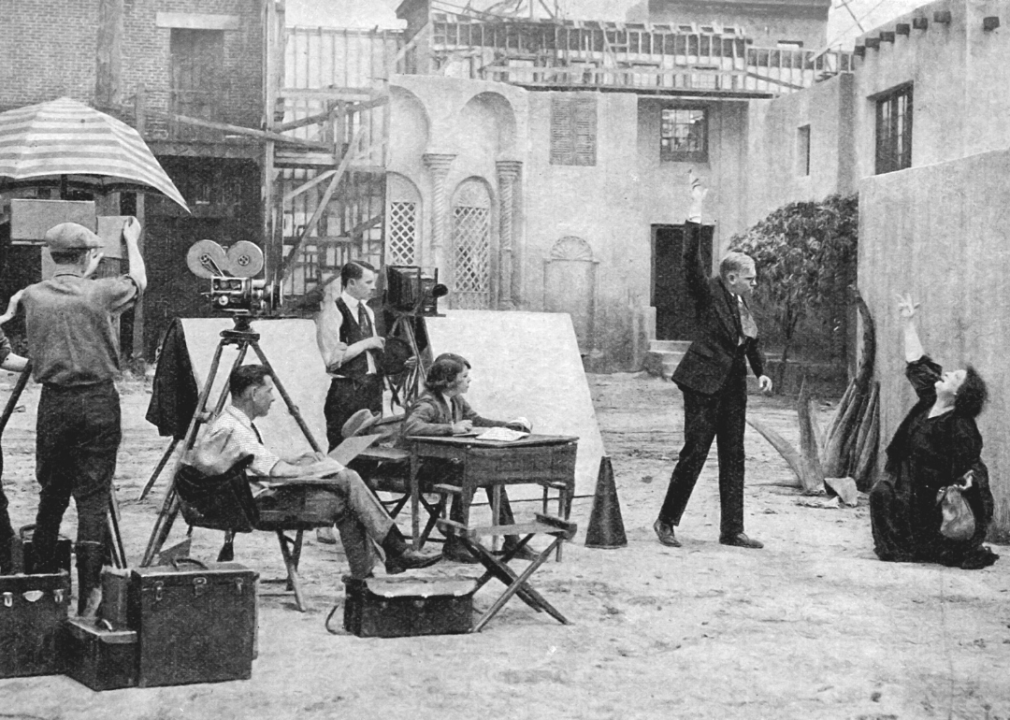 The birth of the film industry

In the mid-1910s, many movie makers began heading to Hollywood to shoot, hoping to avoid the fees they were charged when shooting on the East Coast, not to mention taking advantage of Southern California’s year-round temperate weather. By the 1920s, nearly every major studio, and many independent filmmakers, were doing the bulk of their work in the LA area. 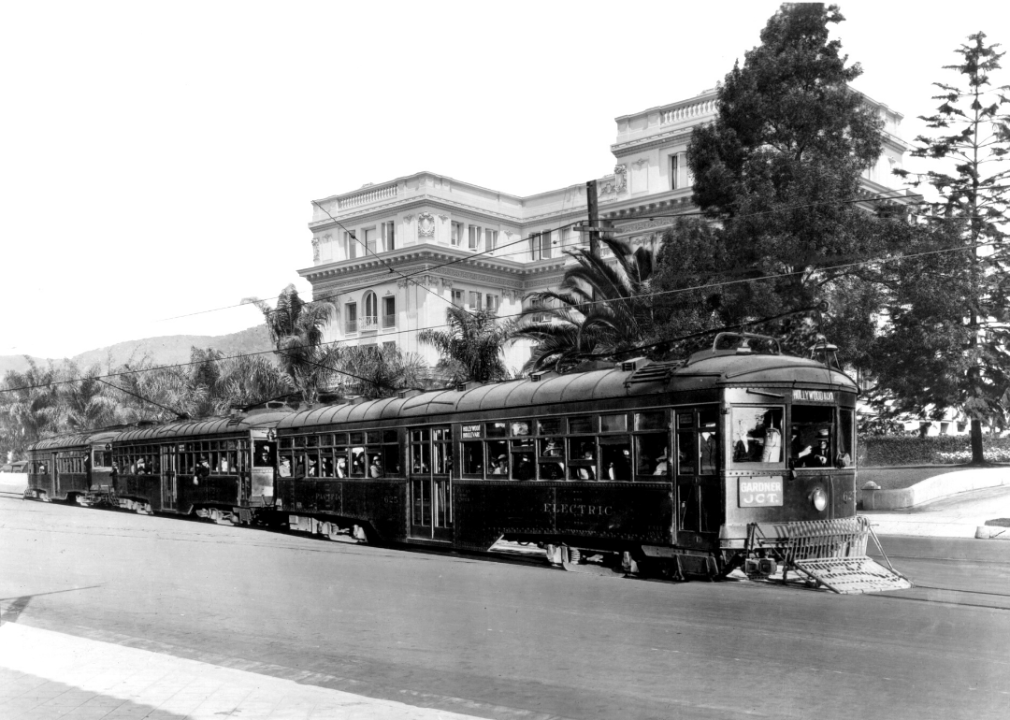 In the 1920s, the Pacific Electric railway system was the largest interurban electric railway system in the world. With more than 1,000 miles of railways, the public transit system connected cities in the counties of LA, Orange, San Bernardino, and Riverside. Here, one of the famous red cars carries commuters along Hollywood Boulevard. 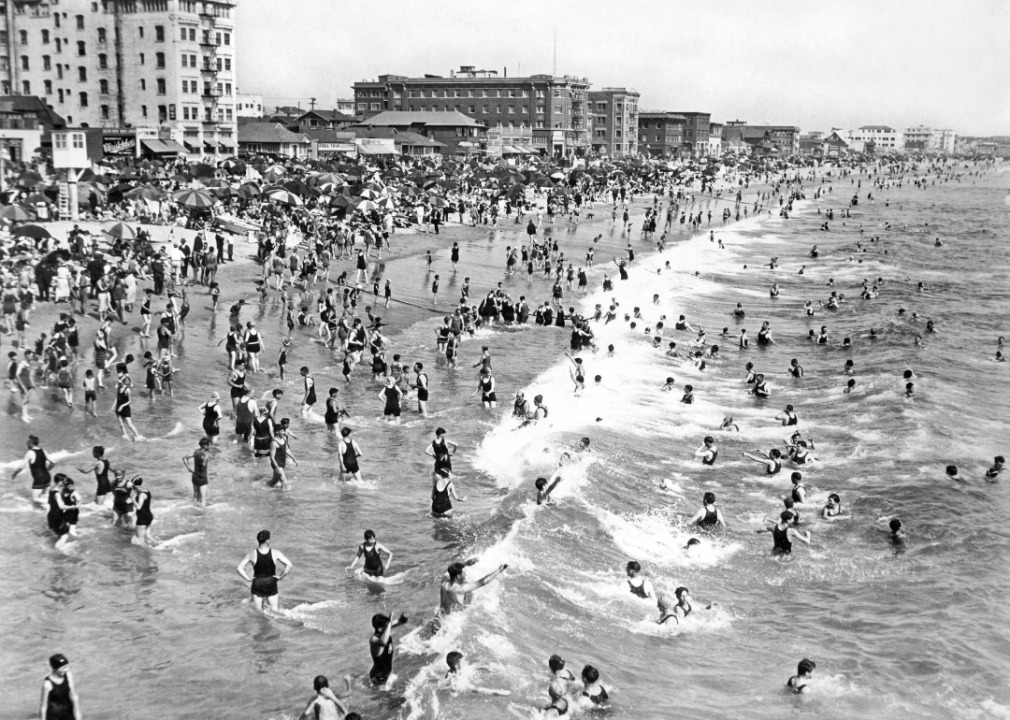 In the 1920s, dozens of fancy beach clubs sprung up along the beaches in Santa Monica, California. These gathering places, which were whites-only, attracted some of the area’s most wealthy and notable restaurants, who’d all crowd together under the clubs’ beach umbrellas and around dining room tables. 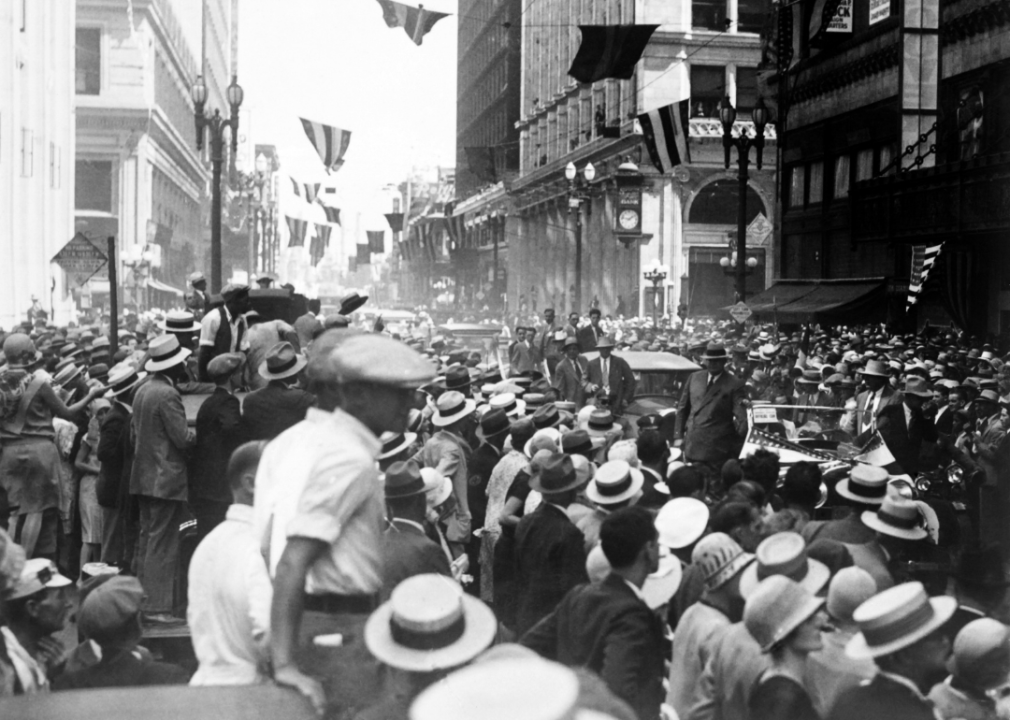 In 1927, two years before he was elected president, Herbert Hoover visited LA. The Republican politician had seen his popularity skyrocket (as evidenced by this reception) thanks to the assistance he had offered Mississippi Flood victims earlier that year in his role as Secretary of Commerce under President Warren Harding. 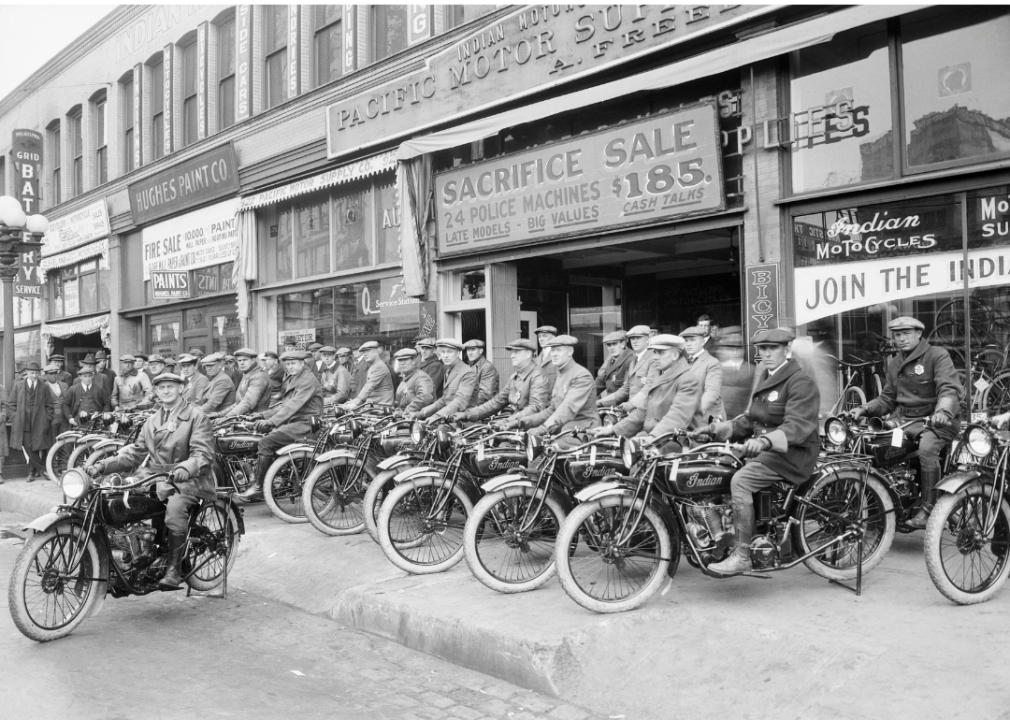 With its wide boulevards and crisscrossing freeways, LA is known around the world for its car culture. This reliance on automobiles really took off during the 1920s, when the number of registered private cars exploded from 161,000 to more than 800,000. To keep up with these Fords and Chevys, the LA Motor Corps (pictured above) took to riding around on Indian motorcycles. 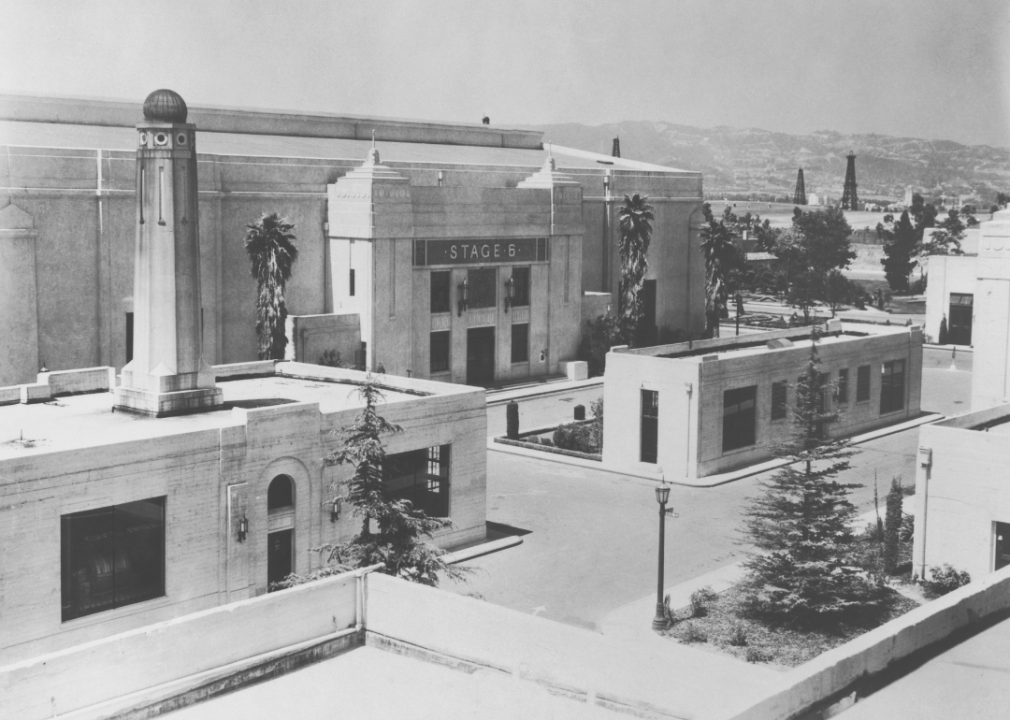 One of the biggest independent film studios of the 1920s, Fox Film acquired the rights to the Movietone sound system—a sound-on-film technique that allowed for the synchronization of sound and image in recorded film—in the mid-1920s. The company’s West LA studio, pictured here, was dedicated to producing these new talkie pictures. 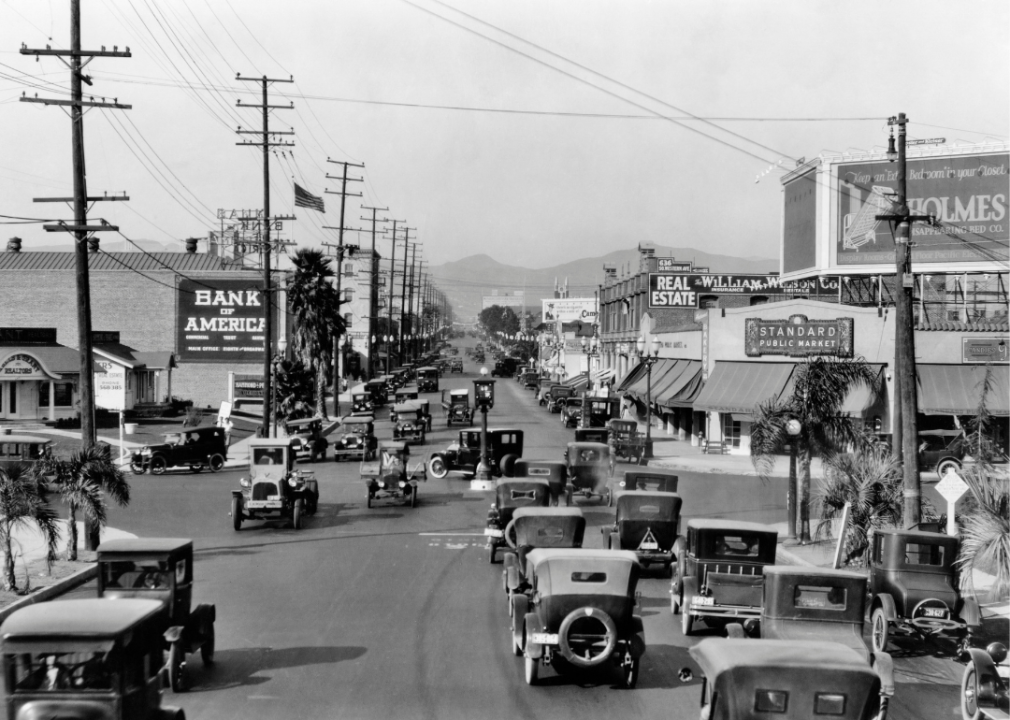 Wilshire Boulevard runs from the heart of the city’s downtown district to the Pacific Ocean. One of the first parcels of land for the street was donated by millionaire socialist Henry Gaylord Wilshire, in the late 19th century on the condition the street be named for him and remain absent rail lines or streetcars. The properties surrounding it were only just beginning to be developed by the 1920s. 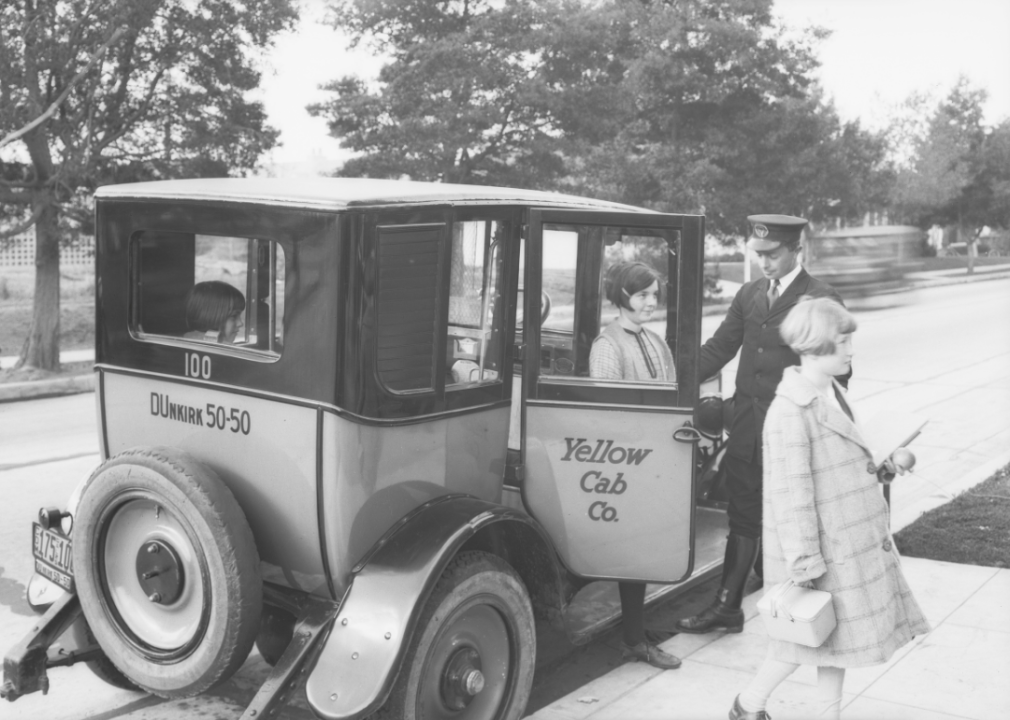 Folks without a private car, and who couldn’t be troubled to rely on the regularly striking Pacific Electric railway system, would use cabs to get around the sprawling city. Here, a yellow cab driver helps his passengers disembark after their ride. 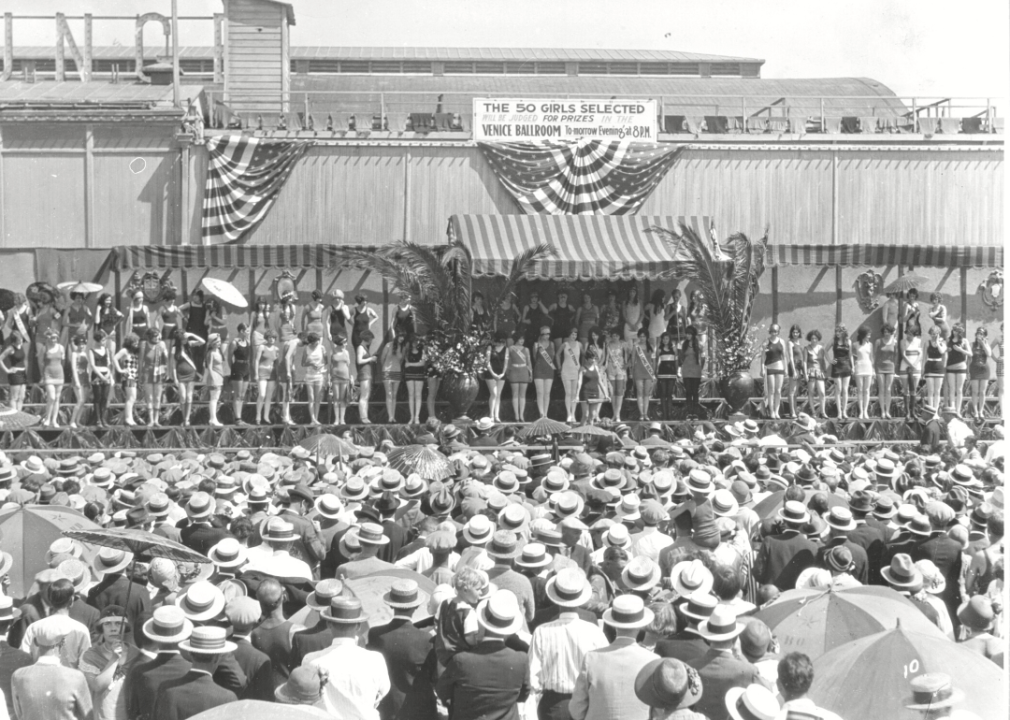 In the early years of the 20th century, beach resorts began hosting beauty pageants as a form of entertainment for vacationing middle classes. These contests, like the Bathing Beauty pageant pictured above, would eventually lead to the Miss America pageant we’re so familiar with today. 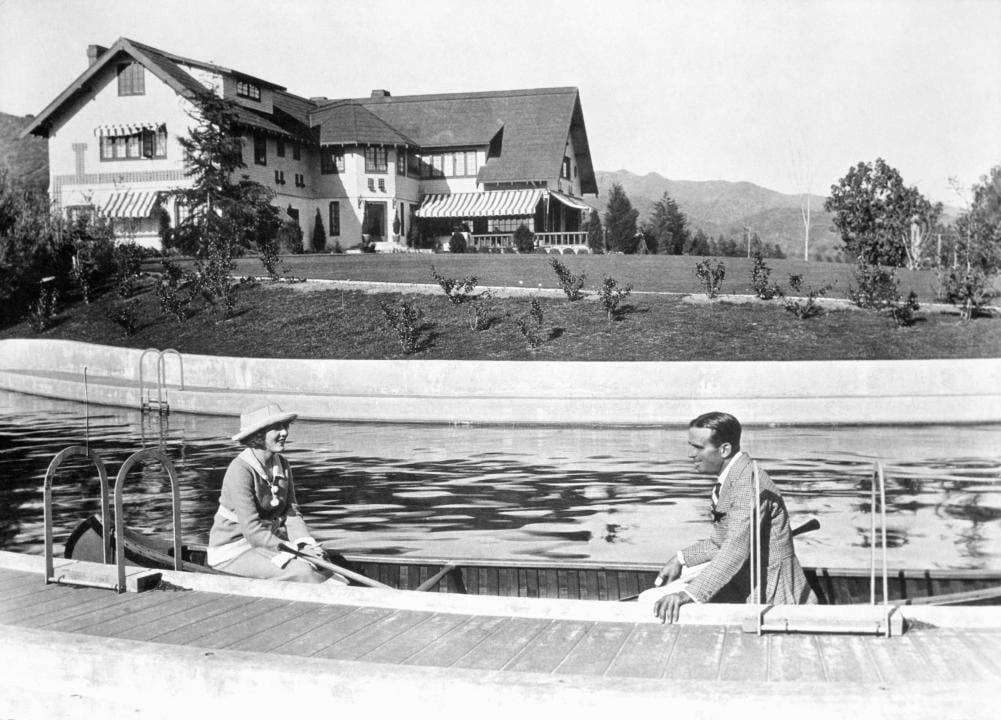 A pioneer in the film industry, actress Mary Pickford was one of the most recognizable faces in the world in the 1920s. Dubbed the “Queen of the Movies,” Pickford is often regarded as the first movie star and is best known for movies like “Coquette,” which won her the second-ever Academy Award for Best Actress. Here she’s pictured with her husband, fellow actor Douglas Fairbanks, at their sprawling mansion in the LA hills. 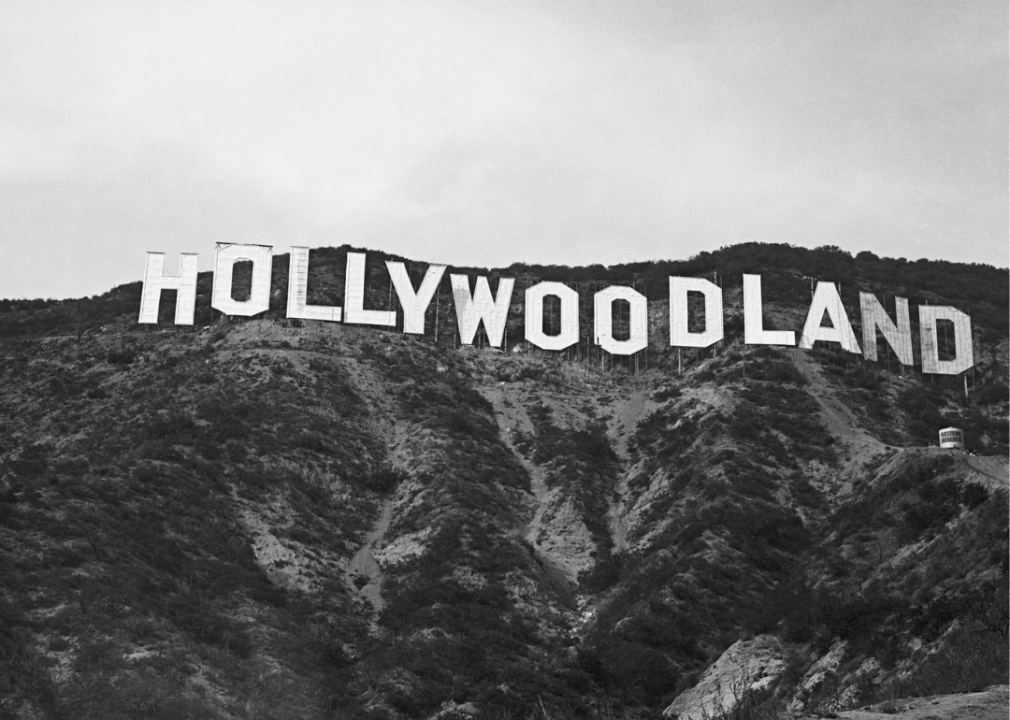 Conceived as an advertisement for a new suburban housing development, LA’s most famous sign originally read Hollywoodland. Erected in 1923, the wooden sign was meant to be temporary, but in the late ’70s, the still-standing marker was replaced with a more durable steel structure (the “land” had been dropped in the 1940s). 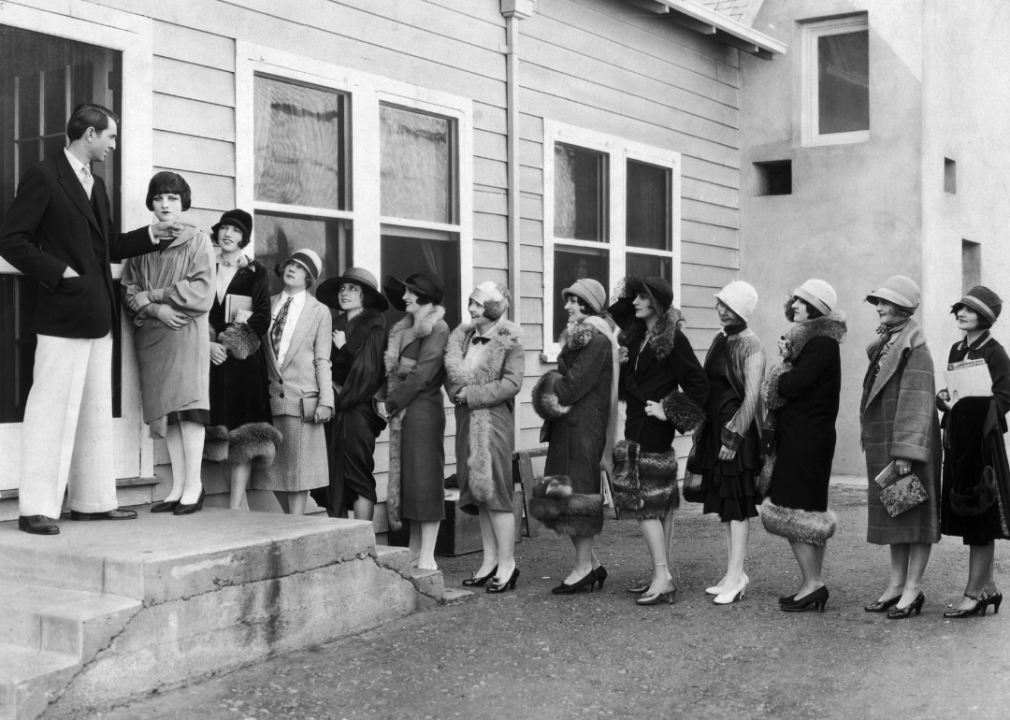 Two industries helped drive LA’s growth in the 1920s: oil and movies. Here, a group of well-dressed young women line up outside a studio office, hoping to be chosen as extras for a movie. 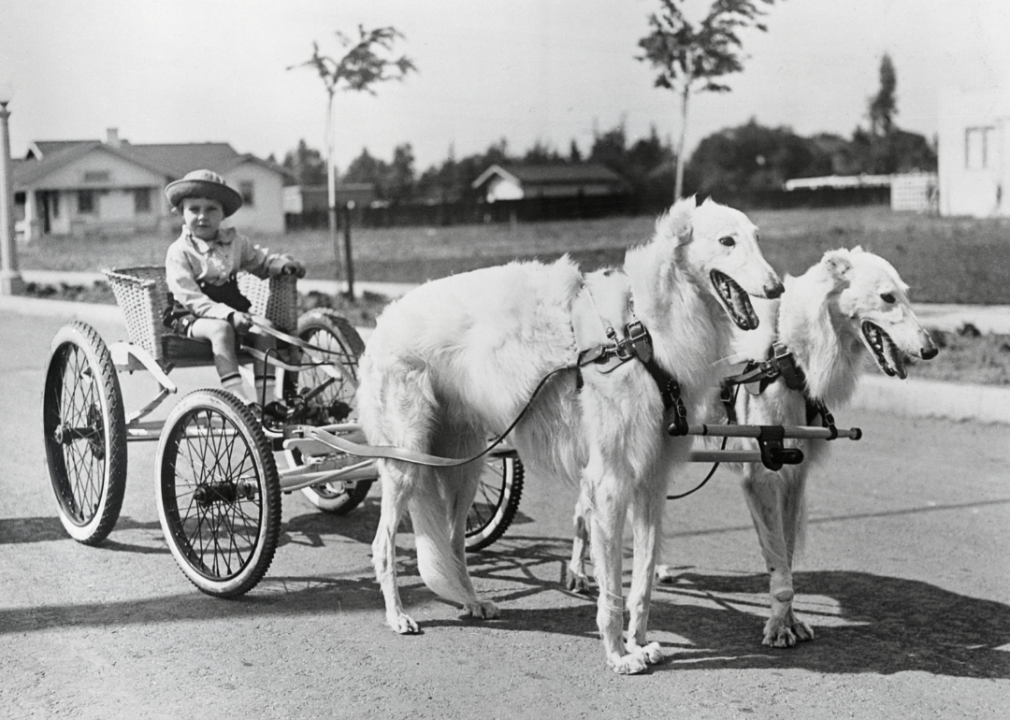 In 1920s LA, pageants and performances weren’t restricted to humans. Here, a young boy poses on a studio backlot with two Russian wolfhounds, the winners of an LA Kennel Club dog show. 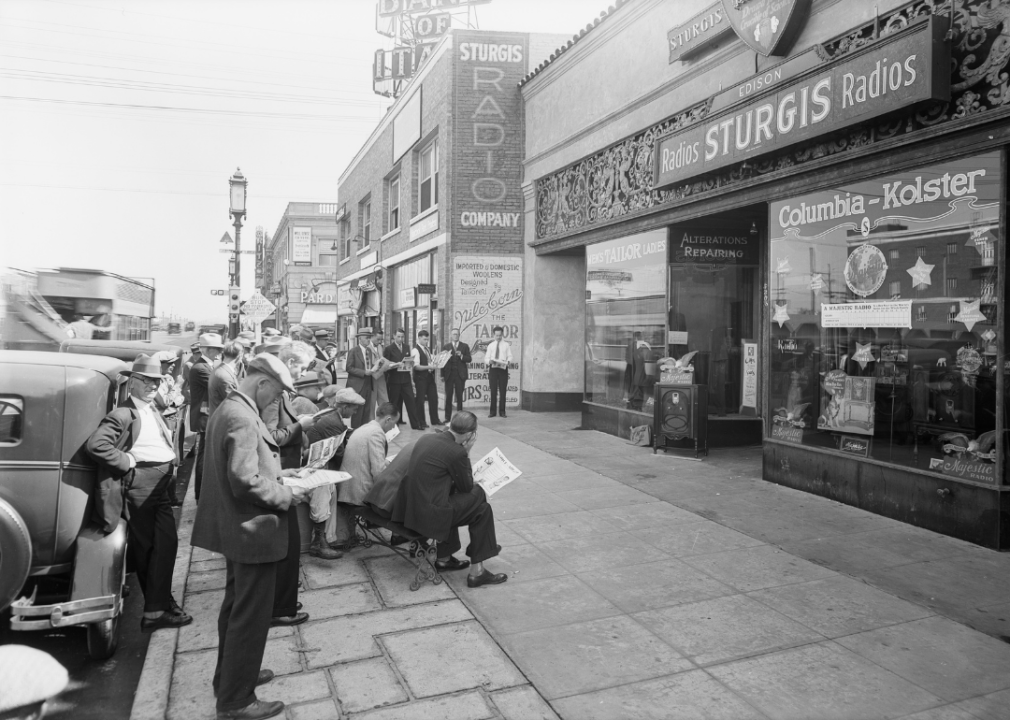 Days before Black Thursday, a group of relatively stress-free men crowded in front of Sturgis Radio store to listen to a World Series game. They had no skin in the outcome (the LA Dodgers wouldn’t move from Brooklyn until the ’50s), but the gathering proves that the city had been primed to host a Major League Baseball team for years before it happened. 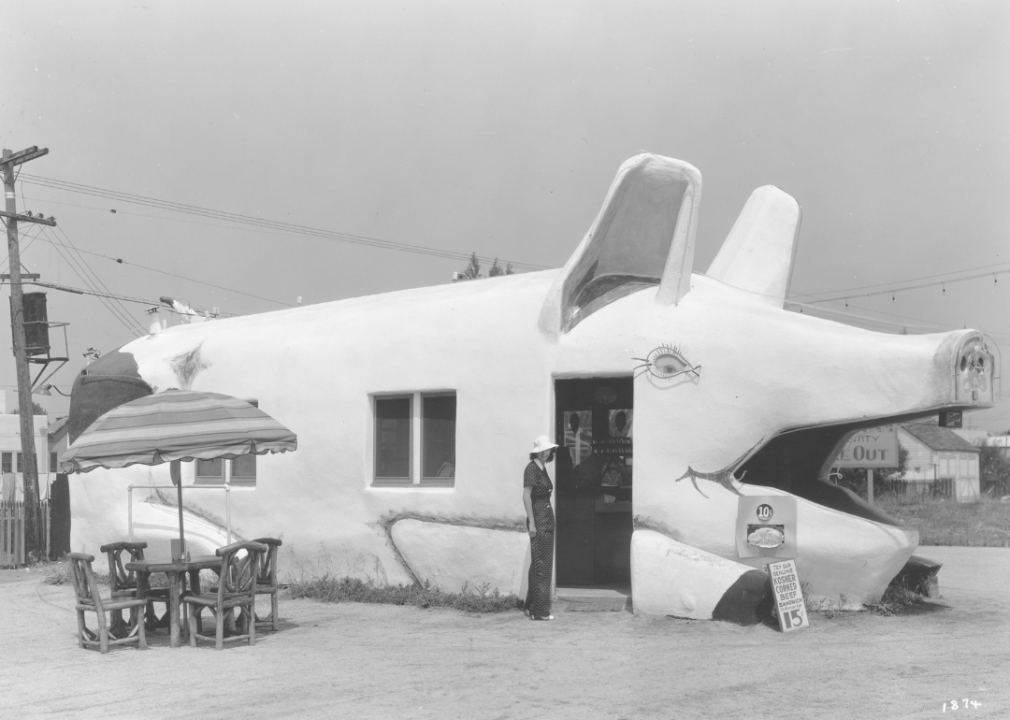 The 1920s marked the beginning of an architectural movement in LA architecture when kitschy novelty buildings began popping up everywhere. These structures were designed to catch the eye of motorists and were often large-scale versions of the wares sold inside—for example, the pig pictured above was actually a barbeque joint. The trend continued until the end of the 1940s, and many original examples still exist in LA today. 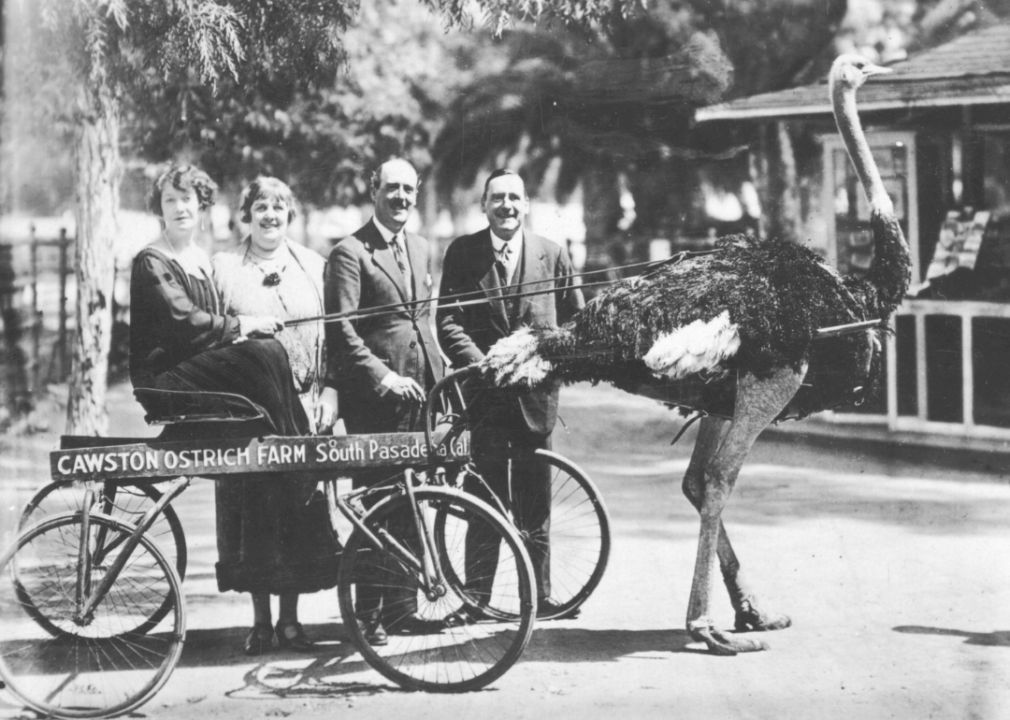 Described as the first theme parks in Southern California, ostrich farms were hugely popular (and quite abundant) in LA in the late 19th and early 20th centuries. Visitors would flock to these ranches for a chance to look at the exotic birds, and the brave would hop in ostrich-drawn carriages or wagons for a ride around the property. Gift shops sold clothes and accessories decorated with the birds’ feathers, which were considered luxurious at the time. 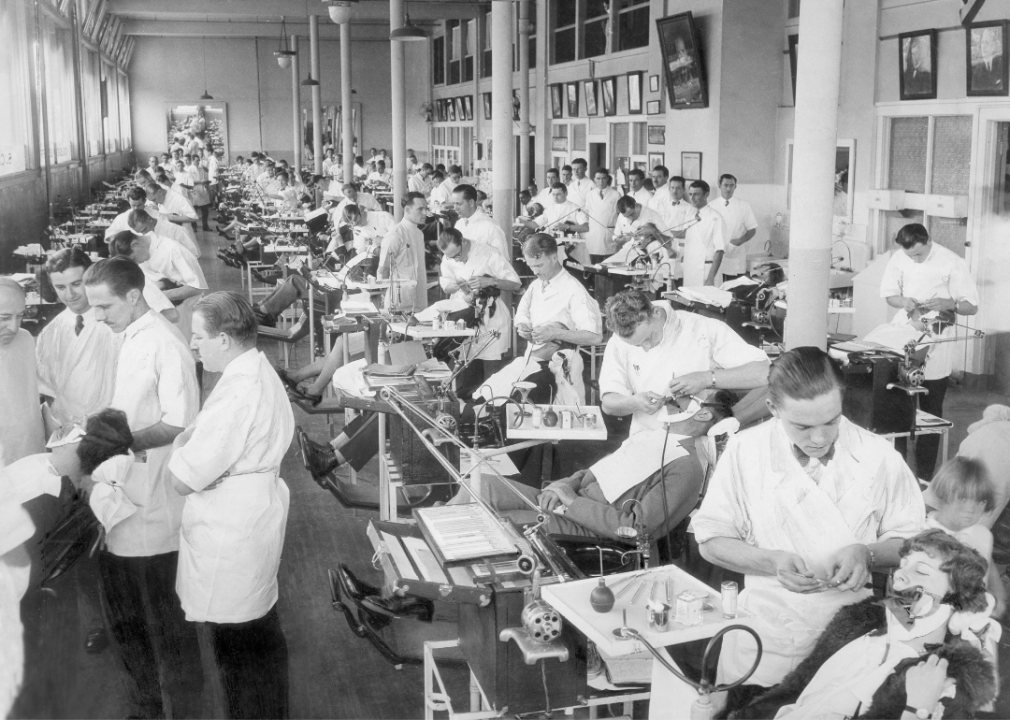 Founded in 1919, the University of California, Los Angeles, now the second-largest university in California, was still in its infancy in the 1920s. Here, a group of aspiring dentists train in the school’s state-of-the-art medical center. 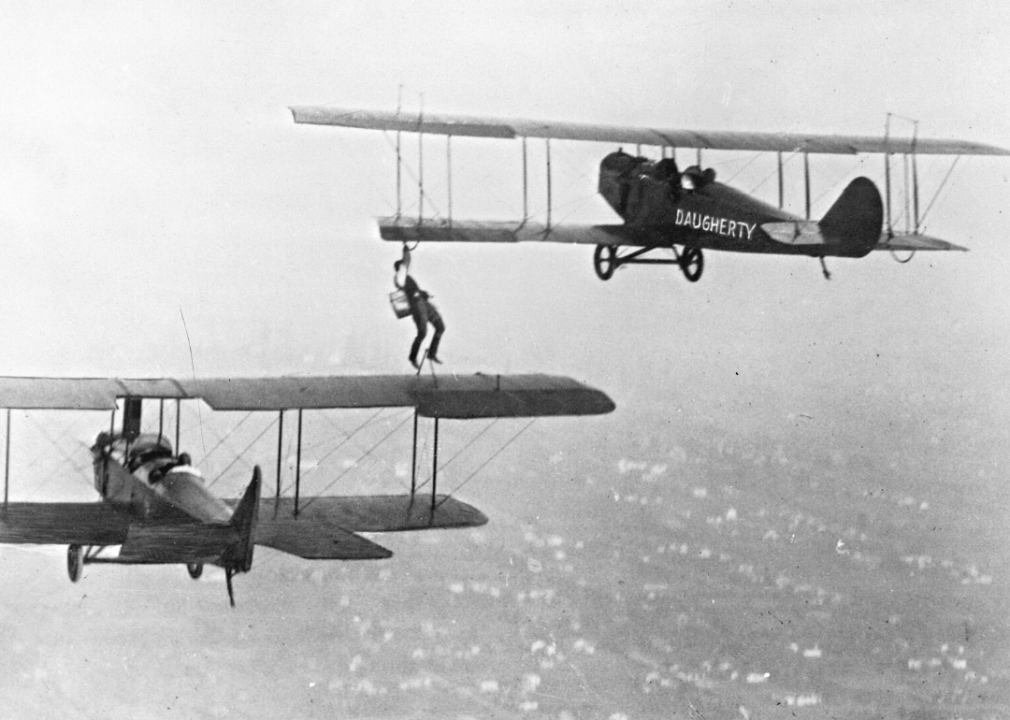 During the 1910s and 1920s, LA caught a severe case of flight fever. Dozens of aircraft manufacturers popped up around the valley, enticed by near-perfect year-round flying weather, plenty of space to lay down runways, and cheap, plentiful labor. As the industry grew, so did the number of demonstrations, where gravity-defying tricks like this one (where a young man refuels another airplane midair) would be performed. 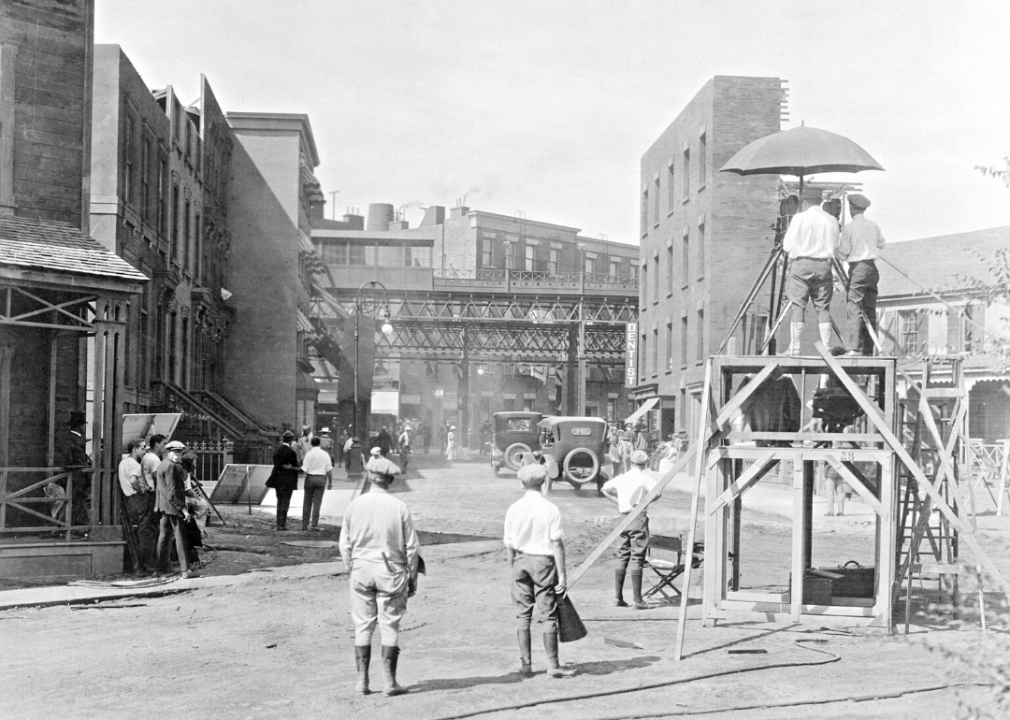 A prime example of the movie magic that LA has created behind countless films, this picture shows a film crew on a Hollywood studio lot working on a set constructed and dressed to resemble midtown Manhattan. 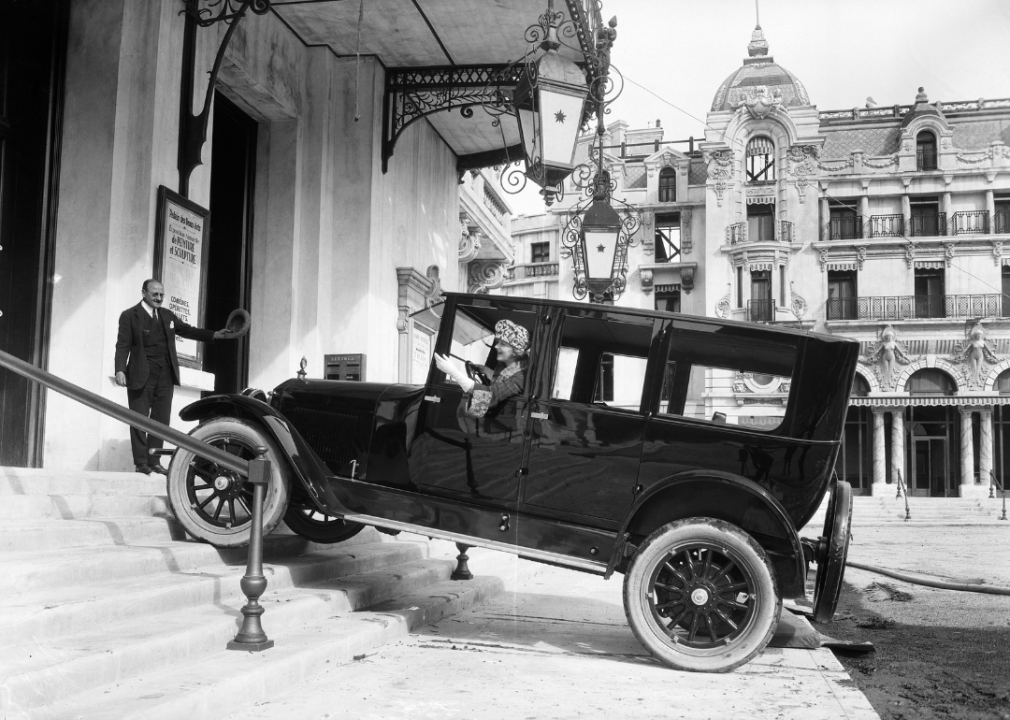 In the 1920s, actors and actresses flocked to LA. They saw the city as their playground, not a real place but a fancy backdrop for their hedonistic lifestyles. Here, actress Miss DuPont drives a car up a set of hotel steps, demonstrating just how wild things could get in the City of Angels.