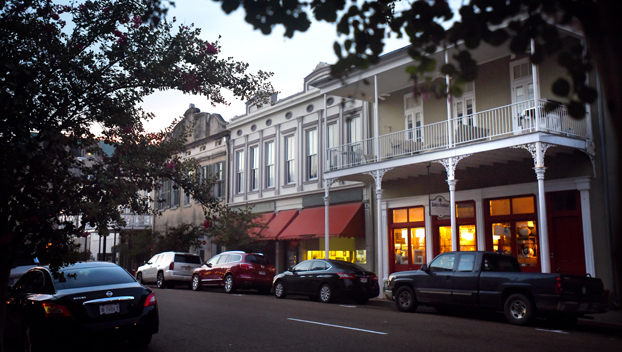 The atmosphere at the Natchez City Auditorium Thursday night was festive and grateful.

Introduced by Natchez native and state Rep. Robert Johnson, D-Natchez, and businesswoman and pastor Robbie Cage Furge, both heralded Gibson as a hard worker and one who can motivate a team and is accessible to all.

To be a leader, Johnson said, “You’ve got to do the work. You’ve got to put your feet to the ground and your hands in the dirt.” He said Gibson does that.

“We have a mayor who will listen to everybody. Mayor Gibson is at everything from a baby shower to a Mardi Gras Ball,” Furge said.

Gibson highlighted a number of accomplishments of the past two years, spotlighting new businesses and increases in sales taxes.

One of those businesses added is Loss Prevention, located at the corner of Franklin and Pearl streets. “They just told me they are running out of space,” he said.

Gibson said Jordan Carriers, who last weekend celebrated 30 years in business, have added 80 new drivers in the first part of this year and plan to add 80 more before the end of the year.

“Jordan Carriers is about to break ground on a new, 28,000 square foot headquarters right here in Natchez,” he said.

More than 600 job listings in Natchez can be found on Indeed.com, the mayor said.

“Statistics don’t lie. Facts are stubborn things,” Gibson said. “We issued over 1,322 new building permits in the last two years and have had $53 million in new construction.”

Sales tax revenues are $300,000 ahead of where they were last year, he said. The real estate market is still strong, with less than 100 homes available for sale in Adams County and fewer than 28 in the downtown area.

Gibson listed other accomplishments, like a new Downtown Natchez Alliance, a return as a Mississippi Main Street Community, a new city planner, Frankie Legaux and a focus on code enforcement. He boasted about the success of the city’s festivals and people they are bringing into the community.

The mayor previewed a concert on the bluff set for October, which will feature Patti LaBelle, CeeLo Green and Kool and the Gang. The 37th annual Great Natchez Balloon Festival will follow that concert in a matter of weeks.

“Tourism is still our number one industry and we are thriving,” he said.

The mayor thanked Police Chief Joseph Daughtry, who Gibson said has returned old-fashioned policing to Natchez and in doing so has gotten a significant amount of drugs and a number of guns off the city’s streets.

He also announced the police department has been successful in earning a new, $100,000 grant, which will help pay for overtime for Natchez police officers.

The mayor also announced that Natchez Police Department this week became a fully accredited training academy in the state of Mississippi and can now train part-time and auxiliary officers from all over the state.

“That’s the first step in becoming a fully accredited training academy,” capable of training full-time police officers in Natchez, rather than having to send them to an academy in Jackson.

“The two years now past have been amazing, but you ain’t seen nothing yet,” Gibson said.

He went on to highlight a number of plans for the future, such as a plan for MED Natchez, which stands for medical economic development.  MED Natchez is a plan that has been devised by The Horn Group, which wrote a recovery plan for the State of Louisiana after Hurricane Katrina.

He said a ninth boat would join the lineup of those cruising Natchez regularly. The American Symphony by American Cruise Lines will be christened in Natchez at the Natchez Riverfront under the hill on Aug. 30 at noon.

He said Natchez will be the “Godmother City” to the American Symphony, meaning cruises will begin and end in Natchez, and that American Cruise Lines will work in partnership with the developers of the Eola Hotel and American Airways to make that possible.

“By 2025, cruises will be starting and stopping in Natchez,” Gibson said. “Watch out New Orleans and Memphis. Natchez is on the rise.”

He also said Natchez will be spending $6 million to renovate and modernize the Natchez Convention Center, the city auditorium, City Hall, the Natchez Community Center and other city properties, like the Canteen at Duncan Park and the completion of the Hiram Revels Plaza.

“Get ready. It’s happening, Natchez, but it wouldn’t be happening without all of you. This is more than one person can do, it’s a collaboration,” Gibson said. “Just as that river continues to move forward, just as that Natchez current is ever strong, so are we.”