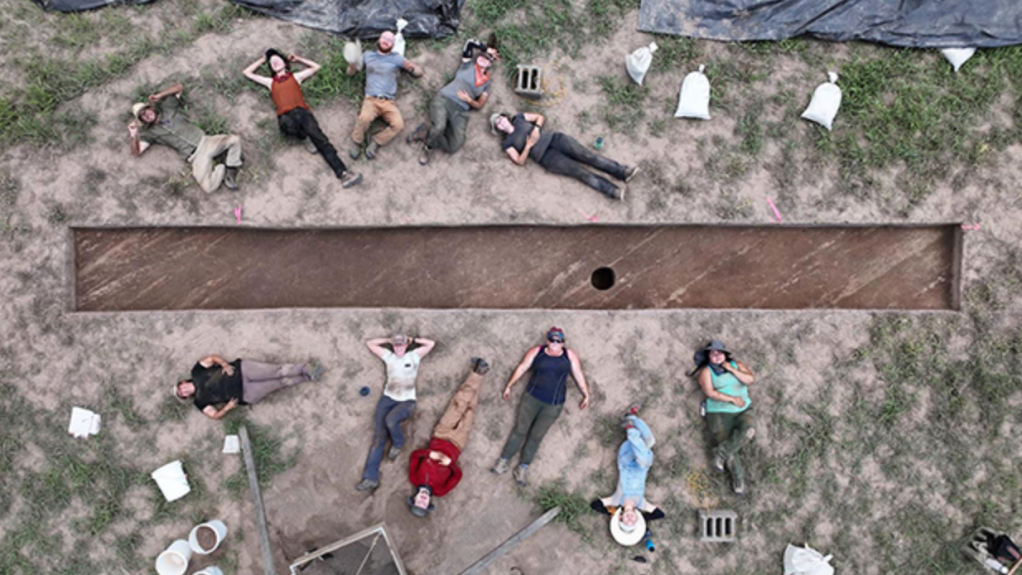 The question the graduate archaeology students asked during their lunch break concerned the refreshment capacity of chicken broth. Under a tent in a field off the Natchez Trace Parkway, they deliberated upon relevant factors such as the gelatinous texture, and protein and salt contents.

After lunch, the students returned their focus toward a rectangular vacancy they had created in the ground, and the buckets filled with dirt that formerly filled the hole.

At the same time, they turned their focus toward the Baytown/Troyville period of Native American civilization, about 350 to 700 A.D.

Unlike Feltus, a nearby site which Kassabaum has been studying with colleagues since 2006, the Pumpkin Lake study is at a very early stage.

“Our goal is to determine archaeological potential,” Kassabaum said. Because of the proximity of Feltus and another mound which hides in the woods just a few yards from the field they’re excavating, the site very likely once hosted Native American activities pre-colonization.

Before they chose where to focus their dig, they created a 25-meter grid which they disked up and then systematically walked over, looking for any possible artifacts.

They found lithic, or stone, materials which were projectile points and the debris used to make them.

Next, was the geophysical prospecting stage. Regina Lowe, a UNC graduate student walked the entire expanse of the field for a week with a machine which detected “ambient magnetism,” as she called it.

Everything has a magnetic gradient, she explained. It doesn’t need to be metal, things like water content and organic versus non-organic content can cause differences in magnetism. Her machine, she said, is like a high-powered metal detector. It has to be more powerful to detect the more subtle magnetism.

Lowe’s machine collected the data from the walk over the field and generated a map which showed a unique dark halo shape, a sign of a high ‘ambient magnetism,’ or magnetic differences between materials in the soil. That was where they chose to dig, or ‘ground-truth.’

Between periods of shoveling, the students recorded their findings. They sifted through buckets of dirt and noted the color of the soil.

Devin Henson, a UNC graduate student, sat in the excavated rectangle with a Munsell soil book. On each page were paint chips, and then an adjacent hole, so Henson could approximate a color as accurately as possible.

He brought each sample underneath the page and compared it to each chip before giving the alphanumeric identifiers to Qi Liu, a UNC undergraduate student, to record.

On the inside cover of the Munsell book is a three-dimensional representation of all colors, by hue, value and chroma. It seems like it should be infinite, but it is just hyper-specific.

Kassabaum’s book, which she shares with her students because it is about $250, is soil specific. It has mostly variations of browns, reds and greys.

The darker soil might indicate more organic matter like plants or trash, Kassabaum said. By comparing Pumpkin Lake with their findings at Feltus, it’s possible that the ground where they are digging was once disrupted to build a mound or to create a hole for storage.

“If we knew immediately, then we’ve seen it before,” Kassabaum said. The mystery of Pumpkin Lake keeps her oscillating between excitement and frustration.

“We have to set aside the desire to know it all right away,” she said.

The period which they’re excavating also comes before Feltus’ origination. Not only is it more enigmatic, she said, because is less well understood, but it creates a new question about the relationship between Pumpkin Lake and Feltus.

They are close geographically, but what is their relationship as seen through time?

For a long time archaeology has associated flat top mounds with chieftain like societal organization. They argued that to engineer and build the feat that was a flat top mound, there must have been a powerful person in charge. This was often evidenced by homes that were built on top of the mounds.

Kassabaum suggested that the relationship might be more complicated. Emerging with the studies of earlier periods, is less evidence of homes on top of mounds. It’s possible, Kassabaum said, that the flat top mounds could have been feats of communal cooperation

“It goes against the assumption that you have to be intensely hierarchal to do big, powerful things,” Kassabam said.

The mounds were highly engineered. Whoever created them must have had a detailed understanding of the soil to pack it and plant it in a way that prevented erosion. They also varied the kind of soil they used for different parts of the mound and used intact roots as part structure.

Biases in archaeology, she said, has diverted focus from these soil structures. In that neglect, especially in the United States, people often overlook the incredible engineering of Native American societies. She said it could lead to ongoing prejudices because with knowledge comes respect.

People tunnel their vision in all sorts of ways, whether it is away from the Anno Domini years and Native American history or towards stone and away from dirt, Kassabaum said, “but the past shows us what’s possible.”