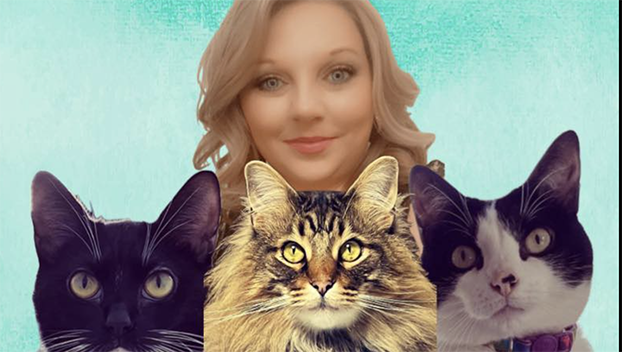 On Valentine’s Day last year, Kristi Wright-Cates uploaded a narrated video on TikTok of two of her cats acting as if they were mad at each other. Hundreds of talking cat videos and millions of online followers later, she and her three beloved pets are internet stars.

Her social media page — 3 Southern Cats & Momma — has 3.7 million TikTok followers, close to 255,000 Facebook followers and more than 87,000 YouTube subscribers. She has branched into merchandising through custom shirts, hoodies, coffee cups and tote bags of her cats — Tigger, Willow and Weezer.

Nearly every day, Wright-Cates uploads a new video, each with comical narration, of her cats’ reactions to situations such as receiving fan mail, getting Easter presents and reacting to an actual online reply from Reba McEntire.

Most videos, she said, feature the cats going about their routines. She adds funny voices to illustrate their thoughts and inner dialogues, which has made their online presence skyrocket. Wright-Cates doesn’t write skits or scripts; instead, she ad libs what the cats may be thinking.

She be lying all the time

“We do cuss, sometimes a little too much, but you have all these other cats who are cute and sweet; I wanted to put a twist on it and be different,” Wright-Cates said. “In the comments of that first video, a lot of people said this was different. It wasn’t a trend like everybody was doing on TikTok, it wasn’t dancing, and it was the southern accent. That’s just how I talk.”

In the first viral video, the cats were put in their car seats to go play golf, and Willow said she wanted to go to “Mickey Donalds.” A video of the cats’ reaction to a positive COVID-19 case in their household has gained the most views so far: 13.2 million.

Normal everyday Mississippi phrases on the videos have drawn interest from people from as far away as Europe.

“It gives people a whole other outlook of cats and the South,” Wright-Cates said. “A lot of our sayings, other people have never heard of them, like ‘fixin’ to have come apart.’ There’s people up north that have no clue what I’m even talking about, and it’s intriguing to them.”

“Bless your heart,” is another phrase which people outside of the southern United States don’t seem to know. Ditto “Come to Jesus.”

“I’m friends with a guy from the U.K. … He’s just blown away with the South and how we talk,” Wright-Cates said.

Wright-Cates adopted 7-year-old Willow from a shelter around four years ago. She found Tigger, 4, and Weezer, 1, through Facebook posts for free kittens. Tigger is a Norwegian forest cat, and Willow and Weezer are both domestic short-hair cats.

Wright-Cates said the dialog she gives the cats mirrors their personalities.

“Their personalities you see on TikTok are really them,” she said. “Willow is the head queen; she’s been here the longest. She’s sassy in her own way. I just kind of revved it up a little bit.”

She described Tigger like a laid back old man, who sits like a human and sleeps on his back. Weezer is extremely hyper.

“She would run around through the house like a little crackhead, so that is her nickname,” Wright-Cates said. “It has stuck, and everybody calls her crackhead. She loves Tigger. You find Weezer, you find Tigger.”

Aside from the comedy of the videos, she has helped spread awareness of feline health.

“I actually got a video of Willow having her asthma attack while I was waiting on the vet, and that brought a lot of awareness on TikTok,” she said. “A lot of people had no clue that cats could get asthma.”

Willow has an asthma box for breathing treatments, which have led to several videos about her condition.

Her online videos have also helped sway some people’s opinions of cats.

“I’ve had people who said, ‘I don’t like cats, but you made me love them,’” Wright-Cates said. “I give people a whole new outlook on cats.”

The cat room at Wright-Cates’ home has climbing towers, kitty-size cardboard houses and trucks and paintings depicting Willow and Weezer as queens and Tigger as a king.

With the increase in online fame, Wright-Cates has turned 3 Southern Cats & Momma into her career, which includes a collaboration with Litter-Robot.

In one video, Willow was dressed fancily and asked, “Why Reber has not contacted me,” as a nod to country star Reba McEntire.

“It took off from there, and people were tagging Reba like crazy, so Reba commented and said, ‘You get you a rhinestone dress, and we can sing on the Grand Ole Oprah,’” Wright-Cates said.

About the time 3 Southern Cats & Momma gained its millionth follower, Willow received a Louis Vuitton purse in the mail. She has also received a real queen cape and crown from a fan.

Wright-Cates’ husband now has a spinoff TikTok, 3 Southern Cats and Daddy, and she has two goals for the future – stuffed animals depicting Willow, Weezer and Tigger and an animated adult television show.

She said she’s been amazed at the joy her three cats have brought so many people.

“People have said, ‘You have helped me through anxiety and depression,’” Wright-Cates said, seemingly surprised at the response. “I’m just a stay-at-home mom that just has an imagination, I guess.”