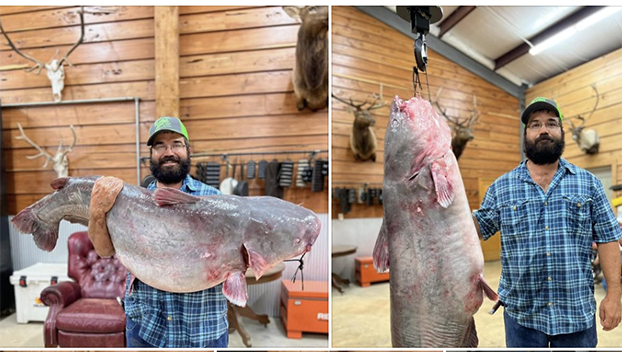 Brookhaven resident Christopher Halley drove an hour to Natchez on July 30. He purchased bait from Jo Bob’s Bait Shop on John R. Junkin Drive. He launched his War Eagle 961 Blackhawk on the Mississippi River for a day of trotlining.

Then he hauled in a 104-pound humpback blue catfish Sunday morning on July 31. Tuesday, the Mississippi Department of Wildlife, Fisheries and Parks announced the catfish was a state record beating the previous record held by Freddie Parker and Brad Smith in 1997 by three pounds.

“I knew it the day I caught it that it would be close. I brought it home and I had called the game wardens on the way home. It took us a while to find a certified scale. We managed to get Dave’s Meat Market to open so we could weigh it,” Halley said. “The game wardens never told me for certain if it was a record. I was proud of the fish either way. I have eaten some of it and it was good eating. My kids have ate a pile of it.”

Halley said that Sunday his trotlines did not yield many catfish. The weather was not cooperating, as storms drove rain in sheets from the skies.

“Most people wouldn’t stay out there. It gets kind of dangerous,” he said.

He stayed on the river, and the storm finally broke as dark fell. Halley slept in the boat in what he felt was a safe spot, protected from waves and barges.

He woke up in the morning and ran his trotlines again. He uses a “family secret” for bait, but it worked. And in the morning he hauled in the river monster.

“It was heavy, and my dip net wasn’t big enough. I got his head in, but his body was hanging out, so I used my hands and grabbed him by the gills to pull him in,” Halley said.

This is the biggest blue cat Halley has caught, exceeding the 50p-pounders he’s reeled in before. After finishing the trotline, he pulled to shore and tried to weigh the beast. It was so heavy he couldn’t keep it still to get an accurate measurement.

Once he left the river, Halley stopped by Jo Bob’s Bait Shop, and together they accurately weighed the fish. He said it was a lot easier to pick it up with two people. Jo Bob’s did more than help him weigh the fish, Halley said, adding that the shop has helped change the fishing experience in Natchez.

“Before he was there, we didn’t have a good bait shop at all. It was always hit or miss with other places,” Halley said. “He is dependable and always there.”

Halley was born in Crossett, Arkansas, and learned how to run trotlines with his dad. His father-in-law David Case and mother-in-law Sandra Case taught him to fish the Mississippi River. They were the first people he called about the catch.