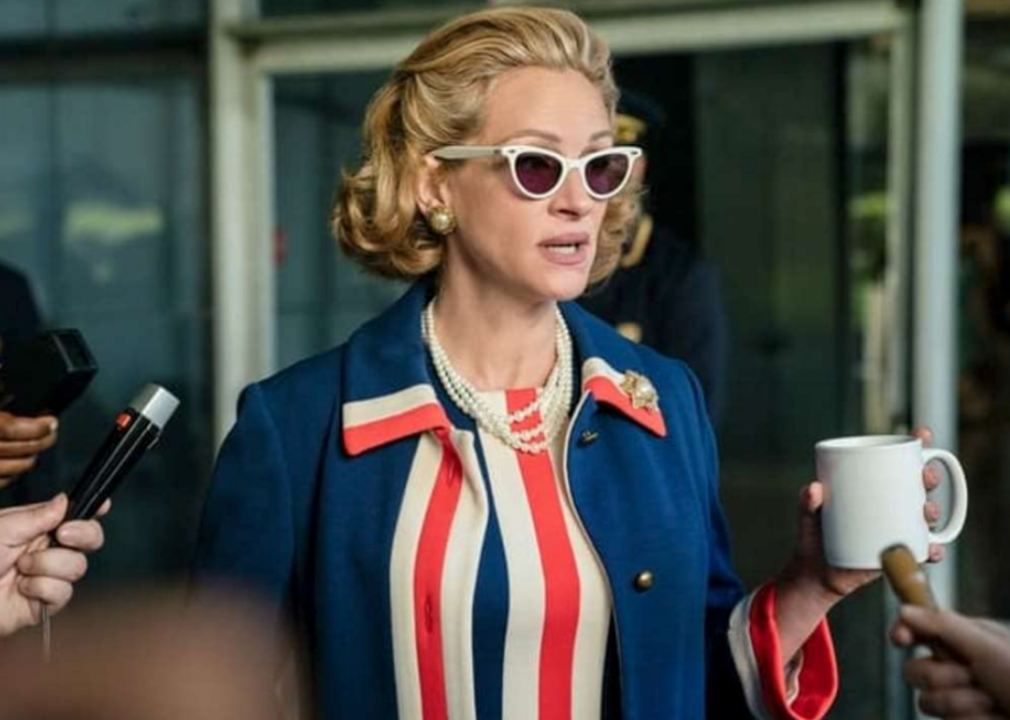 Bringing a podcast to the screen comes with its own set of pros and cons. Serialized podcasts are often many hours long, providing solid story arcs that might be harder to find in a more straightforward video game. However, since podcasts are an audio medium, it’s up to the television creators to figure out how to best visualize the source material.

So what are some examples of podcast-to-TV series adaptations, and which are worth checking out? Stacker compiled a list of all podcasts turned into TV series with more than 1,000 votes on IMDb and ranked according to IMDb user rating, with ties subsequently broken by votes.

From “Homecoming” to “The Dropout,” here is a ranking of 17 TV shows that are based on podcasts. 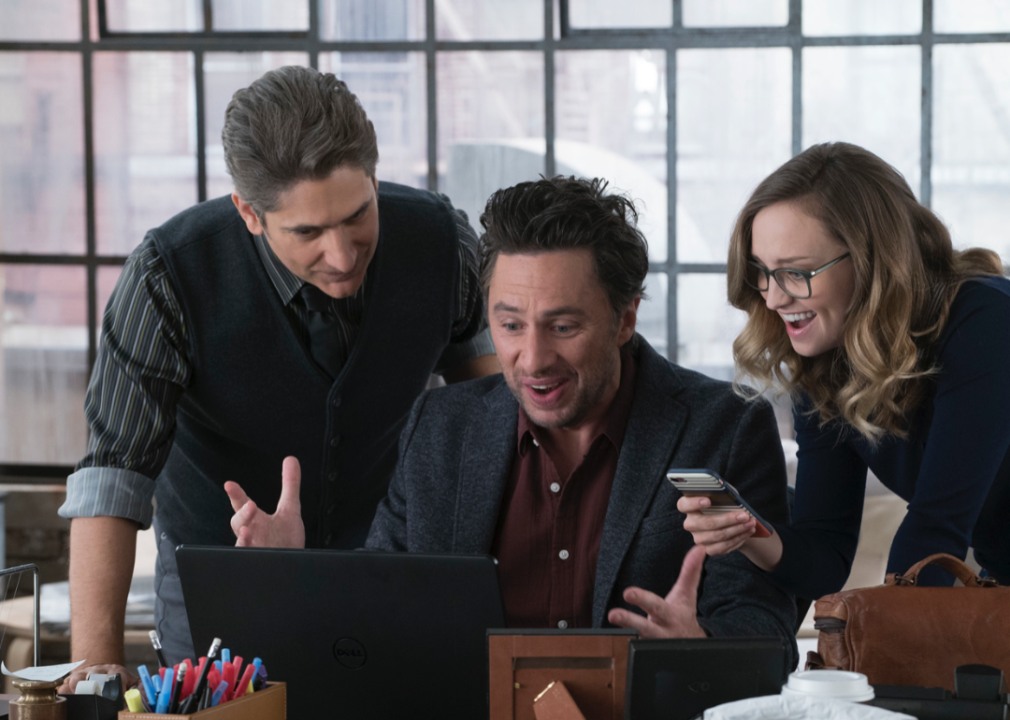 “Alex, Inc.” is a sitcom starring Zach Braff as Alex Schuman, a radio journalist who decides to strike out on his own and embrace the growing pains of establishing his own business. The show lasted one season, and is loosely based on the Gimlet Media podcast “StartUp.” The podcast’s first two seasons focus on how two businesses—Gimlet Media and a dating company called “Dating Ring”—were started, while Season 3 began following one business’ origins each episode. 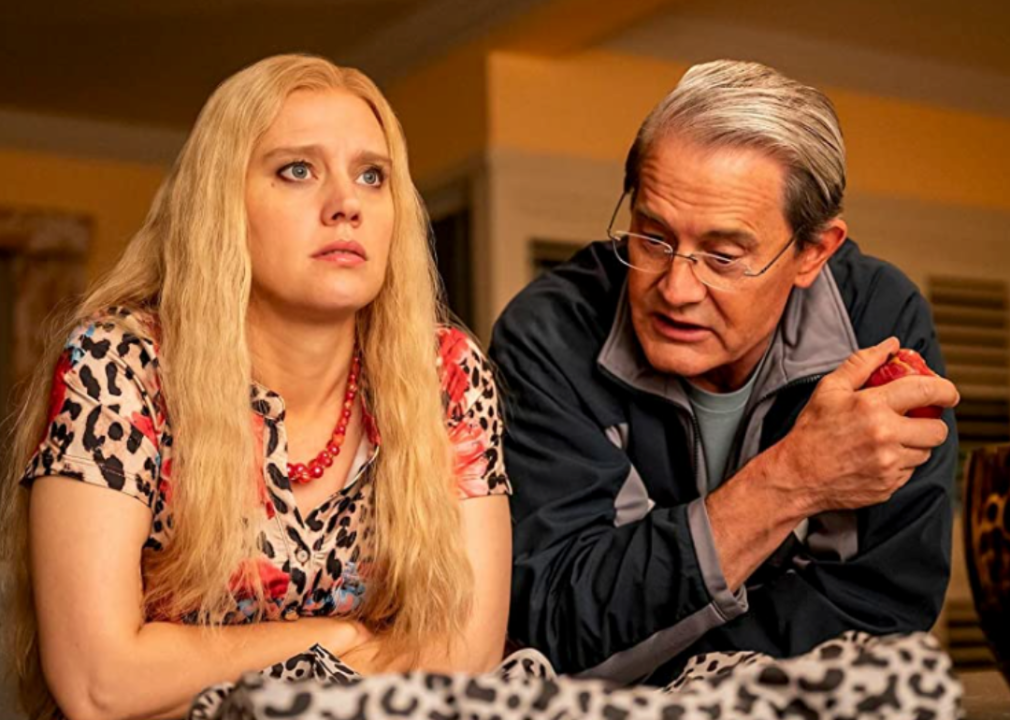 Capitalizing on the popularity of Netflix’s 2020 docuseries “Tiger King,” Peacock released the limited series “Joe vs. Carole,” starring Kate McKinnon and John Cameron Mitchell as Carole Baskin and Joe Exotic, respectively. The limited series dramatizes how the infamous big cat lovers’ feud builds to Joe putting out a hit on Carole. More specifically, “Joe vs. Carole” was adapted from the second season of the “Over My Dead Body” podcast. However, as the Rotten Tomatoes consensus reads, many critics still found the show to be “a pale retread of an already overdone tale.” 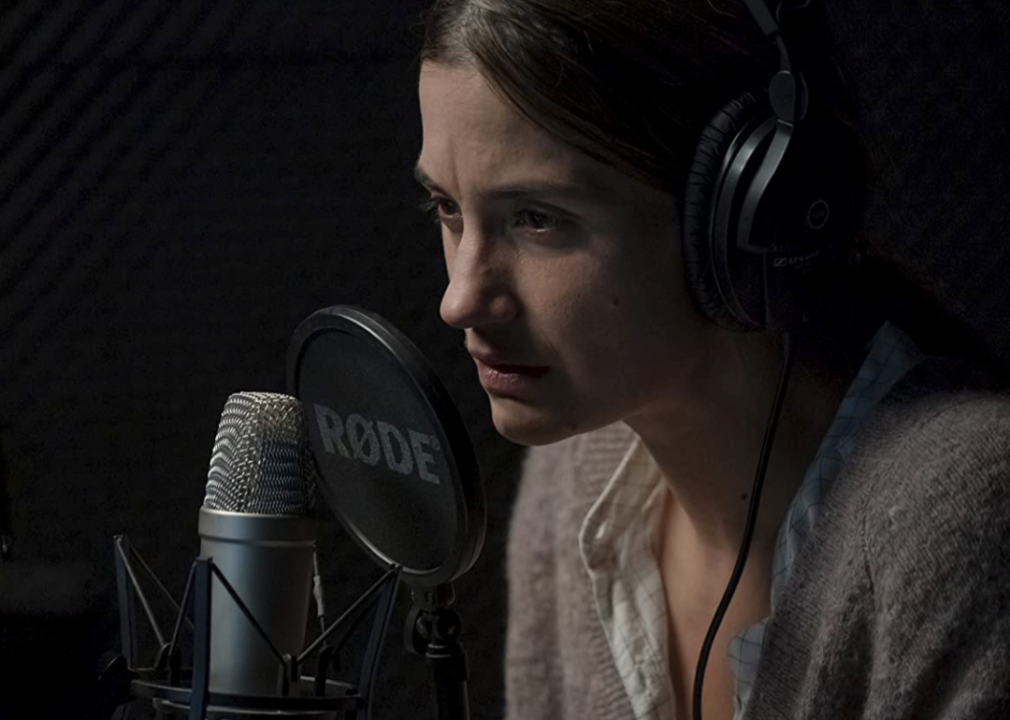 The Netflix series “Equinox” follows a Danish woman named Astrid (Danica Curcic), who decides to investigate her sister’s disappearance 20 years after the fact upon unexpectedly hearing from a similarly traumatized former classmate. The six-episode thriller is adapted from the Danish podcast “Equinox 1985,” which topped Denmark’s Apple Podcast chart when originally released. 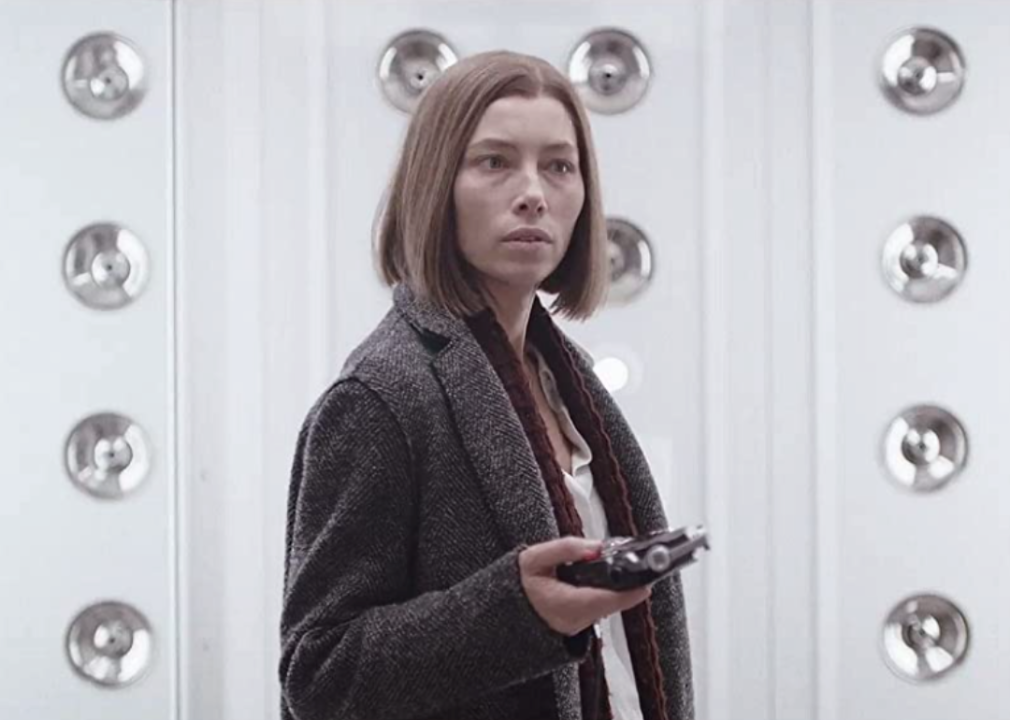 In “Limetown,” journalist Lia Haddock (Jessica Biel) investigates the mysterious disappearance of more than 300 people at a neuroscience facility in Tennessee. The show, which is based on a hit podcast of the same name, premiered on Facebook Watch and received praise for Biel and fellow star Stanley Tucci’s performances. Though the “Limetown” podcast won the Best Fiction Podcast award from the Academy of Podcasters and has a second season, the TV series was canceled after its first. 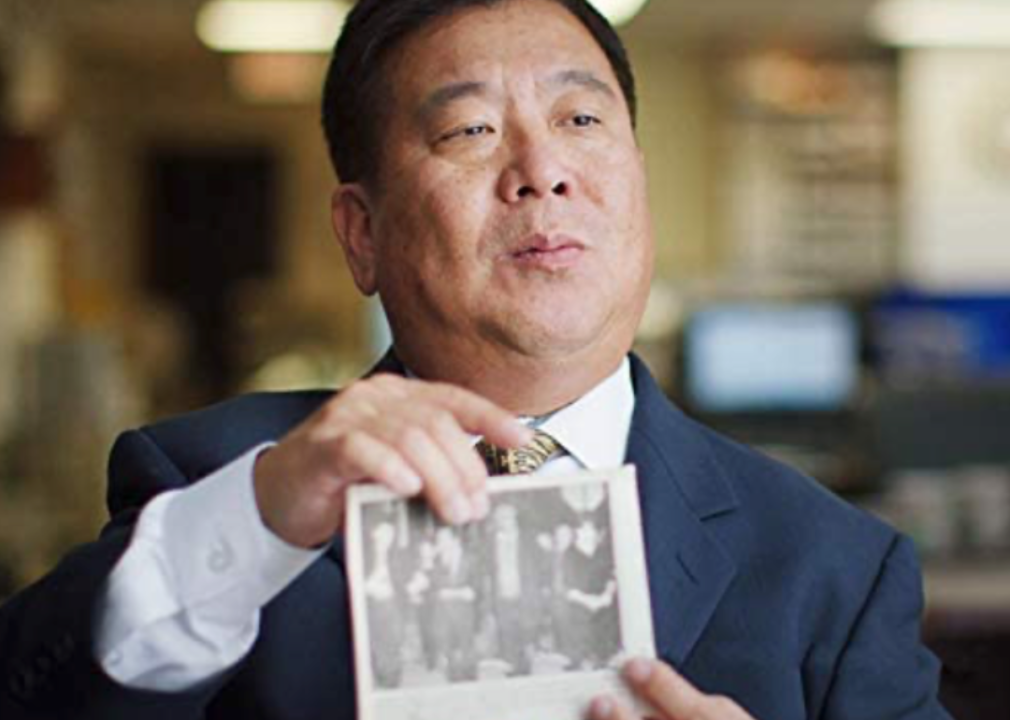 #13. The Case Against Adnan Syed

Amy Berg’s four-part documentary series delves into the 1999 murder of high schooler Hae Min Lee, as well as the eventual conviction of her ex-boyfriend Adnan Syed. The case had already catapulted to the mainstream thanks to the source material of “The Case Against Adnan Syed”: “Serial” Season 1, which told the same story. The podcast’s first season won a Peabody Award for its achievements in long-form nonfiction storytelling. 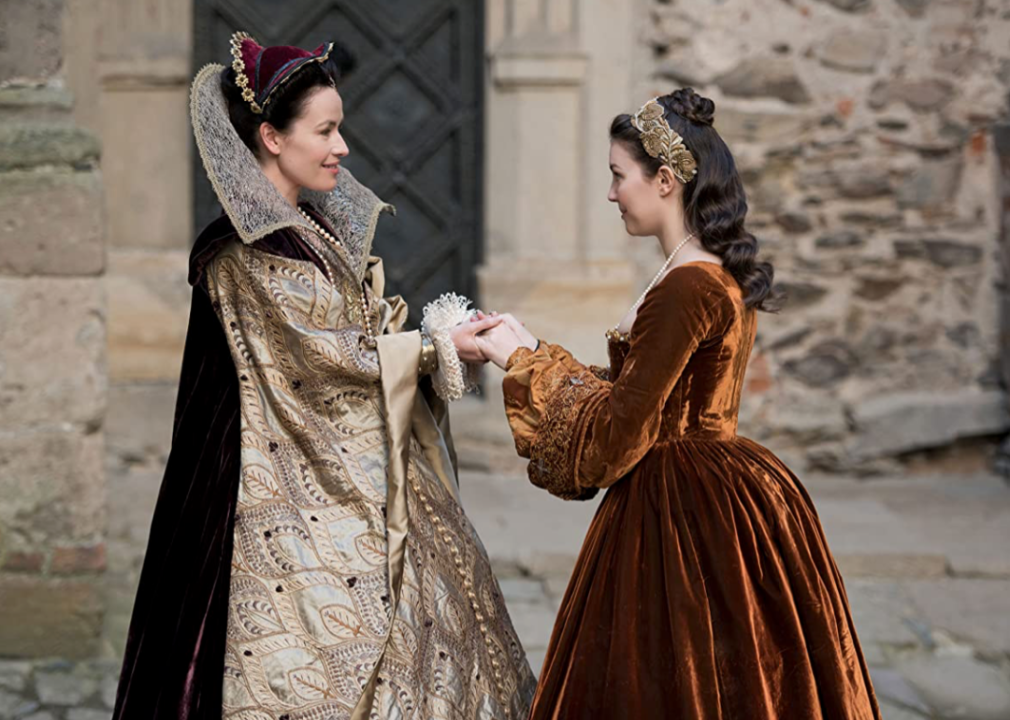 The documentary podcast “Lore” digs into topics involving legends, folklore, and superstition, examining the history behind how these beliefs got started. The podcast earned an iTunes award for Best of 2015 and Academy of Podcasters’ Best History Podcast award in 2016, so it’s no surprise that it was eventually turned into a Prime Video TV series with the same name. While the content is similar, the “Lore” show also uses documentary footage and fictionalized scenes to tell stories. Created by “Succession” writer Georgia Pritchett, the Apple TV+ miniseries “The Shrink Next Door” stars Paul Rudd as psychiatrist Ike Herschkopf, who involves himself in patient Marty Markowtiz’s (Will Ferrell) life in increasingly bizarre ways. The series is based on Wondery’s podcast of the same name, which recounted the story of how the psychiatrist abused his relationship with several other patients for his personal gain. While the podcast won a 2020 Webby Award, the TV adaptation faced more mixed reviews, netting a 57% rating on Rotten Tomatoes. 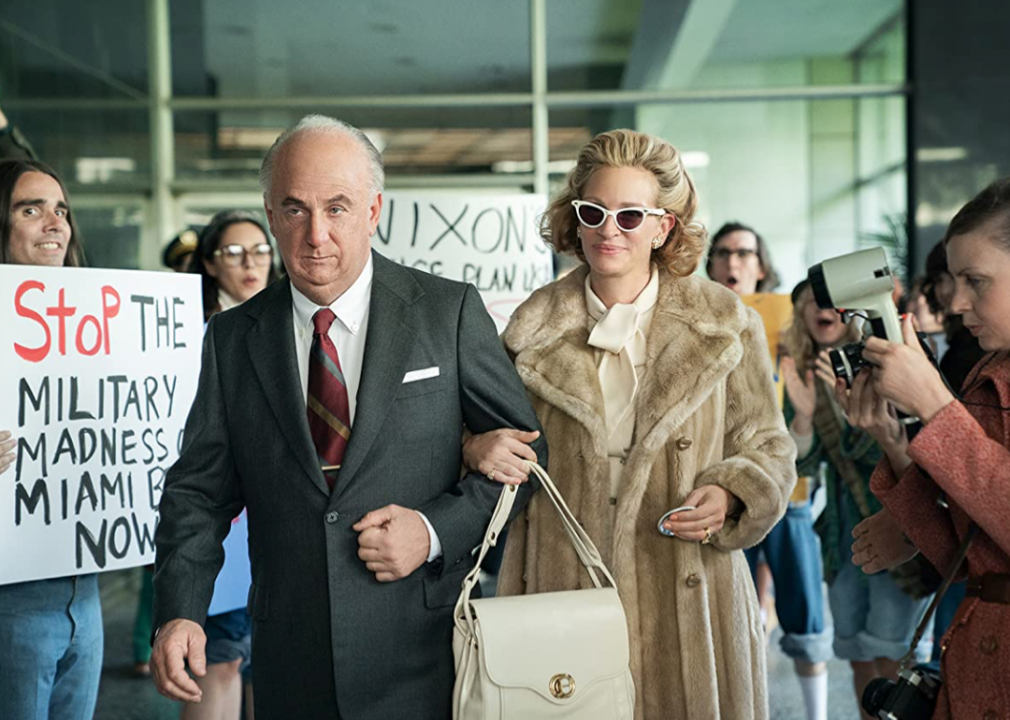 The Starz series “Gaslit” tells the story of the Watergate scandal through historical perspectives viewers might not be familiar with, such as Martha Mitchell (Julia Roberts). The wife of Nixon’s Attorney General (Sean Penn), Martha was the first person to publicly name the president’s involvement in the scandal, causing plenty of personal and political drama to ensue. “Gaslit” is based on the first season of the popular Slate podcast “Slow Burn,” which told the story of the Watergate scandal using interviews with real-life figures involved with the event. 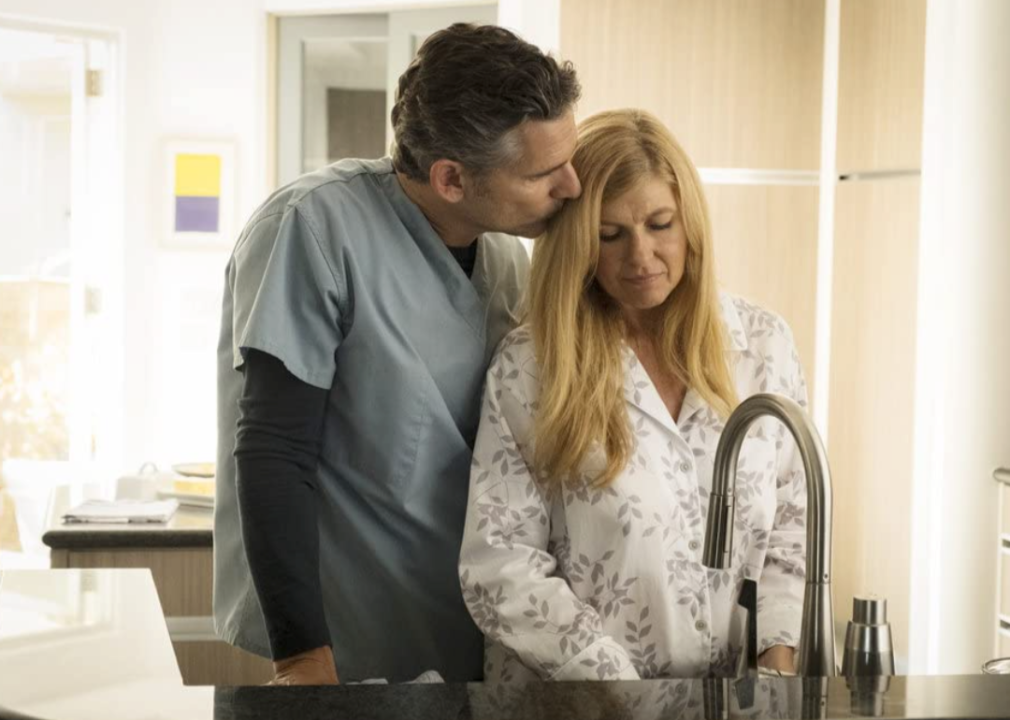 Based on true events, the Los Angeles Times podcast “Dirty John” explores how con-man John Meehan preyed on businesswoman Debra Newell and her family, leading to a cycle of abuse and deceit. Later, the podcast was turned into a USA Network series starring Connie Britton as Debra and Eric Bana as John. The show received numerous awards nods, including Critics Choice and Golden Globe award nominations for Britton. In “WeCrashed,” Jared Leto and Anne Hathaway play real-life couple Adam and Rebekah Neumann, the minds behind the famous coworking space business WeWork. The Apple TV+ series tracks the company’s growth over a decade, followed by the disastrous outcomes when the billion-dollar brand tanks over the course of one year. “WeCrashed” was adapted from the Wondery podcast “WeCrashed: The Rise and Fall of WeWork,” which similarly tracked how WeWork fell from its $47 billion valuation, and how Adam’s eccentric work as CEO played a role in the fallout.

You may also like: 100 best TV shows of all time 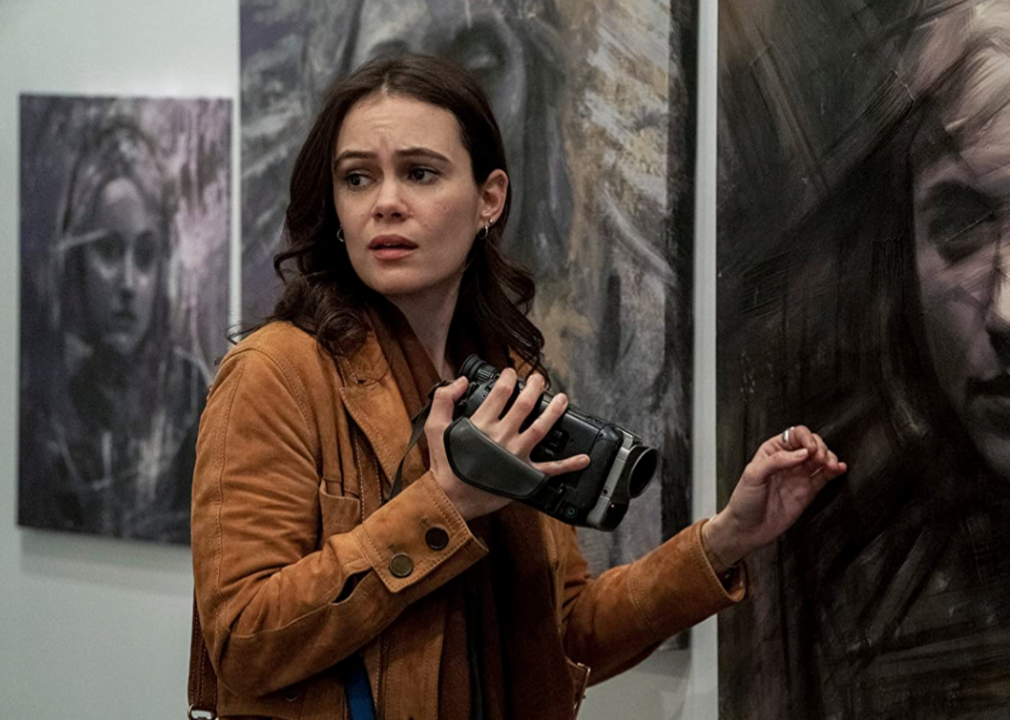 In “Archive 81,” archivist Dan (Mamoudou Athie) takes a job restoring fire-damaged videotapes that contain footage of grad student Melody’s (Dina Shihabi) documentary about an apartment building that burned down. In the process, Dan is unexpectedly pulled into a mystery involving a missing Melody and a nearby cult. The series was originally a horror podcast of the same name, although in the original story, Dan restores audiotapes instead of videotapes. 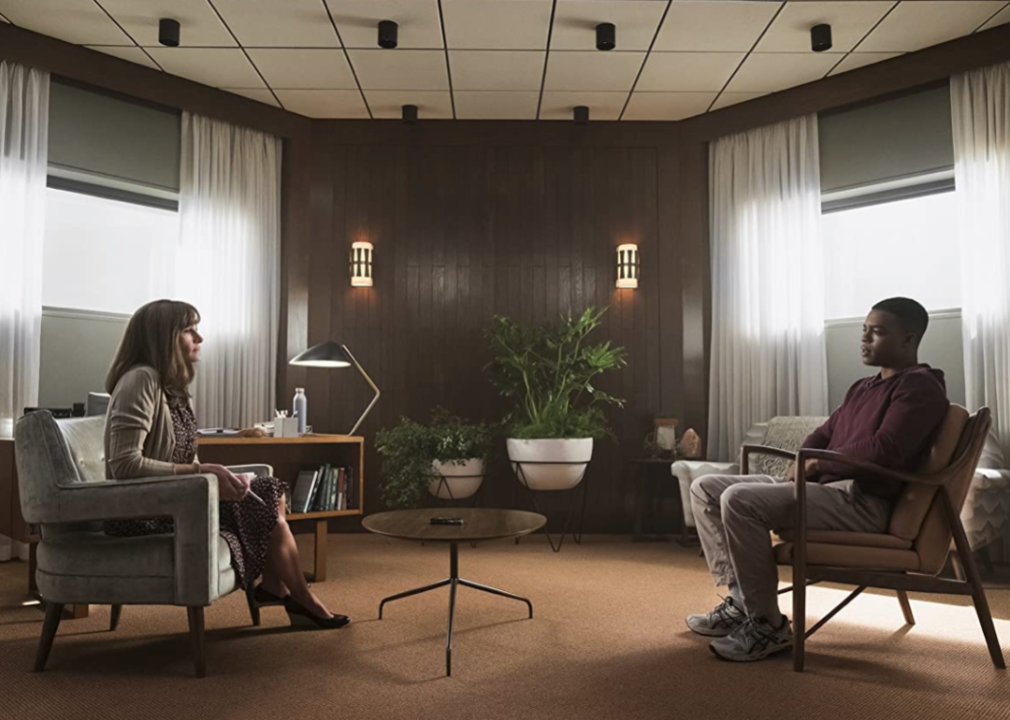 Prime Video’s “Homecoming” stars Julia Roberts as Heidi Bergman, a waitress and former social worker at a support center run by the shadowy Geist Group, which allegedly helps soldiers transition into civilian life. However, as Heidi’s memories of her work come back to her, she begins investigating the real story of the center. “Homecoming” was originally a podcast of the same name from Gimlet Media, featuring voice acting from stars Catherine Keener and Oscar Isaac. The podcast unfolds through a series of therapy sessions, phone calls, and more nontraditional storytelling methods. The TV series eventually received a second season starring Janelle Monáe, featuring a new story that is unrelated to the original podcast. 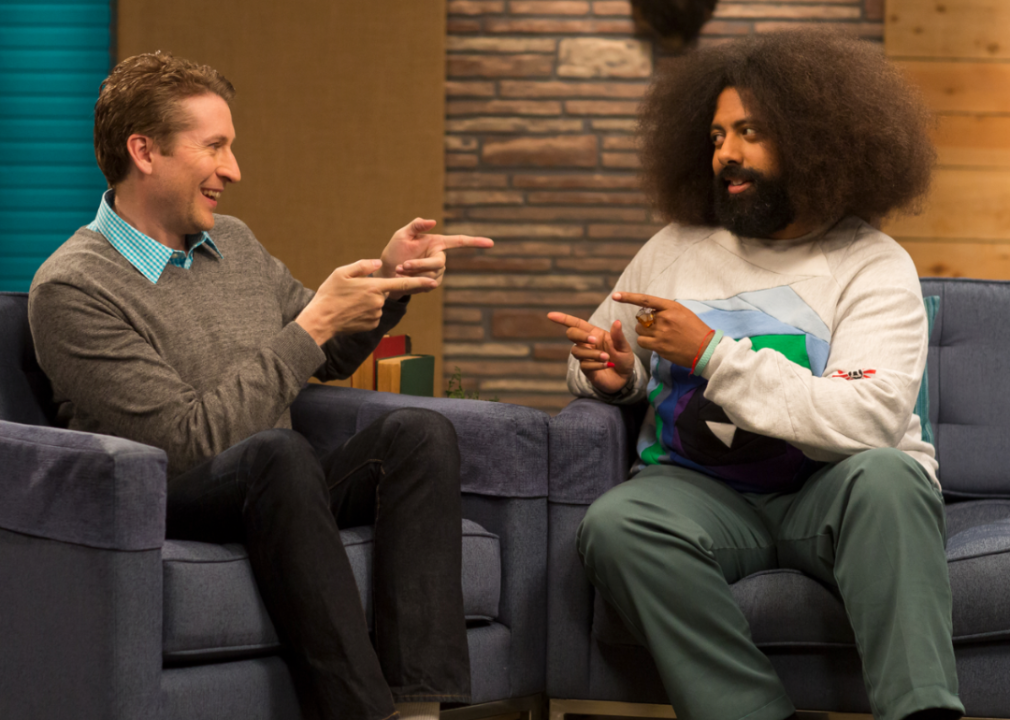 Scott Aukerman’s comedy series “Comedy Bang! Bang” consisted of a mock talk show which frequently spoofed late night tropes, often featuring celebrity guests. Paste Magazine’s Ross Bonaime called the series “one of the best written shows on TV today,” favorably comparing it to “Pee-wee’s Playhouse.” The original podcast operated on a similar level, and was also hosted by Aukerman. For the first two years of its run, it was titled “Comedy Death-Ray Radio.” 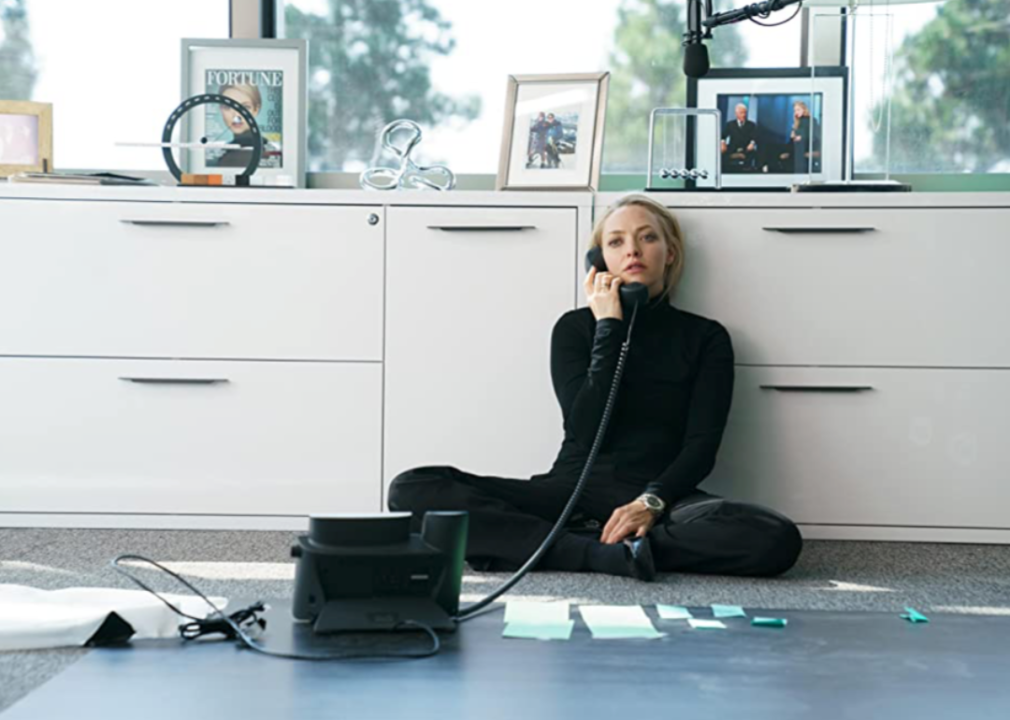 Amanda Seyfried plays Theranos founder Elizabeth Holmes in the Hulu miniseries “The Dropout,” which recounts the controversial Theranos founder’s rise and fall. The series went on to receive six Emmy nominations for the 2022 ceremony, including Outstanding Limited or Anthology Series and a Best Actress nod for Seyfried. While “The Dropout” is based on true events, it’s also adapted from an ABC News-produced podcast of the same name, which delved into how Holmes tricked investors into believing that Theranos’ technology could complete full blood tests with a single drop of blood. 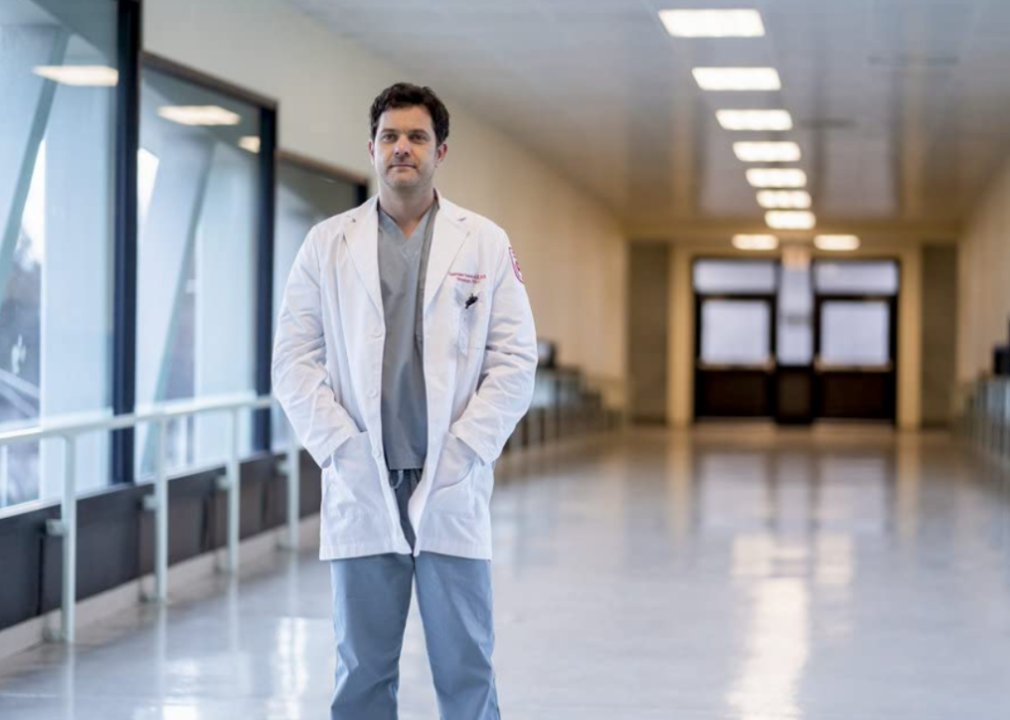 The Peacock drama “Dr. Death” stars Joshua Jackson as Christopher Duntsch, a neurosurgeon who became infamous for mutilating more than 30 of his patients. Entertainment Weekly‘s Kristen Baldwin gave the series an A-, saying the show “succeeds by focusing on the people who fought for years to make sure Christopher Duntsch could do no more harm.” The show was inspired by Wondery’s podcast of the same name, whose first season focused on the surgeon. 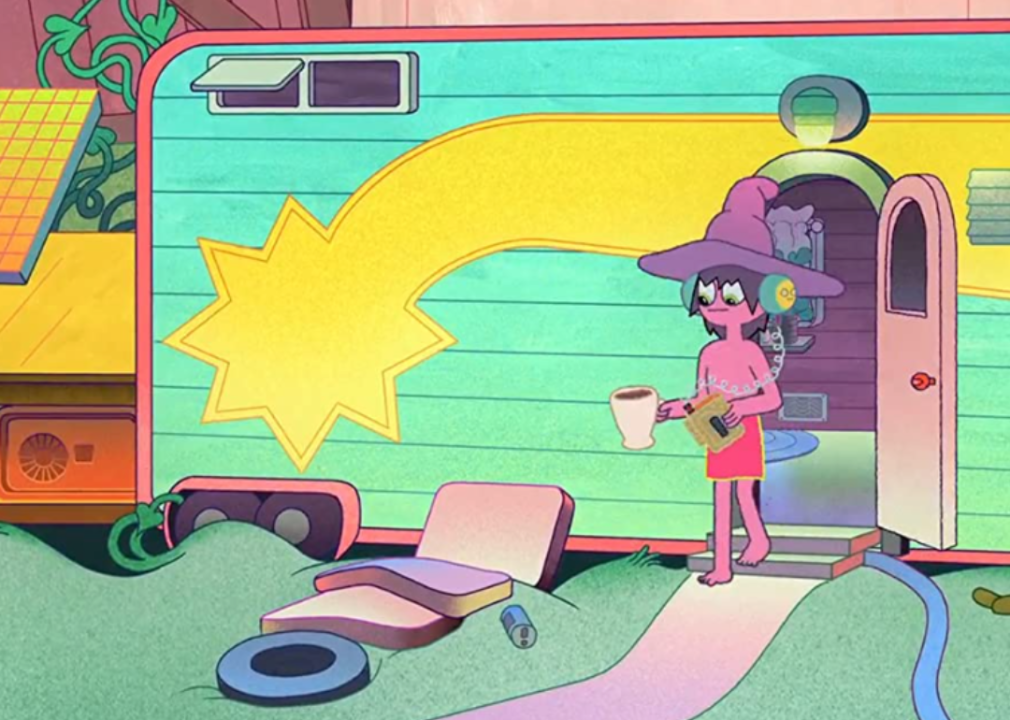 Set in a fantastical dimension called the Chromatic Ribbon, this Netflix animated series follows spacecaster Clancy Gilroy (creator Duncan Trussell) as he interviews inhabitants of various planets. The interviews come from episodes of Trussell’s podcast, “The Duncan Trussell Family Hour,” in which Trussell and a guest of the week “explore the outer reaches of the multiverse.” Although Rotten Tomatoes’ consensus praised the series’ “vibrant visuals and illuminating insights,” Netflix ultimately canceled the show after one season. 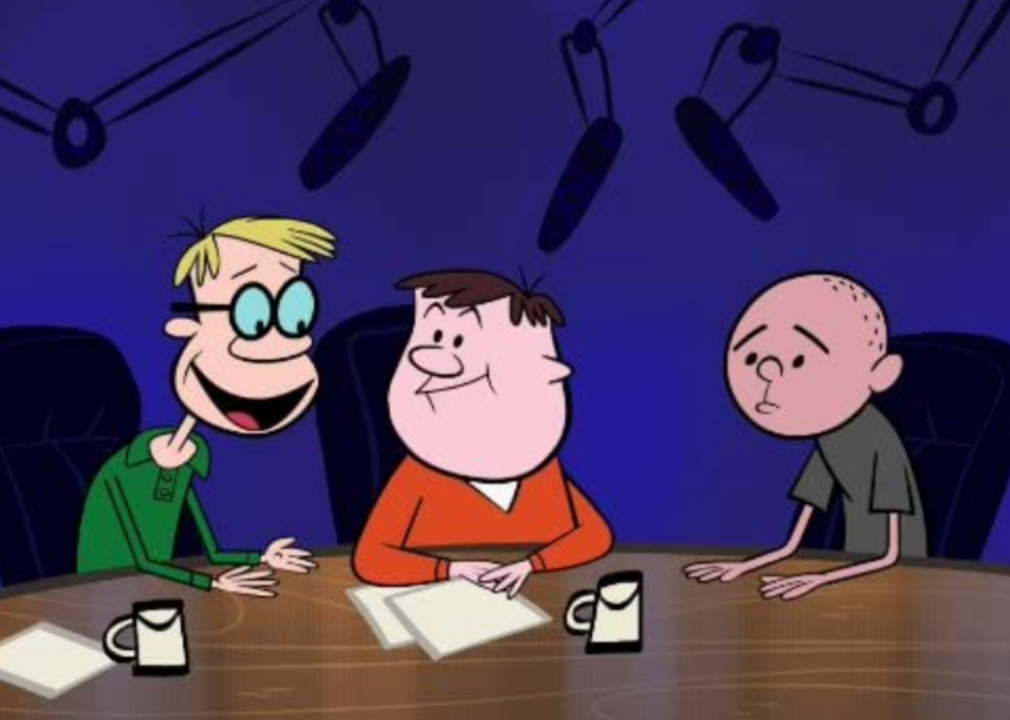 “The Ricky Gervais Show” is an animated comedy based on the titular comedian’s previous podcasts and audiobooks. Each episode features Gervais with friends and collaborators Stephen Merchant and Karl Pilkington humorously discussing various current events and everyday quibbles. The podcast edition broke a 2007 Guinness World Record for most downloaded podcast. By 2011, it had been downloaded more than 300 million times.