Number of monkeypox cases in Mississippi rises to 8, CDC reports 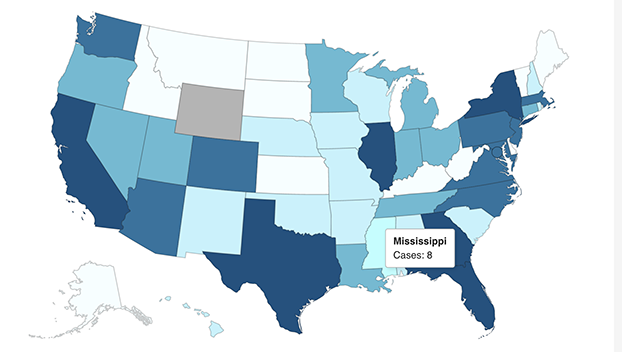 The Centers for Disease Control and Prevention count of monkeypox cases in the United States confirms eight cases of the disease in Mississippi.

A total of 10,392 monkeypox cases have been confirmed in the United States.

Leaders with the Mississippi State Department of Health (MSDH) confirmed the first case in the state on Monday, July 25.

Last week, the federal government declared a public health emergency to bolster the response to the monkeypox outbreak.

The announcement frees up money and other resources to fight the virus, which may cause fever, body aches, chills, fatigue and pimple-like bumps on many parts of the body.

The White House said it has made more than 1.1 million doses available and has helped to boost domestic diagnostic capacity to 80,000 tests per week.

The monkeypox virus spreads through prolonged skin-to-skin contact, including hugging, cuddling and kissing, as well as sharing bedding, towels and clothing. The people who have gotten sick so far have been primarily men who have sex with men. But health officials emphasize that the virus can infect anyone.

No one in the United States has died. A few deaths have been reported in other countries.

Leaders with the Mississippi State Department of Health (MSDH) confirmed the first case in the state on Monday, July 25. The CDC does not provide information about monkeypox cases by county at this time.