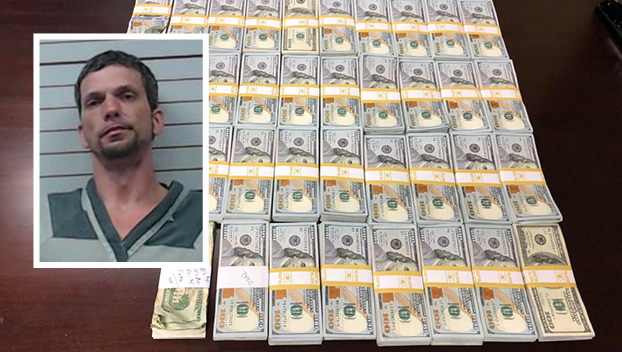 A Mississippi man was arrested after he found drugs and a bag containing more than $350,000 in cash during a traffic stop.

On Aug. 9, Lee County Deputies initiated the traffic stop on a vehicle in the City of Verona. A deputy made contact with the driver of the vehicle and identified him as Steven Lee Hall.

When Mr. Hall’s identification information was checked, it was determined he had outstanding arrest warrants in Lee County and was also wanted in Monroe County on felony drug charges.

Mr. Hall was placed under arrest for the outstanding warrants. During the inventory search of Mr. Hall’s vehicle, a bag containing over $350,000.00 in United States Currency was found. A felony amount of controlled substance was also found in the vehicle.
This is an ongoing investigation and more charges may be pending.

Hall, 40, of Guntown, faces charges Felony Possession of a Controlled Substance, Disorderly Conduct, Speeding and No Proof of Insurance.

A hold was placed on Hall for the Monroe County warrants.