Where school segregation is still happening across the US 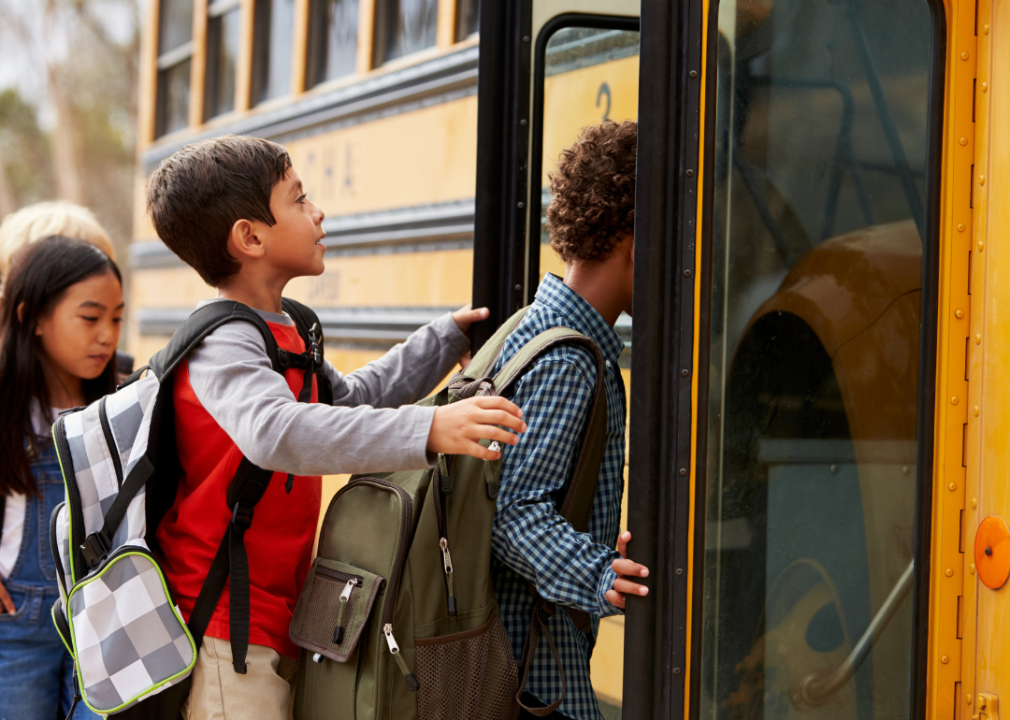 Where school segregation is still happening across the US

School segregation in the United States was officially outlawed in the landmark 1954 Supreme Court Case Brown v. Board of Education. And yet, more than 65 years later, its vestiges remain throughout the country.

While the U.S. student population has grown more diverse over the past decade, many schools remain segregated, according to a report released in June 2022 by the U.S. Government Accountability Office. A school system is considered segregated when students are entirely or substantially separated among or within schools on the basis of race, color, or national origin.

“Racial and economic segregation has increased quite a lot in the last 30 years,” said Ann Owens, professor of sociology and public policy and associate director of the USC Price Center for Social Innovation. “American schools have diversified, but really, segregation hasn’t changed that much.”

Integrated schools offer many benefits to students, including exposure to different cultures and races. Meanwhile, children who don’t interact with other kids who are different from them risk having their knowledge of other groups based on stereotypes and can foment hate. Desegregated schools have also proven to be more economically beneficial, reducing the school-to-prison pipeline and increasing employment.

Stacker examined data compiled and analyzed by researchers at the University of Southern California’s Segregation Index to see which parts of the country have the most and least segregated public and private K-12 schools and how those levels of segregation have changed over time.

The USC index measured segregation levels in Combined Statistical Areas, or CSAs, on a scale of zero to one, with zero meaning every school has the same mix of students and one meaning students of different races were enrolled in completely separate schools. A CSA consists of metropolitan and micropolitan areas with economic ties, which are measured by commuting patterns. (Note: The USC study used data from the U.S. Education Department for the 2017-2018 school year, the most recent available.)

You may also like: 25 of the best TV shows set in high school 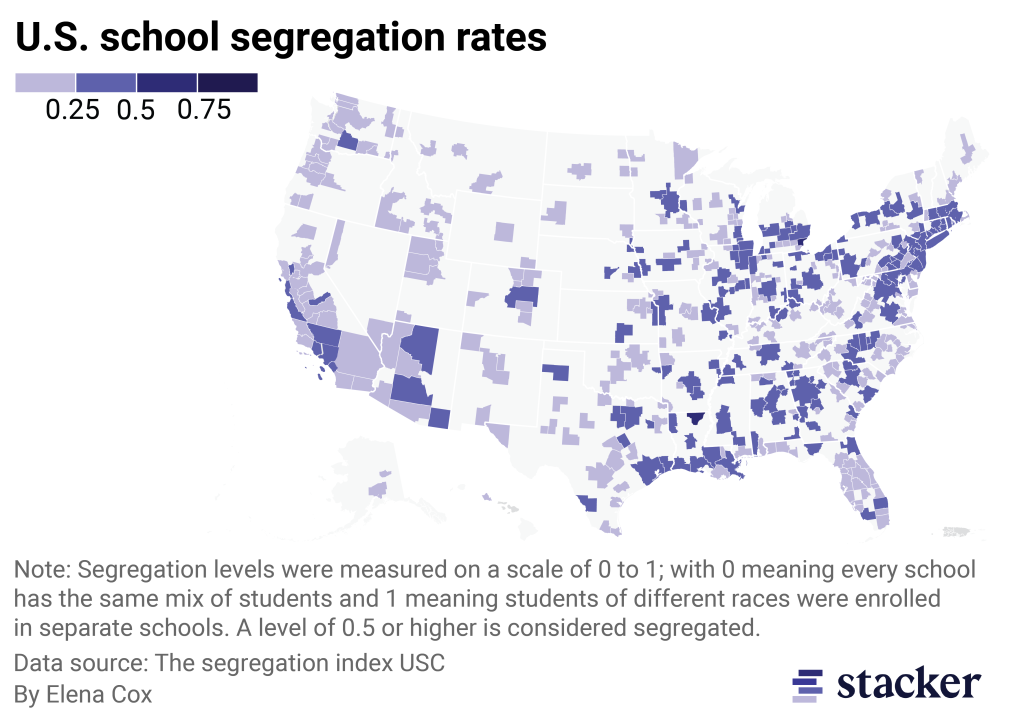 Where segregation is happening

There are more than 13,000 public school districts in the United States. And while some readers may think of segregation as a relic of the Jim Crow South, a surprising number of the most segregated areas in the country these days are located on the East Coast and in the Midwest. That’s because the Brown v. Board of Education decision outlawed legal segregation, which was mostly happening in the South. This did not encompass places with de facto segregation, such as redlined neighborhoods in major cities that were not overtly racially exclusive.

This isn’t to say segregation doesn’t still exist in the South. In 2010, the U.S. Justice Department found the Walthall County School District in Tylertown, Mississippi, had policies that resulted in “significant racial segregation among students.”

Another reason for the disparity is the way school districts are organized in Southern and Northern states. In the South, districts are comprised of counties, which are generally larger and have more diverse populations than the smaller municipalities of the Northeast. A lot of school segregation is due to divisions between districts, with children of different races going to different districts based on the city or town they live in.

“Any [legal] remedy of segregation has to be confined to the district that has been found guilty,” said Steven Taylor, an associate professor in the department of government at the School of Public Affairs at American University. “If there’s a segregated school within a county, you have a large area where you can desegregate the schools, unlike in the Northeast.” 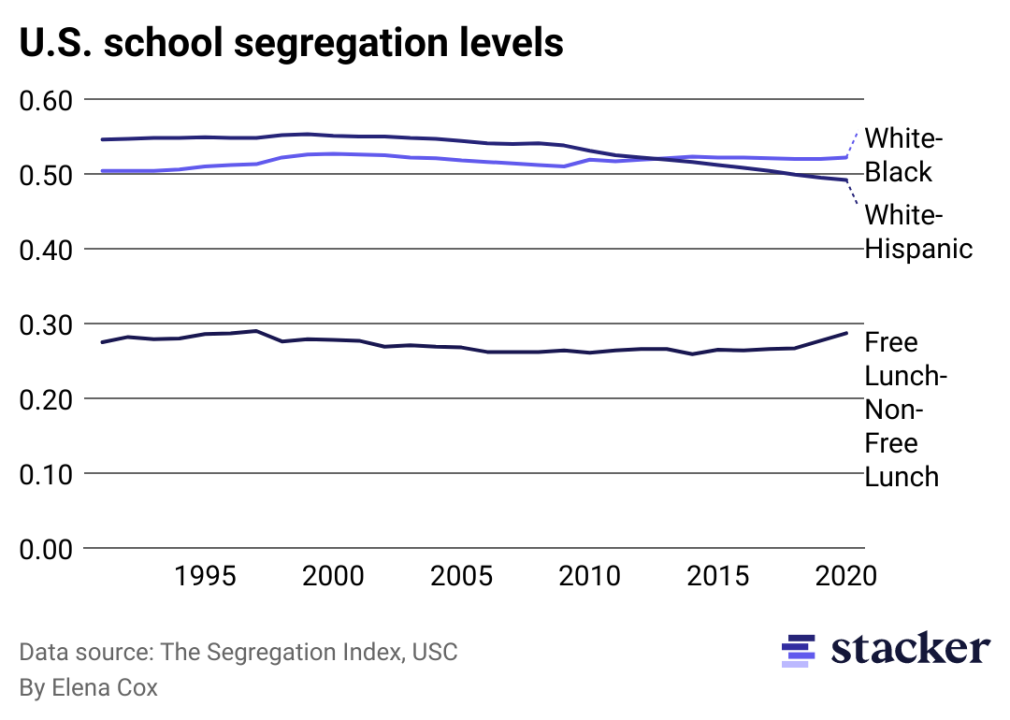 In the past 25 years, school segregation has remained relatively consistent

Little has changed with school segregation across the U.S. over the past 25 years, according to Segregation Index data. While the population has diversified, especially with the increase of Hispanic students, racial divisions were felt somewhat equally across districts, said Owens. For integration to occur nationwide, Owens says, predominantly white schools must become less white. But as federal courts have grown significantly less liberal in the last few decades, change at the national level seems less and less likely.

“When bussing for instance was proposed as a possible remedy [to segregation], that was a different time,” said Taylor. “Since then you’ve had federal judges and Supreme Court judges, the majority of whom have been appointed by [Presidents] Reagan, Bush, and Trump.”

Meanwhile, at the local and state levels, there’s been a lacking political appetite to take on the issue, especially among politicians and school board members seeking re-election.

“A lot of it has to do with negative feelings about their kids going to school with Black students,” Taylor said. “But they also don’t want resources taken out of their children’s schools and put into other schools.” 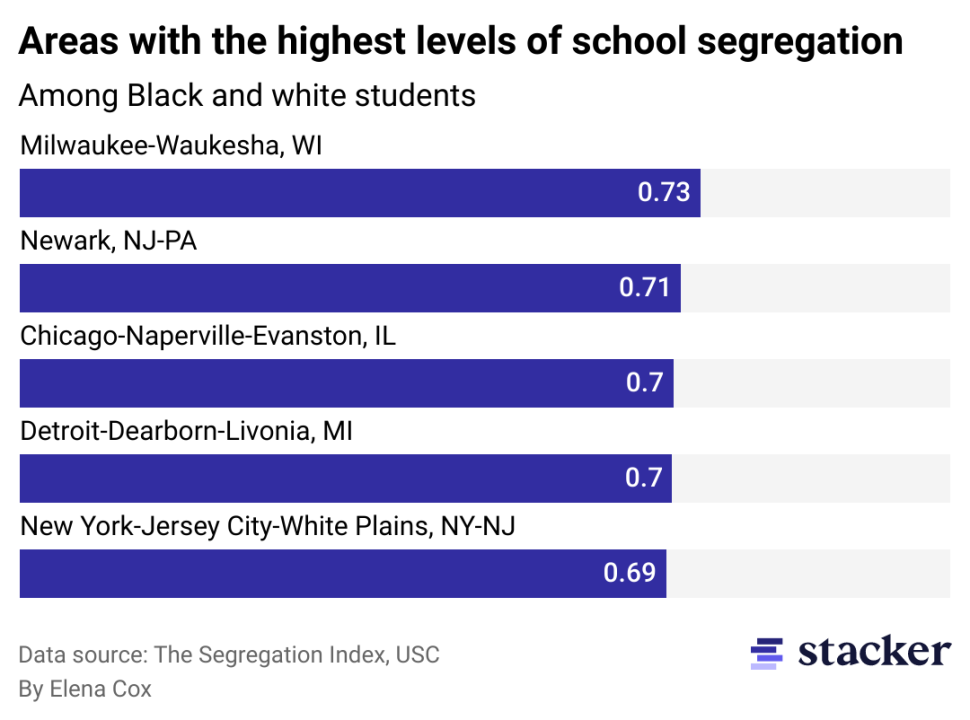 Segregation among Black and white students

The most segregated metro areas today are primarily located in places that became destinations for Southern Black people during the Great Migration from 1916 to 1970. The influx was met with violence and threats but also policies that deliberately kept them out of primarily white neighborhoods. Racial covenants—clauses inserted into property deeds to explicitly bar non-white people from buying or occupying land—became implemented throughout the Midwest and Northeast.

In Minneapolis—where George Floyd was killed by police in 2020, inciting massive nationwide protests—redlining was particularly rampant and segregation continues to this day. To date, researchers at the University of Minnesota have found more than 26,000 racial covenants in the Minneapolis area.

In Detroit, decades of white flight and the near-death of the auto industry have caused the city to shrink. Of the few public school students who do remain, many are Black. In Newark, New Jersey, while the city has become more gentrified, many white people moving in aren’t sending their children to public schools.

It’s a trend seen across the country, exacerbated by school closures during the COVID-19 pandemic. Enrollment in private elementary and secondary schools grew an estimated 9.3% from 2019 to 2020, according to the latest data available from the U.S. Department of Education.

“People of means are perhaps able to send their kids to a Montessori school and then eventually enroll their kids at a public school later, or move before it’s time to enroll in public schools,” said Jamel Donnor, a professor at the College of William & Mary who specializes in school desegregation and education policy. 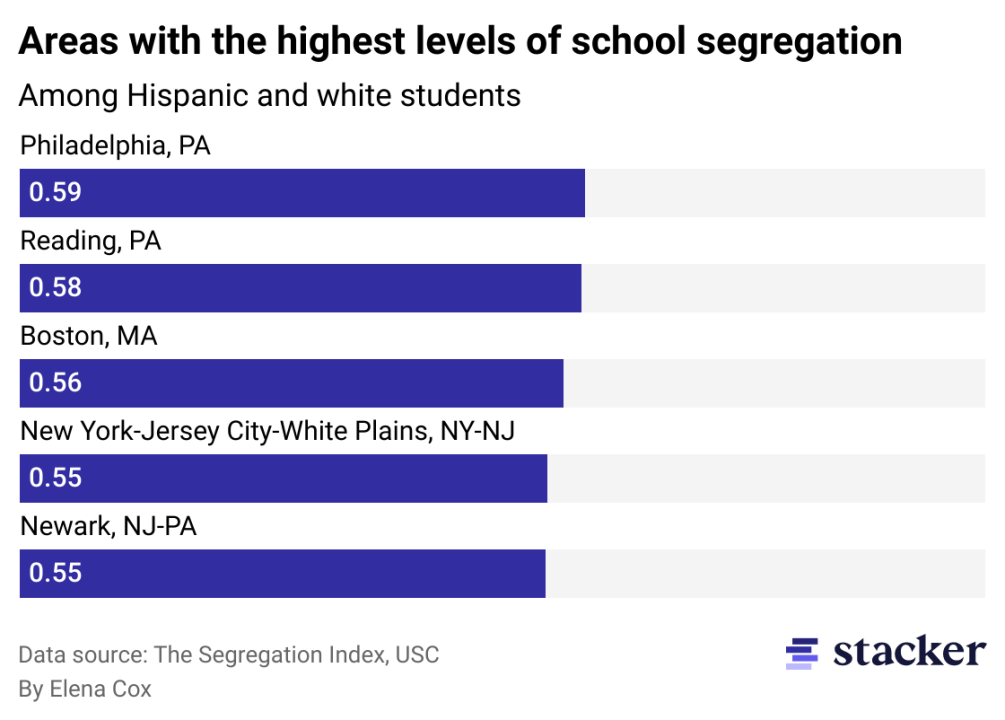 Segregation among Hispanic and white students

As the U.S. Hispanic population has increased significantly in the last few decades, USC researchers report the overall distribution has been relatively even nationwide. The most populous districts tend to have the most Hispanic students overall.

Similar to what’s happening in schools with large levels of Black segregation, metro areas with the most examples of Hispanic segregation are simply in places that have a high population of Latinos to begin with. In Pennsylvania, for example, the Hispanic population grew 46% from 2010 to 2020, according to the latest Census data.

“Some of it is due to residential segregation, whether through economic differences or zoning laws that don’t allow apartments in certain parts of cities,” Owens said. Immigration status can also play a role in where these students are living, further dividing students. 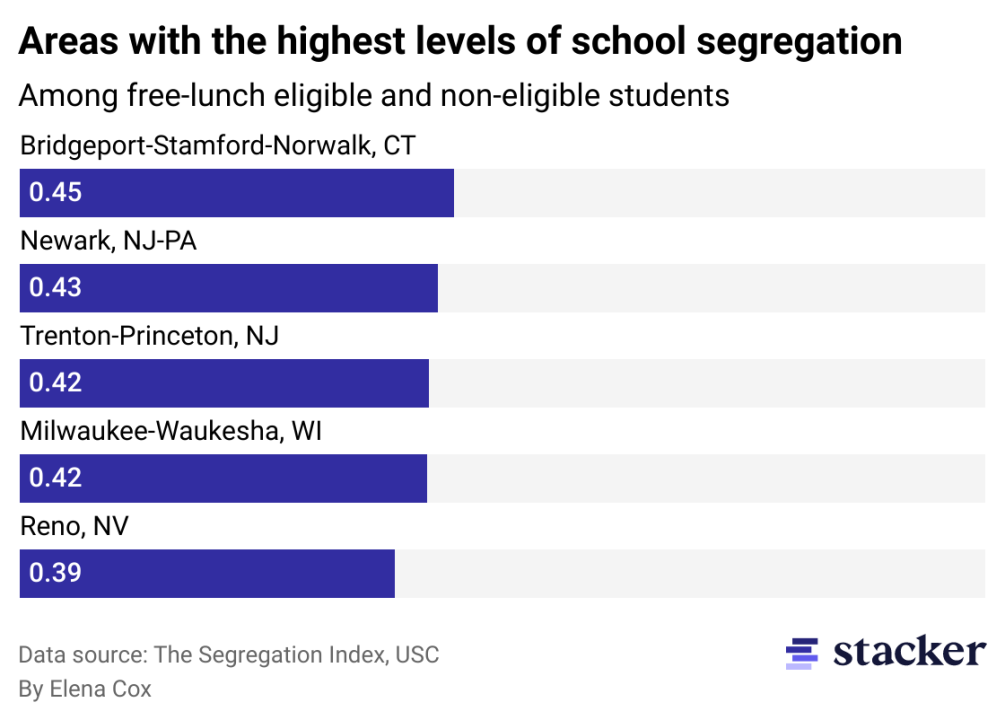 Segregation among students by income

While racial segregation remains a problem, economic segregation is actually trending upward, according to USC researchers. And since schools with higher levels of low-income students have fewer resources, it could make imbalances worse. “Racial segregation is just as much about resources as it is about income,” Owens said. “Kids come to school with resources attached to them, whether it’s family income or property values.”

It’s important to note schools with high poverty rates also tend to have more minority students. Across racial lines, 45% of Black students attend high-poverty schools, followed by 43% of Hispanics, according to data from the U.S. Education Department. For white students, that number was just 8%.