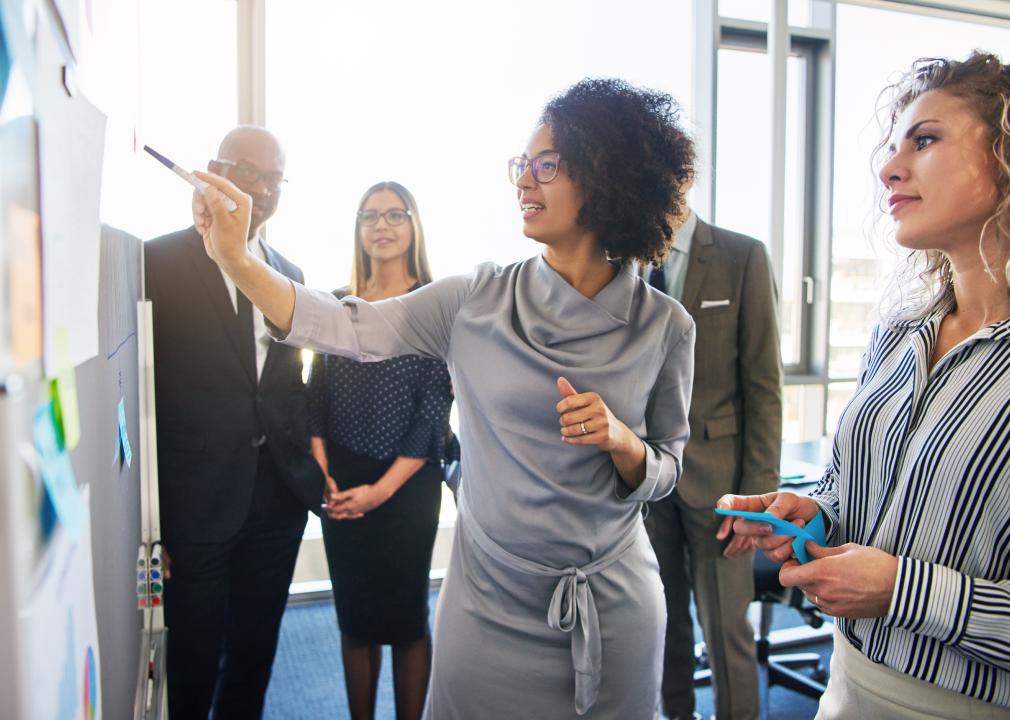 Increasing awareness of systemic and social inequities has spurred many Americans to take a hard look at the deeply rooted causes of discrimination and bias toward members of marginalized communities, including in the workplace. In recent years, companies have placed more emphasis on implementing diversity and inclusion initiatives.

To highlight how diversity policies are communicated in the workplace, JobSage compiled some of the most common terms found in the diversity, equity, and inclusion policies of dozens of companies ranging from nonprofit organizations to service and technology businesses.

While companies are increasingly understanding the importance of hiring and retaining employees with diverse backgrounds and experiences, there’s still a long way to go. Some companies have faced backlash and researchers have found that employees from overrepresented groups can react with hostility when diversity training is introduced. Research has shown this is a common reaction as traditionally advantaged groups are often initially resistant to the belief that they received advantages.

Meanwhile, nearly 25% of Black and Hispanic employees in the U.S. reported being discriminated against at their jobs, according to a 2020 study by the Gallup Center on Black Voices. The study also found that 3 in 4 Black employees said the discrimination they experienced was race-based. When it comes to leadership in the corporate workplace, Asian Americans are less likely than other racial groups to be advanced to management positions, per Harvard Business Review research. Latino and Hispanic Americans comprise 18% of the workforce but only 4.3% sit in executive roles, according to the Hispanic Association of Corporate Responsibility.

Many companies have introduced inclusivity policies to build office cultures that support the success of employees from all backgrounds—and the business itself. Deloitte reported that over a three-year period, companies with diverse teams had a significant increase in cash flow—2.3 times per employee. The research also identified key impact practices: View talent as an asset rather than just a cost and create and nurture an understanding of the employees from a qualitative perspective.

Understanding DEI is critical to introducing inclusive policies that can bring strength to the organization in terms of adaptability, innovation, and unique perspectives to the table. Read on to learn about some of the most common terms used to describe these policies. 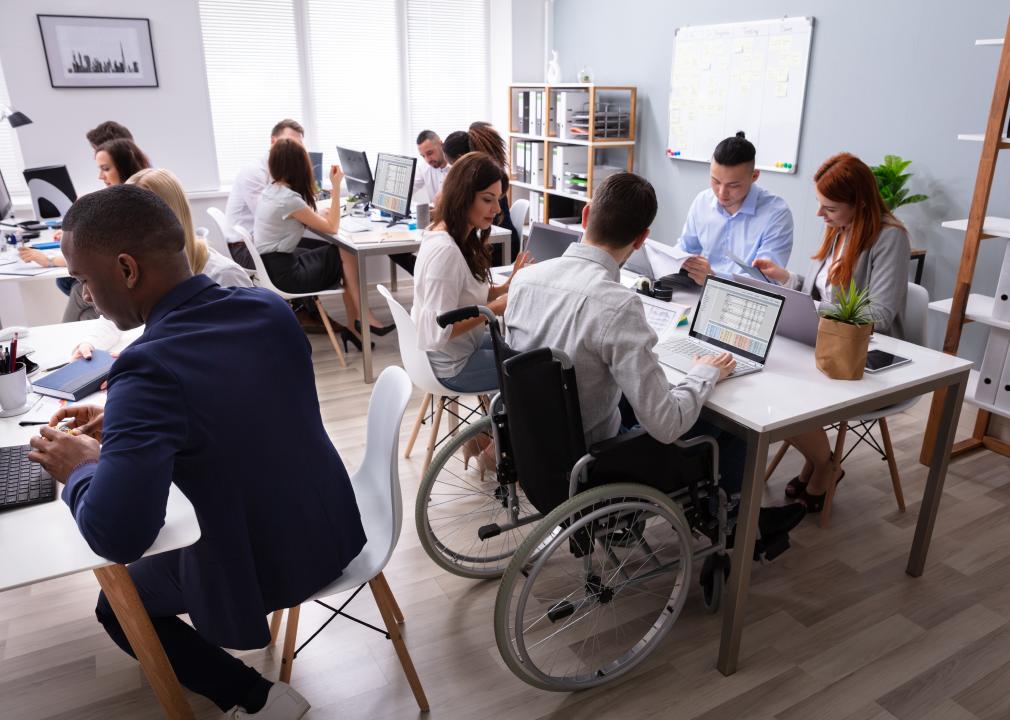 Diversity in the workplace refers to the presence of employees who have differences that may include race, gender, socioeconomic status, nationality, abilities, and more. Many often think of diversity in terms of characteristics that are noticeable, such as race, body size, or age. But the term encompasses other unseen differences that could include religion, sexual orientation, and cultural values. Having coworkers with varying backgrounds enriches a workplace, and organizations can implement mentorship programs and establish relationships with universities to grow a diverse pool of candidates during their recruiting process. 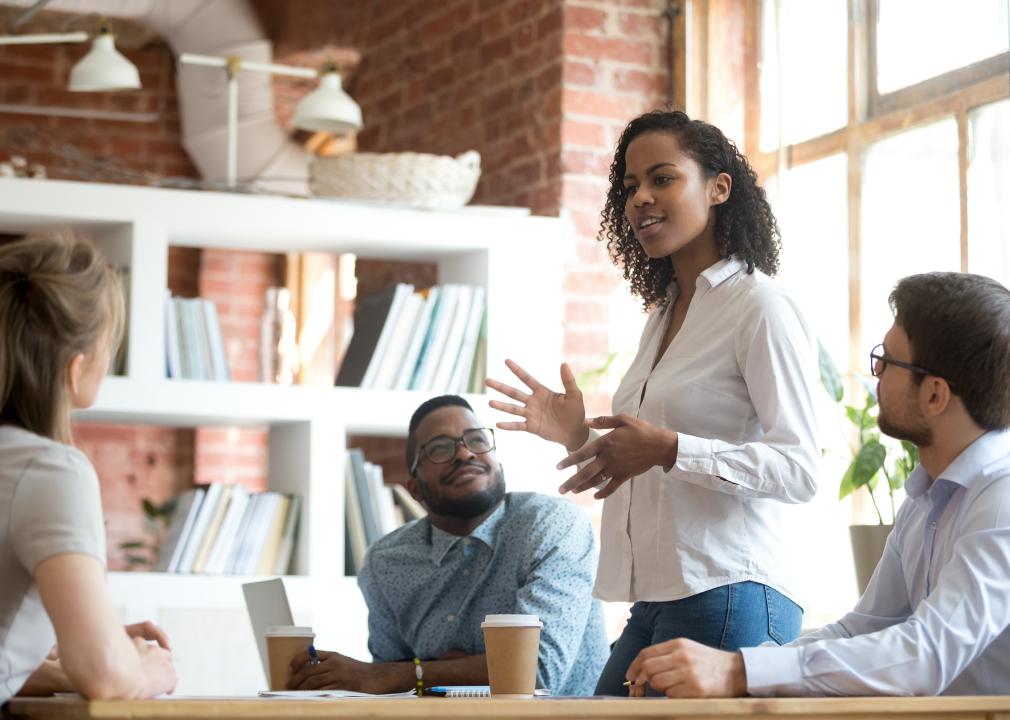 Equity is promoting more fair approaches within internal systems as well as in the way access, opportunities, and resources are distributed. When a workplace’s processes and procedures promote fairness and justice, all employees benefit. Understanding the underlying systemic biases in our social institutions is critical to identify which workplace procedures may be contributing to disparities in outcome and accessibility—and how to address them.

Equity is different from equality; with the former, companies will recognize each individual’s resources and privileges. Employees with less access to these may need more support that acknowledges specific barriers. This can mean prioritizing wage equity, systemic changes to remove barriers to advancement, and giving equitable promotions. Equality provides all employees with the same opportunities or resources regardless of barriers they may face. 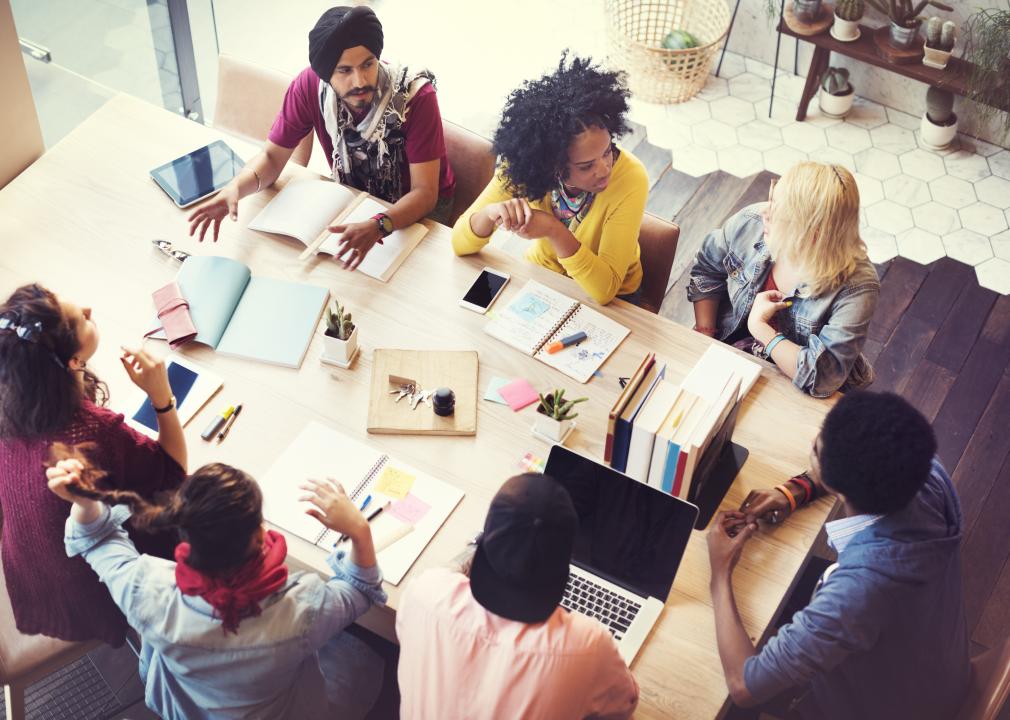 An inclusive work culture ensures each team member feels valued and respected. It also supports employee success and well-being by offering a welcoming work environment that provides a sense of belonging. To make strides in integrating more workplace inclusion, organizations should value different perspectives, which generally begins with the hiring process. A hiring manager must be cognizant of biased hiring patterns. Often, hiring managers recruit who they think will fit in with the other team members, rather than who they think will add to the team.

However, inclusion involves not only hiring job candidates with different backgrounds, but also ensuring these staff members have a pathway to promotion and senior-level roles. An inclusive culture also creates a welcoming space for everyone to share ideas. Race refers to a group of people who may share similar physical characteristics such as skin color. The concept of race came about in the 1700s when “racial classification schemes provided the most powerful framework for understanding the divide between white and black.”

Although theories of race at that time were erroneous, it still remains etched in the American psyche.

In the modern workplace, progress has been lacking in terms of equal salaries across race, gender, and sexual orientation. Although companies outwardly agree that diversity is important, women and minorities are still underrepresented when moving up the ranks, as white men continue dominating top executive and leadership positions at many organizations. 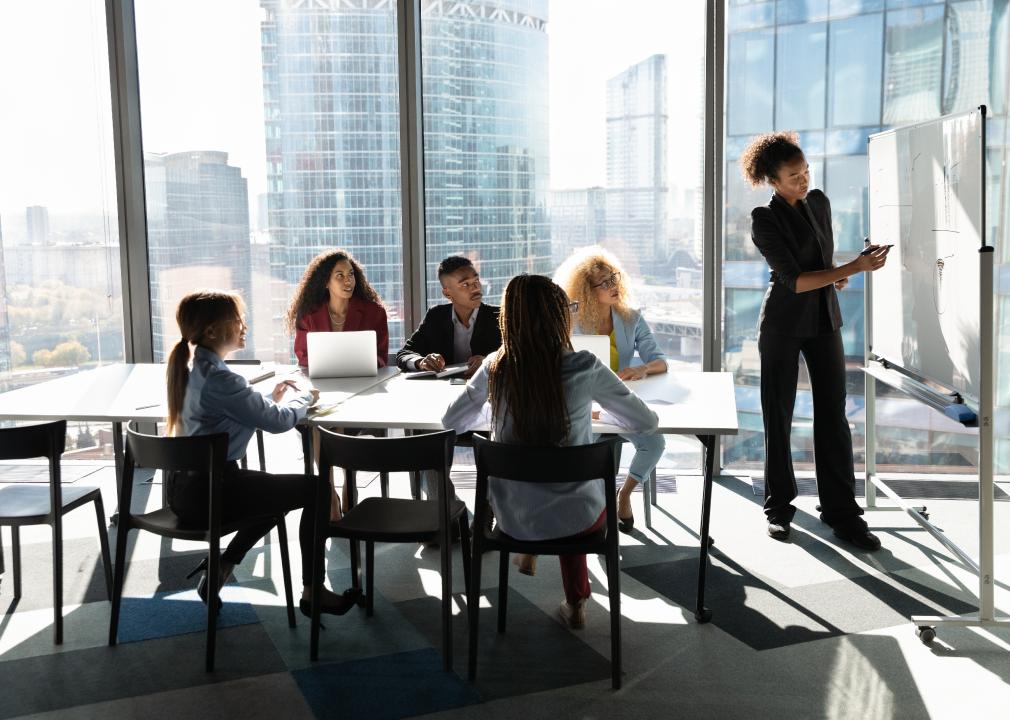 Ethnicity differs from race in that it acknowledges language and cultural differences between people. Ethnicity embodies social, political, and economic constructs. 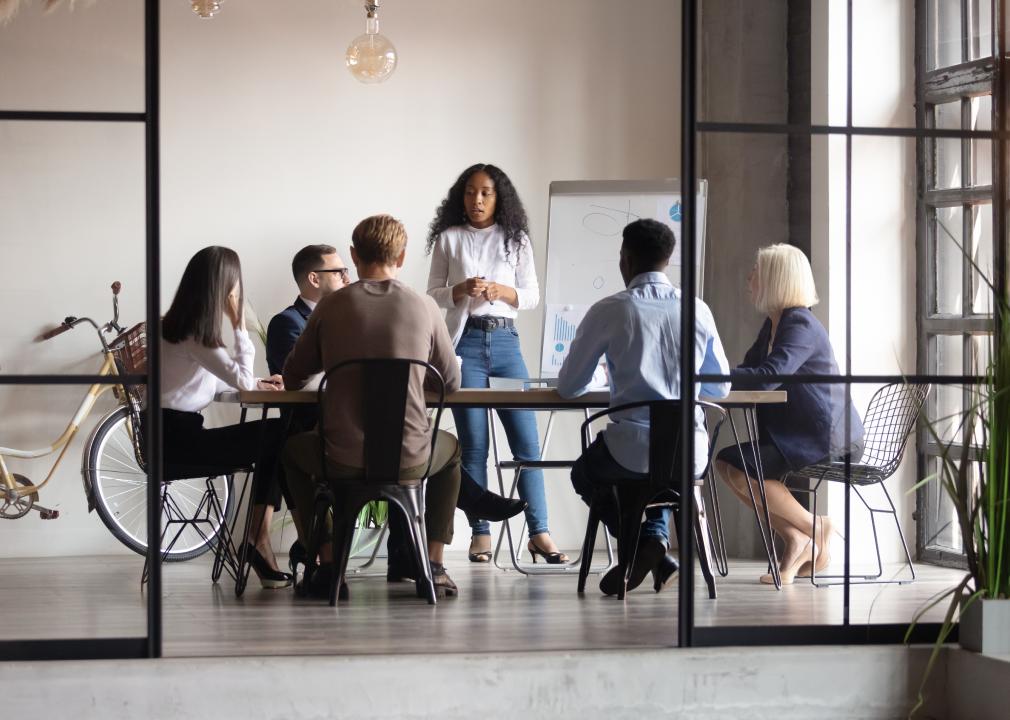 Intersectionality is the acknowledgment or framework for understanding experiences regarding discrimination against race, class, gender, or sexual orientation.

For example, in the U.S., women generally earn 83 cents for every dollar a man makes. However, the amount changes when you factor in another identity: Black women earn 64 cents for every dollar a white man makes. This example of intersectionality shows how a gender issue also becomes a race issue. Systemic discrimination and exclusion cannot be solved by homing in on a single issue, but rather by examining and understanding the different forms and layers of oppression that various individuals face. 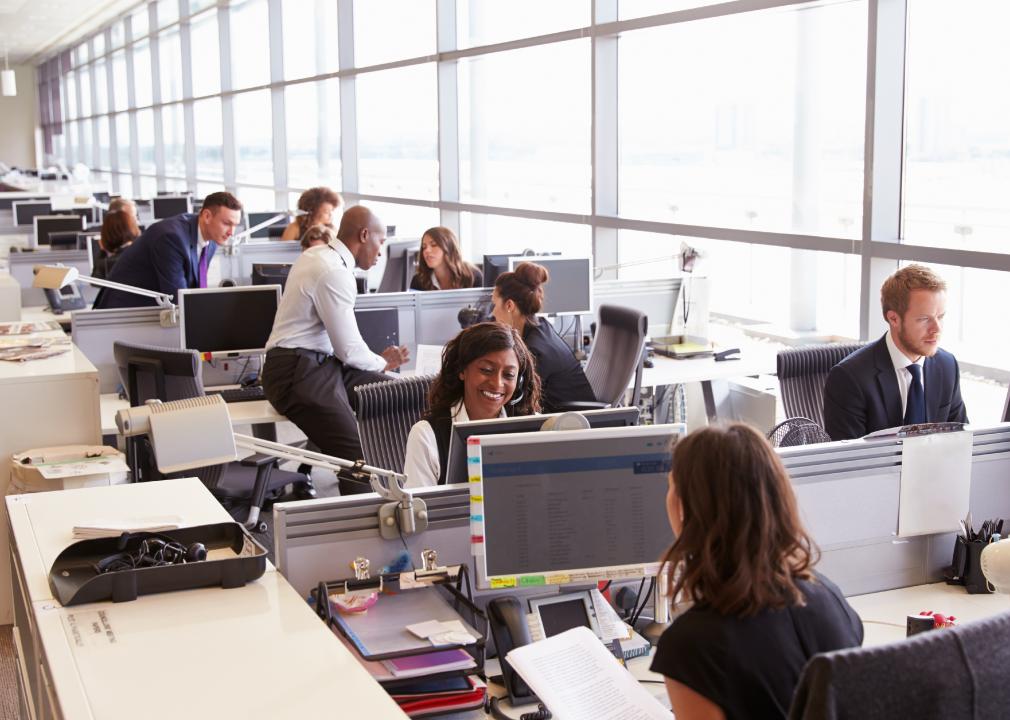 To function efficiently as a team, it’s important that employees learn to work with people from myriad backgrounds. This means employees must learn cultural tolerance when interacting with coworkers.

Diverse backgrounds and perspectives can result in an occasional misunderstanding, so it’s important that employees know how to handle this. Some methods of fostering cultural tolerance can include encouraging collaboration and conversation so everyone feels like their differences are respected. Welcoming and acknowledging ideas and differences of opinion is also critical. This doesn’t mean that all suggestions need to be accepted, but the employee will feel more comfortable if they know their ideas are at least being considered and not dismissed or ridiculed. 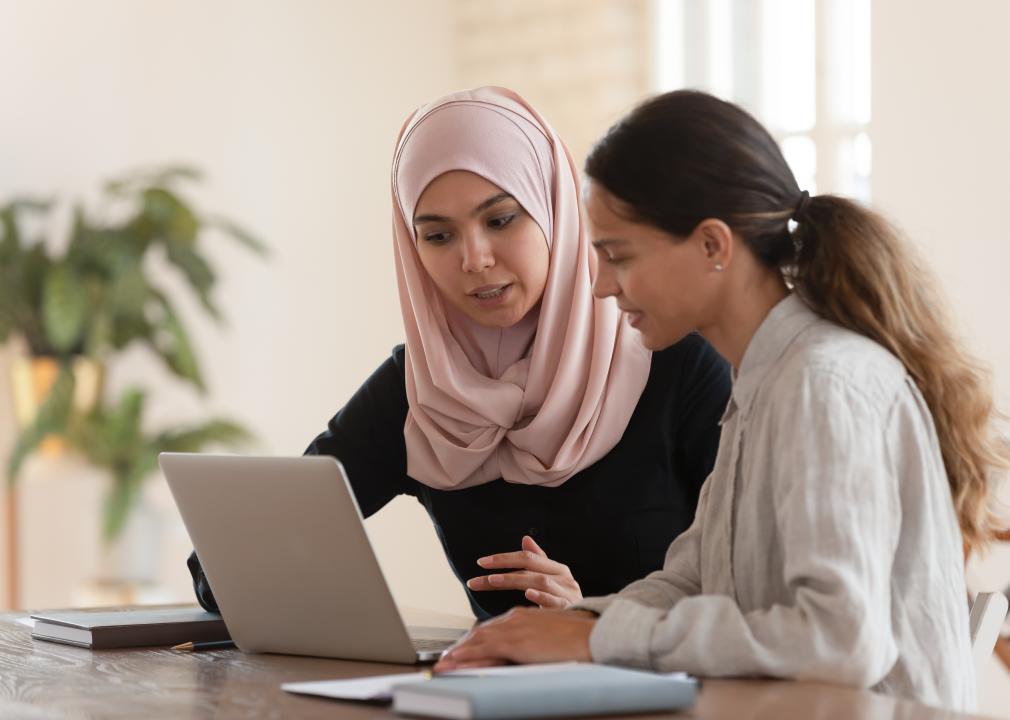 Everyone’s input in the workplace is required for creating a diverse and inclusive work culture. This can be done by assessing and asking for feedback on workplace culture from team members in person or through anonymous surveys.

This can also mean that managers need to take more initiative to advocate for employees who may not be in a position to do so for themselves. Promoting pay equity, providing equal opportunities for promotions, and standing up for employees who express concerns about harassment, unfair treatment, or other discrimination in the workplace.

It also entails being open to differing opinions, having an open mind about employees’ communication styles, handling conflict, and identifying obstacles within the organization that block steps toward a more diverse, equitable, and inclusive work culture. 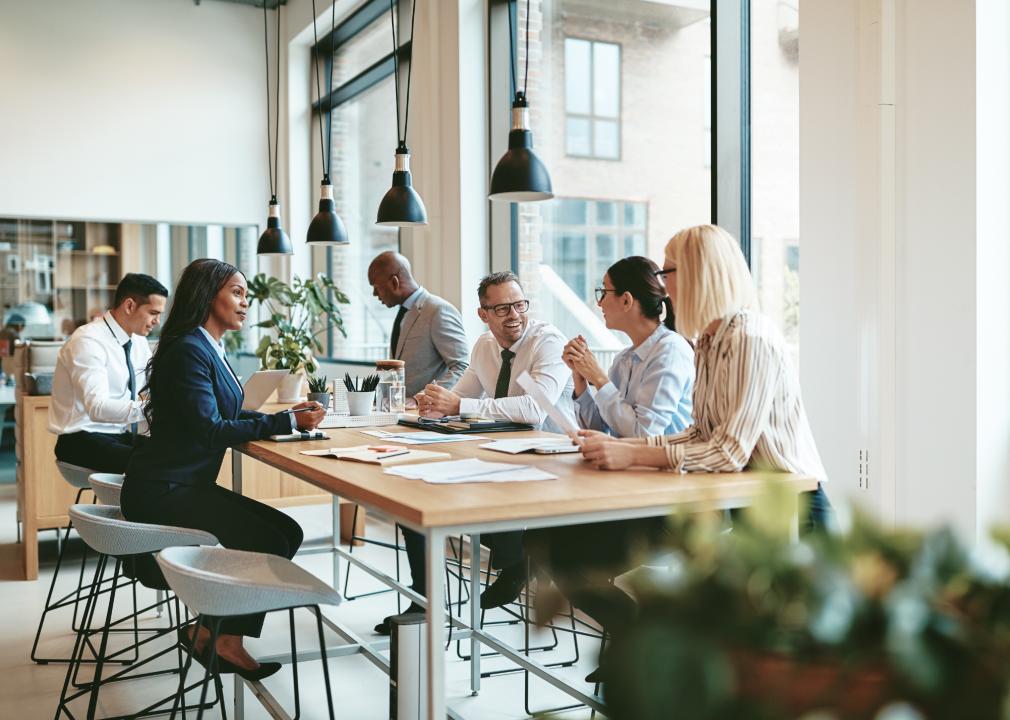 Any form of harassment can make someone feel very uncomfortable. Harassment in the workplace however takes on many forms, whether it’s bullying, microaggressions, or blatant discrimination.

In recent years, the #MeToo movement has shed light on sexual misconduct and other incidents of harassment in the workplace, prompting employers to focus on workplace anti-harassment and bias training.

The rise in remote work due to the pandemic hasn’t eased the number of workplace harassment cases. Teams can now take a virtual peek into their coworkers’ homes, intimate details that they likely didn’t have access to previously. Remote harassment can refer to inappropriate language or microaggressions online.

The Department of Labor procedures encourage prompt reporting and remedying of workplace harassment. After filing a harassment claim to the employee’s human resources department, the claim is evaluated, and a decision is made regarding disciplinary action. 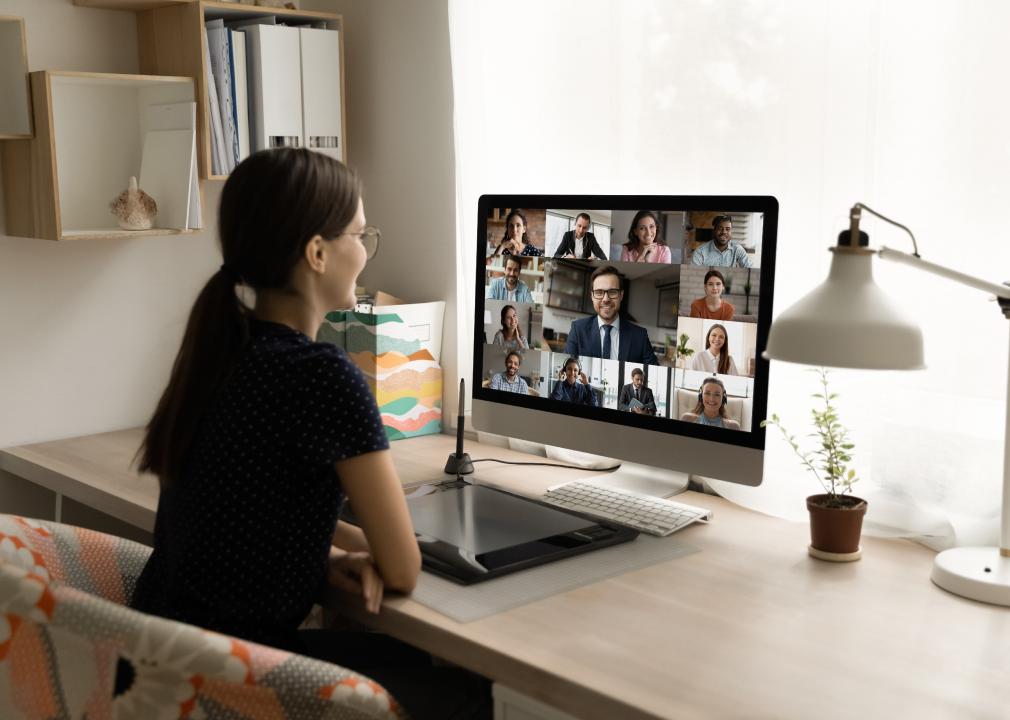 Implicit bias refers to stereotypes, attitudes, or unconscious bias that someone may have against a person or group. This can lead to unfair decisions that can hinder a person’s intentions or choices regarding who gets hired or promoted. Unconscious bias isn’t illegal; however, employment discrimination is illegal.

Employment discrimination happens knowingly whereas implicit bias occurs without us being aware of it because it is usually learned behavior over time. Implicit bias can manifest in ways that can negatively affect the team or company overall. If left unaddressed, this can lead to tension whether in the office or over Zoom.

There are various tools to tackle implicit bias such as unconscious bias trainings, as well as listening to employees and encouraging them to express their opinions and concerns. It’s also important to avoid stereotypes and to be mindful of how your thoughts and emotions may be based on previous experiences, instead of the person or situation at hand. If employers only hire people who think or look like them, this can reaffirm biases, affecting team morale and productivity.

This story originally appeared on JobSage and was produced and
distributed in partnership with Stacker Studio.