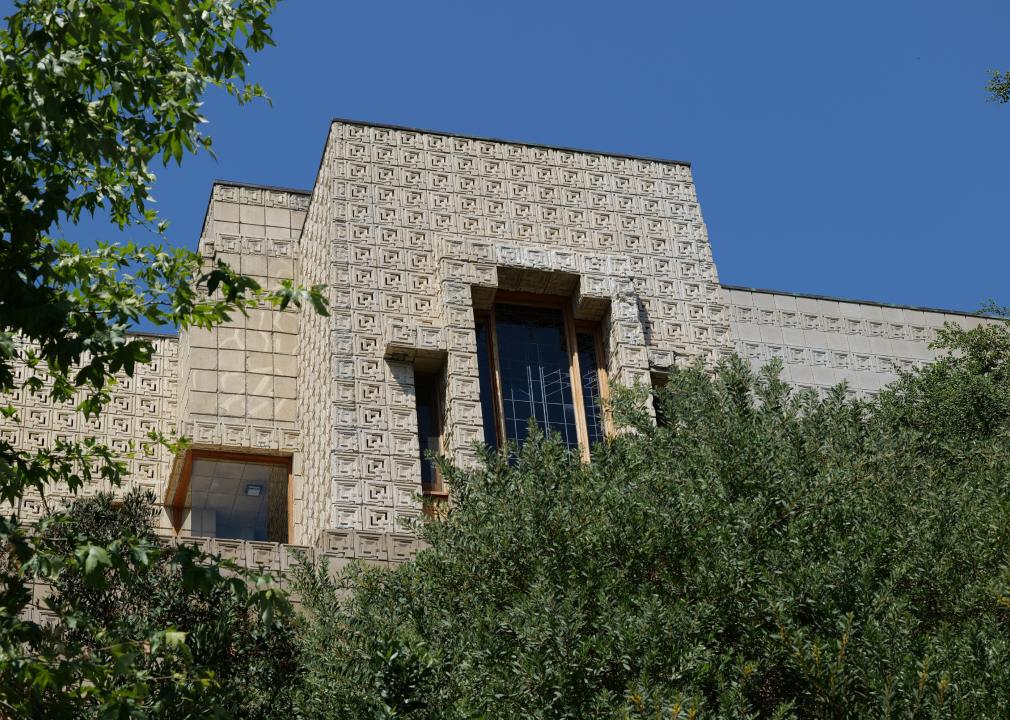 Science fiction films can transport viewers to another place and time, not to mention different dimensions. There’s no greater thrill than going along for the ride as characters warp reality and discover universes beyond our human reach, but true fandom often leads to seeking out film elements that exist in real life. And it’s in the City of Angels where many of the biggest sci-fi film scenes were made possible.

Hardcore sci-fi film buffs will tell you that nothing beats eating lunch at the same booth where a famous actor once delivered an earth-shattering speech or standing in the very spot where a mere mortal saved the world. Los Angeles is home to an abundance of these cinematic backdrops, from immediately recognizable movie sets of the past to ordinary destinations that are easily accessible to the public today.

Pass through Griffith Park and head near the north end of Canyon Drive and you’ll find the Bronson Caves, which true-blue lovers of the Caped Crusader will instantly recall as the gateway to Batman’s Batcave from the 1960s TV series. And it’s hard not to get lost in “Terminator” and “Blade Runner” nostalgia driving through downtown’s gleaming, 1,500-foot-long 2nd Street Tunnel.

These are just a handful of locations throughout LA where sci-fi movie magic was made. For that reason, Giggster looked at noteworthy shooting locations you can visit from the best sci-fi movies shot in the Los Angeles area. To qualify as one of the best, the film had to have at least a 7.5 user rating on IMDb. 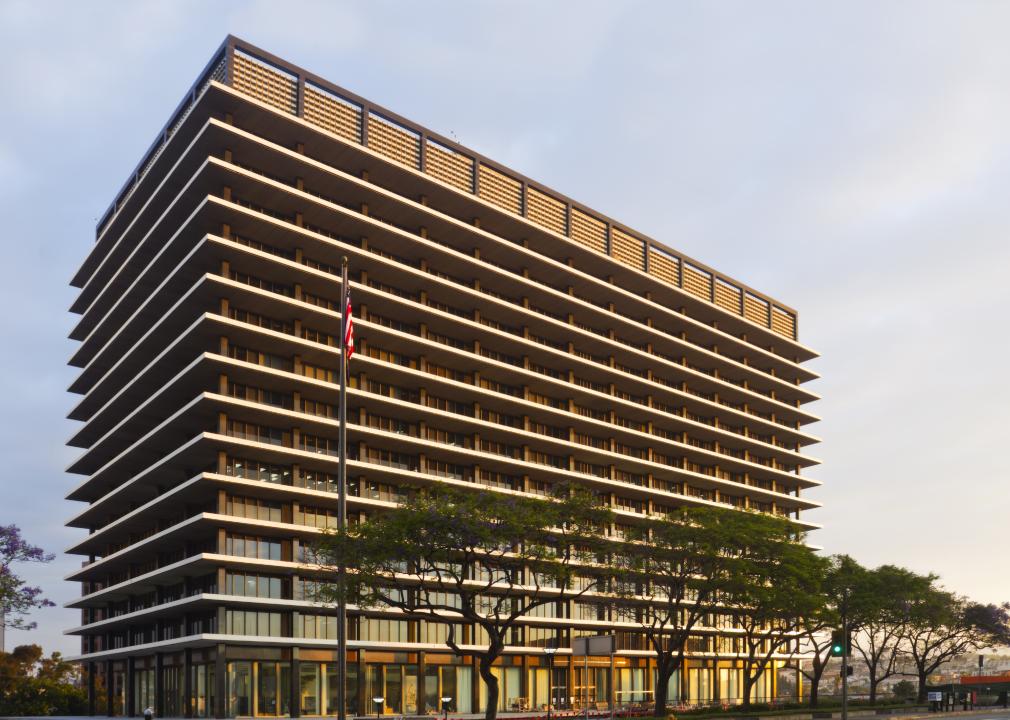 The dream city submerged in water in ‘Inception’

In this Christopher Nolan-directed film, Dom Cobb (Leonardo DiCaprio) engages in espionage using technology that allows him to invade the dreams of corporate bigwigs. The John Ferraro Building appears in a scene where Cobb and Ariadne (Elliot Page), an architect graduate student who designs dreamscapes, enter a virtual world—or “dream city”—Cobb created with his now-deceased wife, Mal (Marion Cotillard).

While the John Ferraro Building is often used as a film location, it is the real-life headquarters of the Los Angeles Department of Water and Power. The Albert C. Martin and Associates-designed building opened in 1965 and was later renamed after the late Los Angeles City Councilman John Ferraro. The water feature seen in “Inception” is actually used as part of the LEED gold-certified building’s air conditioning and heating system.

Other film scenes in which the Ferraro Building has been featured include as a parking garage in 1984’s “The Terminator,” a drop point in the crime comedy “The Nice Guys,” and a stand-in Washington National Hospital in the “X-Files” episode “All Things.” 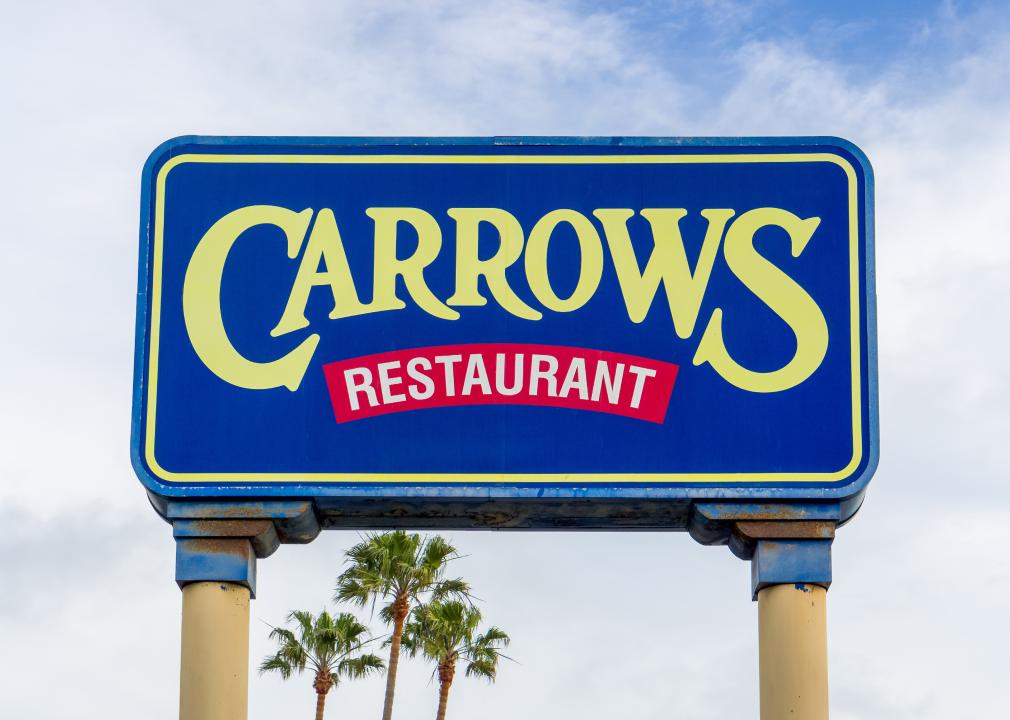 Big Jeff’s in ‘The Terminator’

Founded in 1970 as Carrows Hickory Chip restaurant, this classic diner is still going strong. Want to drop in for lunch? Just don’t expect Burley Beef to be delivered by Sarah Connor. In James Cameron’s 1984 sci-fi classic “The Terminator,” Sarah (Linda Hamilton), the future mother of John Connor, the man destined to save humankind, holds down a waitressing gig at Big Jeff’s Restaurant, for which one of the four Carrows in Southern California was used, this one, in particular, was on South Pasadena.

Though Carrows doesn’t seem to have been featured in any movies since the first “Terminator,” it’s still open from 6 a.m. to 9 p.m. for your dining pleasure. Oh, and there’s no burger-eating statue outside. 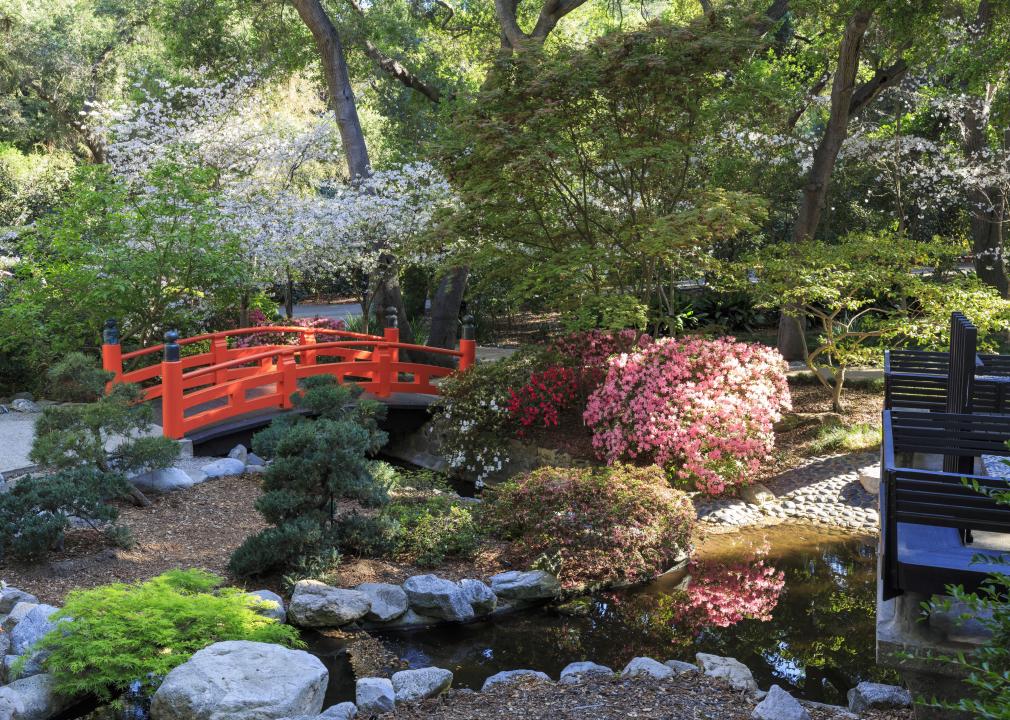 The greenhouse from ‘Minority Report’

“You’re trespassing. I don’t have visitors.” This is how Dr. Iris Hineman (Lois Smith) greets John Anderton (Tom Cruise) when he enters her greenhouse unannounced. It’s the year 2054 A.D., and Anderton, the chief of Washington D.C.’s Department of Precrime, has been identified as someone who is set to commit a future murder and is at risk of being “haloed.” He beseeches Hineman, one of the creators behind Precrime technology, to help him. Hineman’s advice: Find the minority report.

While visiting Hineman’s magical greenhouse isn’t possible—with its slithering and sometimes lethal plants—the Descanso Gardens setting in La Cañada Flintridge is open to the public and equally magical unto itself. Visitors can get an overview of the gardens via the Enchanted Railroad, a 1/8-scale replica of a diesel train that chugs through the gardens. Afterward, a stroll through the ancient forest or an exploration of the Japanese Garden’s teahouse is possible, and visitors will be treated to the sight of many of the state’s indigenous plants at the California Garden. There is one time each year that Descanso Gardens goes otherworldly—during its annual Enchanted Forest of Light held each November to January. 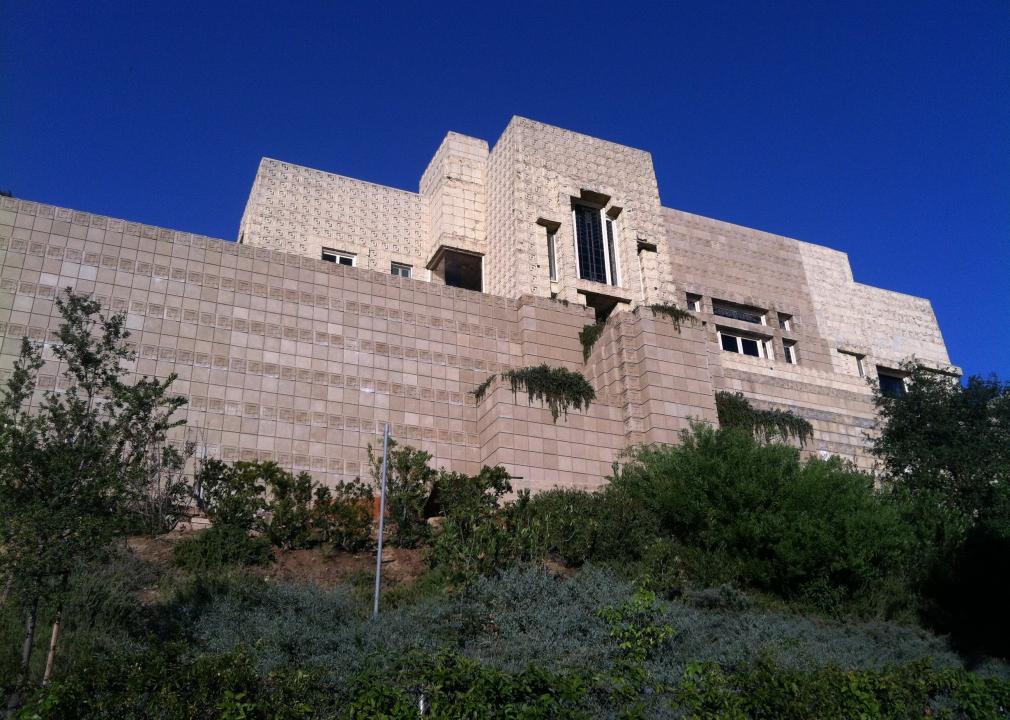 Ridley Scott broke ground with 1982’s “Blade Runner,” creating futuristic settings that both elevated the film’s futuristic setting and grounded it in the grit and grime of a contemporary city. The film showcased a few notable LA spots, among them the Bradbury Building and Union Station, which served as a police station in the film. Another such location was Ennis House, the apartment exterior for Rick Deckard (Harrison Ford), the story’s blade runner.

The Frank Lloyd Wright-designed home was built in 1924 for Charles and Mabel Ennis. The three-bedroom, three-bath house has sprawling views across LA on a hill in Los Feliz. The iconic Mayan Revival architecture style structure is iconic largely due to the specially crafted concrete blocks used in its construction. It’s listed on the National Register of Historic Places.

Sci-fi fans will recognize the Ennis House from a plethora of other entertainment projects, among them the films “Predator 2,” “The Thirteenth Floor,” and the 1959 horror classic “House on Haunted Hill,” and ’90s television series like “Buffy the Vampire Slayer” and “Twin Peaks.” 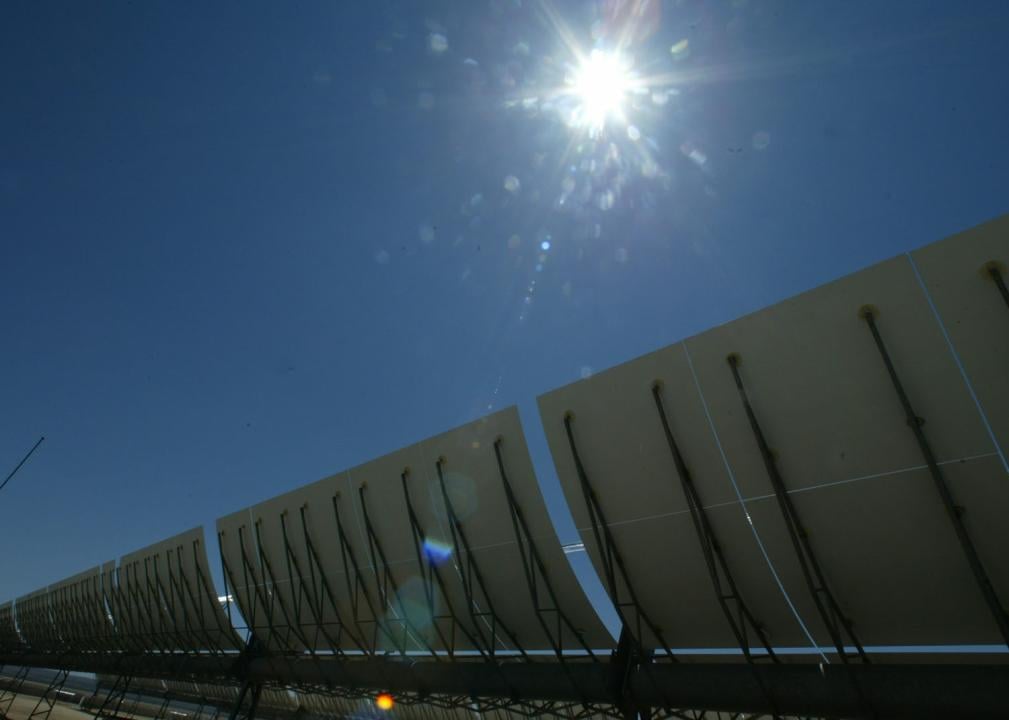 The solar farm in ‘Gattaca’

“Come on! We’ll miss it!” Irene (Uma Thurman) hastens her Gattaca Corp. co-worker Jerome (Ethan Hawke), aka Vincent, to sprint through traffic (despite the fact that he cannot see due to myopia) and join her in a hidden location. Together, they enter a closed-off solar farm. As first-date settings go, they don’t get much more romantic than a solar farm when the light is just right.

The location of that first date is the Solar Energy Generating System III-VII project, a solar and natural gas facility located in the Kramer Junction area of San Bernardino, California. Set on 1,000 desert acres, SEGS III-VII began producing energy in 1989 for Southern California Edison, an electricity supply company. As of 2022, it has been decommissioned by the California Energy Commission.

Though audiences never know the fate of Irene and Vincent’s romance, actors Thurman and Hawke met on “Gattaca” and married the following year. They would go on to have two children, one of whom may be known to any fan of “Stranger Things.” Maya Hawke took home the Academy of Science Fiction, Fantasy & Horror Films’ 2019 Saturn Award for Best Supporting Actress in Streaming Presentation for her role as Robin Buckley on the Netflix series.