Just how strange is MLS’ weirdest rivalry? Behind the eyebrow-raising trend of the Portland-Seattle derby 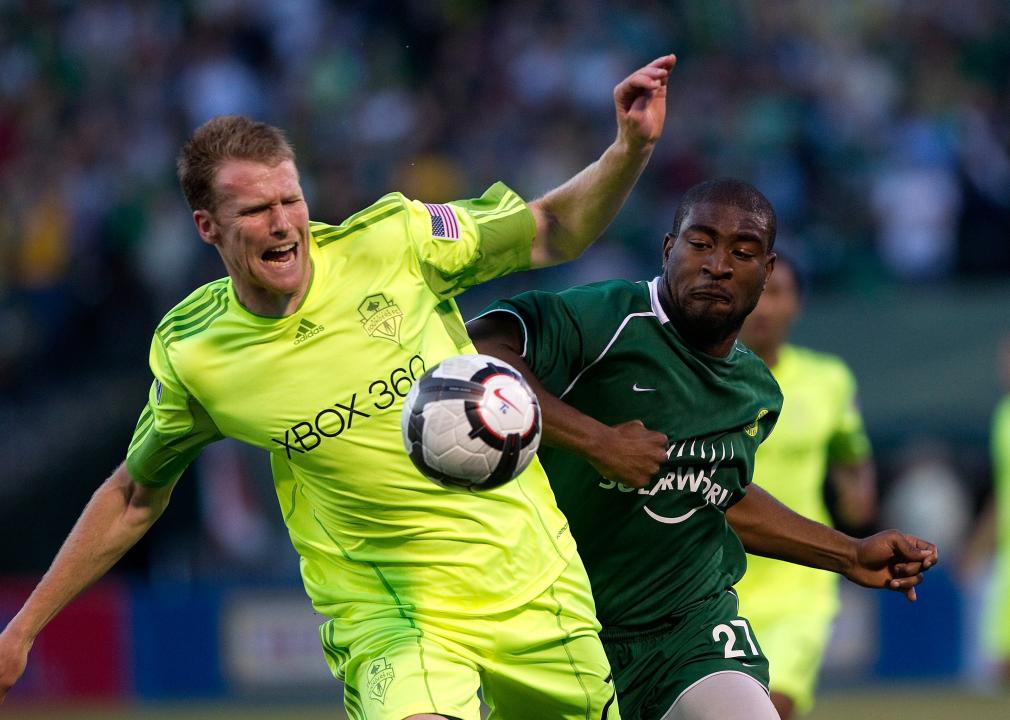 Just how strange is MLS’ weirdest rivalry? Behind the eyebrow-raising trend of the Portland-Seattle derby

On Aug. 26, 2022, the Portland Timbers and the Seattle Sounders will renew one of Major League Soccer’s fiercest rivalries. There’s no denying that these two Pacific Northwest neighbors harbor an intense distaste for one another, but there’s a twist to this rivalry: The away team has the advantage—at least based on a recent trend.

Since 2011, the first year the Timbers and Sounders were both in MLS, home teams in the league win roughly half of matches, just over twice the rate of away wins, per a Stacker analysis (draws make up the remaining quarter). The last 12 times Portland and Seattle have met in the regular season, however, the away team has won 10 times, lost once, and drawn once. That string of matches, which dates back to 2018, represents an 83% away win rate and an 8% home win rate, numbers far from the league mean.

The 10-1-1 combined away record becomes even more shocking when you consider the Sounders and Timbers reside in two of the league’s most impregnable fortresses.

Seattle, which shares Lumen Field with the NFL’s Seahawks, has won 61% of its home matches since 2011, best among all MLS clubs active throughout the entire time frame. Portland, which plays at the near-century-old Providence Park, is also above league average with a 53% home win rate.

And yet, when these two rivals clash, the home-field advantage appears to disappear.

So just how unlikely is it that a pair of MLS teams manage to win just once at home against one another over a span of 12 matches? Stacker set out to unearth the answer by analyzing regular season data from FBref.com. See what we found ahead. 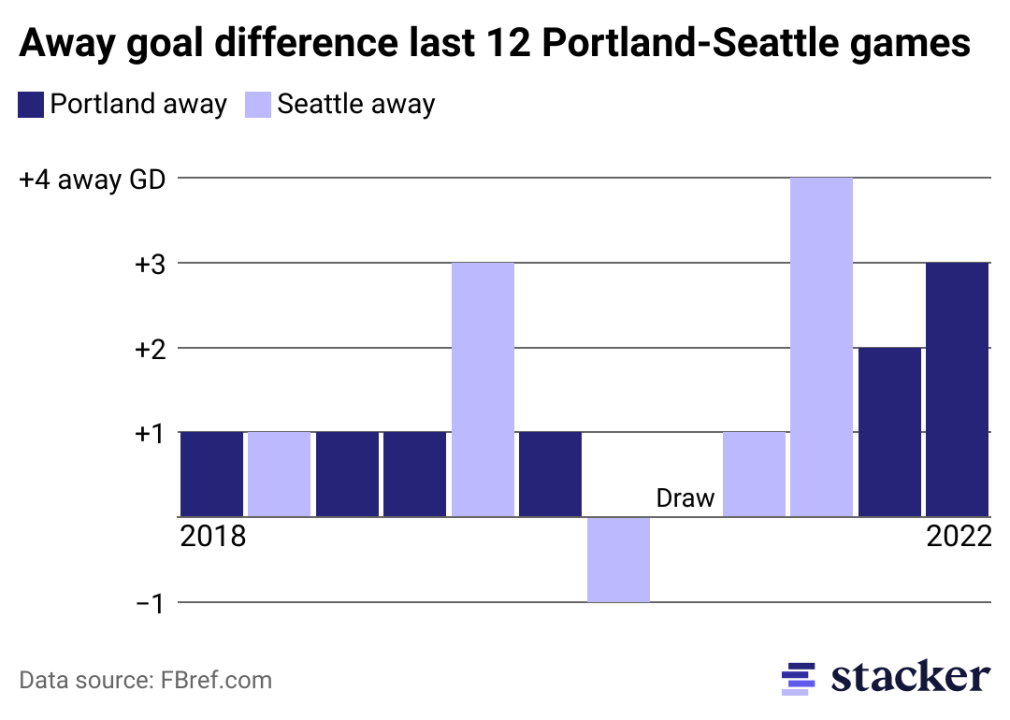 Over the last 12 meetings, the away team in the Portland-Seattle rivalry has a +17 goal difference

While the early contests of this latest span were close, the margin has swung widely in the past year. The Sounders drubbed the Timbers 6-2 at Providence Park in August 2021—the largest margin of victory in the rivalry’s MLS history.

Two weeks later, Portland earned a 2-0 victory on the road in Seattle. And in their first meeting this season, the Timbers won 3-0 on July 9, again, while visiting their neighbors up north. All told, the away team in the past 12 Portland-Seattle matches has a plus-17 goal differential.

The lone home win came in COVID-19-impacted 2020, when Portland won 1-0 in the rain at a virtually empty Providence Park behind a 13th-minute goal from Yimmi Chara. The empty stadium win means home fans haven’t been present for a regular season victory in this rivalry since May 2018.

It’s worth noting that in the two playoff meetings between Portland and Seattle, the home team fared a bit better. Those pair of matches took place over a two-legged tie during the 2018 playoffs; the Timbers won the first leg at home while the Sounders claimed the return leg in Seattle—but failed to advance as Portland ultimately won 4-2 on penalty kicks. 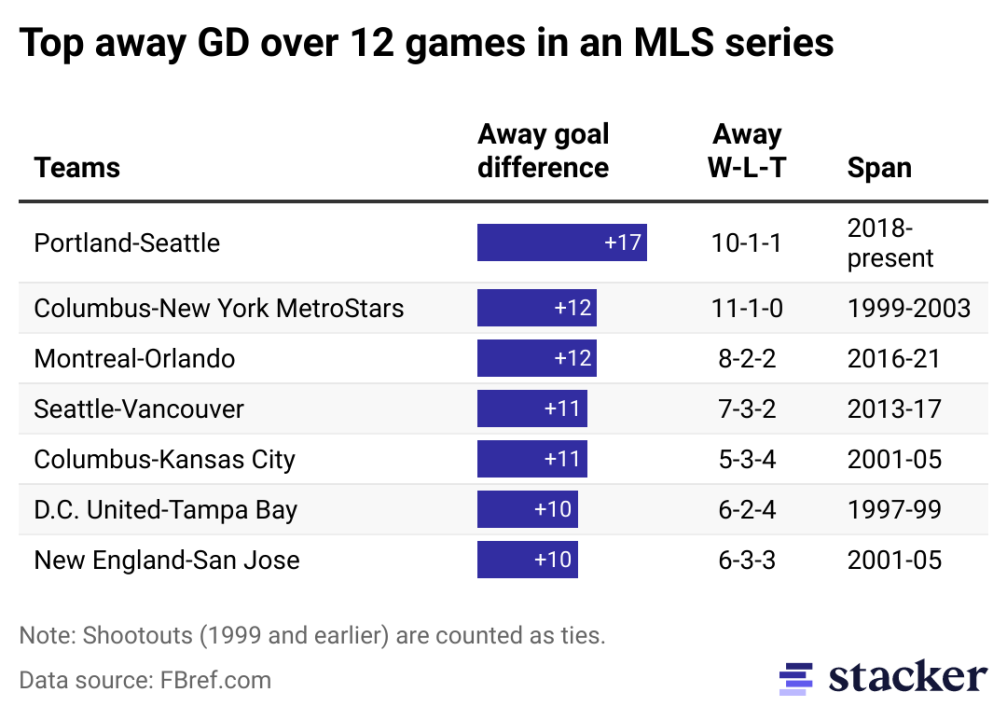 When comparing the data to the rest of MLS, the true oddity of this rivalry begins to stick out.

Stacker analyzed all 6,925 MLS regular season matches that occurred in history from 1996 through Aug. 6, 2022. Out of the 188 matchups that have been played at least 12 times, the Timbers-Sounders series is the only one where the away team has had a 12-game span with an away goal difference above plus-1 goals per game. The series’ 17-goal margin translates to a goal difference of plus-1.42 per match.

Two series come in at plus-12 goals for the away side, or exactly plus-1 per match—the Columbus Crew versus the New York MetroStars (now the Red Bulls) and CF Montreal versus Orlando City. The 1999 to 2003 Columbus-New York span notably posted an away record of 11-1-0, slightly better than the 10-1-1 record of the Portland-Seattle series’ active run.

Also, Seattle isn’t a stranger to bucking the home-field advantage trend. Between 2013 and 2017, the Sounders played a 12-match stretch with the third piece of the Cascadia rivalry, the Vancouver Whitecaps, where the away team enjoyed a plus-11 goal differential. 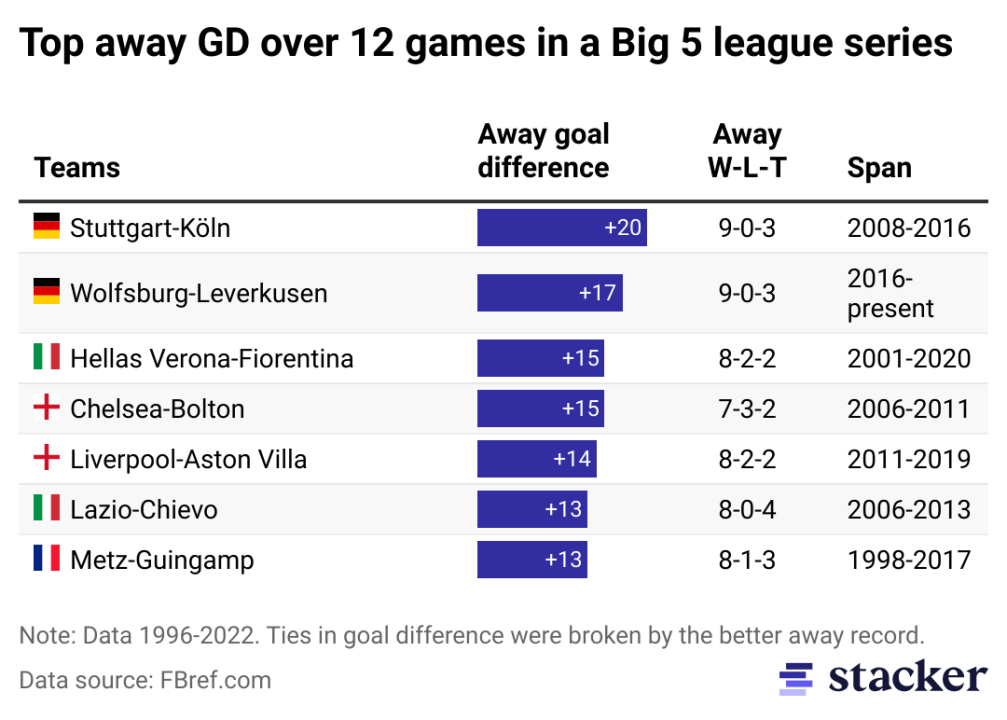 To provide a global context for the current stretch of Portland-Seattle matches, we also looked at results dating back to the first year of MLS from the five big European leagues: England, France, Italy, Germany, and Spain.

While differences in league structure, parity, and quality mean this isn’t an apples-to-apples comparison with MLS, the European leagues do provide a deeper snapshot with a wealth of data for analysis. Since 1996, there have been over 46,000 matches played in those five leagues combined, and there are 1,448 matchups with at least one 12-match span. And when you widen the data set, the rivalry between the Sounders and Timbers remains exceptional.

Just one qualifying European series between VfB Stuttgart and 1. FC Köln (Cologne) has seen a better away goal difference over 12 matches with plus-20 goals. When expanding past a 12-match span, the away supremacy of the Stuttgart-FC Köln series in Germany’s Bundesliga has been truly staggering. In October 2000, FC Köln beat Stuttgart 3-2 at home. It took the series 17 years and 20 matches later for a home team to win again in Bundesliga play—Stuttgart won 2-1 in October 2017 to end the home win drought. During the 19 matches between the home victories, the away team won 11 times with eight draws.

Another Bundesliga series, VfL Wolfsburg-Bayer 04 Leverkusen, is tied with Portland and Seattle at plus-17 goals. Interestingly, that second series is also currently active—Wolfsburg and Leverkusen are next scheduled to play one another on Oct. 20, 2022.

Despite those pair of Bundesliga series, no matchup in Europe’s Big 5 leagues has seen away teams win 10 or more matches during a 12-match span. That makes MLS the only league out of the six analyzed with such a stretch. On top of that, the Timbers-Sounders contest is a rivalry, something none of the series with similar spans can quite parallel.

Whether Portland and Seattle’s trend continues is, of course, unknown. We’ll find out on August 26 whether the Sounders can keep their end of the bargain, when they venture several hours down Interstate 5 to face the Timbers. Regardless of the upcoming match result, this rivalry has already etched one of the rarest stretches in modern soccer history into the tablets of MLS lore.