With talk of a 2023 recession looming, what economic indicators have historically preceded every US downturn? 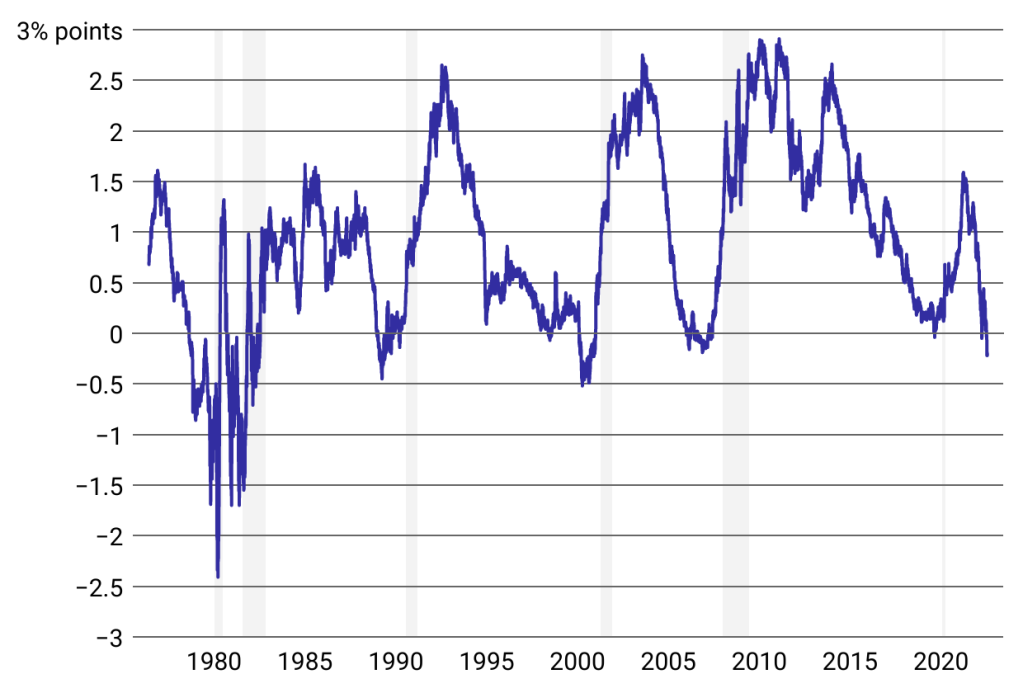 With talk of a 2023 recession looming, what economic indicators have historically preceded every US downturn?

Economic and business news in the United States is currently full of fear over the possibility of a recession. Near-historic inflation has caused the prices of everything from groceries to fuel to soar and has brought many Americans’ ability and willingness to spend money into question. Because consumer spending is one of the major drivers of the economy, reduced spending could stifle economic growth; some experts are predicting a potential “stagflation”—a combination of economic stagnation and inflation and a possible precursor to recession—moving into the final two quarters of 2022.

A recession is defined as an economic contraction, which means that economic activity has moved from a high point to a low point. The popular definition of a recession, as defined by many economists, requires two consecutive quarters of negative real gross domestic product (GDP) growth; however, the National Bureau of Economic Research doesn’t strictly abide by this designation. Many other factors contribute to the economy’s health and can be used to determine whether or not it is heading toward a recession. Among these are unemployment figures, the health of the bond market, and retail sales.

So which is correct? While it’s almost impossible to predict with any certainty, some metrics are more commonly used than others to forecast possible trouble ahead. Stacker cited data from the Federal Reserve Banks of St. Louis and New York, the U.S. Census Bureau, and the Bureau of Labor Statistics to explore how six economic indicators have preceded recessions.

You may also like: Iconic buildings that were demolished 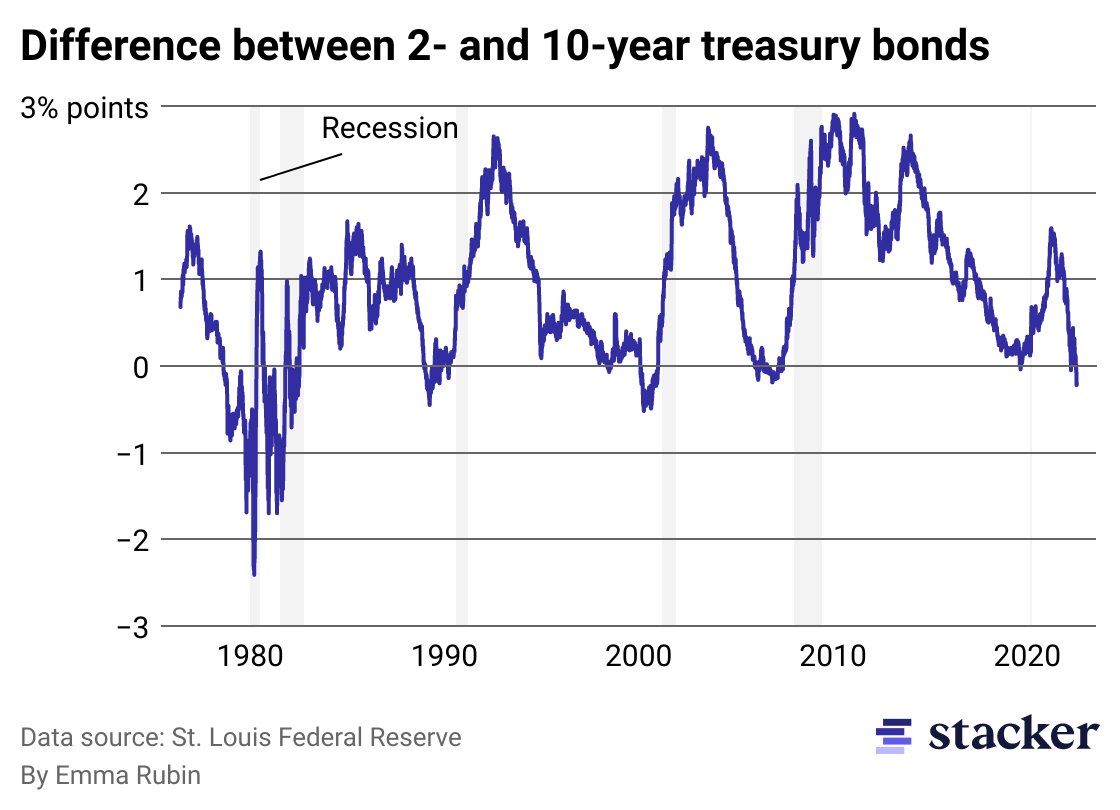 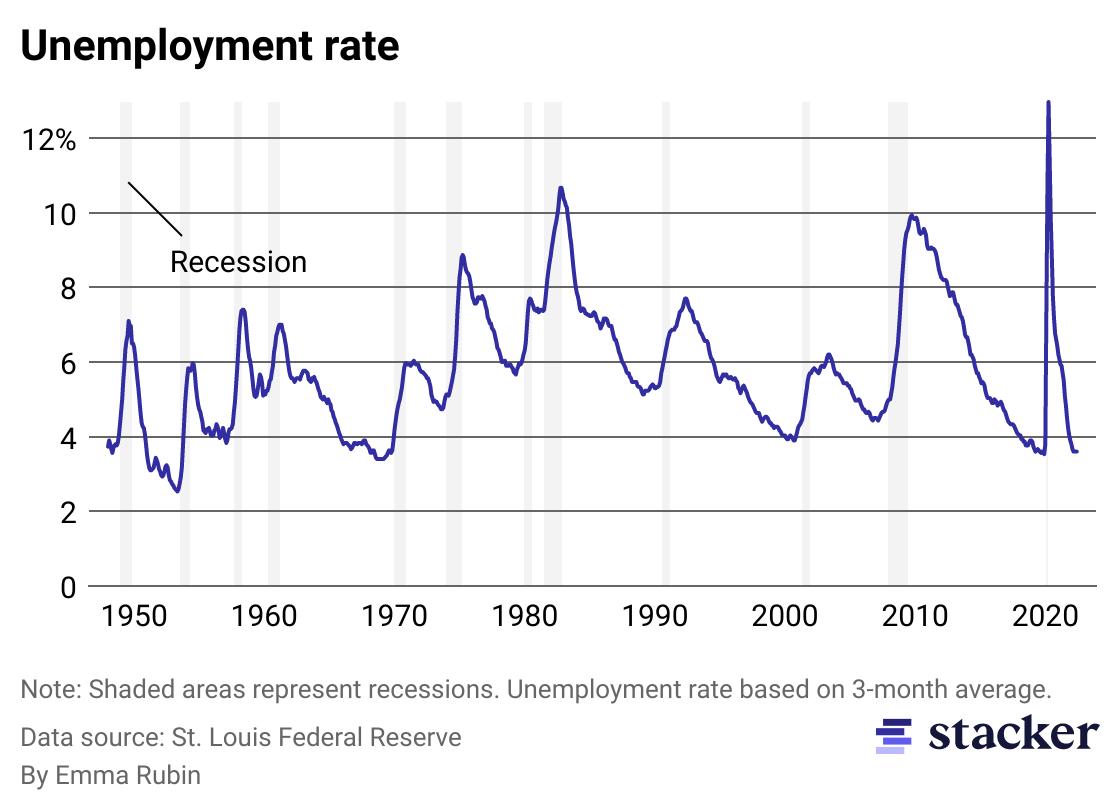 Unemployment is often thought of as one of the primary indicators of a recession. Along with falling stock prices, it indicates that business sentiment is pessimistic. Many economists believe that unemployment rates offer the closest thing to a real-time warning of a recession. Economists at the Brookings Institution have said that if the unemployment rate is .5 percentage points above its minimum for the prior year, the economy is headed toward a recession. But if the United States is heading towards a recession now, it will throw a wrench into that hypothesis: Jobs are currently being added to the economy to the tune of over half a million per month. 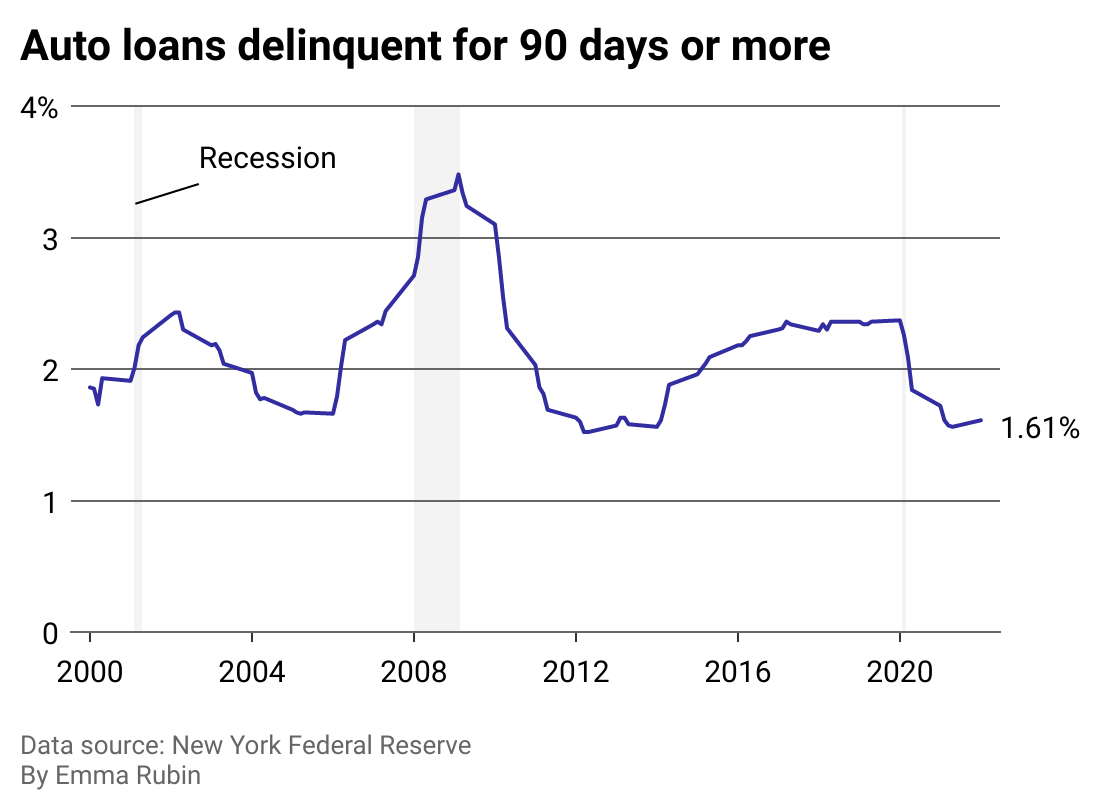 Car repossessions have been thought to be predictors of economic trouble for a fairly obvious reason: When the economy is doing poorly, many individuals within it are also doing poorly, which means they may not be able to keep up with their car payments. As such, repossessions of cars may predict economic trouble ahead; however, current rates of delinquencies are not high, historically speaking. So by this measure, a recession is not necessarily on the horizon. 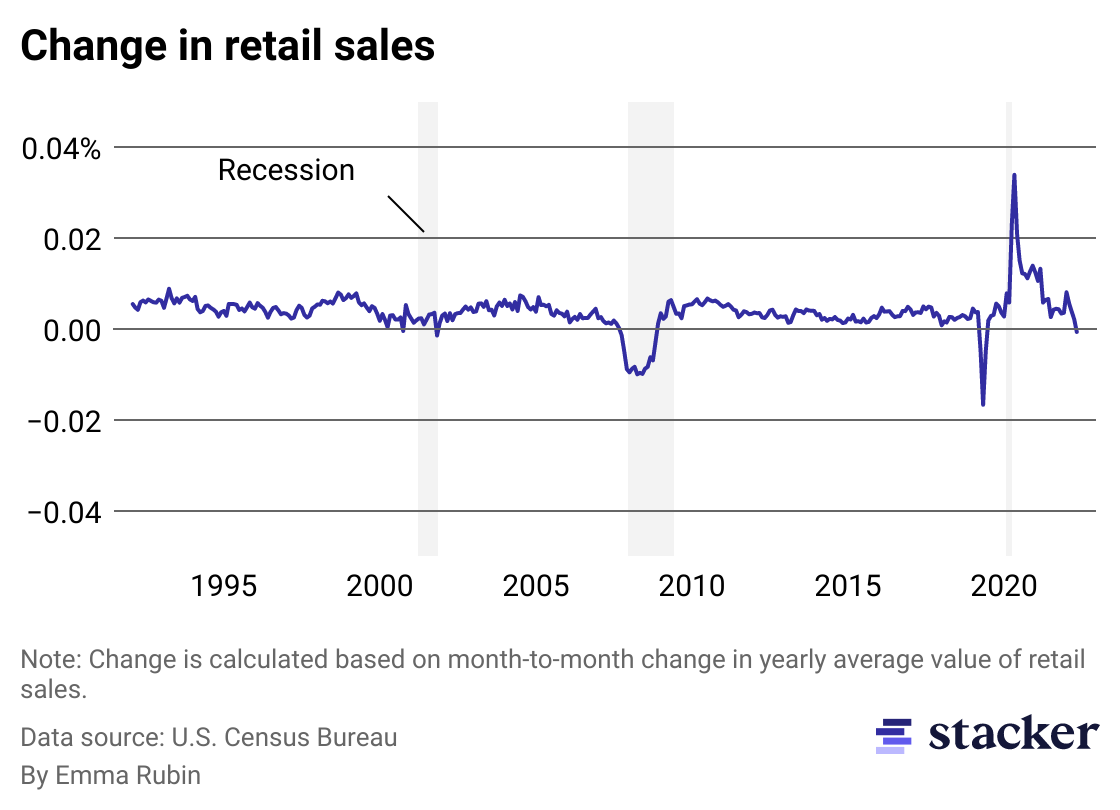 Retail sales are considered an important economic indicator because they illuminate how much customers are willing and able to spend. Consumer spending drives a significant portion of the U.S. economy. So if customers pull back on spending, it may not only indicate that a recession is coming; it might also further that recession. For this reason, politicians sometimes propose tax rebates, betting that if they put money in consumers’ pockets, consumers will spend, which will help to stabilize the economy. Despite some experts’ warnings that a recession is near, current retail sales in the U.S. are relatively steady, potentially reflecting post-pandemic demand as much as the state of the overall economy. 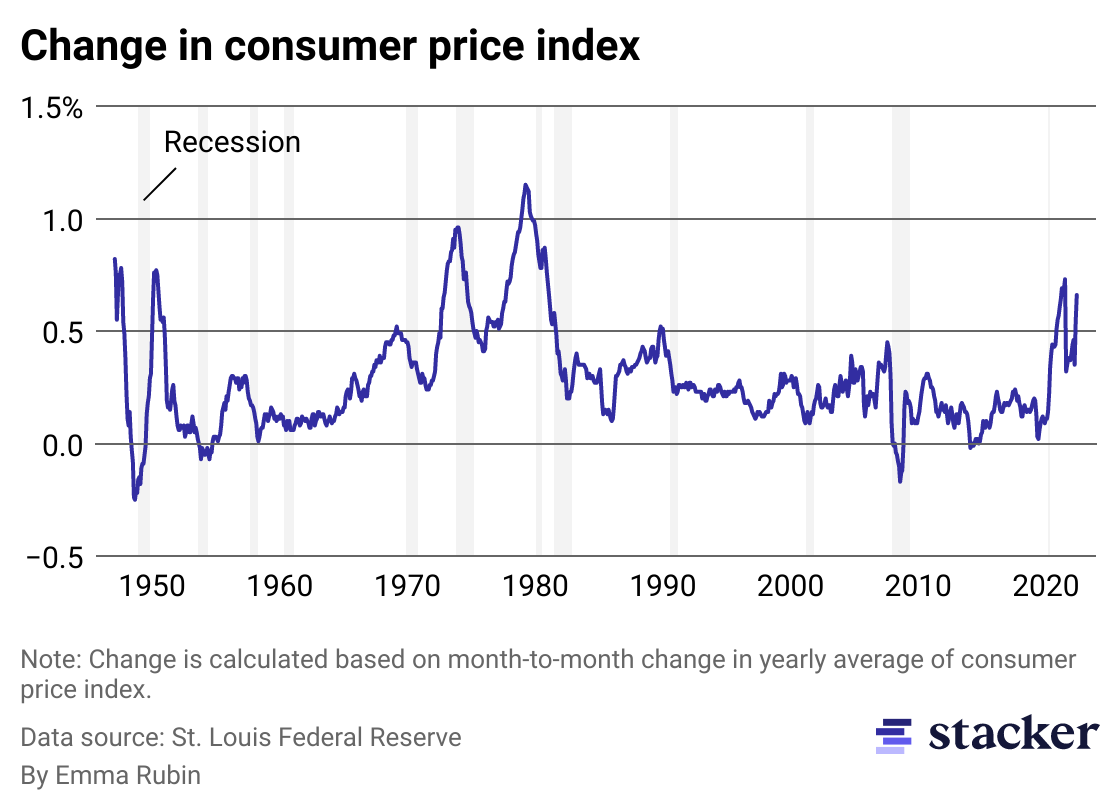 Many economists believe that rising inflation increases the likelihood of a recession. A recent Consumer Price Index report showed that year-over-year inflation has reached 9.1%. This is the highest rate since 1981, when the economy did, indeed, enter a recession. Inflation is generally the key metric by which many banks are now forecasting a recession. Wells Fargo’s chief economist called current inflation data “ugly” and noted that it was becoming more pervasive and long-lasting.

The Inflation Reduction Act recently passed in the U.S. aims to reduce the federal deficit while investing in production and manufacturing. It will also curb the cost of prescription drugs and create a minimum 15% tax for corporations earning more than $1 billion annually. It is a reduced version of the Biden administration’s earlier Build Back Better plan. 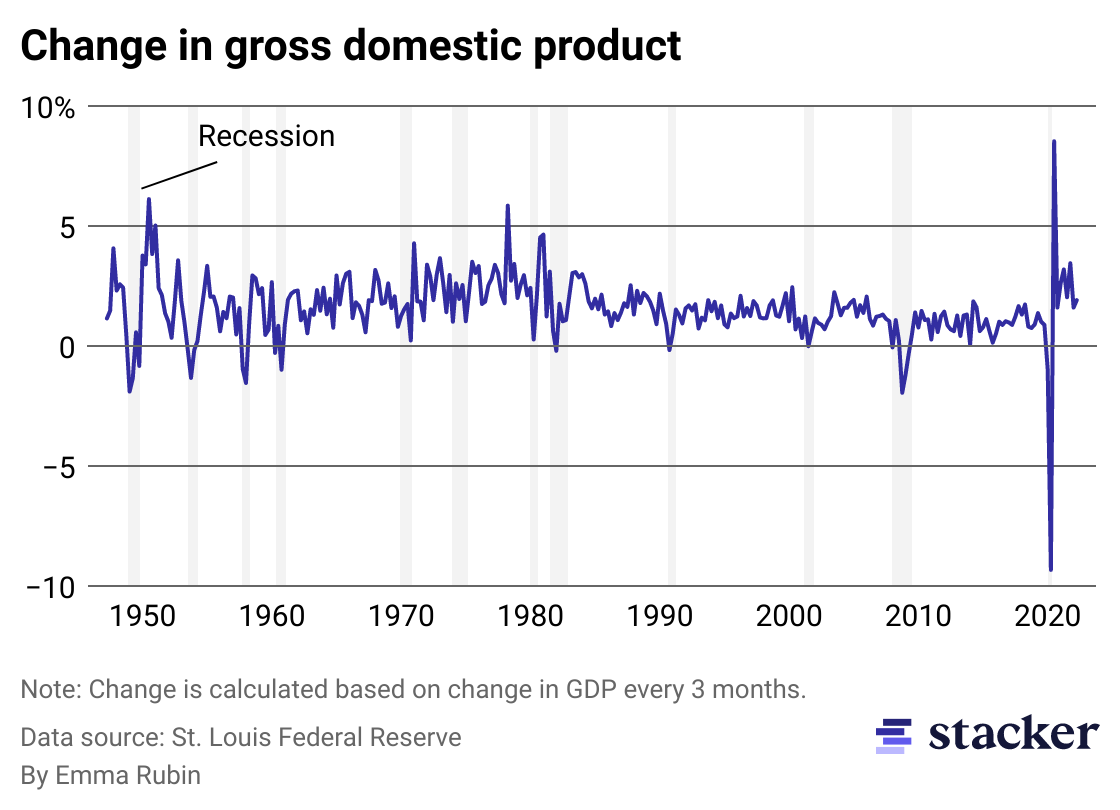 Many economists consider two consecutive quarters of negative GDP growth an indication that a recession is coming; they also use this benchmark to determine whether a recession has already occurred. Other experts think that GDP doesn’t tell the whole story. For example, according to Fidelity, one portfolio manager recently said that the GDP isn’t great at predicting the future: “One limitation of GDP is that it’s a backward-looking indicator,” he said. He further pointed out that the stock market often rose after these two negative quarters, complicating the hypothesis that GDP predicts recessions.