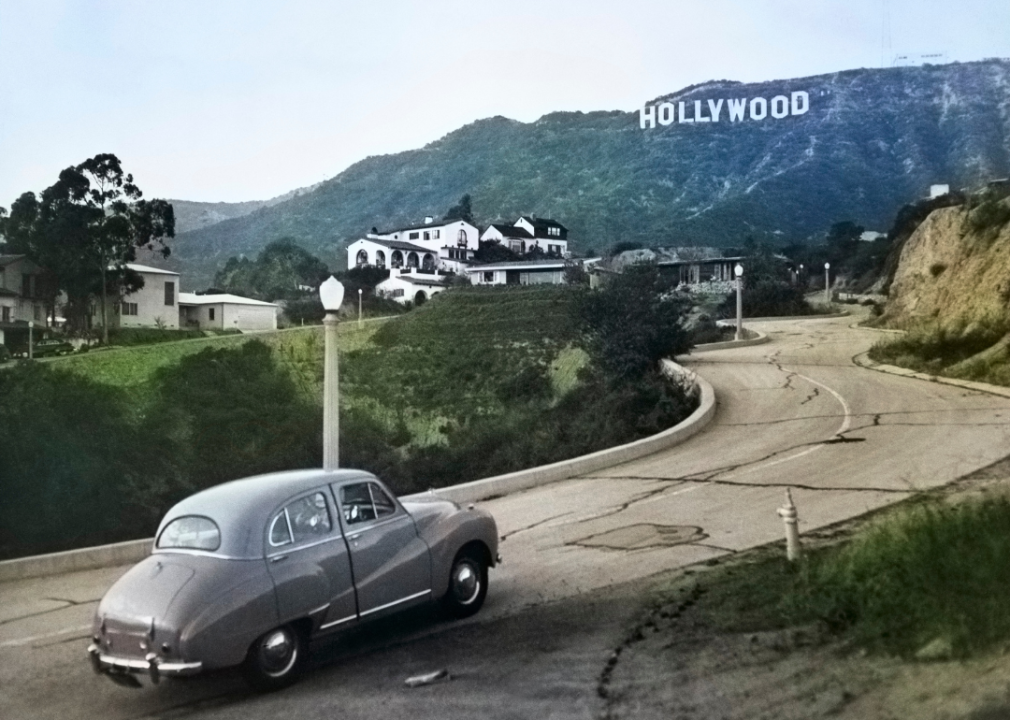 The post-WWII boom of the 1950s affected almost every corner of the country, from northern Michigan to Southern California. But few places were changed by the economic and cultural shifts as much as Los Angeles. The city grew by 500,000 people, most of whom were drawn to the metropolis for its year-round moderate climate, plethora of thriving industries, and suburban feel.

While LA had been growing steadily since the 19th century, it wasn’t yet the jam-packed city we know it to be today. Its various neighborhoods were more separated than they are now, connected by highways and interstates but surrounded by undeveloped land and forests. Residents had all the perks of a major city—a boisterous downtown, a vibrant nightlife scene, plenty of employment options, a culturally and racially diverse population—with the added benefits of smaller communities and plenty of space to build the single-family homes that had become a staple of the American dream.

It’s hard to describe exactly what life was like in LA during the decade, or how it felt like both a major city and a small town, so Giggster scoured historical archives to compile a collection of photos that exemplify what life was like in Los Angeles during the 1950s. From shots of daily life to major events like the Academy Awards, these pictures are sure to make you feel a sense of nostalgia, even if you’ve never been to LA or weren’t alive in the mid-20th century. 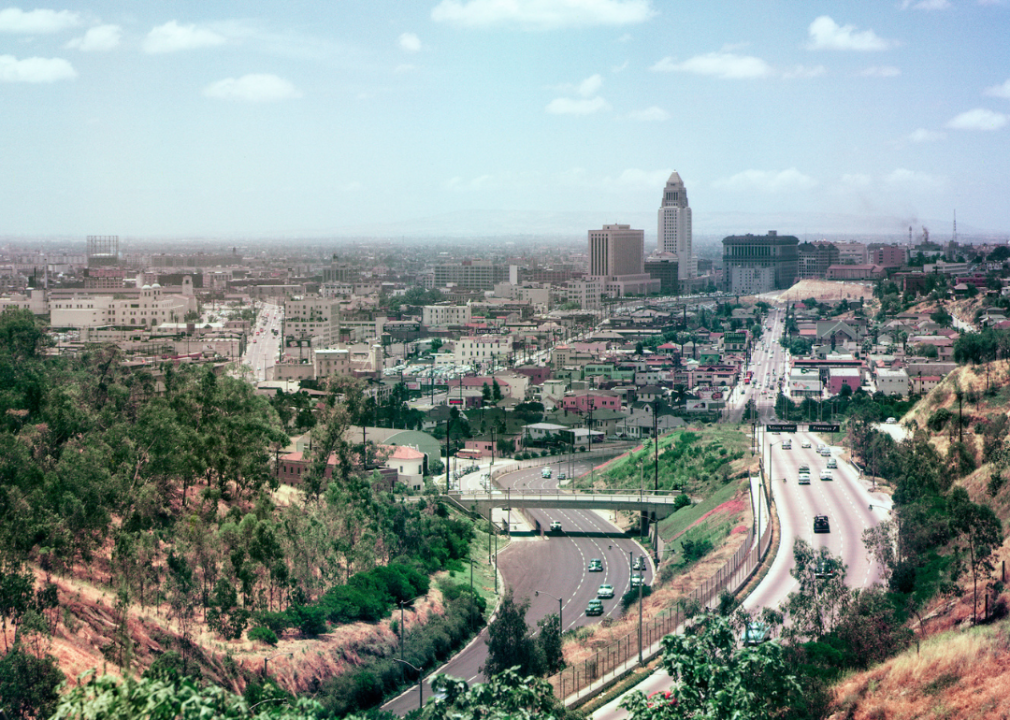 LA’s City Hall can be seen in the distance of this aerial shot. For decades after it was completed—until the late ’50s—a city ordinance prohibited the construction of any buildings taller than 150 feet, making City Hall far and away LA’s biggest building at the time. 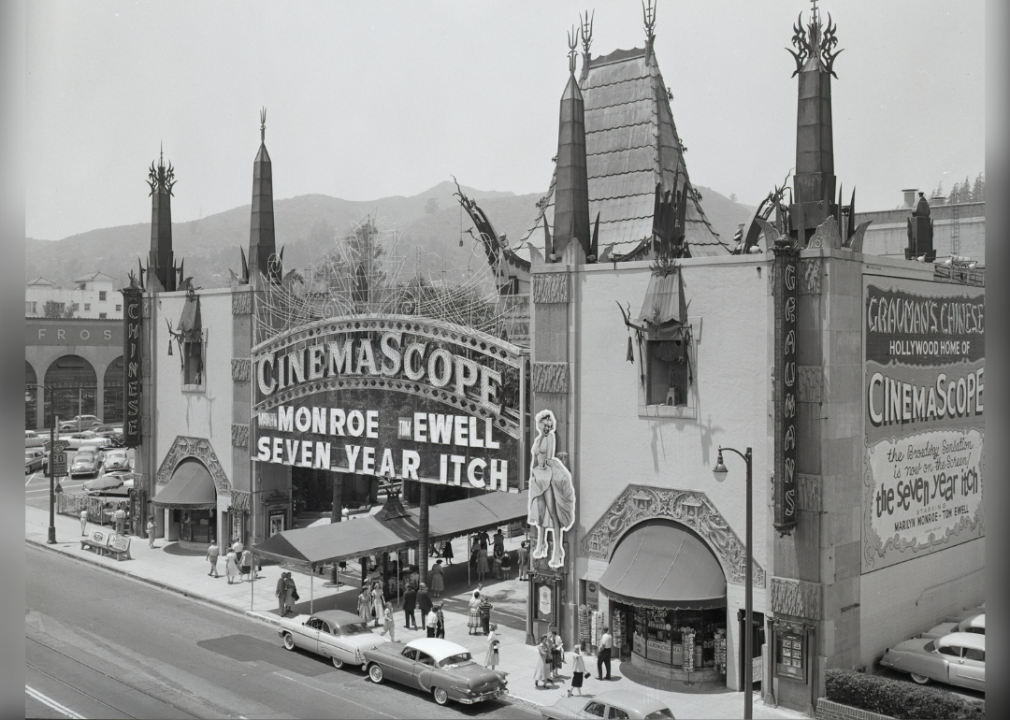 Opened in 1927, Grauman’s Chinese Theater has likely hosted more film premieres and celebrities than any other theater in LA. In 1950, its financier and namesake, Sid Grauman, died of a heart attack. Today, it’s known as the TCL Chinese Theatre and still hosts red carpet movie premieres. 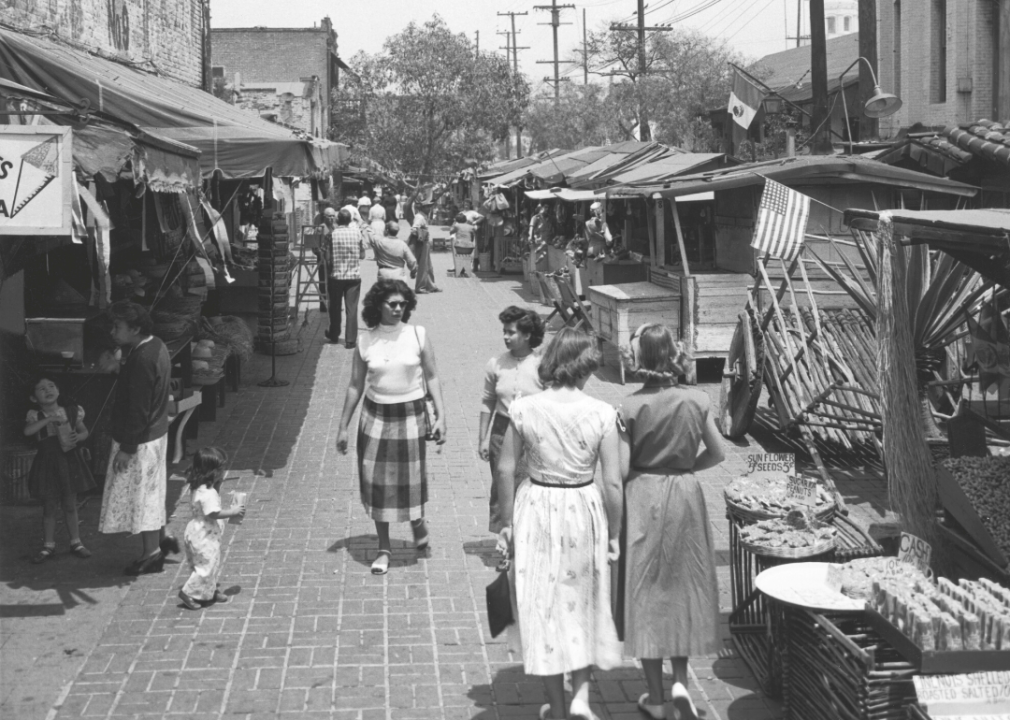 Often referred to as “the birthplace of Los Angeles,” Olvera Street is LA’s oldest street. In the 1930s, the block-long avenue was reinvented as an outdoor mall, complete with vendors selling all sorts of Mexican and Mexican-American items as an homage to some of the area’s earliest settlers. 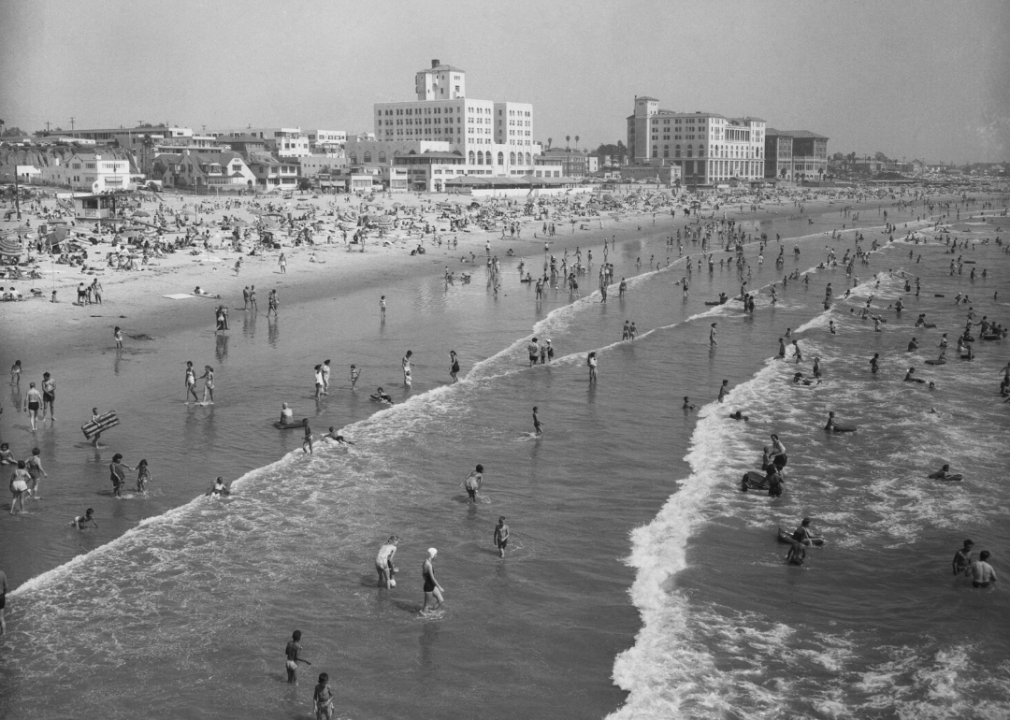 In 1955, LA experienced one of its worst heat waves in recorded history—for eight consecutive days in late August and early September, temperatures reached highs well over 100 degrees. Desperate for some relief, Angelenos flocked to the beaches, including the Santa Monica beach (pictured above) where the archives record some 300,000 people took a dip in the Pacific. 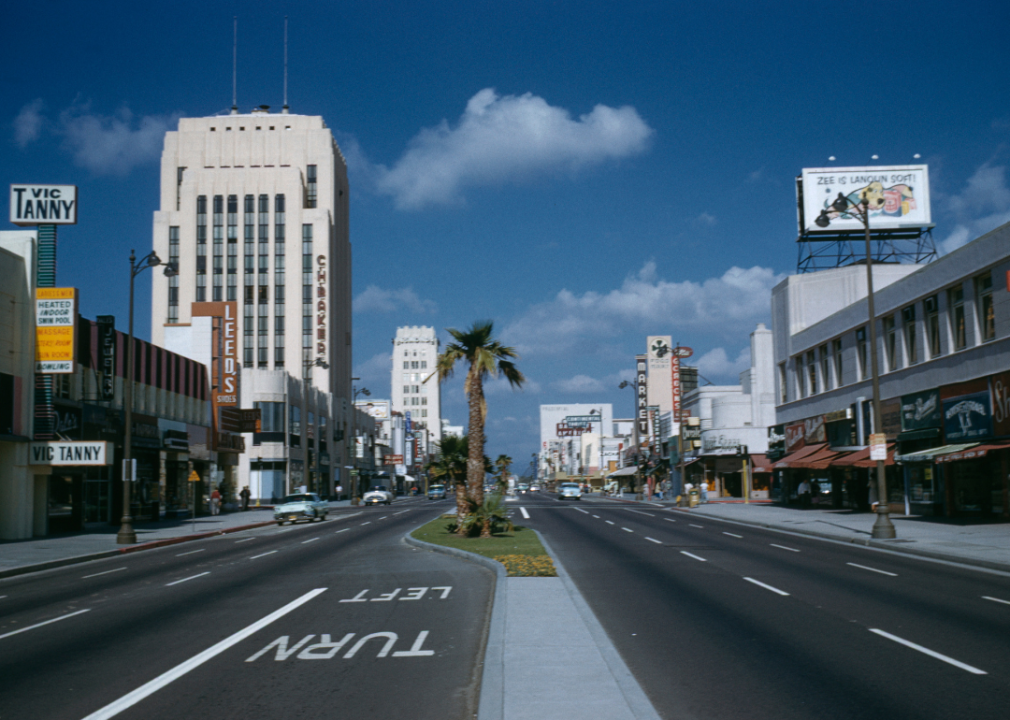 In the 1950s, Miracle Mile, a stretch of Wilshire Boulevard that is home to some of the city’s best shopping and most interesting museums, was one of the most visited parts of the city. 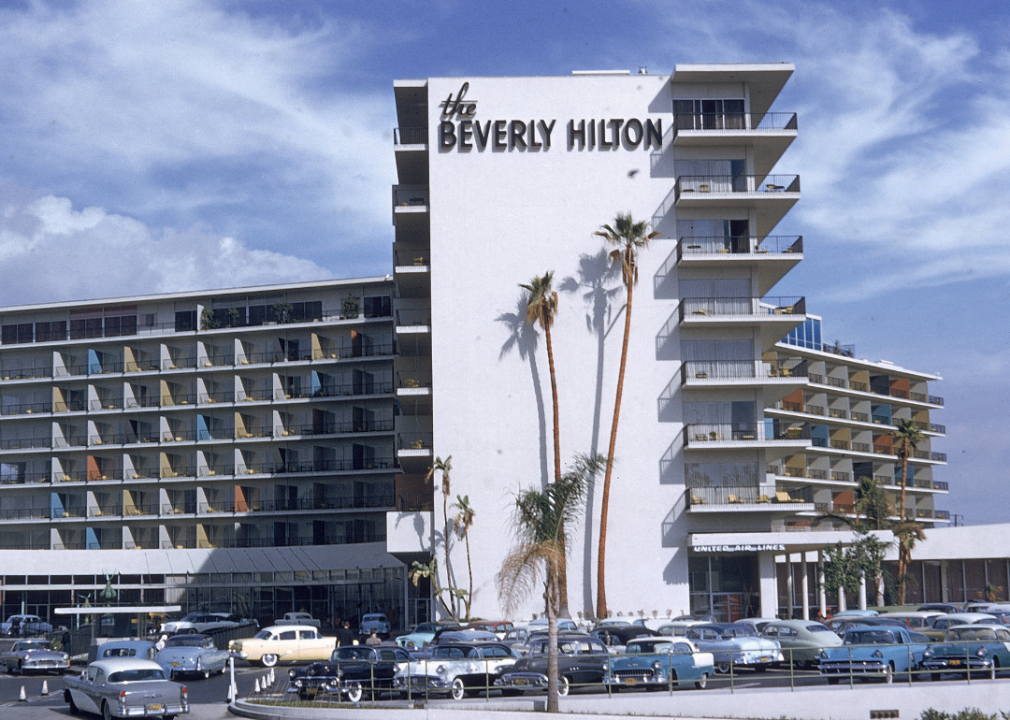 Located on the corner of Wilshire and Santa Monica Boulevards, the Beverly Hilton opened its doors in 1955. Since 1961, the glamorous hotel has hosted the Golden Globes ceremony in its grand ballroom. 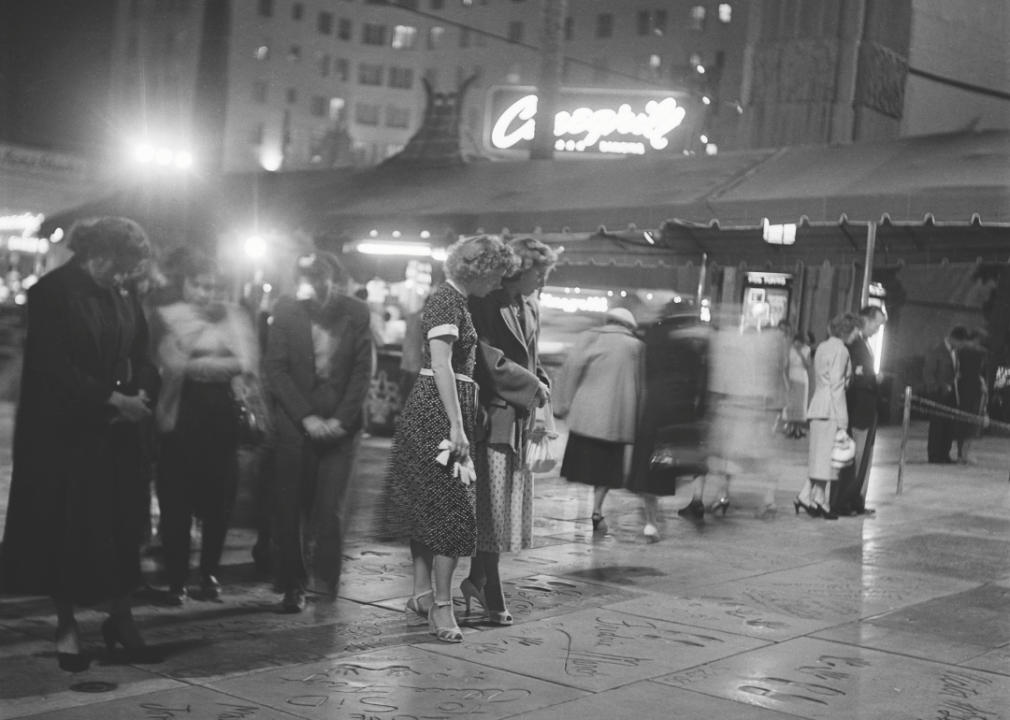 Two tourists pictured here stop to admire the concrete footprints in the courtyard of Grauman’s Chinese Theater. In the 1950s, more than two dozen major stars—including Elizabeth Taylor, John Wayne, and Marilyn Monroe—all added their hands and feet to the collection. 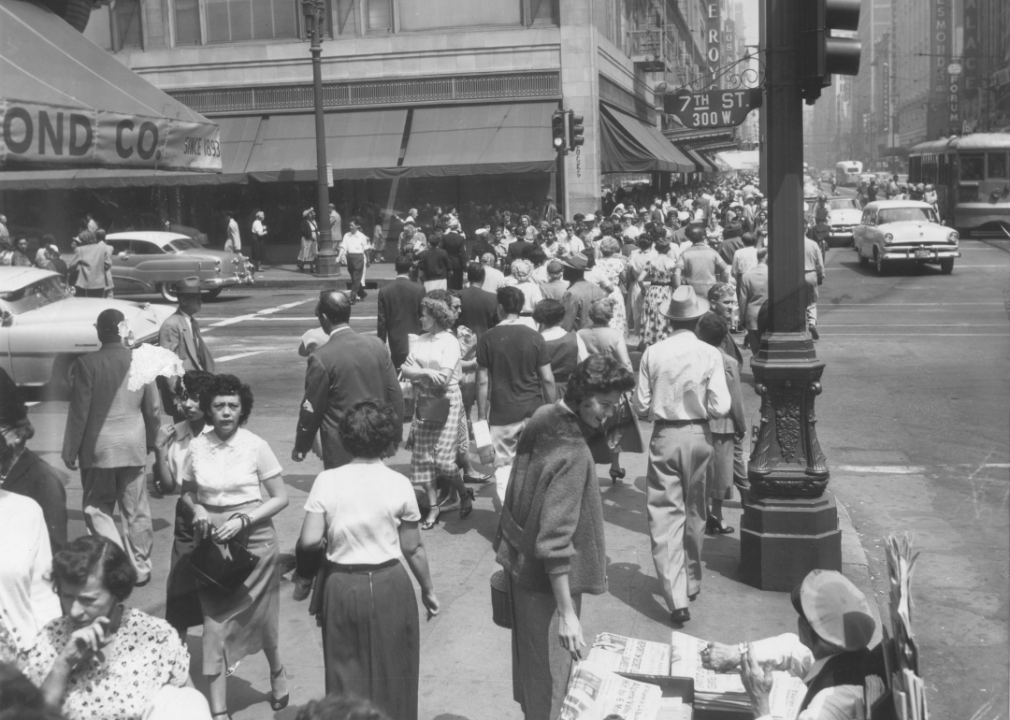 Hoards of Angelenos, their numbers ever-growing thanks to a 1950s population boom, cross 7th Street on a warm, sunny day. 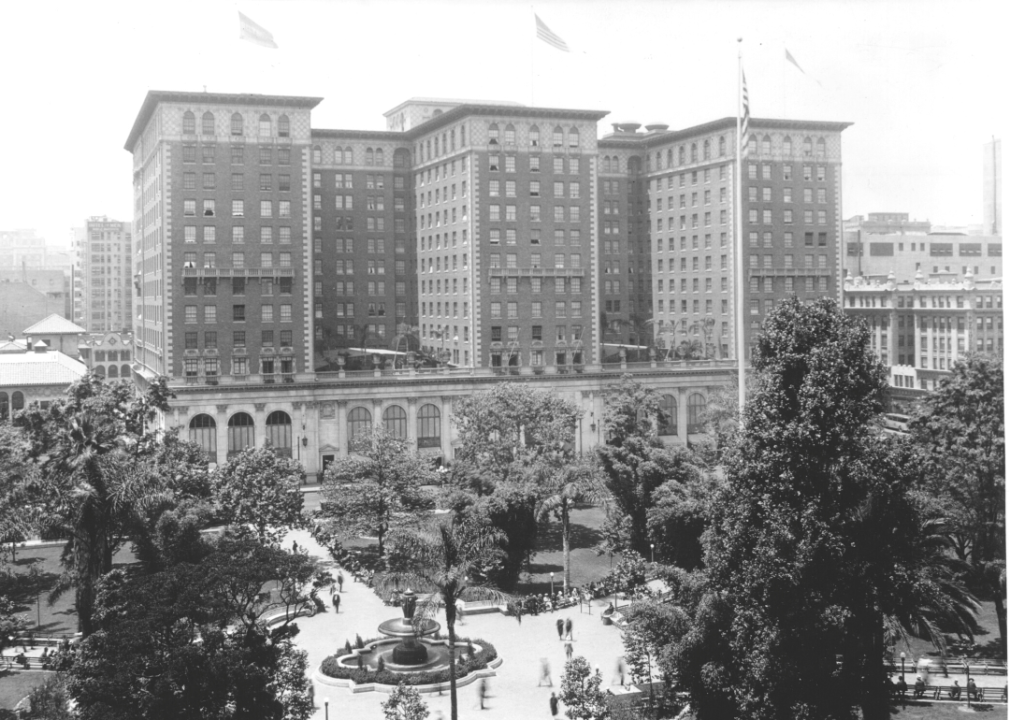 Once the largest hotel west of Chicago, the luxurious Biltmore Hotel is best known for hosting several of the first Academy Awards ceremonies. At the turn of the decade, the hotel played host to the 1960 Democratic National Convention. 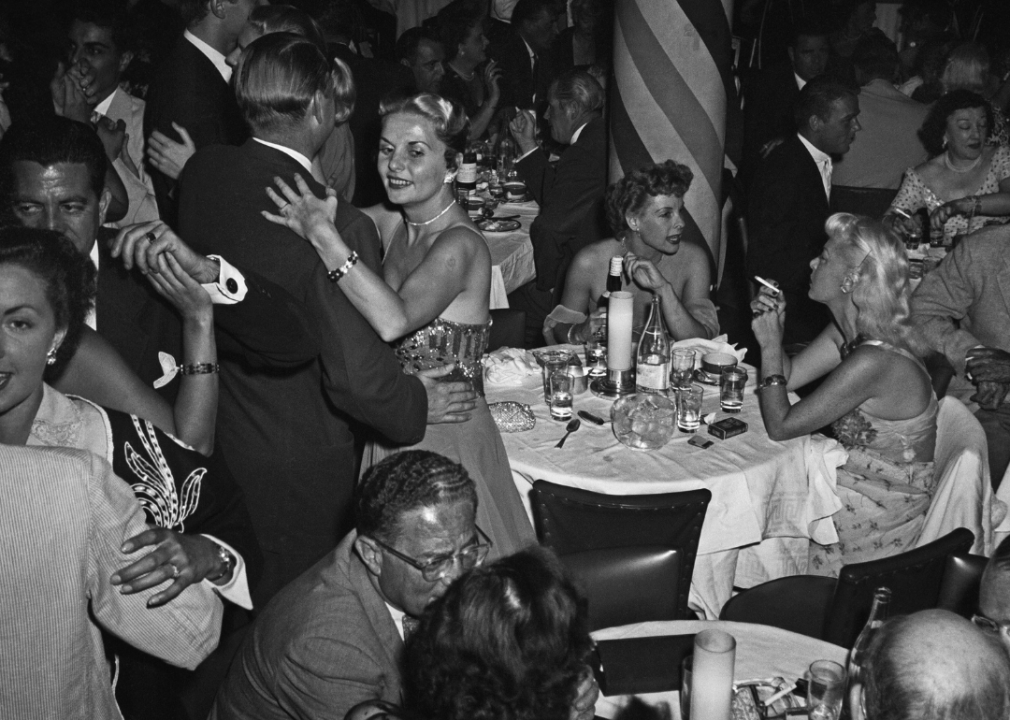 In 1958, the Mocambo nightclub, a favorite with celebrities for its Latin-American decor and collection of live birds, closed. First opened in 1941, the nightclub allegedly booked jazz singer Ella Fitzgerald in 1955 only after Marilyn Monroe committed to sitting in the front row during all of her performances. 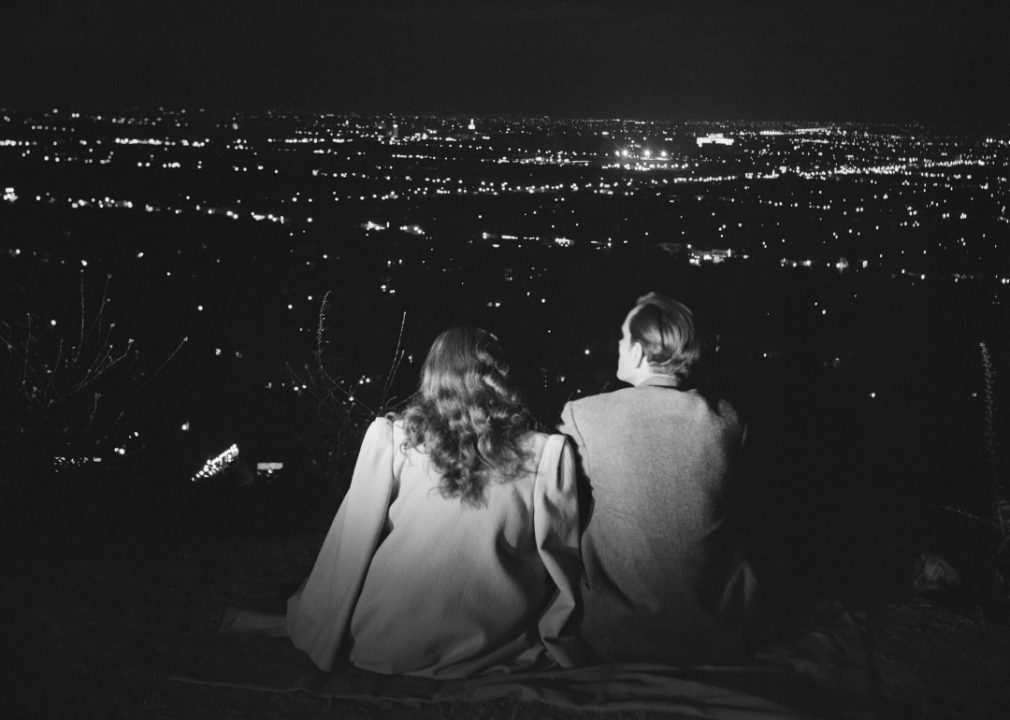 A young couple look out over the city from Mulholland Drive, a road that winds along the Santa Monica Mountains and boasts excellent lookout points, on a warm summer night in 1951. 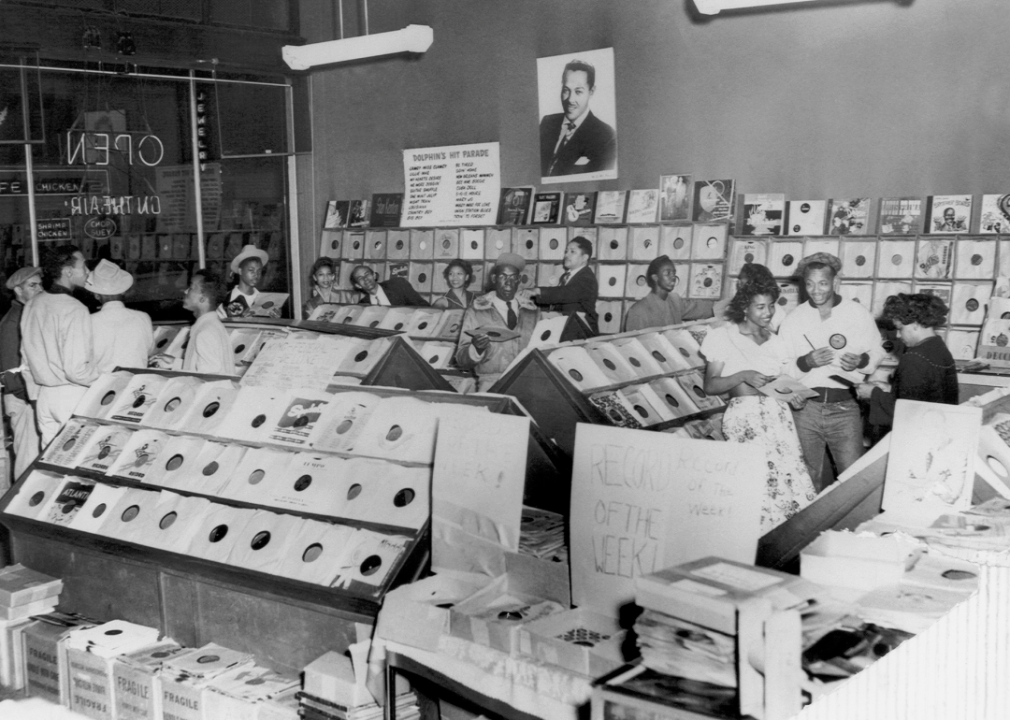 One of the most famous record shops in America, Dolphin’s of Hollywood was open 24 hours a day, had live DJs spinning records in the front window, and had both its own record label and radio station. The shop’s founder, John Dolphin, was a Black man, but his store became a haven for music lovers of all races, much to the chagrin of 1950s cops who were attempting to enforce Jim Crow laws. 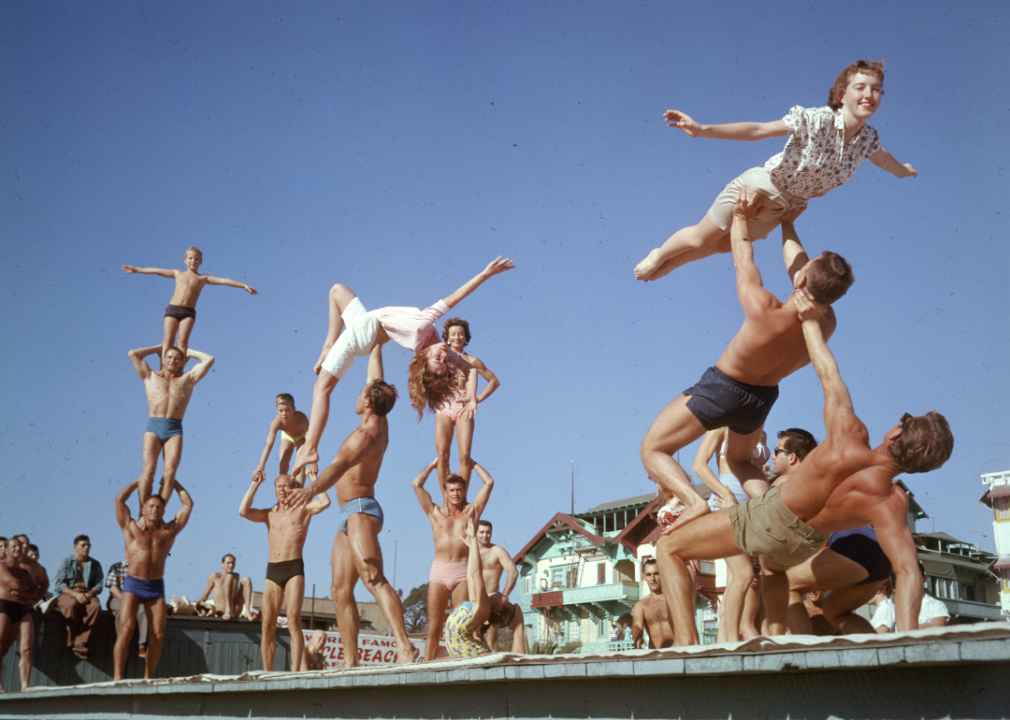 Muscle Beach, in Santa Monica, reached the zenith of its popularity in the 1950s, with folks from all over the world coming to watch its acrobats and bodybuilders do their thing. Here, a group of men and women show off their impressive skills on the area’s dedicated platform. 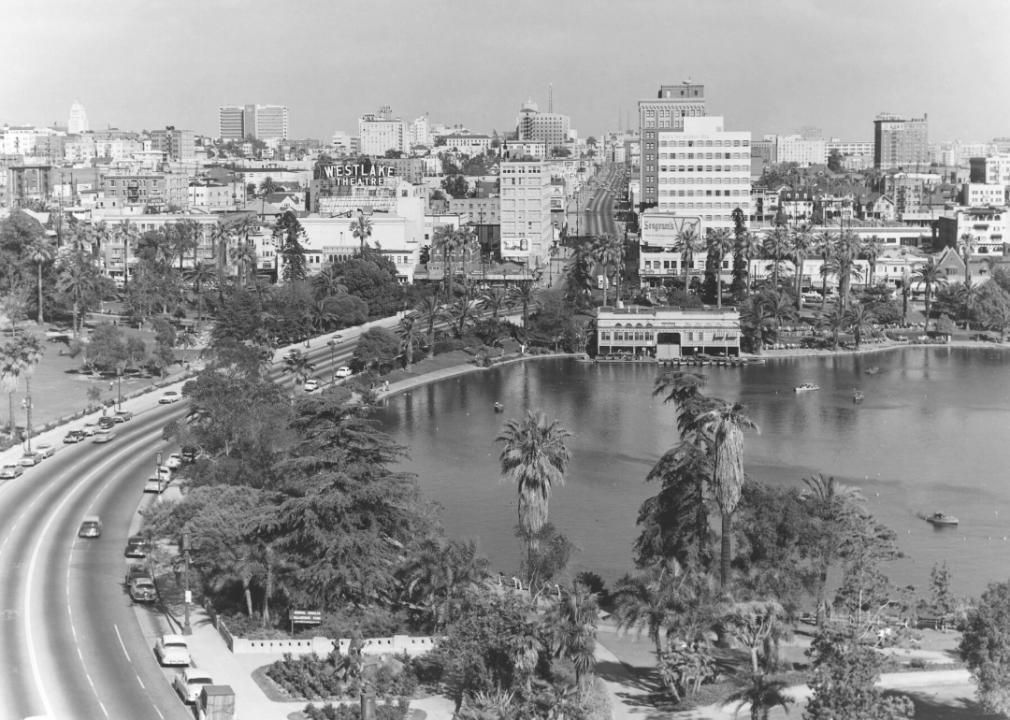 MacArthur Park (whose lake is pictured here) has long been a center of LGBTQ+ life in Los Angeles. In the 1950s, it was a popular cruising location, and one such encounter (that went horribly wrong) sparked a legal case that got national attention. 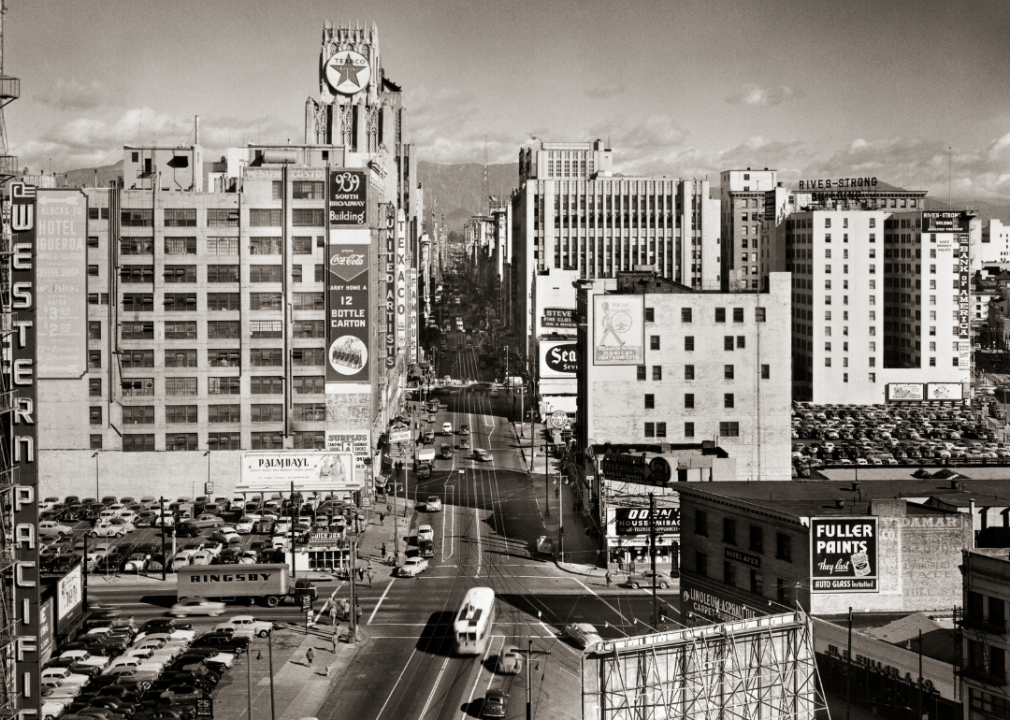 This aerial photograph of downtown LA captures one end of the city’s historical theater districts. At its height, the six-block stretch of Broadway had the largest concentration of movie theaters in the world and could seat more than 15,000 moviegoers. 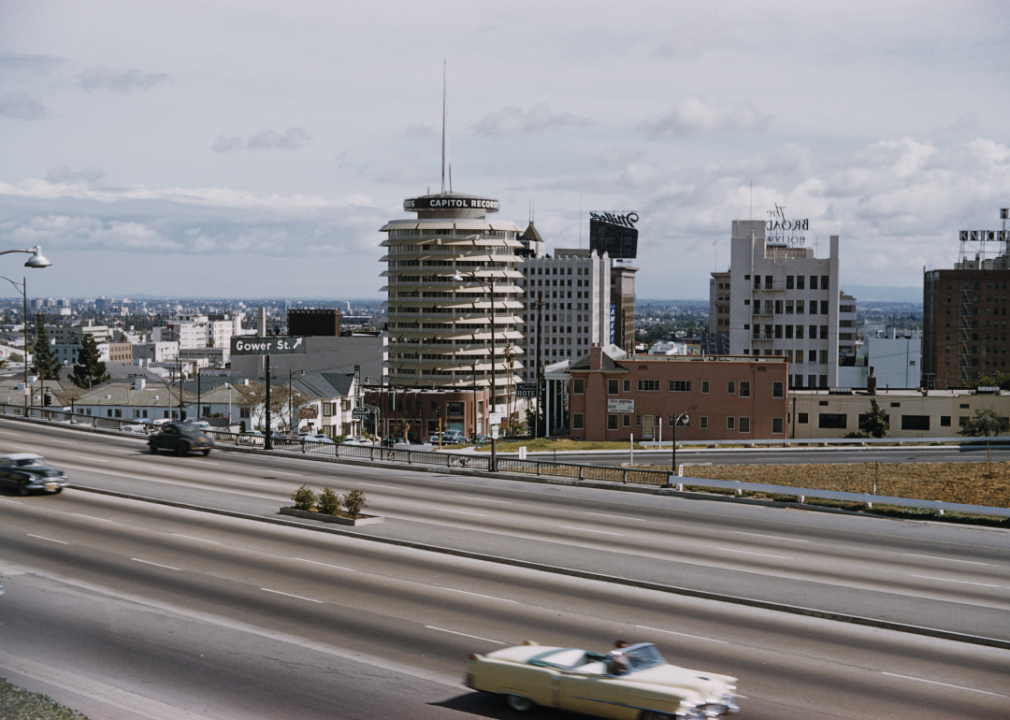 The world’s first circular office building, the Capitol Records Building was completed in 1956. Designed to resemble a stack of records, the building has hosted music legends like Frank Sinatra, Nat King Cole, and Paul McCartney throughout their recording processes. 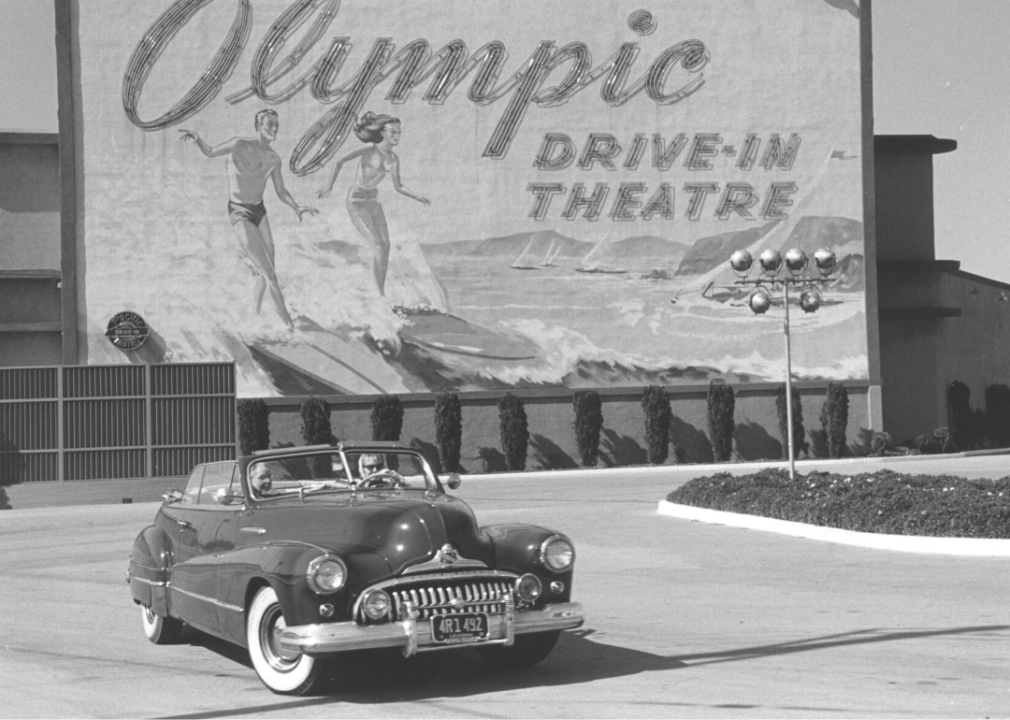 Nothing captures LA’s endless summer vibes quite like this picture of two women steering their convertible around a sign advertising one of the city’s many year-round outdoor theaters. 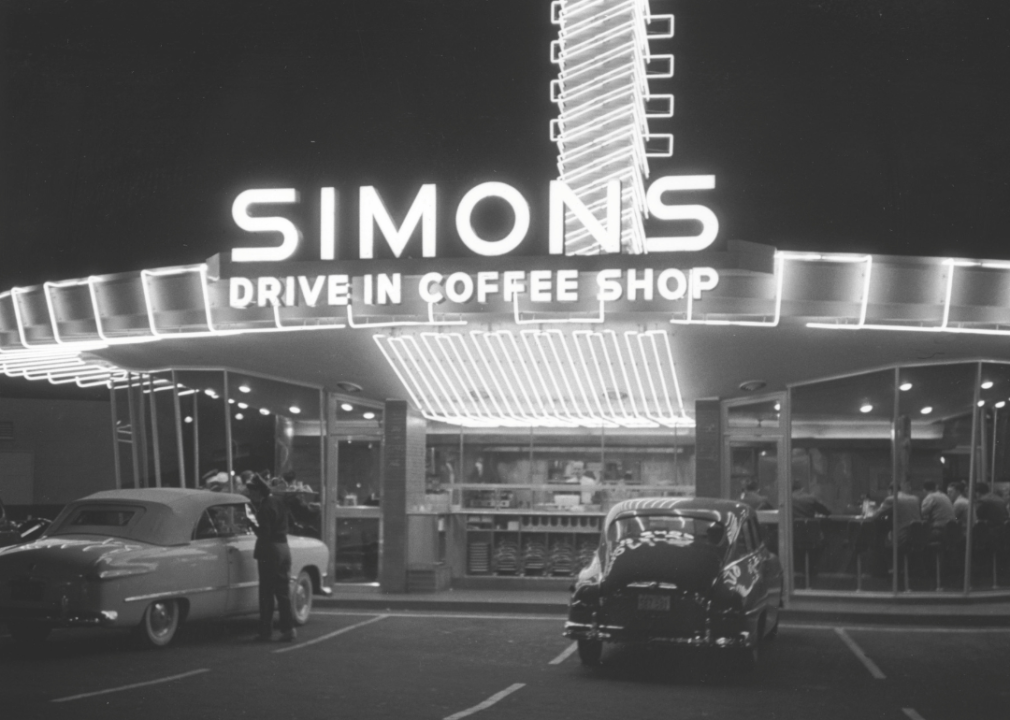 Drive-in restaurants were all the rage in the 1950s, and at one point Simon’s Coffee Shops dominated the LA drive-in scene. The restaurants, which offered everything from coffee to spaghetti, served patrons both outside in their cars and inside at the circular counters. 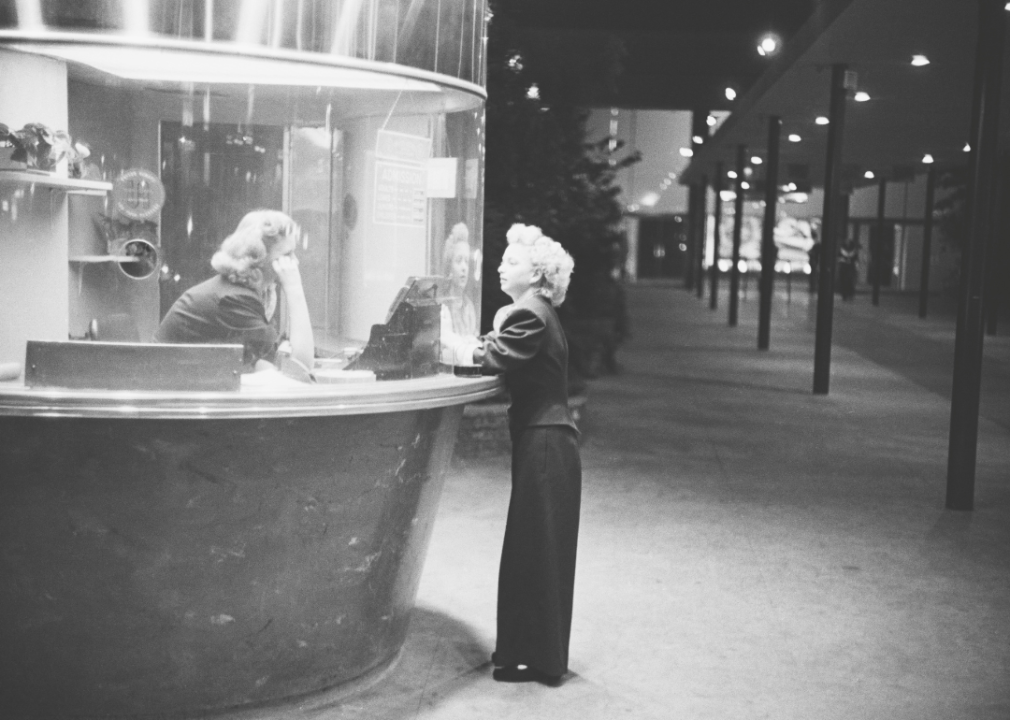 Most folks are familiar with Grauman’s Chinese Theater, but far fewer know about Grauman’s first foray into the movie palace world—the Egyptian Theater. Built in 1922, and the site of the very first movie premiere, the theater is now owned by Netflix (which is giving it a long overdue restoration). Here a woman buys a ticket at the location’s old outdoor box office. 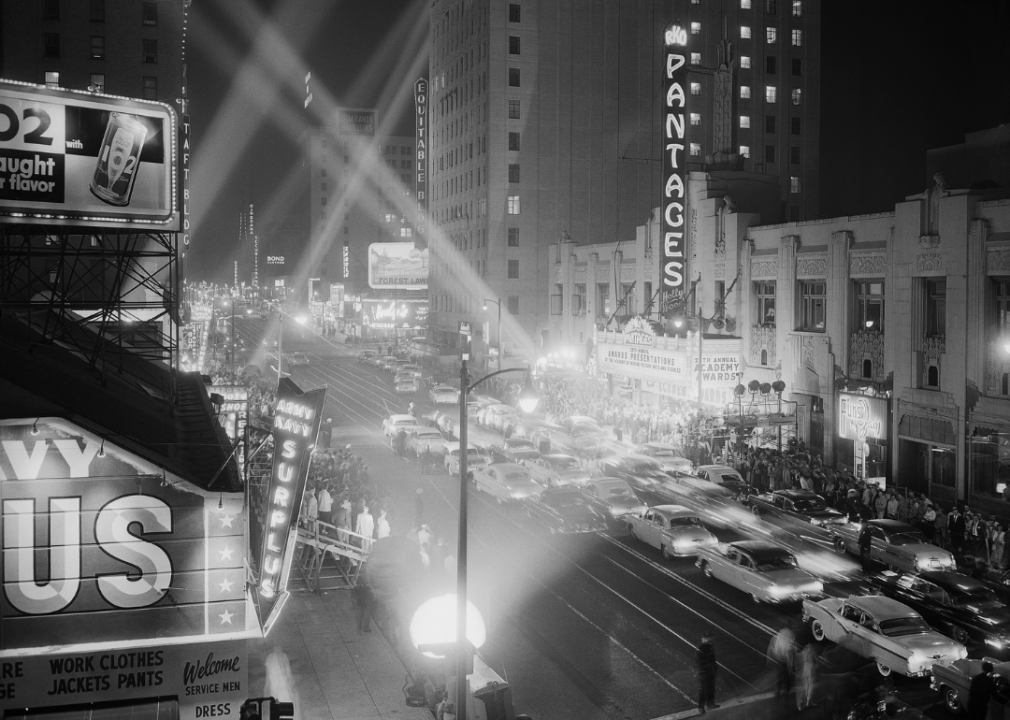 Hollywood Boulevard teams with people and glows with lights on the evening of the 28th Academy Awards. The big winner that night was a film called “Marty,” starring Ernest Borgnine, which took home the trophy for Best Picture.