Freddie Mercury: The life story you may not know 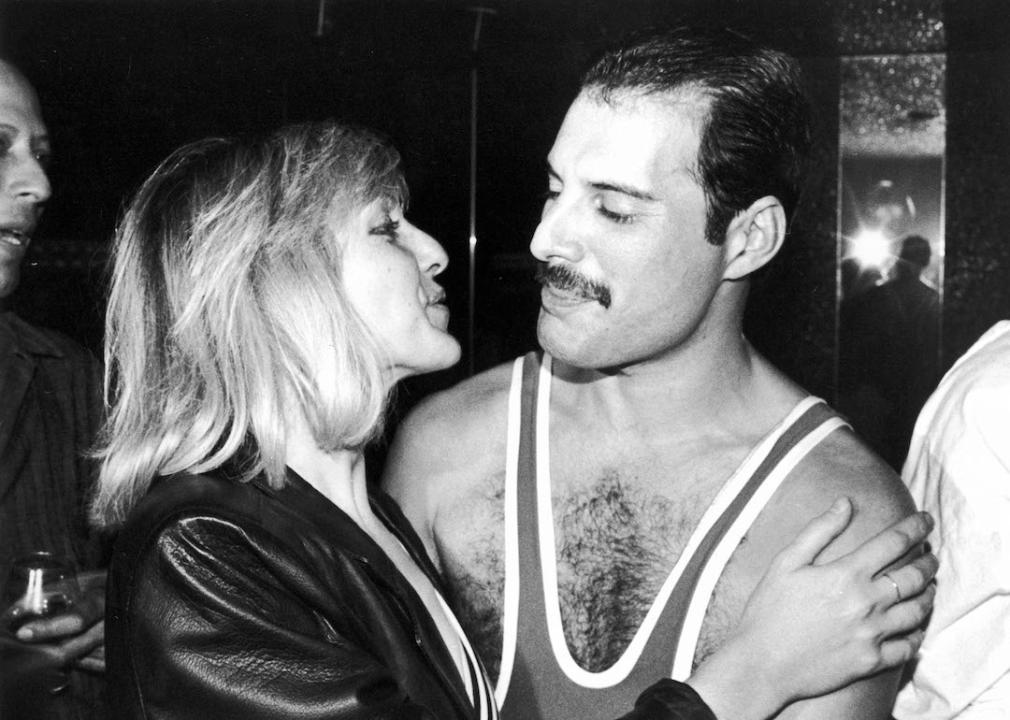 Freddie Mercury: The life story you may not know

Queen frontman Freddie Mercury was a prolific writer, an introverted empath, and an iconic musician. His band stands among the world’s most successful of all time, with record sales topping 300 million worldwide. Queen’s two-night run at London’s Wembley Stadium in ’86 is still universally perceived as standing among the most unforgettable live rock events in history.

To celebrate Mercury’s outsized life, Stacker compiled a list of 25 elements from his biography that many fans might not know about. From working as a baggage handler at Heathrow airport to hiding his HIV diagnosis from the public until just before his death, Mercury’s life was filled with adventure, publicity, and perhaps above all a clear duality. He was both flamboyant and shy, outspoken and intensely private. He had two remarkable relationships: one with Mary Austin, another with Jim Hutton, both complicated and both long-term. Hutton was with Mercury for seven years before the star’s death; Austin, Mercury’s first serious relationship, was told by the musician where to bury his ashes.

Ten of the 17 songs on Queen’s 1981 “Greatest Hits” collection—the band’s bestselling album—were written by Mercury. He began writing Queen’s most famous song, “Bohemian Rhapsody,” while he was still in college, calling it “The Cowboy Song” at the time (“Mama, just killed a man…” being one of the earliest lyrics he’d come up with). His favorite artists were Aretha Franklin and Jimi Hendrix.

Today, a giant statue of Mercury overlooks a lake in Montreux, Switzerland, where Mercury moved to after buying Mountain Studios. Queen’s last album was also recorded there.

Mercury’s voice was said to have had a four-octave vocal range and was the subject of a 2016 study that sought to better understand it. He refused to get his teeth fixed, despite having four extra molars in the back of his mouth, for fear that doing so would alter his singing voice. Still, Mercury was clearly self-conscious about his teeth, frequently covering his top row with his upper lip or hand while on camera.

He co-wrote “The Show Must Go On,” off 1991’s “Innuendo,” with bandmate Brian May. The song is about Mercury’s commitment to continue performing and singing right up until the final moment, even as he was dying of AIDS.

You may also like: 50 of the longest celebrity marriages 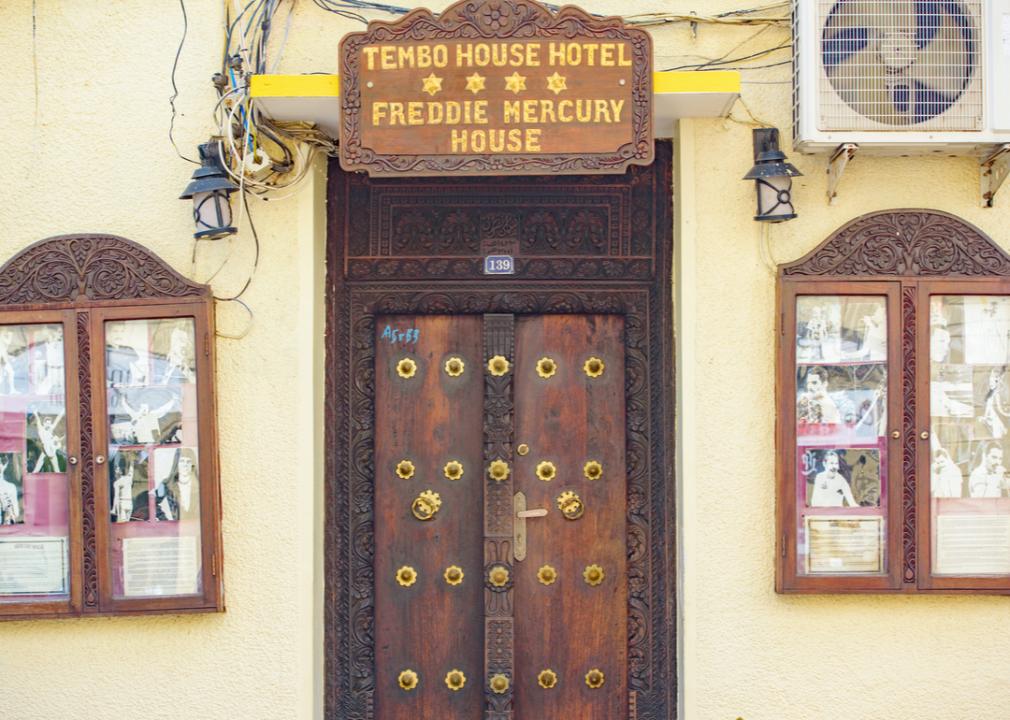 Freddie Mercury was born Farrokh Bulsara in 1946 on the Tanzanian island of Zanzibar. His parents, Bomi and Jer Bulsara, were Parsi and practiced Zoroastrianism, the world’s oldest monotheistic religion. Mercury had one younger sister, Kashmira Cooke. 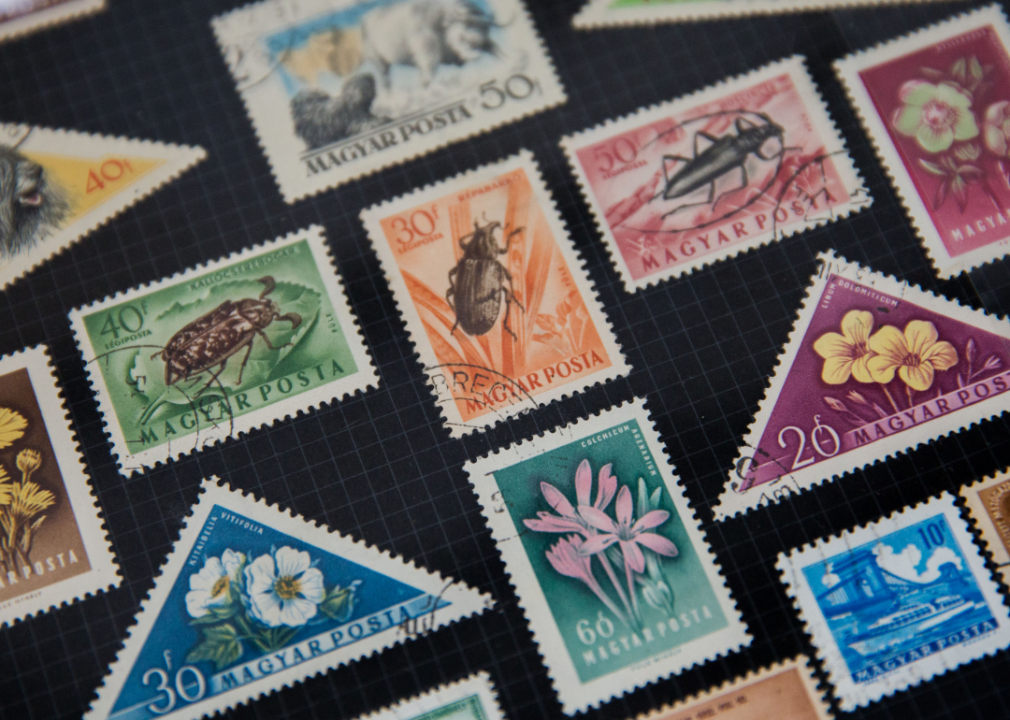 Mercury’s extensive stamp collection is permanently housed at the Postal Museum in London, which bought the collection in 1993 with proceeds going to the HIV/AIDS charity Mercury Phoenix Trust, which was started in his honor. Mercury’s collection started when he was around 9 years old and living in Zanzibar. The collection has been exhibited all over the world. 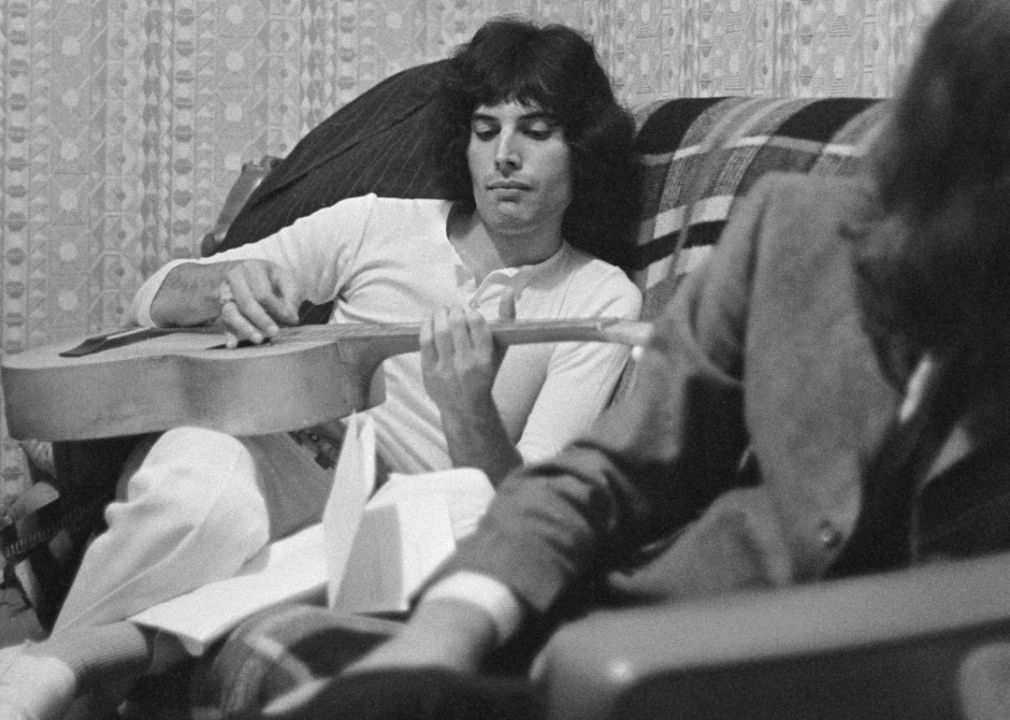 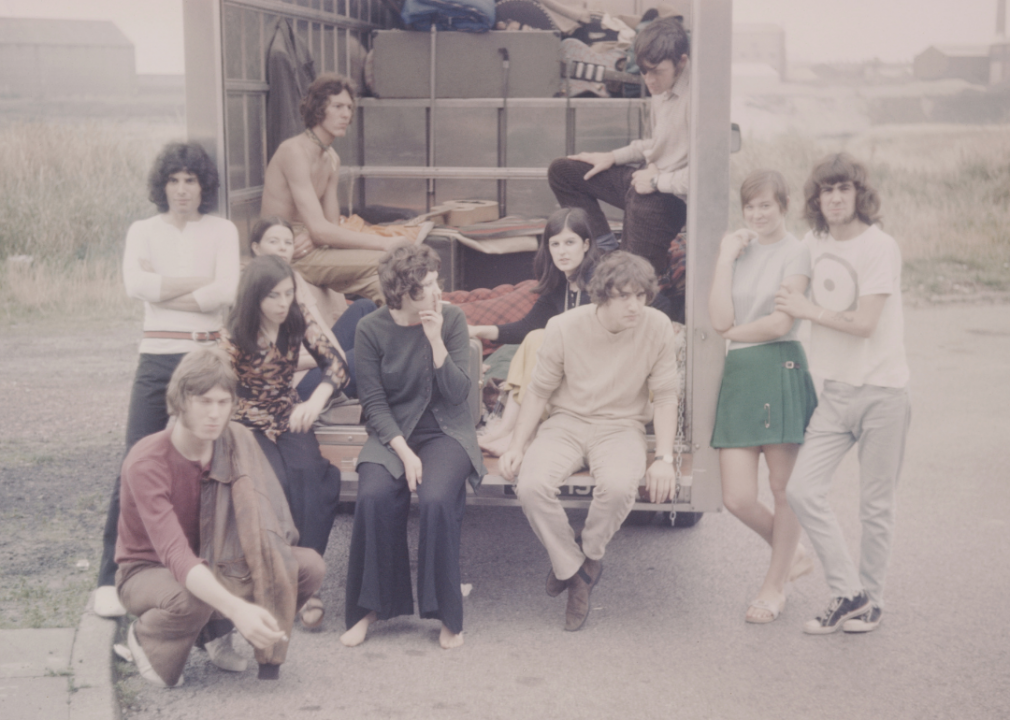 A 12-year-old Mercury formed the band the Hectics in March of 1959. The teenage group covered classic rock ‘n’ roll tunes at a variety of school functions until 1962. Mercury played piano in the band. Pictured here is Mercury with his next band, Ibex. 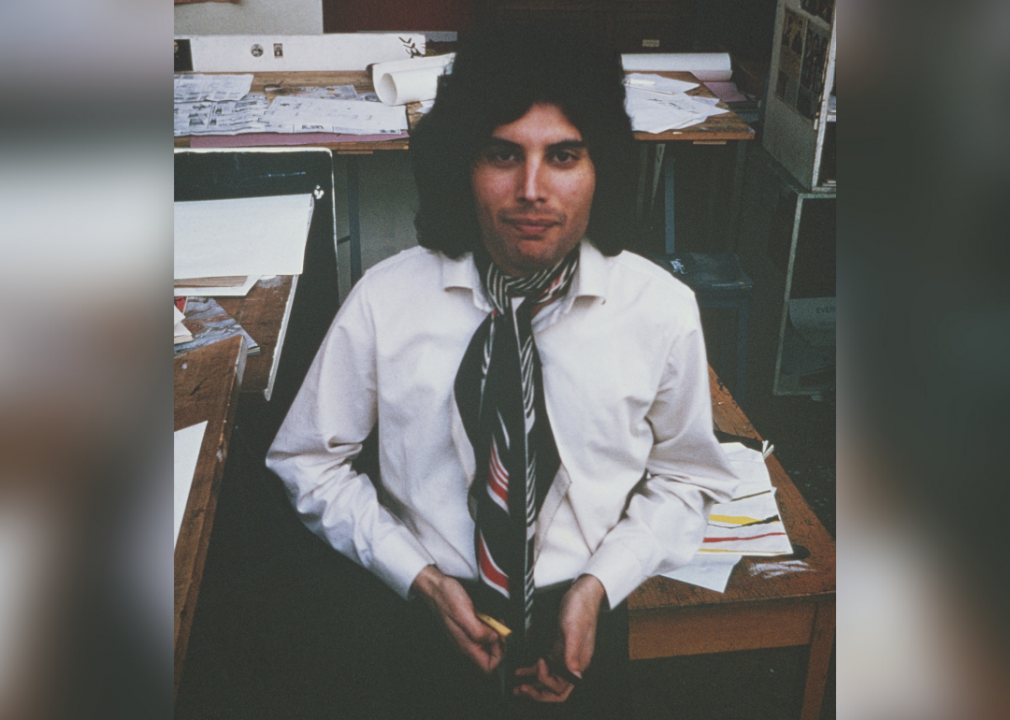 One of rock ‘n’ roll’s famous legends is that of David Bowie and Freddie Mercury meeting while Mercury was still enrolled at Ealing Art College. Apparently, Bowie had a lunchtime gig at the school and Mercury offered to carry musical equipment. At the time, Mercury was earnestly trying to insert himself into the music scene and was known for playing the piano at school or showing up at pubs around town when there were bands booked. The pair met again months later after “Space Oddity” had come out and earned Bowie some notoriety; he was in Kensington Market and found a pair of boots in the stall Mercury was working. Bowie couldn’t afford them; Mercury reportedly gave them to the performer.

Mercury graduated from Ealing Art College in 1969 with a degree in art and design. Twelve years later, the pair famously linked up for 1981’s “Under Pressure.” 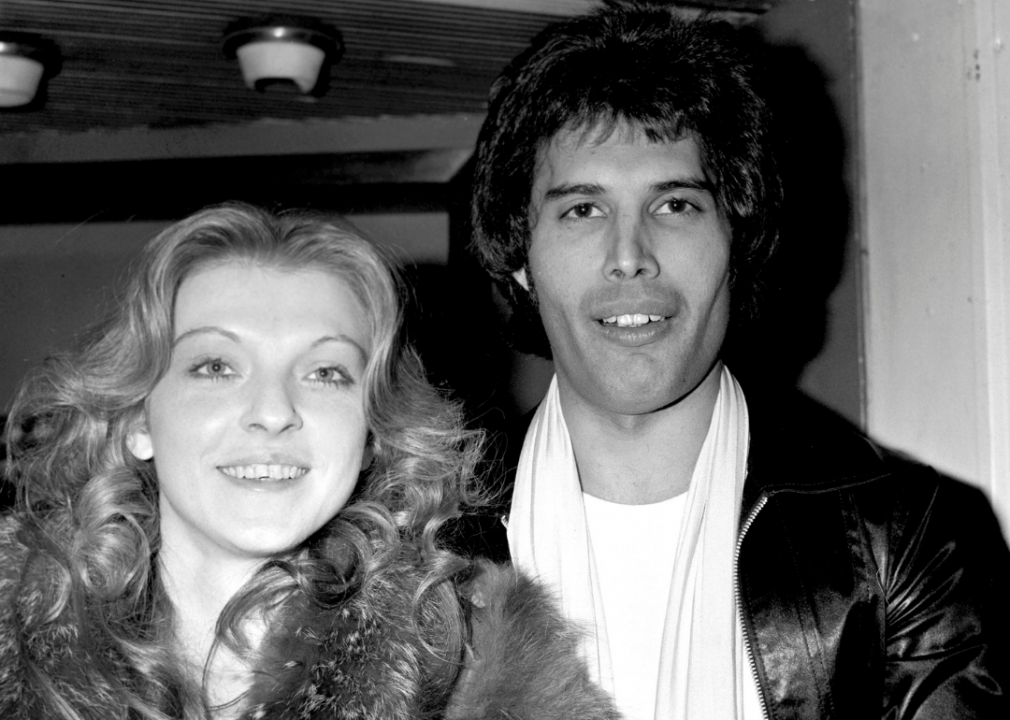 In addition to rubbing elbows with David Bowie in 1969, Mercury met Mary Austin around the same time. The young couple was together for years until Mercury confessed he was interested in men. He came out to Austin as bisexual, to which she recalled responding, “I think you’re gay.” The two eventually split in 1976 but stayed extremely close; Mercury wrote the ballad “Love of My Life” for her. 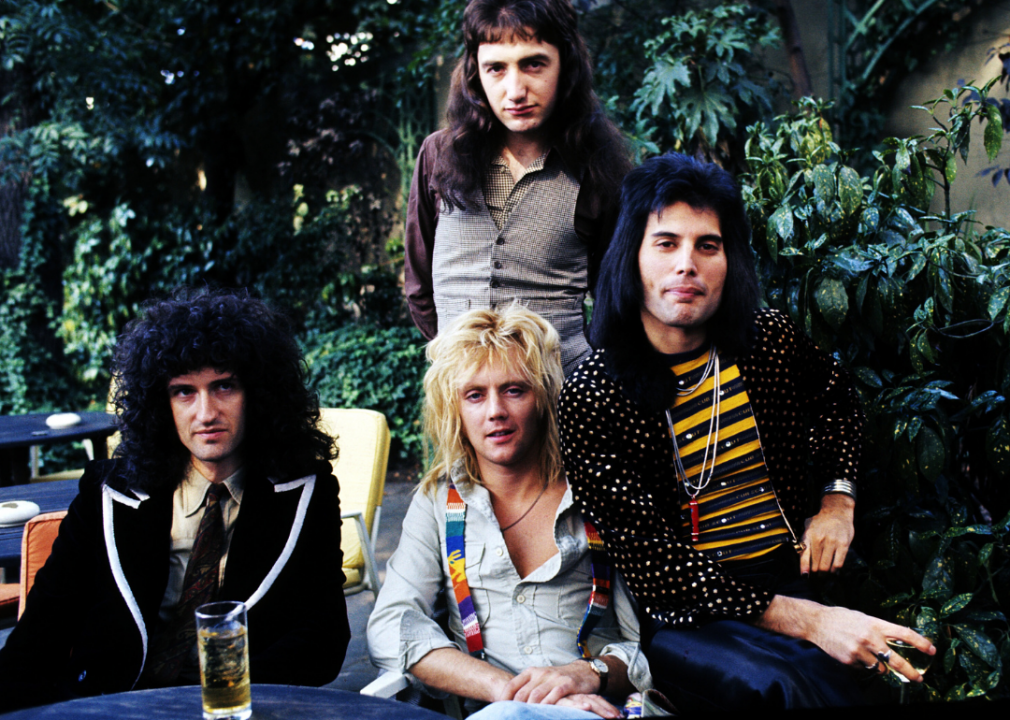 Mercury spent the tail end of his time at Ealing hanging around members of a rock band called Smile, made up of guitarist Brian May, drummer Roger Taylor, and bassist Tim Staffell. In 1970, Staffell left the group and Mercury became the lead singer. Early in 1971, bassist John Deacon joined the band and the four-piece played its first show that year. The group struggled to garner interest from record labels; Queen’s first album—the self-titled “Queen”—came out two years after that and featured classics “Keep Yourself Alive” and “Seven Seas of Rhye.” 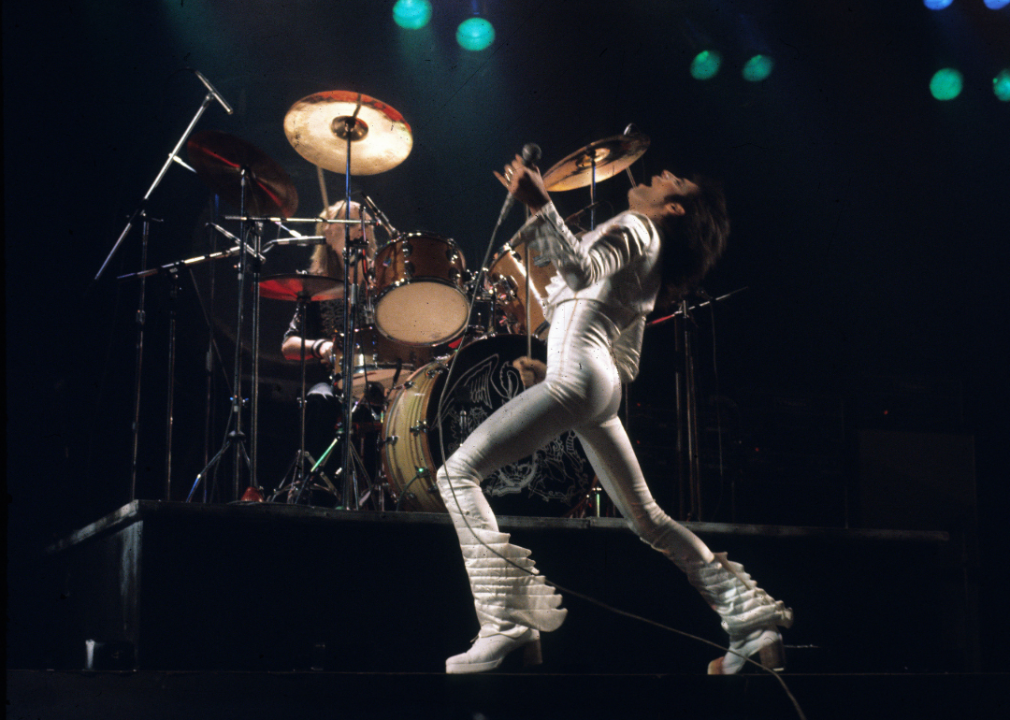 Around the same time Queen got together, Farrokh Bulsara officially changed his name to Freddie Mercury. For years, people misspelled his first name as Freddy. 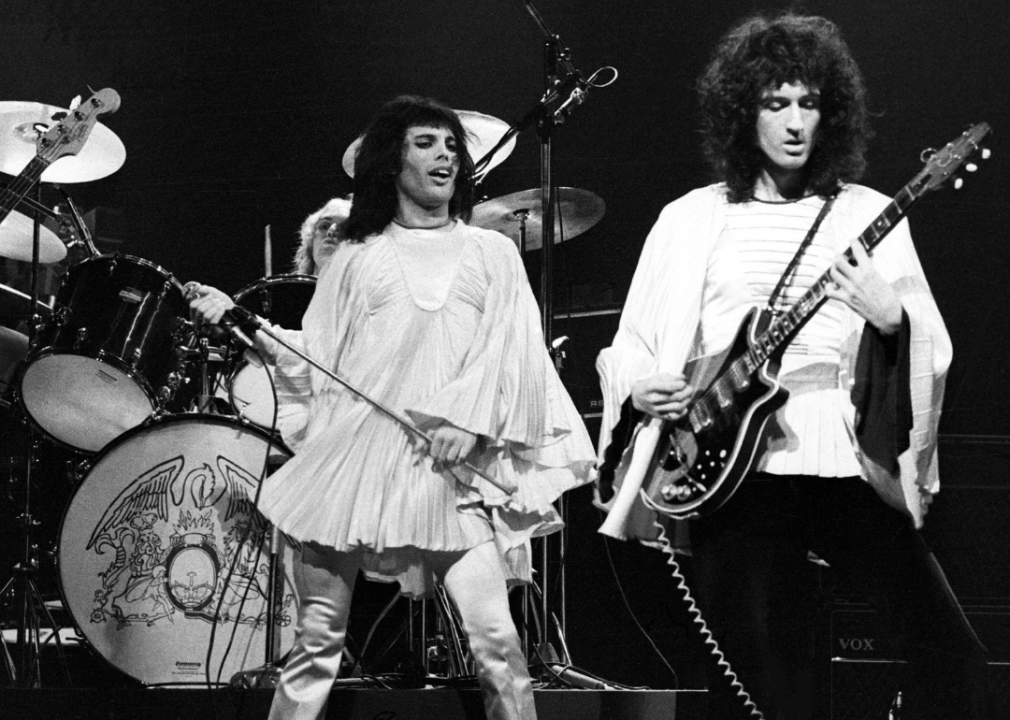 Mercury tapped his art background to design the Queen crest shortly before the band’s first album in 1973. The crest features zodiac signs of the band: a crab for Brian May, Leo lions for John Deacon and Roger Taylor, and a fairy under each lion for Mercury. The phoenix in the back guards the bandmates, and the “Q” at the center? Queen, naturally. 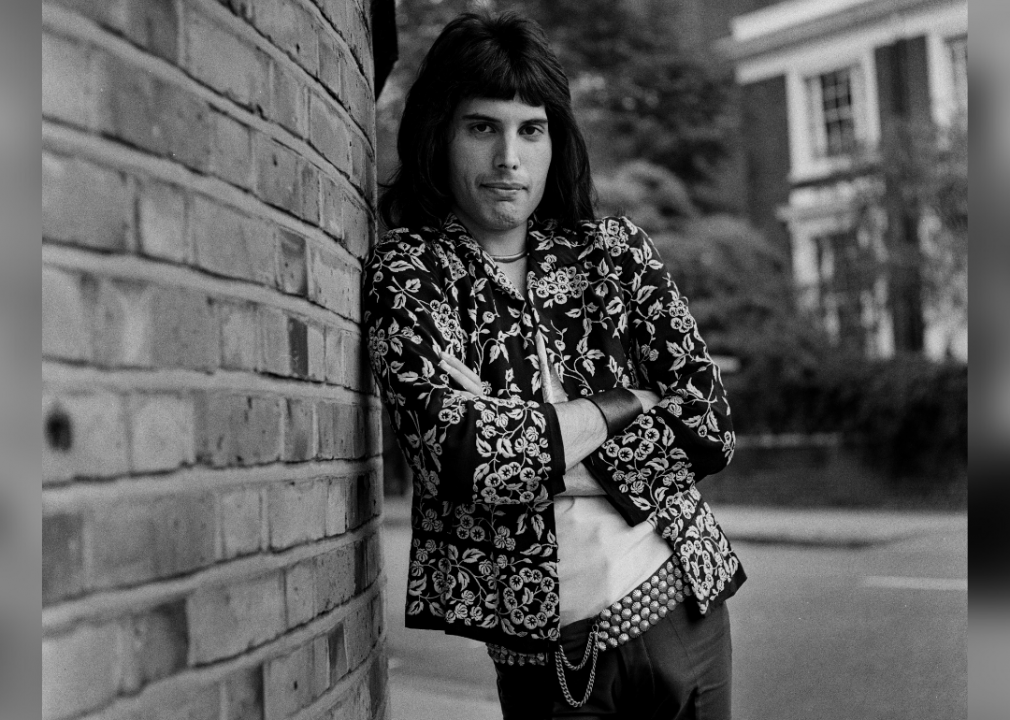 While Queen was recording its first album with Trident Studios, the studio was also experimenting with recreating the “Wall of Sound” Phil Spector was widely using at the time. Mercury was enlisted to record a few tracks and brought in Brian May and Roger Taylor. The “Larry Lurex” name was a riff on ’70s recording artist Gary Glitter combined with the metallic yarn Lurex. Glitter fans didn’t get the joke and the parody bombed.

You may also like: The Rat Pack, Brat Pack, and 20 other celebrity friend groups 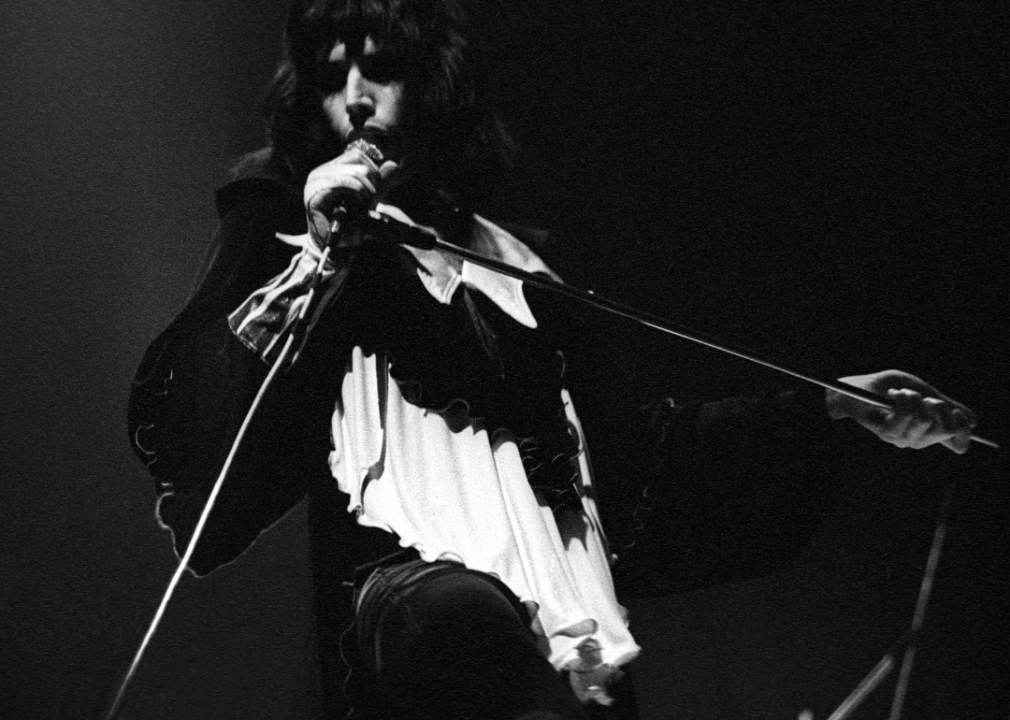 No Queen performance would be complete without Mercury singing into a “bottomless mic” without a stand. The origins of that schtick were apparently accidental. At an early Queen performance, Mercury was in the middle of performing when his mic stand broke. Rather than grab another one, the performer continued singing and began performing in such a way from then on. 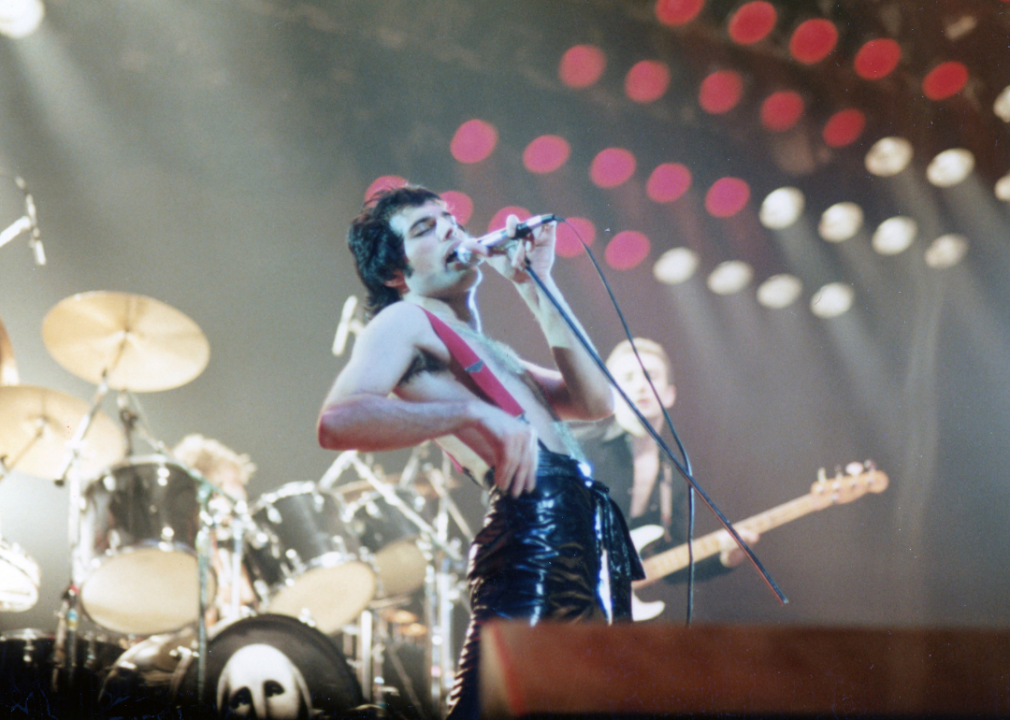 Mercury claimed to have written the famous Queen track “Crazy Little Thing Called Love” while taking a bath at a hotel, having a piano dragged in so he could hammer out the composition. The singer later told British music magazine Melody Maker the tune took him less than 10 minutes to write. 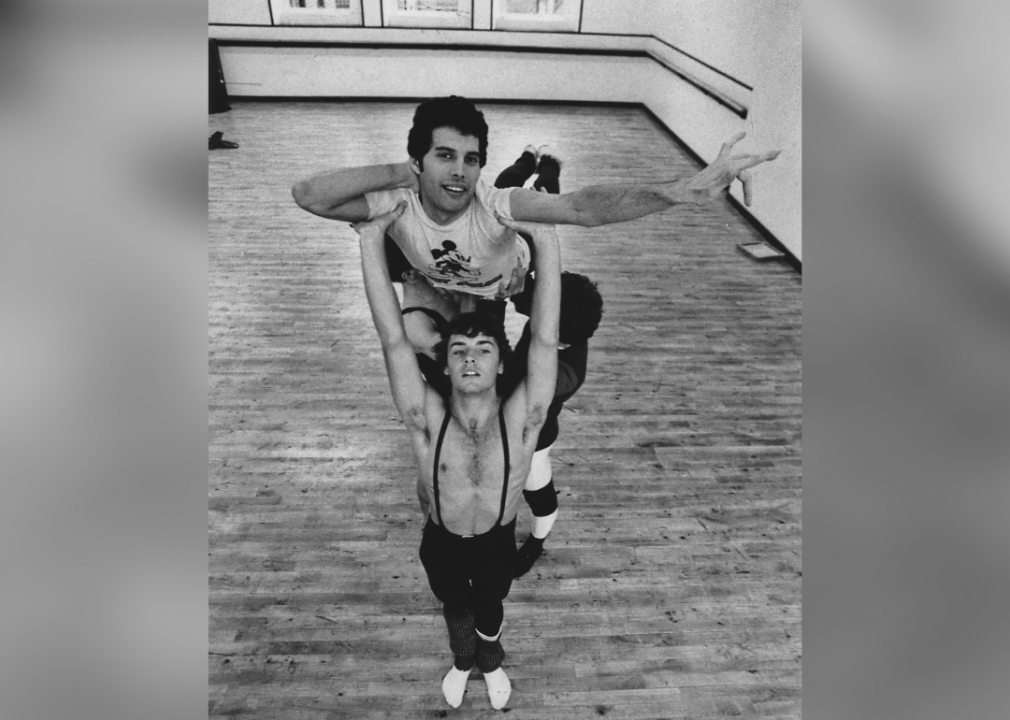 Mercury, who had long been interested in ballet, agreed to make a cameo at a 1979 charity gala for the Royal Ballet in London. On Oct. 7, 1979, the star performed “Bohemian Rhapsody” and “Crazy Little Thing Called Love” at the Coliseum with the Royal Ballet in front of 2,500 people. 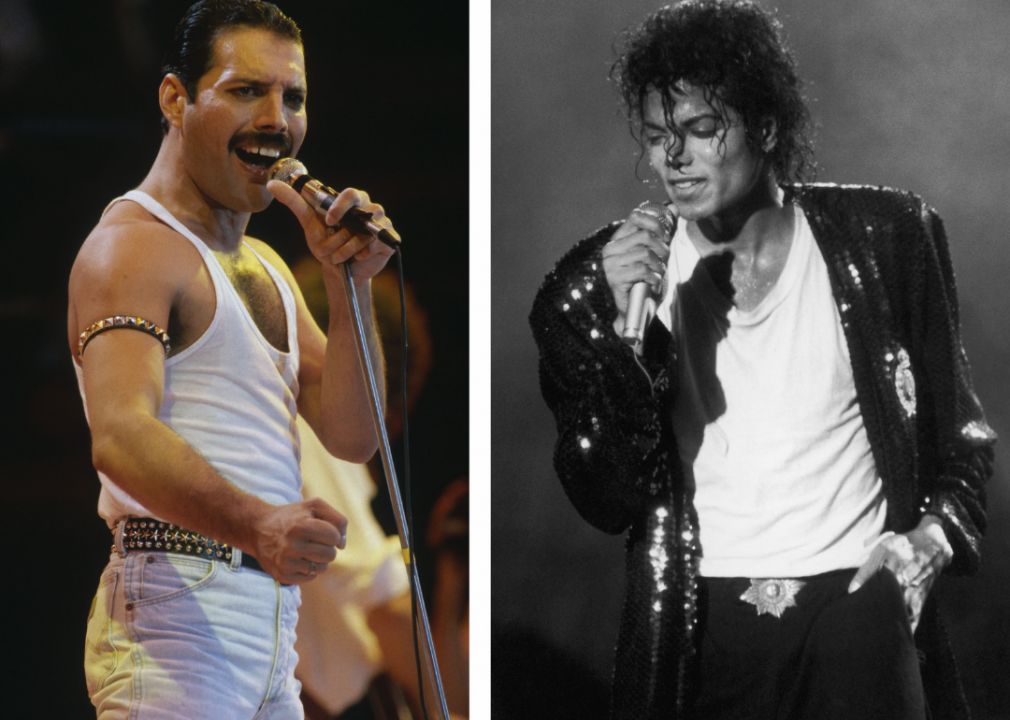 Mercury famously recorded a few tracks with Michael Jackson at Jackson’s home studio in 1983. Just one of the duets—”State of Shock“—was eventually released in 1984. The sessions were the stuff of legend, with both men complaining about one another: Mercury about Jackson bringing his llama into the studio, and Jackson about Mercury using drugs. 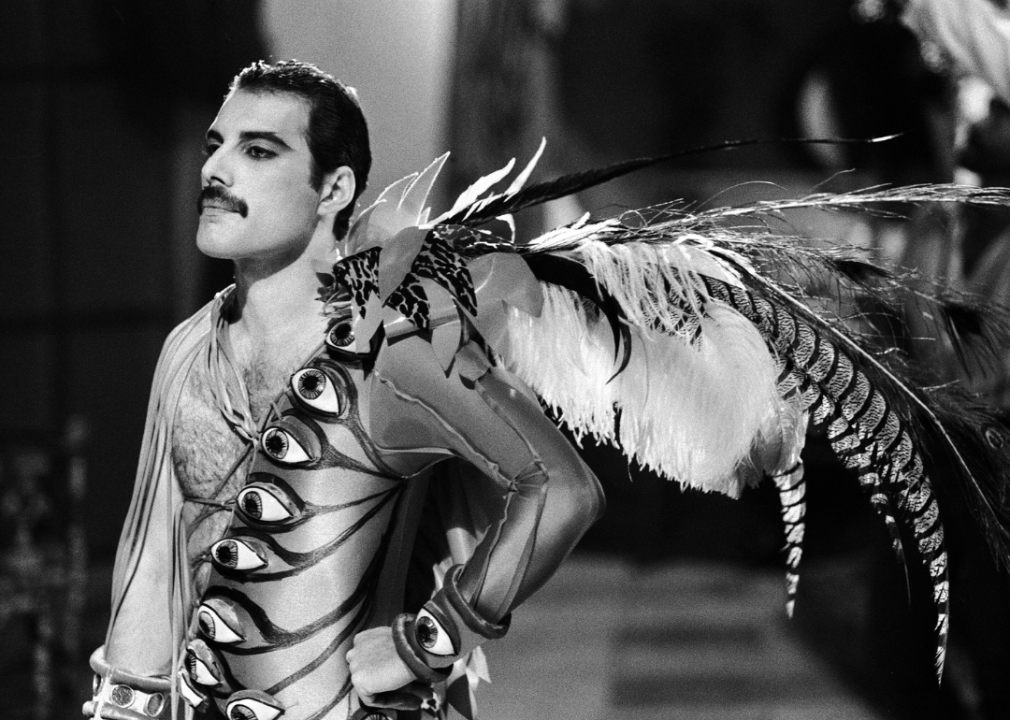 Mercury injured his leg in Munich, allegedly in a fight outside the New York bar there. The star was put into a cast that came off just before the band filmed the promotional video for “It’s a Hard Life.” You can see him favor the bad leg as he sits down on the steps at the end of the video.

You may also like: Most influential celebrities on social media 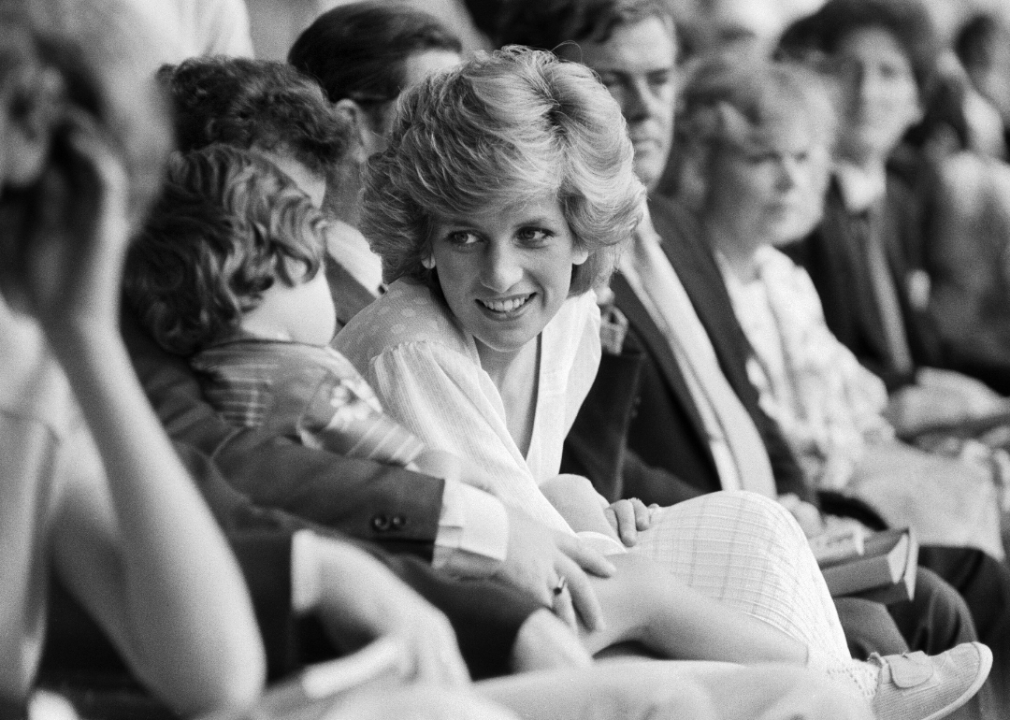 In her 2013 memoir “The Power of Positive Drinking,” actress Cleo Rocos goes into detail about the fabled friendship between Mercury and Princess Diana, who supposedly shared a love of “The Golden Girls.” Rocos goes on to tell a story about the two going clubbing one night in the ’80s. According to celebrity legend, Mercury dressed Diana up in drag and got her into the famed Royal Vauxhall Tavern undetected for a night out. Whether the two were actually close friends remains a mystery. 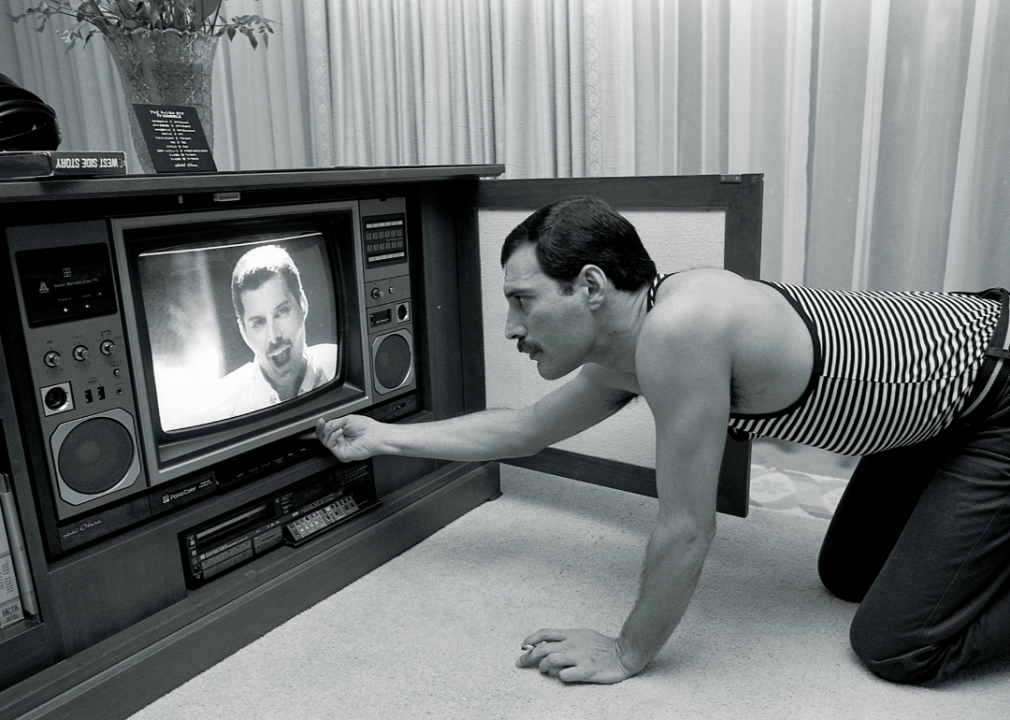 Mercury dedicated his first solo album, “Mr. Bad Guy,” to “my cat Jerry—also Tom, Oscar and Tiffany, and all the cat lovers across the universe—screw everybody else.” The singer was well-known to be obsessed with his cats and even used to call to speak to them from the road. He also wrote the song “Delilah” (off 1991’s “Innuendo”) about his cat. 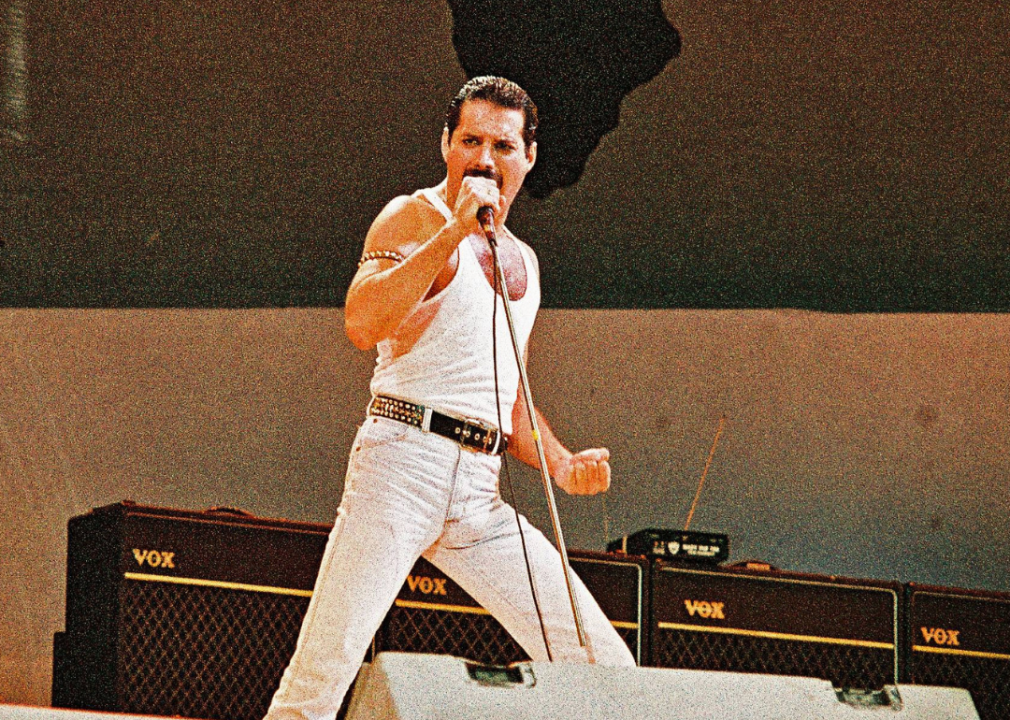 In front of 72,000 live viewers and a TV audience of close to 2 billion, Queen performed at Live Aid in what has since been frequently referred to as the greatest live performance ever. Mercury’s sustained “Aaaaaay-o” during a call-and-response segment with the crowd came to be known as “The Note Heard Around the World.” 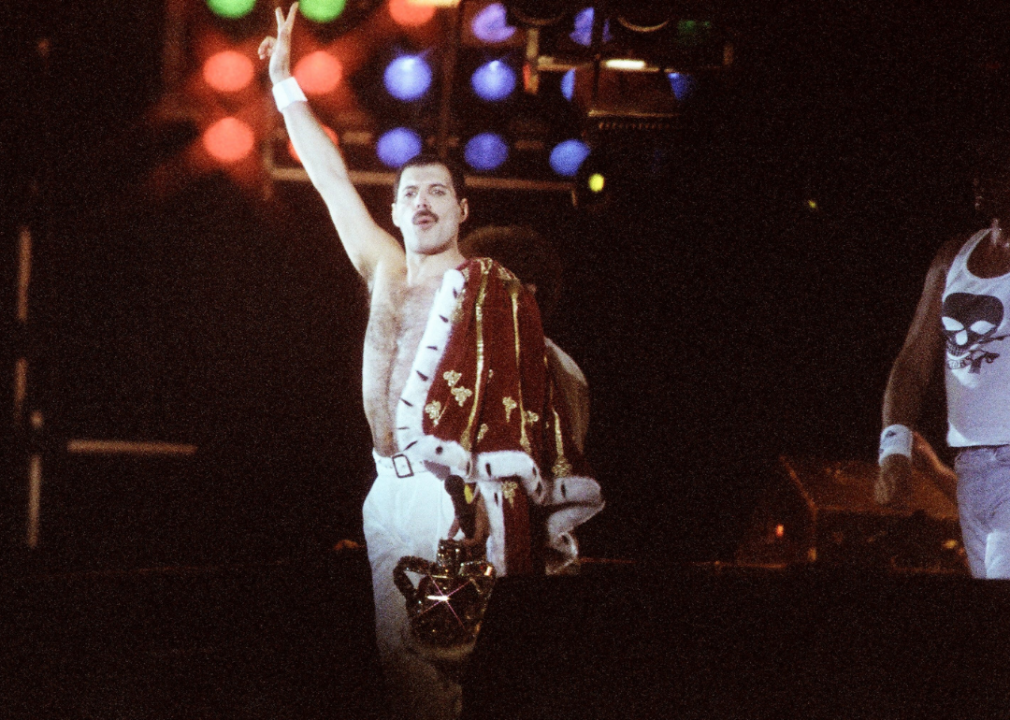 Queen’s final tour brought with it the unforgettable two-night run at Wembley Stadium on July 11 and 12, 1986. The screen hung above the stage was the largest in Europe at the time. The record from that live performance went platinum five times over. 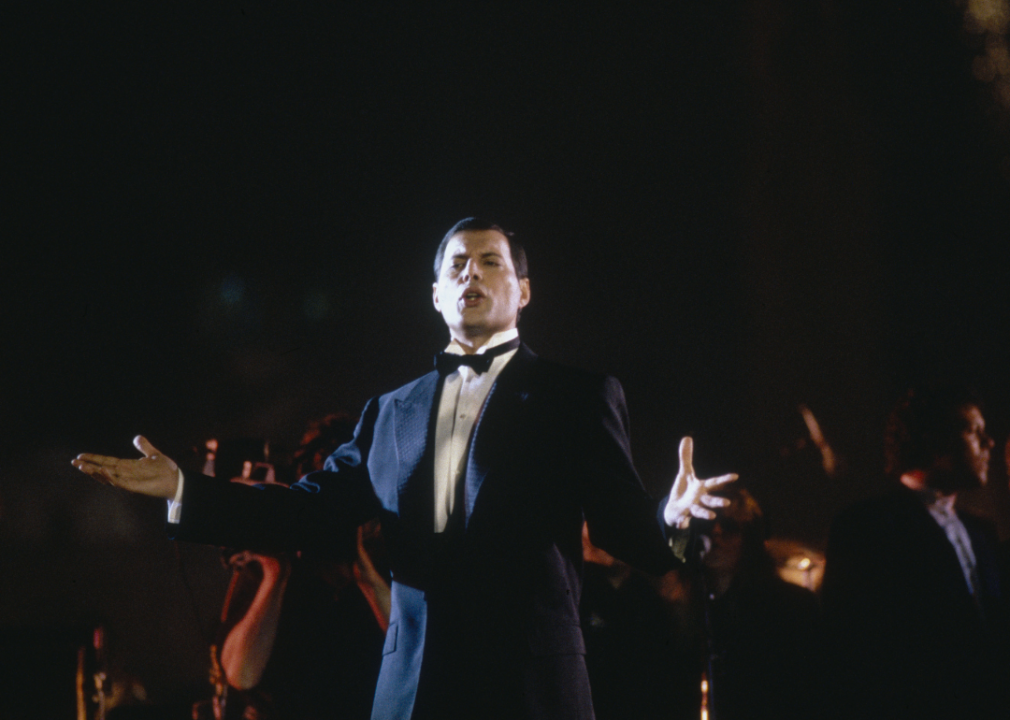 Mercury chose to keep his HIV diagnosis a secret for years. By 1988, fans took notice that the musician appeared unwell.

You may also like: 25 celebrities whose stars were defaced on Hollywood’s Walk of Fame Queen won the BRIT Award in 1990 for Outstanding Contribution to British Music. When Queen took the stage to accept the award, fans watching on television were shocked by Mercury’s sickly appearance. 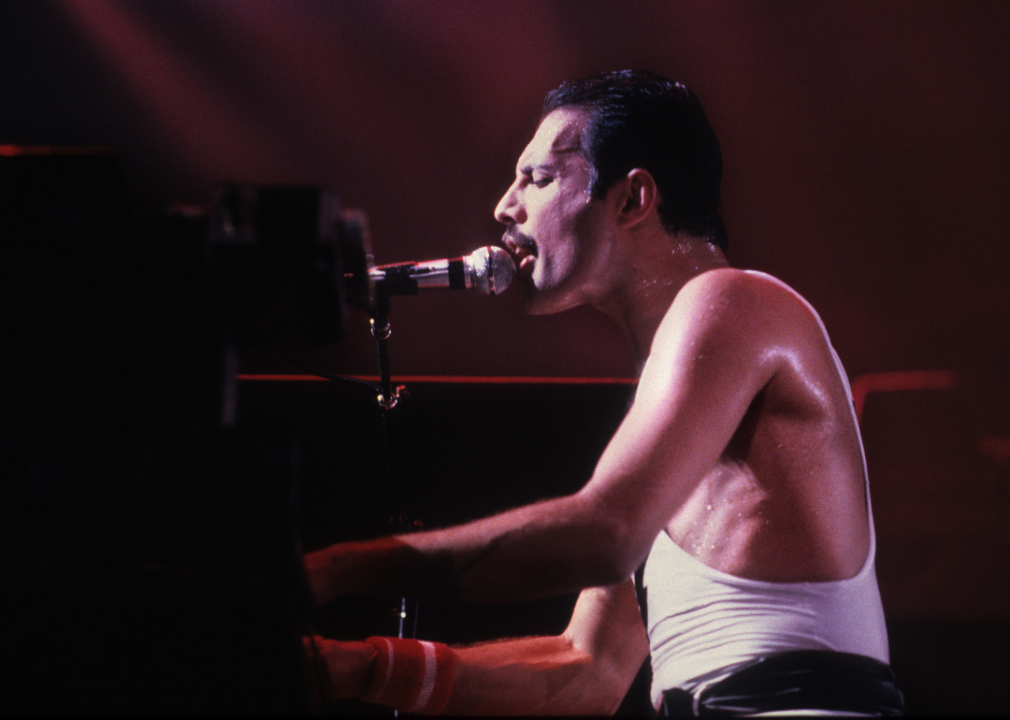 As he grew sicker, Mercury continued to record. Brian May wrote “Mother Love” for Mercury to sing, which he did on the recording while allegedly consuming vodka to help him perform. By this point, the singer was using a cane and unable to stand for extended periods of time. In the track’s final version, May sang the last verse as Mercury felt unable to do so. 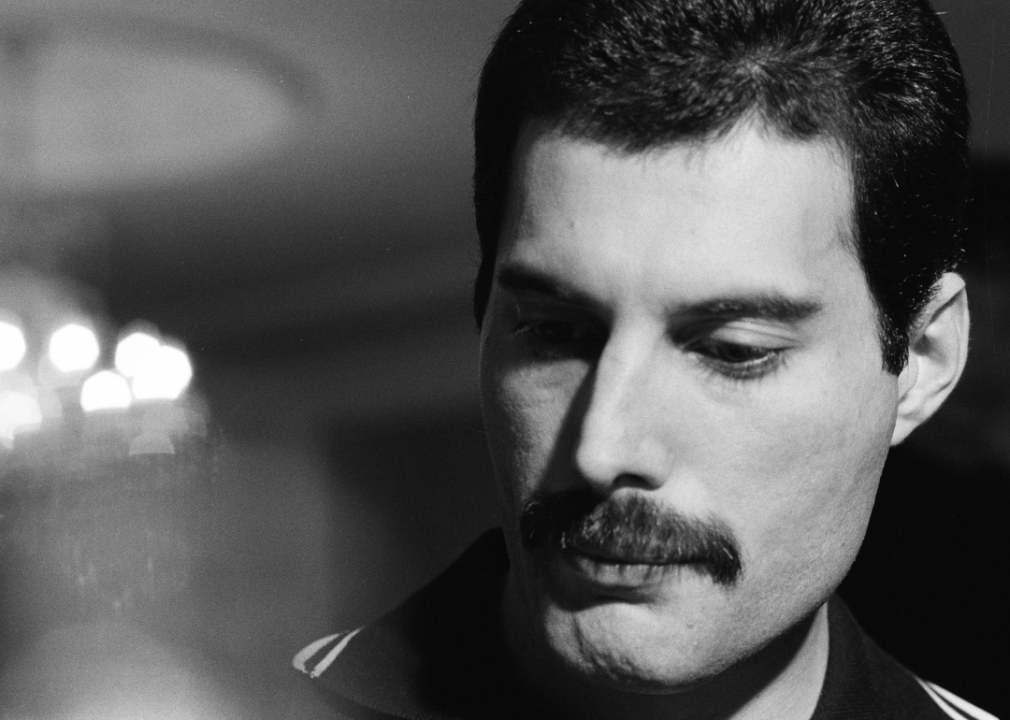 Mercury confirmed his AIDS diagnosis just a day before he died, on Nov. 23, 1991. Many fans were bitter about the timing of the announcement, arguing that sharing the information earlier would have encouraged people to donate to AIDS research and other associated support for prevention and a cure. 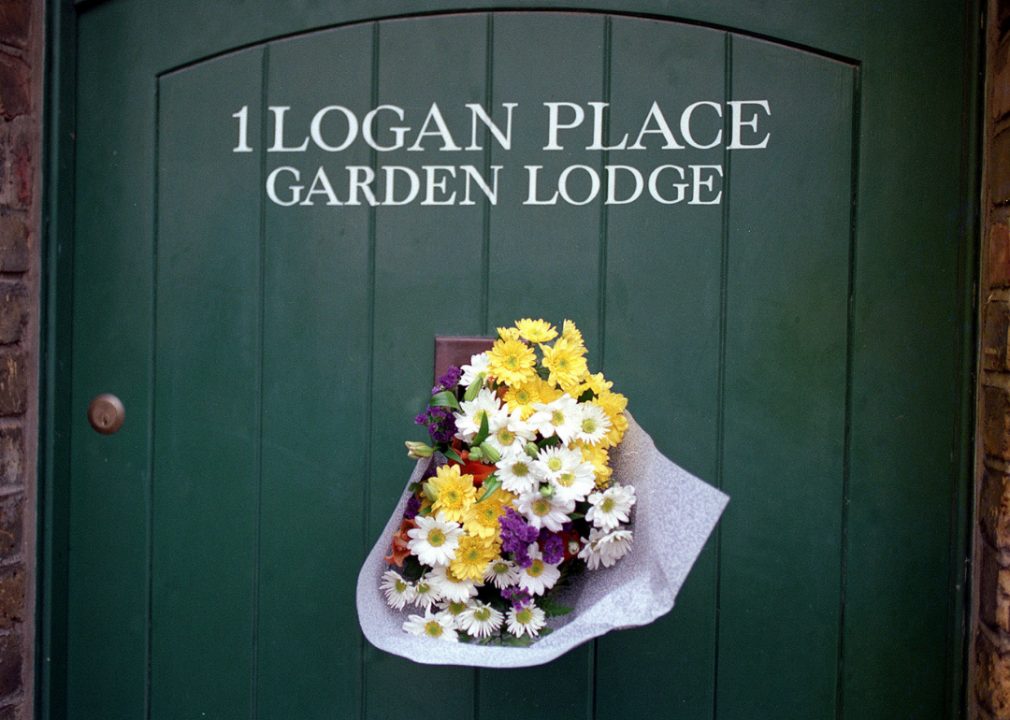 Mercury died of bronchial pneumonia on Nov. 24, 1991. The pneumonia was caused by complications from AIDS. The singer-songwriter was just 45. Mercury’s funeral service was conducted by a Zoroastrian priest. Before he died, Mercury told Mary Austin where he wanted his ashes to be buried; that secret location has still never been disclosed. 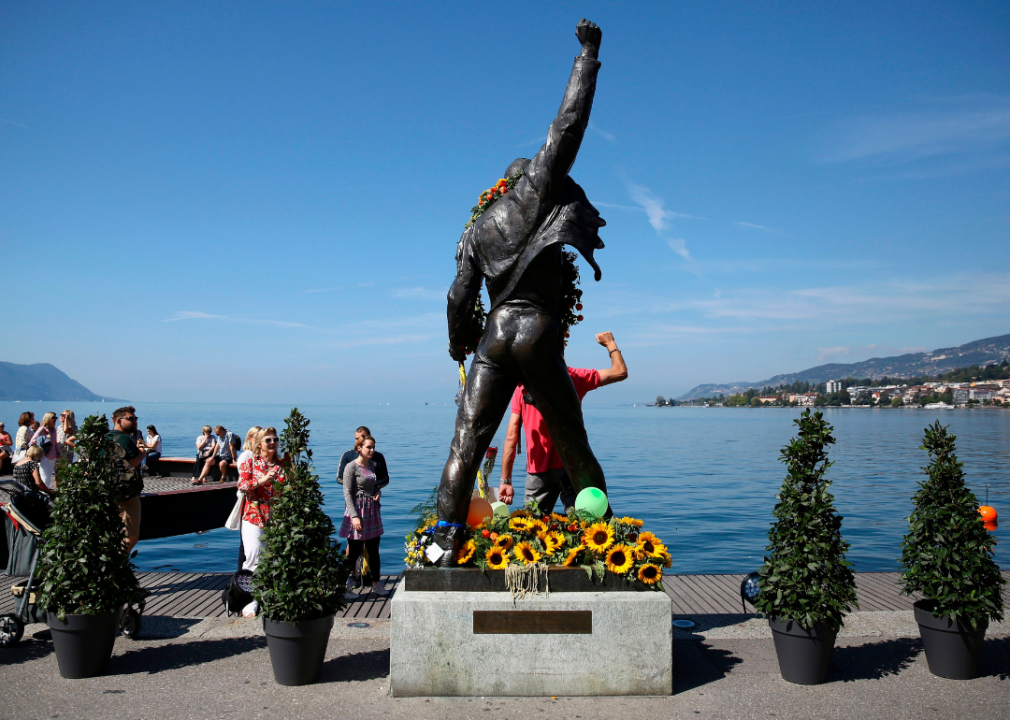 Mercury in 1992 received a posthumous BRIT Award for Outstanding Contribution. In 2001, he and the rest of Queen’s bandmates were inducted into the Rock and Roll Hall of Fame. A flower and an asteroid have also been named after the historic rocker.