Mississippi man wanted for stealing Volkswagen and Black Labrador Retriever. Have you seen him? 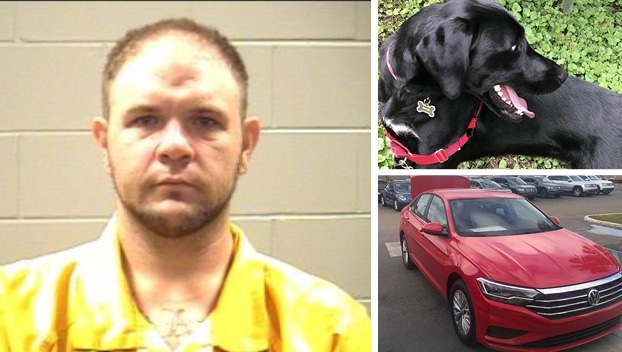 A Mississippi man is wanted in connection with the theft of a vehicle and a Black Labrador Retriever.

The Jackson County Sheriff’s Office is looking for Jeffery Joseph Balius Jr. 33, who is wanted for Motor Vehicle Theft and Dog Theft and by MDOC.

Police say the theft occurred on 8/18/2022 in the St. Martin community of Jackson County.

The vehicle is a 2019, red, Volkswagen Jetta, with MS tag #JGK8090 and VIN #3VWC57BU4KM196237. The vehicle plate has a paw print tag cover around it. The dog is described as a Black Labrador Retriever, named Harley.

Balius is described as a white male, 6-6, approximately 259 lbs, blue eyes, brown hair and has a suspended MSDL.

If you have information on his whereabouts, contact Crime Stoppers by downloading the app, P3 Tips, or by calling 1-877-787-5898.