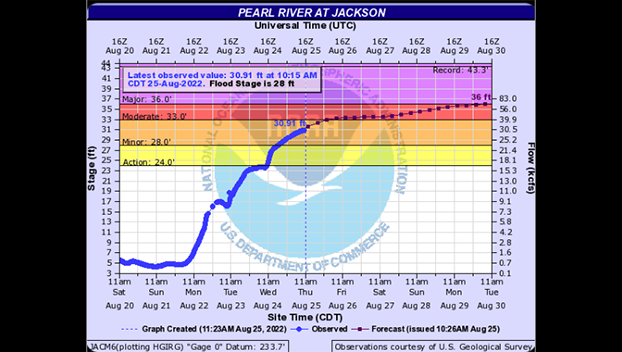 The Pearl River by Jackson surpassed its flood stage Wednesday night, and officials on Thursday afternoon urged those in downtown and northeast Jackson to start preparing immediately.

The National Weather Service expects the Pearl River to crest on Tuesday, which means that flooding could continue throughout next week as the river drops back below the 28-foot flood stage.

NWS projects the Pearl to crest at 36 feet, which would equal the eighth highest peak ever for the river at Jackson. Of the top ten highest peaks, this would be the only one to occur during the summer. NWS also announced that Wednesday’s rainfall made this month the wettest August ever in the capital city’s history.

The Pearl River at Jackson is expected to crest at 36 ft early next week. Flooding of streets will be likely in Jackson and water may begin to approach homes and businesses as we near the crest this weekend into early next week. pic.twitter.com/ceVAMRhY5J

Marty Pope, senior hydrologist with the NWS in Jackson, said the area has seen anywhere between five and 15 inches of rain over the last three days, filling up the upper Pearl River basin and its tributaries. The Tuscolameta Creek, an offshoot of the Pearl, is close to record levels near Walnut Grove, Pope said.

WAPT also reported flooding in Canton for the second time in a month, as well as in Scott, Leake and Rankin counties yesterday.

Those in need of sandbags can call the Jackson’s constituent services at 311 to get them delivered or get them in person on Michael Avalon Street. Mayor Chokwe Antar Lumumba said that information on shelters and which streets may be flooded will be on the city’s website later Thursday.

Mississippi Emergency Management Agency Executive Director Stephen McCraney said the agency is also anticipating impacts to places along the Pearl south of Jackson, including Terry and southern Hinds County, as well as Lawrence and Copiah counties.

MEMA urges anyone who experiences damages to documents those impacts on its self-reporting tool (which can be found at this link) to help receive assistance from the Federal Emergency Management Agency.