Black Fed Ex driver who claims he was followed, shot at while delivering to Mississippi residence says he has received death threat 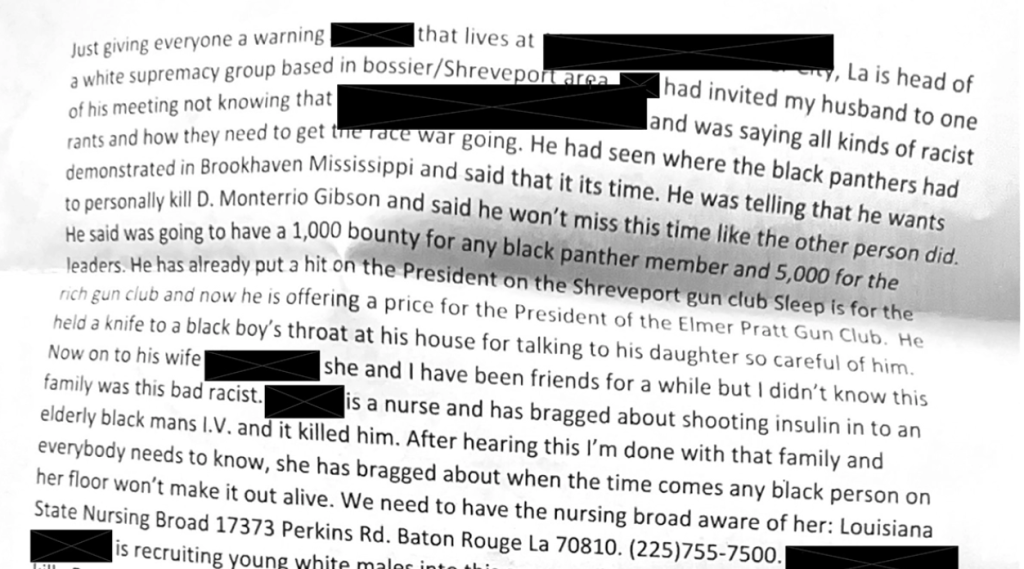 PHOTO COURTESY MISSISSIPPI FREE PRESS D’Monterrio Gibson said he received this letter containing news of a death threat against him.

The FedEx driver who was the victim of a January shooting in Brookhaven says he has received a letter warning him of a death threat.

D’Monterrio Gibson, 24, alleged attempted murder and conspiracy to commit murder against father-and-son Gregory and Brandon Case in the January incident.

On Jan. 24, 2022, Gibson was intercepted by Gregory Case, 58, as he left a property on Junior Trail after delivering a package. Case attempted to block the FedEx vehicle with his own private vehicle. Case’s son, Brandon, 35, allegedly stood in the roadway with a firearm.

After Gibson drove his delivery vehicle past both men, they reportedly pursued him as far as Interstate 55, with the younger case repeatedly shooting into the delivery vehicle.

Gibson, who is black, believes the Cases, who are white, were racially motivated in the attack.

Now, Gibson said he received a letter on July 28, which identified the man who made the threat, along with his Louisiana address, and described him as “head of a white supremacy group based in Bossier/Shreveport area.”

The letter claims the man “was saying all kinds of racist rants and how they need to get the race war going,” and “that he wants to personally kill Gibson and said he won’t miss this time like the other person did.”

Gibson told media that he forwarded the information to the Federal Bureau of Investigation on Aug. 9. The following day, FBI Special Agent Richard Boswell told Gibson via email that the agency was aware of the man.

“The FBI in Shreveport LA is aware of [redacted] and the letter,” Boswell wrote. “Other letters have been received by other individuals.”

“Our office in Shreveport is addressing the allegation,” the email stated.

The letter also mentions the wife of the alleged threat-maker, saying she is a nurse who bragged about killing an elderly black man.

Gibson and his attorney Carlos Moore told Jackson-area media they are frustrated that the shooting case has not yet made it to grand jury, and believe it to be a deliberate effort by the Brookhaven Police Department and 14th Judicial District Attorney Dee Bates.

“I received death threats,” Gibson said. “The victim — who got shot at, didn’t do anything wrong to anybody — and they still don’t want to move my case forward … How did that make sense?”

“We are still awaiting the presentation of the case to the grand jury by the district attorney,” Moore said. “He keeps saying — he’s been saying this for months — that he was waiting on the police department to get him the complete file, and then he’ll present it to the grand jury. I think they are working in concert.”

“There are a couple of things that the Brookhaven Police Department is still trying to obtain. Once they have that and turn over the completed file to us, it will go to the next available grand jury,” DA Bates said Aug. 15.

Every criminal investigation case has to go before a grand jury in Mississippi, Bates said. If the grand jury hands down an indictment, a completed file must be given to the defendant and his or her defense team.

Thursday, Bates said he understands the frustration, but that his office is doing all it can at the present.

“I can appreciate the concern of the victim and his representatives. The District Attorney receives files from the investigative agencies as soon as they finish their investigations, and we turn them over to the grand jury,” Bates said. “We would never prevent a speedy conclusion because defendants have constitutional rights and victims have concerns. We would never purposefully delay any case. We would like to reach a conclusion as soon as humanly possible. We are seekers of truth and justice and looking for an equitable conclusion on every case where justice can be served.”