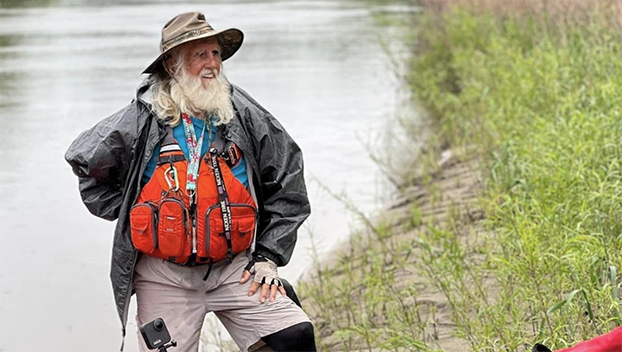 He rubbed his eyes. Initially, the thought was he was tired.

But after further observation, it was clear that 87-year-old Dale “Greybeard” Sanders was dabbing away tears as he recollected on the past seven years of his life.

Since 2015, Sanders began chasing and setting records as the oldest man to achieve insurmountable feats and this past Saturday he made a stop in Vicksburg while on his way to becoming the Guinness Book of World Record’s oldest person to paddle down the Mississippi River, a record he previously held.

It was during this stop and after sharing a story about a woman he met while in a competition to cross Minnesota’s Lake Pepin, that Sanders became emotional.

“It’s (Lake Pepin) a very difficult lake to get across. It’s big and the wind blows. We were trying to get out one morning,” Sanders said.

But because of the wind, he said he and his crew had been forced to wait it out for a more opportune time.

And because of the delay, the woman, who Sanders said was always a day behind him, was able to “catch” him and in doing so shared with him how he had impacted her life.

The woman, Sanders said, told him she had been in an accident and had sustained a severe back injury; so severe that the doctors told her she would never walk again and would need a wheelchair to get around.

But after seeing Sanders at 80 years old and paddling down the Mississippi River, the woman told him she decided to rethink her dire diagnosis.

“She said she told herself, ‘I am going to do what he is doing. I am going to work, and I am going to start walking again,’” Sanders said. And because she “put her heart into it and lived it, ate it and slept her recovery,” the woman said it had only been a matter of months before she was walking again.

“And I cried. I couldn’t hold back the tears,” Sanders said.

“Most people think you are going to die if you get out there in a small boat and paddle the Mississippi,” Sanders said. “I have had so many people tell me if I paddle it, I am going to die.”

But if one uses “good common sense,” Sanders said, paddling in a small boat — like his 15-foot canoe — can be enjoyable.

“It is not the monster river that everybody says it is. It’s a pleasure and surprisingly comforting to paddle,” he said, adding the Mississippi River has some of the most “outstanding” sand bars in the world.

And while there is beauty and comfort in Old Man River, that doesn’t mean you don’t have to be aware of the surroundings. The Mississippi River has sand boils and, of course, river traffic.

For Sanders, he said, “Barges break up the routine and if you stay away from them, they will stay away from you because they can’t move very fast either.”

However, because he does not wear his hearing aid while in the water, Sanders said he does look behind often since he cannot hear engines downriver.

Also, as a safety measure, Sanders has film crews traveling along with him as well as Dan Faust, Matt Briggs and Iraq War veteran Matt Taylor.

Both Taylor and Sanders stayed the night at the home of Paul and Donna Ingram, who are on the River Angels’ list to provide assistance to paddlers along the Mississippi.

Taylor, who called Sanders one of the last great explorers, said, “It is an honor” to travel with him.

In 2016, Sanders became the oldest person to ever complete the Missouri American Water MR340, which is an endurance race across the state of Missouri.

Sanders said only about one-third of the competitors finish the race.

“But I finished it at 81 it and became the oldest person to complete the race without getting kicked out because of time. In other words, I stayed awake for 82 hours, basically. Because if you stop to sleep you are not going to make the time,” he said.

In 2017, Sanders completed a “Thru-Hike” on the Appalachian Trail and holds the record as the oldest person to ever hike the full 2,190 miles.

In 2018, Sanders said he took a vehicle trip and followed the Louis and Clark trail all the way from St. Louis to Portland, drove down the Oregon coast and then returned home.

“That’s no record,” he said, but he admitted the Oregon Coast is one of his favorite places to be.

In 2019, Sanders hiked the Florida National Scenic Trail/Florida Trail and holds records of being the oldest man that has done both.

In 2020, Sanders earned a Guinness Record when he became the oldest man to do the Rim to Rim to Rim — R2R2R — which is a hike from the south ridge of the Grand Canyon to the north ridge and back.

In 2021, Sanders said he had planned to hike the rest of the Eastern Continental Trail, which would have started at the northern end of the Appalachian Trail and ended at Belle Isle, Newfoundland, but due to COVID-19, Canada had closed its borders.

It is the joy he has experienced, like the story Sanders shared of the woman, and it is the gratification in knowing he has had a positive impact on others’ lives that keeps him going.

“It’s nice to get a Guinness Record. It’s nice that I have two professional film crews following me (during his 2022 trek down the Mississippi River), but the number one reason why it’s satisfying for me to do every single one of these age records that I have done is because of how many times that I have been told, ‘I want to be just like you when I get old or your age’ or something like that,” Sanders said.