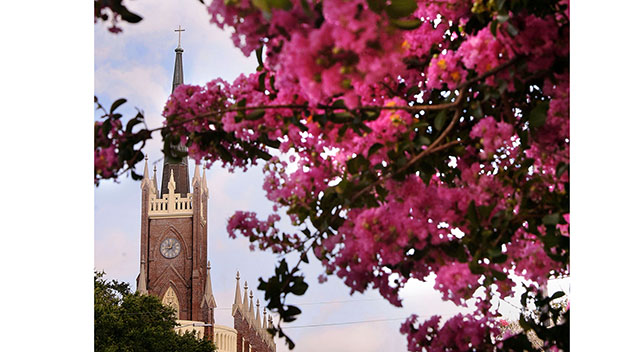 The Rev. Aaron Williams, rector, said the church has nine lightning rods around it to prevent such a phenomenon from happening. It’s unclear if the lightning was directed through the church from a strike somewhere around it, such as one of the structures in Memorial Park, or if one of the rods failed, he said.

The damage to equipment inside the church and the rectory was extensive.

“My secretary’s computer was fried, the copier was fried, both of which we just had to throw away,” he said. “The unit that runs the sound system was totally fried but luckily the microphones and wiring are all fine so we’ve rigged it up so that it works but we’re going to have to replace that whole system. We’ve been having to manually force the air conditioner to run but the control panels don’t work. The bell tower is really acting crazy. It will ring some of the programmed stuff but sometimes the screen will say it’s ringing when it isn’t. It’s a 20-year-old system so we may just need to replace it.”

Regularly scheduled Masses continue at St. Mary’s, however, the church is unable to live stream those Masses until the damaged technology is repaired.

Williams said a rough guess of the cost of the damages could be $150,000. However, he is not worried about the church having the funds to make repairs. When the church flooded due to leaks after the February 2021 ice storm, Catholic Mutual insurance covered the damages well, he said.

“They nearly covered all of it then so I’m not worried,” he said. “We’ve actually had a few people within the church offer to donate. It’s more of a headache than anything else.”

One of the main concerns from the lightning damage is the sound system and repairing or replacing the church organ, which can be a $1.3 million instrument to replace but has a long lifetime.

“The organ is like 140 years old to begin with and was electrified in the ‘50s. It had a little work done on it recently, but some of the pipes now are just screaming,” Williams said. “We had to pull the pipes out and can’t play them right now because otherwise, they would just sound the whole time. Other pipes are not responding. Because the church was so hot with the air conditioning not working and the pipes are made of lead, some of the pipes are out of tune.”

The only visible, non-electrical damage from the lightning strike is scorching along the wall around one of the church’s main breaker boxes underneath the church tower.

“We’re hoping (this week) the insurance adjuster will come out and do a full assessment of the church. We keep noticing more damages,” he said.

Under the circumstances, Williams said he chooses to look at this as an opportunity to update old equipment.

“Anything that we do, we’re going to do in the way that it should be done now,” he said.